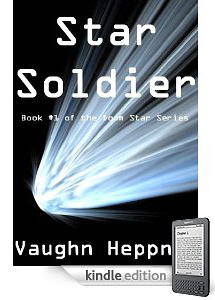 Star Soldier by Vaughn Heppner, Book #1 of the Doom Star Series, has reached the Top of Amazon’s bestseller list for Series Science Fiction in its Kindle edition.

Number 2 on the list is the second volume in the series, Bio-Weapon — outselling Dune, Foundation, and Orson Scott Card’s Ender series, among many others. In the general Science Fiction Bestsellers list for Kindle editions, Star Soldier reached #2, second only to the brand new Zero History by William Gibson.

Star Soldier is a full novel, 82,000 words in length, and is available for download for just 99 cents.  Here’s the description:

It’s survival of the fittest in a brutal war of extinction! Created in the gene labs as super soldiers, the Highborn decide to replace the obsolete Homo sapiens. They pirate the Doom Stars and capture the Sun Works Ring around Mercury. Now they rain asteroids, orbital fighters and nine-foot drop troops onto Earth in a relentless tide of conquest. Marten Kluge is on the receiving end. Hounded by Thought Police, he lives like an ant in a kilometer-deep city. The invasion frees him from a re-education camp but lands him in the military, fighting for the wrong side. Star Solider is the story of techno hell in a merciless war, with too many surprises for any grunt’s sanity.

Vaughn has sold three really terrific linked Sword and Sorcery tales to Black Gate, the first of which, “The Oracle of Gog,” will appear in our next issue.  I asked him to tell us a little bit about the novels:

In many ways Star Soldier is based from my years of reading about the Eastern Front during WWII. Social Unity is like the Soviets. The genetic super-soldiers think like Nazis. Marten Kluge, the hero, just wants to be free. But there is precious little freedom in the Inner Planets of the Solar System in 2350… I’m writing hard these days. I’m working on the third book of the Doom Star Series, Battle Pod.

[…] contributions from Black Gate stalwarts such as Contributing Editor Bill Ward, Vaughn Heppner (our man!) and Euan Harvey,  as well as Matthew Wuertz, James Lecky, Jeff Crook, and many others. You can […]

[…] Heppner’s tales of Sword & Sorcery will appear in Black Gate 15, 16, and 17. His Doom Star novels are currently the top-selling books in Series Science Fiction at Amazon.com, outselling […]

[…] month we reported that Black Gate author Vaughn Heppner had cracked the bestseller list at Amazon with Star Soldier, […]

[…] C.S.E. Cooney to C.L. Moore; Bud Webster’s advice on book selling; which Black Gate author reached #1 on Amazon sales list; which BG staffer interviewed his own daughter, and a road trip to clone a […]