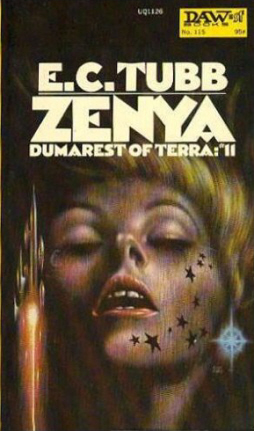 Tubb published his first novel, Saturn Patrol, in 1951.  Thus began an extraordinary career spanning nearly half a century, and including over 130 novels and more than 230 short stories in magazines such as Astounding/Analog, Galaxy, Nebula, Science Fantasy, and many others. His short story “Little Girl Lost” (1955) was adapted for Rod Serling’s Night Gallery TV series in 1972.

While Tubb received acclaim for much of his early work, including his novel of Martian colonization Alien Dust (1955), and his generation-Starship novel The Space-Born (1956), he is remembered today chiefly for his Dumarest of Terra saga, which began with The Winds of Gath in 1967 .

DAW publisher Don Wollheim commissioned the series, featuring star-hopping adventurer Earl Dumarest and his relentless search for the legendary lost planet of his birth: Earth. The worldwide success of Dumarest of Terra led Tubb to switch almost exclusively to novel writing. Following Wollheim’s death in 1990, Dumarest came to a premature end after 31 novels with The Temple of Truth (1985).

The next novel, The Return, existed for years only in French translation, until it finally appeared in English in 1997 from Gryphon Books.  The ending of The Return was inconclusive however, and it was not until 2009 that Tubb,  at the urging of his agent (and at the age of 90!), wrote the volume that brought Dumarest of Terra to a true conclusion: Child of Earth  (Homeworld Press, 2009).

Later collections of Tubb’s short fiction include The Best Science Fiction of E.C. Tubb (Wildside, 2005) and Mirror of the Night (Sarob Press, 2003).  In recent years, and despite failing health, Tubb continued to write and publish, including the first two novels in his sword & sorcery Chronicle of Malkar series, Death God’s Doom (1999) and The Sleeping City (1999), both from Prime; the Space:1999 novel Earthbound (2003), and three novels in the Linford Mystery Library. His dystopian novel To Dream Again was accepted on the day he died, and is scheduled for publication by Ulverscroft in 2011. At least one other new novel, Fires of Satan, is rumored to be under consideration

I admit I’ve never read any E.C. Tubb — his heyday, the early 1970s, was a bit before my time.  But he was a fixture on science fiction bookshelves in virtually every bookstore I walked into for over twenty years, as ubiquitous as Asimov, Heinlein, and Frank Herbert. His passing feels like the end of an era.

I’m sorry to hear that, and enjoyed reading the few paperbacks I found of his. Awesome he continued writing into his nineties.

E.C. Tubb passed away « the scroll of gnom-bientus

[…] Tubb passed away Last night I read on the Black Gate blog that Edwin Charles (E.C.) Tubb, a prolific author best known for his Dumarest of Terra series […]