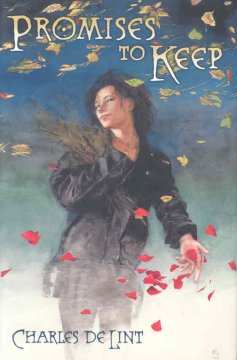 Charles de Lint has become one of the big names in the worlds of Urban and Mythic Fantasy, and for good reason. At its best, his stories are beautifully crafted. They capture both the wonder of the everyday and the sheer strangeness of the otherworld that can intrude into our own. A key aspect of his work has been his creation of Newford, a fictional North American city. De Lint has, over the last twenty years, filled this city with a cast of characters that have by now become familiar friends to his readers.

Jilly Coppercorn is one of those characters, and she is central to many of his novels and short stories. In Promises to Keep, one of the latest entries into the Newford series, we learn more of Jilly’s troubled history. We know from her previous appearances that Jilly is a survivor of sexual abuse and a recovering addict, that she lived for a time on the street, and that she escaped that life to become an artist. Promises takes us back to that fragile time in Jilly’s life when she first escaped heroin and forced prostitution and began the long process of healing. 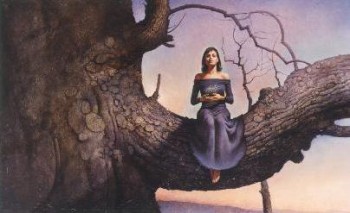 Through the help of a freelance social worker Jilly has found a job and begun to build a new life for herself. Sobriety is a constant struggle, but she is making it. She has gotten her high school diploma, she is taking classes to work towards an art degree, and she is holding down a steady job. She is building new relationships that help to anchor her in her new life.

Then, one Halloween, she runs into an old friend from the bad old days.

Anyone acquainted with addiction and recovery  knows how dangerous this can be. Substance abuse isn’t just about the drug of choice, after all: it is also everything that comes with it. When you’re an addict, many of your friends are addicts. Staying clean usually requires a complete break with those who are still using.

The good news is that Donna has, like Jilly, been sober for some time. The bad news, we come to find, is that she offers an entirely different kind of temptation. She invites Jilly to come and live with her in Mireya, a city of second chances. Mireya is a city in which those who died too soon and those who never got a fair shot in the first place get another pass at life. Jilly has the opportunity to build a new life here and leave her past behind her. But it also means leaving the life she has struggled so hard to create on her own. She also finds that in Mireya, as everywhere, nothing comes without a cost.

Promises to Keep is solid but ultimately disappointing.

It does work as a stand-alone novel, and those wishing to dive into de Lint’s work can start here easily. What makes de Lint stand out in both Urban and Mythic Fantasy is the seamlessness and originality of his storytelling. He is able to make Jilly’s descriptions of her time at the community college and her job at a diner both as realistic and as magical as the time she spends in a city where you can see Buddy Holly play on Saturday night. Jilly’s voice is strong and genuine, and here as in her other appearances she is engaging.

She is also a rare character in modern fiction. Stories about former addicts and sexual abuse survivors are plentiful in genre fiction, especially Urban Fantasy. But it’s usually part of their background. A history of abuse or alcoholism may be used to give ‘depth’ to a character, or to explain parts of their personality. But we rarely see it as something that is still grappled with, something that still affects someone who is nevertheless thriving. We like broken characters, and we like triumphant survivors who overcome adversity. But we rarely see someone who is neither.  Here we see that process happen, and de Lint does an excellent job of making us both sympathize with a character who is struggling while we are able to celebrate her successes. He neither condescends to Jilly nor lionizes her, and it makes Promises to Keep truly refreshing.

But it is far from his strongest work. While the novel fleshes out a period of Jilly’s life we haven’t seen yet, we also do not learn anything fundamentally new. Emotionally, it goes over terrain that de Lint has covered, and covered more effectively, before.  And while its lessons – that a truly meaningful life has to be built by hand, that everything comes at a price, and that our baggage both weighs us down and makes us who we are – are worthwhile and common ground for the genre, here they were predictable and, at times, heavy handed.

For fans of Charles de Lint, and Jilly Coppercorn, Promises to Keep is an opportunity to spend more time with an old friend. But if you’re looking for an introduction to de Lint and his usual strengths, I would recommend starting elsewhere.