Joe Dever started playing Dungeons and Dragons in 1976, barely three years after the first copies appeared in game shops in Lake Geneva. In 1984 he published his first Lone Wolf solo fantasy game book, Flight from the Dark; it became an international bestseller and launched a publishing phenomenon. By Dever’s death in 2016, the Lone Wolf series had been translated into 18 languages and sold over 12 million copies.

Unlike most other fantasy solo gamebooks — such as Steve Jackson and Ian Livingstone’s classic Fighting Fantasy titles, Steve Jackson’s fabulous Death Test and its sequels, Tunnels and Trolls adventures like City of Terrors, George Dew’s excellent Legends of the Ancient World, and others — the Lone Wolf books could be played separately or back-to-back, as individual chapters in an epic solo campaign spanning 32 books.

Before his death Dever substantially rewrote the opening book Flight from the Dark, expanding it from 350 to 550 sections. The publishing company he founded, Holmgard Press, has now reissued the first five titles in hardcover Definitive Editions in the UK, and will be releasing paperback editions of the original gamebooks with brand new cover art — and all the original interior art by Gary Chalk — in the US on January 3.

[Click the images to spend solo time with bigger versions.] 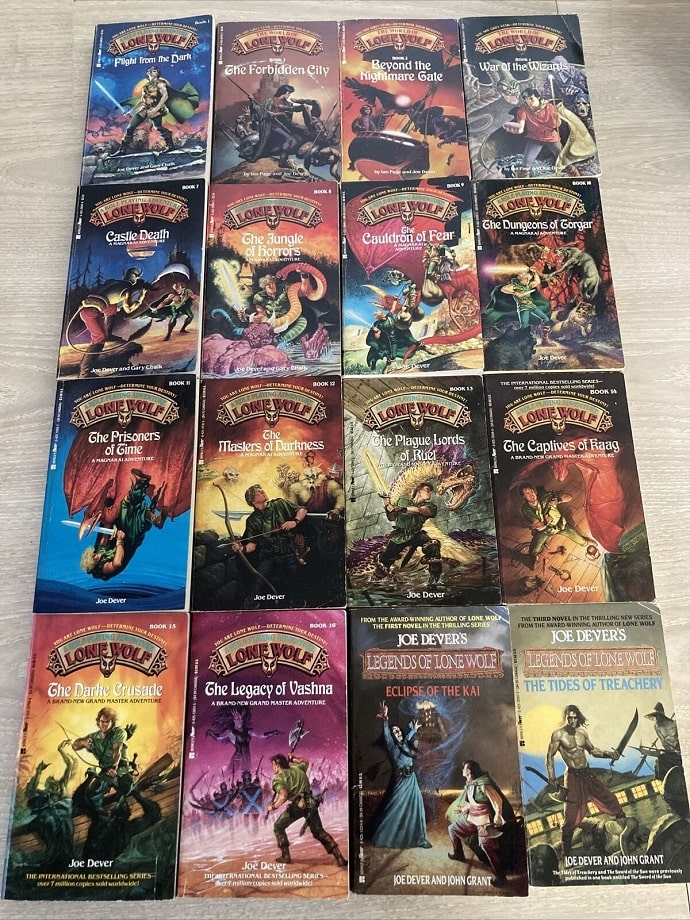 Sixteen of the original Lone Wolf paperbacks from Berkley Books

The Lone Wolf books follow the adventures of a ranger named Lone Wolf, last of a caste of warrior monks known as Kai Lords, the only survivor of a treacherous attack on the monastery of the Kai, who is tasked with taking on a perilous journey to warn the King of the gathering evil of the Darklords. Dever wrote the first 29 books; his son Ben, partnering with French author Vincent Lazzari, picked up the reins upon his father’s death.

Wikipedia has a good overview of the lengthy publishing history of the series, including this summary of the new edition:

Following Dever’s death in November 2016, his son Ben and longtime fan Vincent Lazzari were tasked to complete the series. Book 30, Dead in the Deep was published in Italian in 2018 with plans to publish it in English in 2019, along with book 23, Mydnight’s Hero. Both books were released on June 27 of that year.

In June 2021, it was announced that Holmgard Press would make a second reprint of the whole series called the Definitive Edition, leading to the publication of the last book of the series, Light of the Kai, in November 2023.

Holmgard has released five volumes in the UK in both deluxe hardcover and paperback editions; the first three paperbacks will be simultaneously published in the US on January 3.

UK reprint editions of books four and five: The Chasm of Doom and Shadow on the Sand (Holmgard Press)

The original 1984 edition of Flight from the Dark opened with Lone Wolf waking to find everyone at his monastery dead. The hardcover Definitive Edition features a re-written opening scene in which Lone Wolf joins the fight. Dever noted that, since he felt he had improved significantly as a writer over the years, it was a good opportunity to craft a better opening for the series.

In addition to a greatly expanded version of the first book, the Definitive Edition hardcovers offer a lot more to fans, including deluxe endpapers and map. The Holmgard website contains a nice summary.

In 2007, Joe Dever completely rewrote the first Lone Wolf adventure, extending the book to 550 sections, and expanding on the original with new encounters, new characters, and alternative action — for example, you can now participate in the defense of the Kai Monastery. For fans of the gamebook, it provides a deeper and richer route back to Magnamund.

To celebrate the launch of the Definitive Editions, Holmgard Press has rebalanced and edited this extended manuscript and commissioned forty brand-new full-page illustrations from NERDGORE to accompany it.

Read all the details here. 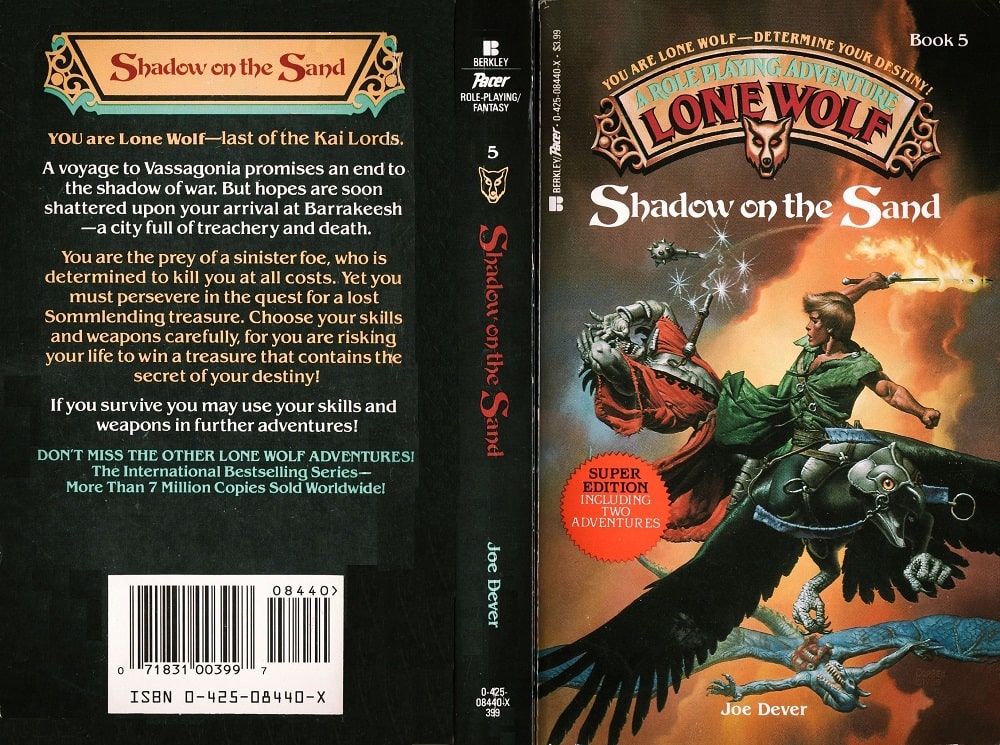 First US printing of Shadow on the Sand (Berkley Books, 1985). Cover by Richard Corben

There’s no details on when the Definitive Edition hardcovers will be published in the US. For now, the original edition reprints of the first three books are what we have to look forward to.

What’s special about the new paperbacks?

YOU are the sole survivor of a devastating attack on the monastery of the Kai, who for thousands of years have protected the realm of Sommerlund from destruction at the hands of the Darklords. In FLIGHT FROM THE DARK you must set off on a perilous journey to warn the King of the gathering evil. The servants of darkness hunt you across every turn of the page. Choose your skills and your weapons carefully – your choice may be the difference between life and death in the most fantastic and terrifying journey of your life.

FLIGHT FROM THE DARK is the first book in the LONE WOLF series – a unique interactive fantasy series. Each episode can be played separately or combined to create a continuous role-playing epic.

The DEFINITIVE EDITION series from Holmgard Press is the first time Joe Dever’s epic 32-book saga has ever been produced in a single consistent format.

Nearly 40 years after they first appeared the original Lone Wolf paperback are highly collectible — meaning expensive, especially for the later volumes, which had a smaller print run — and it will be delightful to have inexpensive modern editions readily available.

The map of the Lastlands by Francesco Mattioli, included in the Definitive Edition

No news yet on whether there will be digital editions of any of these classic books.

Keep your eye on the Lone Wolf website here for up-to-date details.

I hope to see more news on US editions of additional volumes in the series, including the hardcover Definitive Editions. For now, I’m delighted to see the re-release of the first three in handsome and inexpensive editions.

The Lone Wolf series is one of the enduring classics of the solo gamebook genre, and it’s well worth checking out.

See all our coverage of the best new Solitaire Fantasy Games here.

I need these! Just ordered Ian Livingstone’s Shadow of The Giants (new 40th Anniversary Fighting Fantasy…this one has a tie’in to Firetop Mountain).

I forgot all about Shadow of The Giants. Pretty sure I saw it advertised this summer, as the newest Fighting Fantasy gamebook (#71 in the series!) But I haven’t seen it for sale in the US yet…. did you order it from the UK? 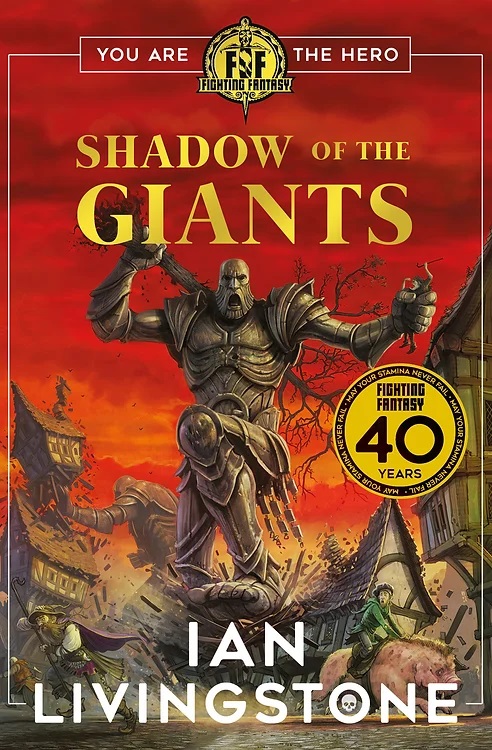 Had trouble finding a place to order frim US, then found bookdepository.com had it. Trying them for the first time.

The hardbacks look awesome. I wonder if the Ian Page series – Greystar the Wizard – will be included.