I spent a lot of hours last year chasing down, reading, and writing about some very fine anthologies produced by the triumvirate of Isaac Asimov, Martin H. Greenberg, and Charles G. Waugh. Their output in the decade before Asimov’s death in 1992 was frankly amazing: some 70 anthologies, including nearly a dozen each in Isaac Asimov’s Wonderful Worlds of Science Fiction and Isaac Asimov’s Magical Worlds of Fantasy; a decade-by-decade survey of 20th Century SF, The Mammoth Book of Classic Science Fiction; and dozens of others. These were highly readable books assembled with a deep love and knowledge of the genre.

Asimov, Greenberg and Waugh were playful in the themes they chose, and they had a mathematician’s love of lists, in books like The Seven Deadly Sins of Science Fiction and The Seven Cardinal Virtues of Science Fiction, and especially the trio 13 Short Fantasy Novels, 13 Short Science Fiction Novels, and 13 Short Horror Novels — the latter assembled without input from Asimov. The 13 Short Novels trilogy, which collects 39 terrific novellas in three volumes, is long out of print and forgotten today, which is a shame. These are exceptional books, and one is absolutely fabulous.

Back covers for 13 Short Fantasy Novels and 13 Short Science Fiction Novels.
13 Short Horror Novels in still in the mail, but I’ll scan it when it arrives, I promise.

The first volume, 13 Short Fantasy Novels, was published by Crown Books under its Greenwich House imprint; for the later volumes Crown’s Bonanza Books imprint did the honors. All three are sizeable hardcovers (680-760 pages), and were never reprinted in paperback. Or in digital formats, for that matter. But they’re not hard to track down (or expensive).

All three anthologies are packed with great reading, but the first, 13 Short Fantasy Novels, is absolutely spectacular, especially as an introduction to classic fantasy series.

It contains Thomas Burnett Swann’s Hugo Award nominee “Where Is the Bird of Fire?”, Suzy McKee Charnas’s Nebula award-winning “Unicorn Tapestry,” and Fritz Leiber’s timeless Fafhrd and the Gray Mouser novella “Ill Met in Lankhmar,” a Hugo and Nebula winner, plus a Thieves’ World tale from Poul Anderson, a Jack Limekiller adventure by Avram Davidson, a Conan classic by Robert E. Howard, an Elric novella by Michael Moorcock, a Witch World story by Andre Norton, a Dying Earth tale by Jack Vance, a Dilvish adventure by Roger Zelazny, a Brak the Barbarian novella by John Jakes, and more.

13 Short Fantasy Novels draws from some of the most popular fantasy sources of the era, including two Thieves’ World stories (by Anderson and Janet Morris), and no less than four stories from Lin Carter’s acclaimed Flashing Swords! anthology series (the John Jakes, Michael Moorcock, Andre Norton, and Roger Zelazny). The editors reach all the way back to the 19th Century (with H. Rider Haggard’s “Black Heart and White Heart,” taken from the January 1896 issue of African Review), and from sources published just three years prior (Zelazny’s “Tower of Ice,” published in Flashing Swords! #5: Demons and Daggers, in 1981).

Some of the sources for 13 Short Fantasy Novels: Thieves World, The Magazine of Fantasy &
Science Fiction, August 1878, and Flashing Swords! 4. Covers by Walter Velez, Alex Schomburg, and Don Maitz

Here’s the complete table of contents for 13 Short Fantasy Novels.

13 Short Science Fiction Novels was published in 1985, one year after 13 Short Fantasy Novels. It didn’t tap nearly as many well-known series to fill pages, but it had no shortage of acclaimed fiction.

13 Short Science Fiction Novels contained John W. Campbell’s Retro Hugo Award winner “Who Goes There” (inspiration for John Carpenter’s classic The Thing), Donald Kingsbury’s Hugo nominee “The Moon Goddess and the Son,” Philip José Farmer’s Hugo nominee “The Alley Man” (which lost out to Daniel Keyes’ “Flowers for Algernon” — no shame in that!) Phyllis Eisenstein’s Hugo, Nebula, and Locus nominee “In the Western Tradition,” and Barry B. Longyear’s famous “Enemy Mine,” which swept the Hugo, Nebula, Locus and awards (and was adapted into a film staring Dennis Quaid).

It also contains a Time Safari novella by David Drake, a story in Robert Silverberg’s much-loved Majipoor sequence, and much more.

The last volume, 13 Short Horror Novels, was put together solo by Greenberg and Waugh.

It also contains the complete text of Frank Belknap Long’s short Cthulhu Mythos novel The Horror from the Hills, originally serialized in Weird Tales in January – March, 1931, and reprinted in hardcover by Arkham House in 1963. 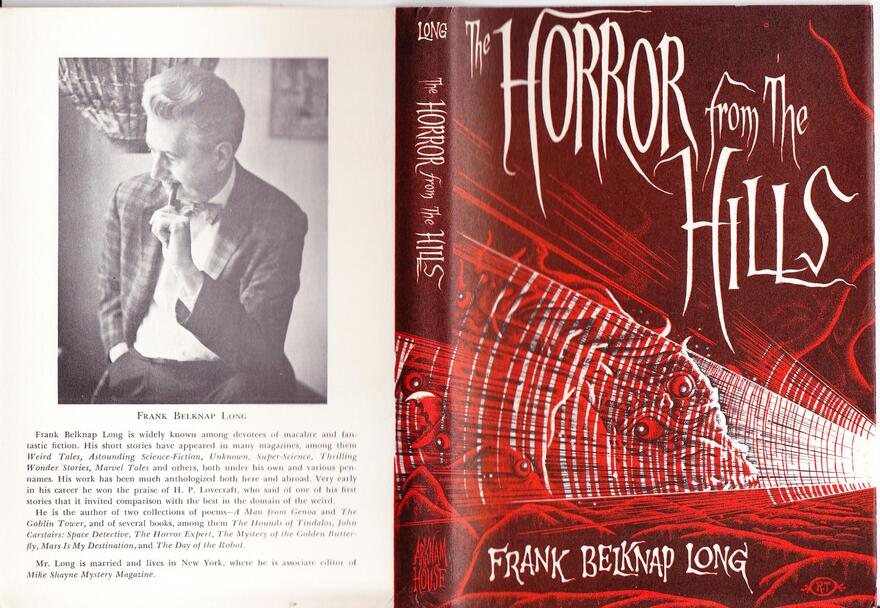 The Horror from the Hills (Arkham House, 1963). Cover by Richard Taylor

Here’s the complete details on all three volumes.

13 Short Fantasy Novels and 13 Short Science Fiction Novels both had covers designed by Morris Taub, and if I had to guess, I’d say the cover to 13 Short Horror Novels was too.

All three books have been out of print for over 30 years, but are widely available at eBay and other other sources at very reasonable prices (I bought copies of all three for under 10 bucks). Believe it or not, Amazon still has copies of 13 Short Science Fiction Novels in stock.

We’ve also discussed a few highly enjoyable volumes from Waugh, Greenberg, and others.

Thanks for the heads up! Good to know e-bay can provide this rare material.

I just bought 13 SHORT HORROR NOVELS for $6.54, including shipping. That’s less than a new paperback.

There are currently nine copies of 13 SHORT FANTASY NOVELS available today; average price is $5-8 (including shipping to the US):

There are about half a dozen copies of 13 SHORT SCIENCE FICTION NOVELS, with prices starting at $5.58 (including shipping):

I need to check which ones of these I have and then start ordering any I’m missing.