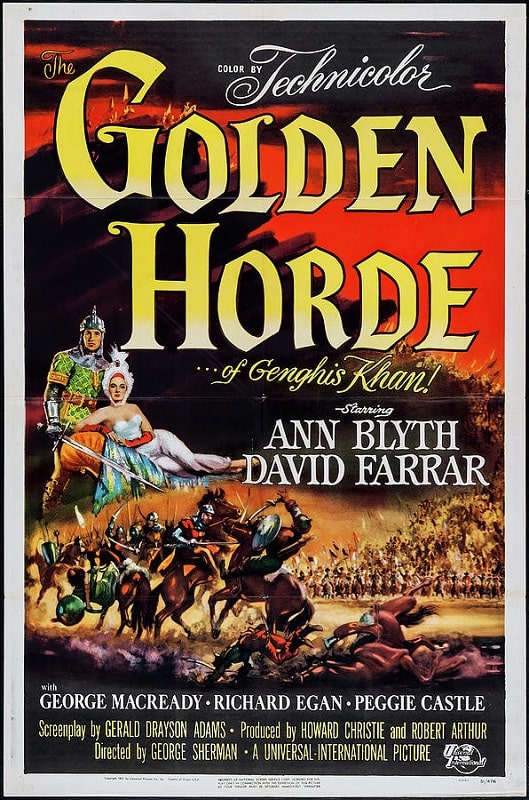 Huns and Mongols, the mounted hordes who swept out of Central Asia into eastern and central Europe in the Middle Ages, made a lasting impact on the psyche of the folk of the lands they invaded, all the way down the 20th century—as shown by the fact that Allied propaganda during World War I successfully branded their German opponents as “the Huns.” Invoking the Mongol Horde was a reliable source of terror in mid-century movies from Russia to Italy to Hollywood, as we see in the films covered in this week’s article. All three suffer from the casual racism of the time in which they were made, but it’s better to see that and note it than to pretend it never happened or doesn’t matter. History is always seen through the lens of the time it’s viewed from, and we learn interesting lessons from its distortions. 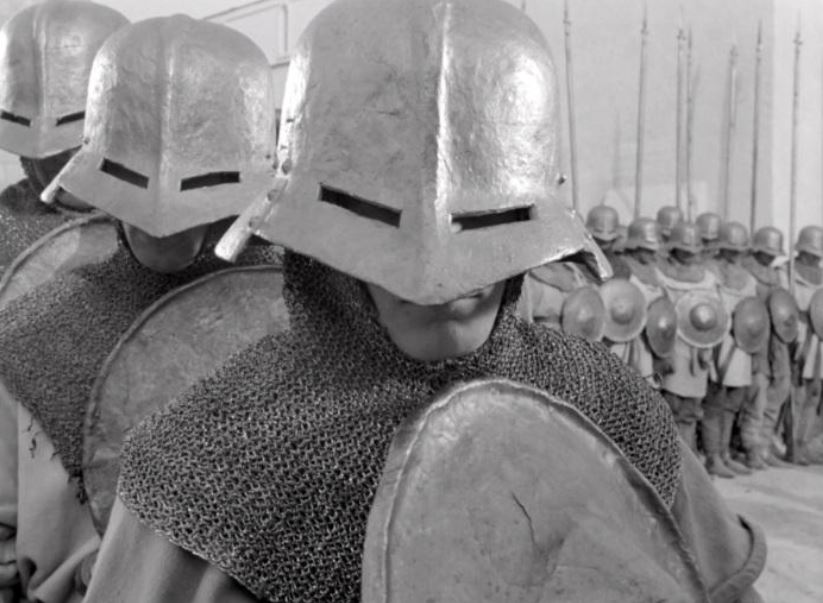 Alexander Nevsky is a towering achievement, an enduring classic of world cinema, except for the parts where it’s goofy and awful. Director Sergei Eisenstein, who’d made his name in the silent era with Battleship Potemkin (1925), had been trying ever since the advent of sound in film to get another movie made, but under the strictures of Stalin’s Russia it was nigh impossible. Finally, by selecting as subject a historical tale of Russian resistance to German aggression (Hitler was then saber-rattling at Stalin), and by collaborating on the script with a Communist Party bigwig, Eisenstein was able to bring Nevsky to the screen.

It’s set in the 13th century, when the lands of the Kievan Rus, already plundered by the Mongols from the east, are beset by a new threat from the Teutonic Knights to the west. To counter the German assault, the boyars of Novgorod turn to the war hero who’d also staved off the Swedes from the north, Prince Alexander Nevsky (Nikolai Cherkasov). From a story standpoint, this isn’t a complicated film: there’s the main, heroic plot, in which Alexander rallies the Russians to resist the heinous Germans, plus a goofy romantic subplot in which two cartoonish would-be heroes vie for the affections of a glorious Russian war maiden. But ignore all that and just look at this movie, because the matchless visuals are what we’re here for.

After a run-in with some Mongols from the Golden Horde — who look perfect — Alexander is off to Novgorod to start building a coalition to fight the Germans. The reconstruction of medieval Novgorod is painstaking and beautiful: this is Old Russia, built of wood and earth and complete in every lovely detail. And the Germans are coming to destroy it.

Cut to the city of Pskov, newly conquered, and the Teutonic Knights, its conquerors. Here history has been augmented by art to depict a truly evil enemy. The knights are armored automatons, faceless and inhuman in their full helms, dealing death with cold, fanatical zeal. Even their foot soldiers’ heads are enveloped in coal-scuttle helms that deliberately evoke the helmets of the German Wehrmacht. Imperial Stormtroopers? Here’s where they come from, Star Wars fans. Only the knights’ robed and hooded priests have faces — but their visages are the cadaverous faces of vultures, Emperor Palpatine in the medieval flesh.

These Germans are bad. How bad are these Germans? They burn babies and throw live children right into bonfires. That’s how bad.

On to the arousing-the-Russian-people-to-fight montage, and high time to mention the stirring orchestral and choral soundtrack by Sergei Prokofiev. Eisenstein worked closely with Prokofiev to fully integrate the music with the moving images. The director had distinct ideas about how to do this, because he’d been studying the recent revolution of the synchronization of music and film by its undisputed master: Walt Disney.

The last half of the movie is pretty much all medieval war and its aftermath, as Alexander maneuvers the Teutonic Knights into a final confrontation on the ice of frozen Lake Chudskoye. The climactic battle is justly famous for its setup and onset. The advance and charge of the Teutonic Knights established the look and feel for medieval warfare on film for everything to follow, from Laurence Olivier’s Henry V all the way to Peter Jackson’s Lord of the Rings.

It must be said, this is one long-ass battle, but it’s organized into several clear and distinct phases, so the viewer never loses track of what’s going on. The goofy romantic rivals get too much screen time, and Prokofiev’s pursuit theme is shrill, frenetic, and overwrought, but the climax on the icy lake, as the surface cracks and disintegrates under the heavily armored Germans, pays for all.

Victory, however, leads to deep melancholy and extended brooding over the carnage, because Russians. “I kiss your sightless eyes and caress your cold forehead,” the chorus sings. But at least the romantic subplot ends happily, and there’s even a parade! Hats are waved, babies are kissed, and all is well again in Mother Russia. 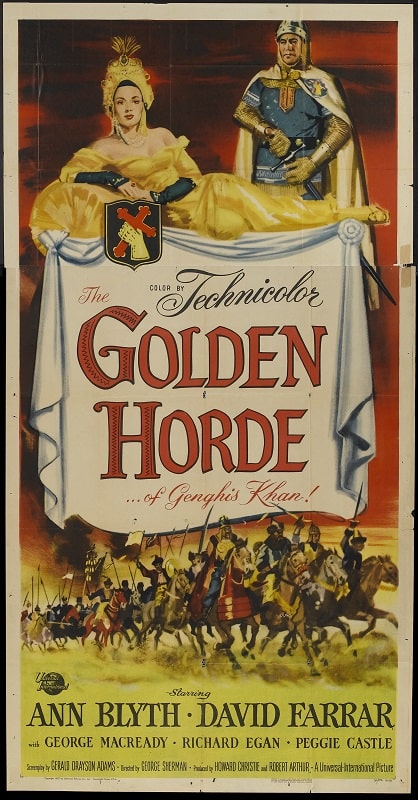 The plot of this tale of English knights versus Mongols on the Silk Road comes from a story treatment by Harold Lamb, the adventure fiction expert on Central Asia, so it has good bones, but we have to blame George Drayson Adams for the appalling script. Lamb is known for his even-handed treatment of Asians and Europeans, but that got lost somewhere along the way: the Asians here are all caricatures of one flavor or another, while the English are noble, forthright, and convinced that their innate superiority entitles them to be condescending and rude to all the Persians and Mongols. It doesn’t help that there are zero Asians in the cast except for one (1) “exotic” dancer.

Anyway. It’s the year 1220, and the Mongols and their allies the Kalmuks, “a tidal wave of death and destruction,” are threatening the city of Samarkand. Queen Shalimar (Ann Blyth) has a scheme to pit the Mongol and Kalmuk leaders against each other for the right to marry her, but everyone’s plans are upset by the arrival of a dozen English ex-Crusaders led by Sir Guy of Devon (David Farrar), who also takes a shine to Shalimar and decides on the spot that to keep the queen from giving herself away, Samarkand will fight to the death under his command. When Shalimar objects that she’s got everything under control, Sir Guy calls her a “pigeon-brained halfwit” — twice!
Adventures ensue, half in a Samarkand palace set that’s honeycombed with secret passages, and half out in California’s Death Valley standing in for the high steppes.

The director, George Sherman, had helmed nearly fifty Westerns before making this film, so you can bet there’s plenty of galloping. Much is made of the superiority of European heavy armor and the English longbow over the gear of the lightly armed horse warriors, but when they do come to grips the fights are just weak stage combat. The plot might be more complicated than it needs to be, but at least that keeps the interest level up. You can choose to be upset because Farrar’s Sir Guy is an arrogant and bossy mansplainer, or you can prefer to admire Blyth’s Shalimar, who plays all sides against the middle without once simpering or acting helpless, though the story does require her to fall in love with Sir Guy, despite (or because) of the fact that he refers to her as “that wench.”

As the only other character with any brains in their head, you also have to admire the ever-treacherous George Macready as Mongol agent Raven the Shaman, a fine villain. When his boss Genghis Khan (Marvin Miller), looking more like a Neanderthal than a Mongol, finally shows up at the gates of Samarkand with his horde behind him, he finds that his son is dead, his advance troops have been slaughtered, and his alliance with the Kalmuks is in tatters — most of that the handiwork of Queen Shalimar, though Sir Guy takes the credit, of course. Faced with such unexpected resistance, how does the mighty khan respond? Watch it and see. 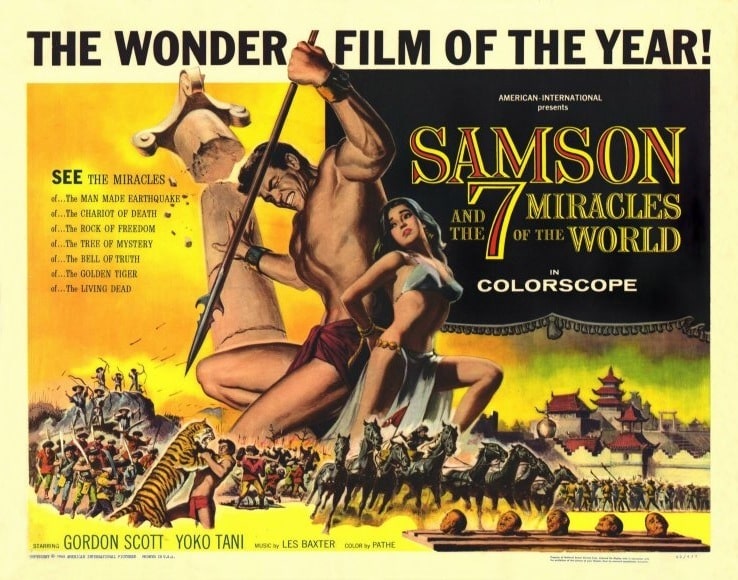 Samson and the 7 Miracles of the World

Despite its American title, this isn’t a biblical epic but rather a peplum flex-fest retitled from Maciste at the Court of the Great Khan. It’s what in Italian cinema was called a “recovery” film, a low-budget quickie made with the assets from an expensive epic to recoup part of the cost of the big-budget film, in this case 1962’s Marco Polo. Thus, its costumes and sets are first-rate, but nothing else about this production lives up to that standard.

Though it’s set in China in the 13th century, almost every actor with a speaking part is a European or American in awkward makeup, and the Orientalism is in fifth gear. Moreover, Samson/Maciste (Gordon Scott) looks exactly like Tarzan, which isn’t surprising as Scott spent the latter half of the Fifties playing that role in movies and TV. To avoid being typecast as a jungle lord Scott moved to Italy to make sword-and-sandal adventures, but they still made him wrestle a tiger in this one.

The plot is the familiar rescue-the-imperial-heirs-from-the-invaders thing, with plenty of abductions, escapes, and pursuits punctuated by fights with the Mongol invaders. The action is all pretty perfunctory and none of the performances really stand out, especially that of leading man Scott, who’s particularly bland. Scott’s Samson is modest and agreeable but not very engaged except when performing a Mighty Feat of Strength, and then he sweats a bit. In the last half hour, the film gives up its pretensions to historicity and goes full-on fantasy, and that almost saves it before it’s sunk by a weak and abrupt ending. Nice sets, though.

Another Ellsworth’s Cinema of Swords? Eureka!

I have watched Alexander Nevsky a number of times and it never gets boring, that score by Prokofiev is magnificent! I have yet to see either of the other films; I might have to take a look at the Golden Horde, it sounds like the gorgeous Ann Blyth was at the top of her game.

Thanks again for finding films that I’ve never even heard of and even more for watching the bad ones so I don’t have to!