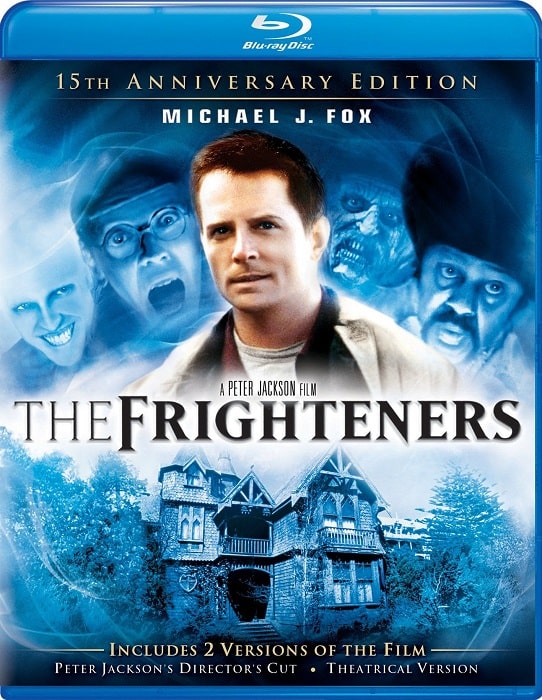 Read Part I: The Real-Life Inspiration, and Part 2: Humor & Horror Examples + A Recap.

When I sat down to write about The Frighteners, I found myself writing around the “problem/s” with the movie. At first I thought it didn’t have enough plot, but it has plot points galore, and while every character seemed to be a trope or stereo-type, there were lots of hints about the depths of these characters and their relationships. I deleted a fair bit of what I wrote, after I realized that I wasn’t finding the problem. So I watched it a third time. It was like scales fell from my eyes. I think I understand Peter Jackson’s formula for the film, and having clued into that, I liked it ever so much more.

The Frighteners is two films sharing the same celluloid, but paying little or no attention to the other. The scary ghost story is unaware of the broad comedy, and vice versa.

In this world, average humans and average ghosts share the same locations and space, but are generally unaware of each other. The living are busy with their stuff, and the ghosts are tightly focused on their own problems (like avoiding bully ghosts). There are a scarce few ghosts, and even fewer humans, who are aware or care about what’s going on with the denizens on the other side of the veil, even if they’re standing physical elbow to ghostly jowl on the street corner waiting for the light to change. 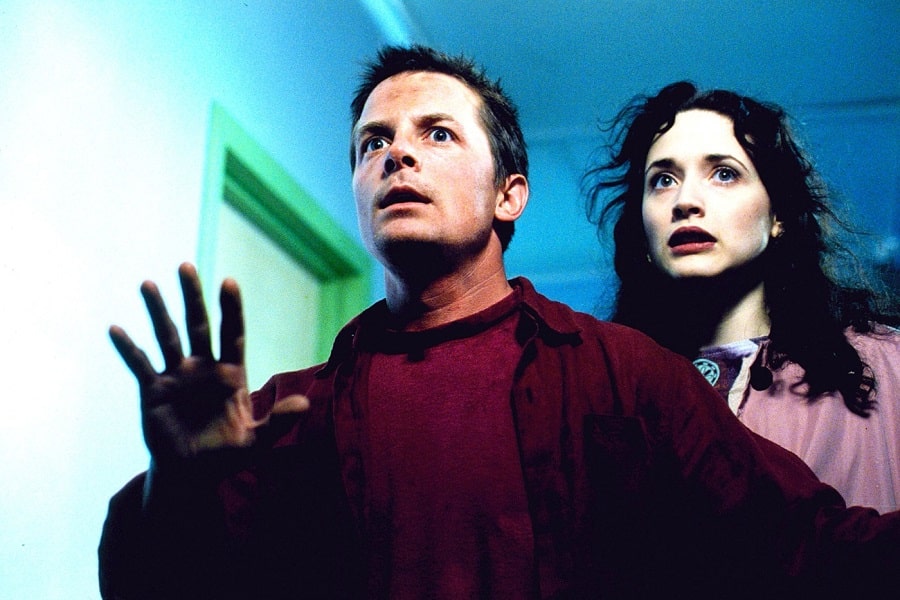 Michael J. Fox and Trini Alvarado in The Frighteners

Every scene seems to feature one of several characters who are big, broad, loud, and eccentric as can be. They’re nearly all bullies of one sort or another. The other characters don’t realize the bullies are the comedic element of the scene. They’re trying to get on with the drama and plot. Even in the rare moments when one character does notice the outre behavior, it gets a little frown followed by a “Now, where were we?” kind of response.

Scenes alternate who is the bully and who is the hero, but within the scene they stay in their lane, either doing their broad comedy or moving the plot forward.

Troy Evans as Sheriff Walt Perry in The Frighteners

Paying attention to the sheriff is what really led me to understanding the duality structure. Sheriff Walt Perry is played by Troy Evans, who worked with Michael J. Fox in 1985 on Teen Wolf. As sheriff, he holds the town (and possibly the film) together, dealing gently with a host of touchy weirdos who all seem like they could blow a fuse at any moment. He doesn’t walk on egg-shells, he’s not dim-witted, and he’s not a cream puff. He’s gently avuncular.

He doesn’t necessarily believe in ghosts, however when he sees Bannister talking to what appears to be thin air, he’s compassionate. He doesn’t buy into the easy assumption that Bannister has been killing people, despite being found with the bodies (or was last to see alive) numerous murder victims. 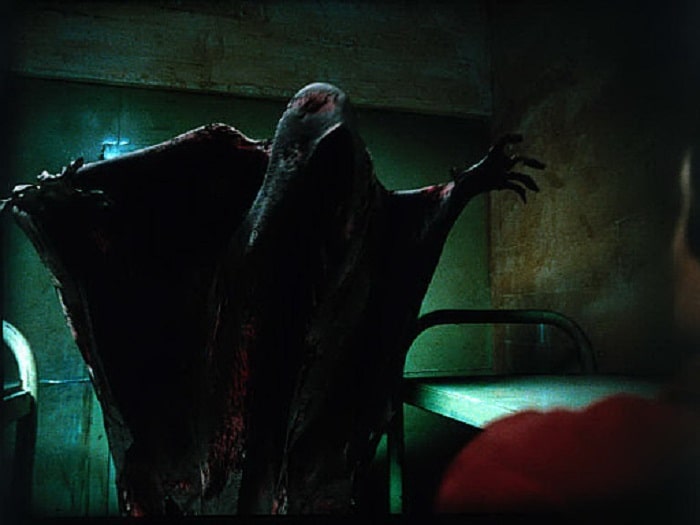 This is a small town. The sheriff knows the back-stories of his townspeople. You can tell he chalks Bannister’s odd behaviors down to grief about his wife’s death, rather than buying into the newspaper’s claim that Bannister’s a conman, or the FBI agent’s insistence that Bannister is the serial killer.

He witnesses everyone in town at their worst, and gently ambles through his job holding his counsel and giving everyone the space they need to indulge their wacky selves, without ever passing judgment. Think Andy Griffith’s portrayal as sheriff of Mayberry, if Andy didn’t realize he was in a sitcom. Sheriff Walt is the perfect straight man for the film. 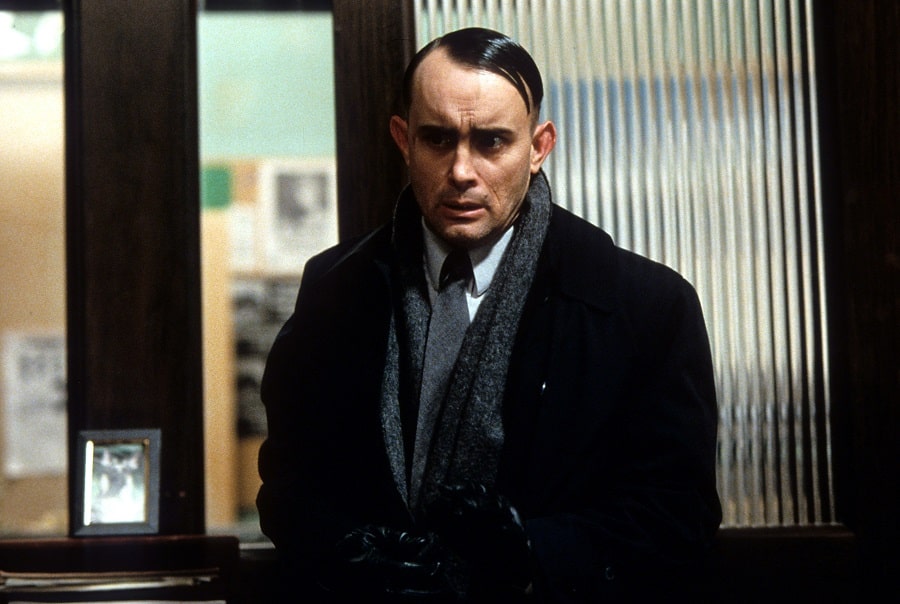 Jeffrey Combs in The Frighteners

As his polar opposite, there’s FBI agent Milton Dammers, played by Jeffrey Combs, best known for his work in Re-Animator — the role that got him cast in this movie. Dammers sports an Adolph Hitler haircut. For his looks and his eccentric acting, picture the love child of Jim Carrey and Hitler. He is both a semi-hero and villain.

He brandishes a hemorrhoids pillow one moment and an Uzi the next. He exhibits many behaviors of a neuro-diverse person, and at times, you suspect he’s had a psychotic break. In no moment more so than when he bares his chest to Lucy, declaring, “My body is a roadmap of pain!” in a Bela Lugosi voice. It’s covered with tattoos and scarification that is a mix of swastikas, Voodoo sigils, and occult symbols. He claims all the marks were from when he infiltrated various cults, including the Manson Family and The Cult of Dead, in which he participated in ritualistic cannibalism. 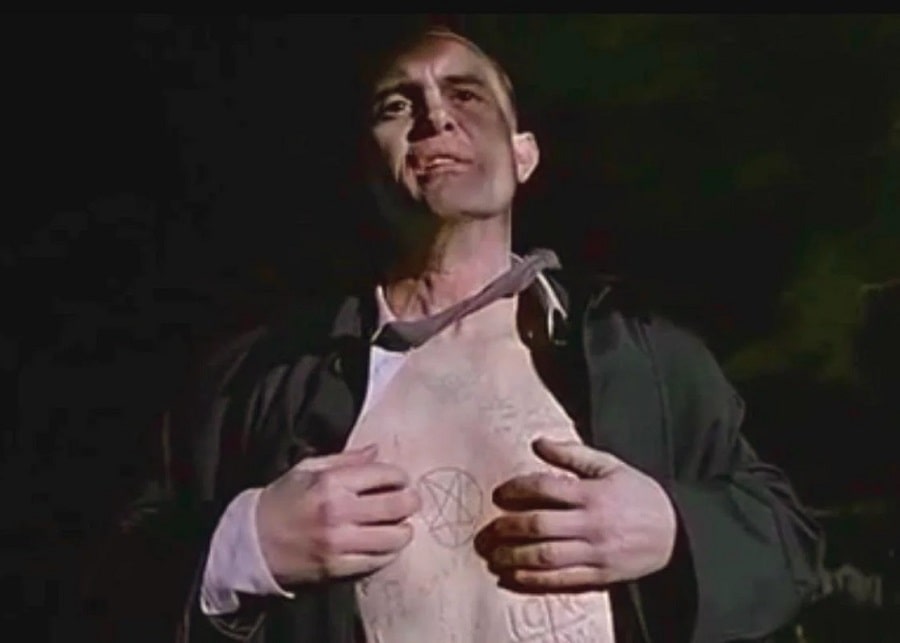 “My body is a roadmap of pain!”

Dammers’ haircut and scars aren’t the only time Jackson makes fun of Nazis.

Not all of the jokes get assigned to a character, sometimes it’s also the setting. The restaurant where Bannister translates for Lucy and ghostly Ray is a swanky, fine-dining variation of a Medieval Times restaurant and is named Excalibur (though you’ll need to stop the film and zoom in on the brief shot of the exterior to see it). The waiters are all dressed as knights and there’s even a juggling harlequin jester. The logo of the restaurant looks like a Nazi war eagle, but a closer view reveals it to be a duck.

As is true throughout the movie, none of the characters pay any notice or comment on the over-the-top actions or weirdness of setting. The diners at Excalibur are dressed up, but not in costumes. Suits, ties, and cocktail dresses adorn the patrons.

John Astin and Michael J. Fox in The Frighteners

Once you start noticing the parodies and pastiches, it’s hard to stop. As mentioned above, Dee Wallace Stone (of E.T. fame) portrays Patricia Bradley and Julianna McCarthy, who portrays “Old Lady Bradley,” Patricia’s mother, (who went on to appear in Starship Troopers the following year) have a whole “Puritanical mother domineers naïve daughter” Carrie-kind of vibe throughout the film. It all comes to a head beautifully toward the end, in an over-the-top sequence that puts Sissy Spacek and Piper Laurie of Carrie to shame.

You can also look for hat tips to Star Trek II: The Wrath of Khan and Heaven Can Wait. The cryo-lab, used to freeze Bannister so he can fight Bartlett, is straight out of any Frankenstein movie. The creature that delivers the coup de gras is a tribute to the baby monster in Alien crossed with the sandworms of Dune and Beetlejuice.

I can’t wait to watch this love letter to horror films again next year, and see what else I spot.

Jeffrey Combs is of course also the ultra-wunderkind actor who portrayed the Vorta Weyoun and the Ferengi Liquidator Brunt on Star Trek: Deep Space 9, disappearing into his characters and makeup and costumes so completely that he once managed to portray both characters in the same episode with presumably a large segment of viewers (or most of them?) completely unaware that he was up there twice (I certainly had no clue when I first saw the episode).

I had no idea he appeared in DS9 — let alone had multiple roles!