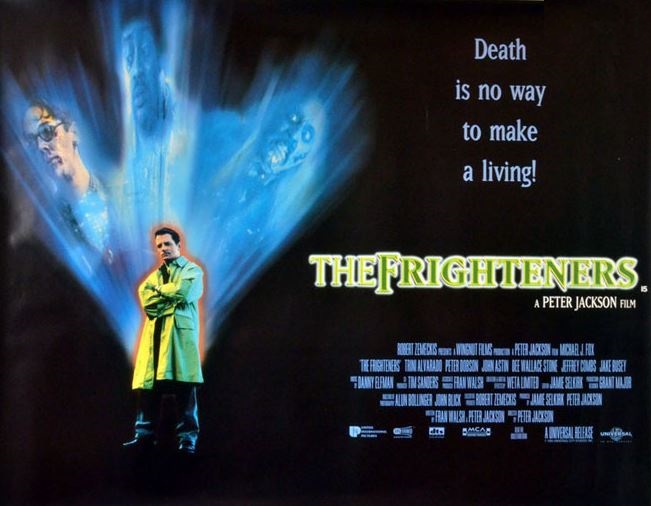 I hadn’t seen The Frighteners since it was in the theaters in 1996, until I watched it again last week. Twice. I had drastically different reactions between the second and third viewings.

After my first 2022 re-view, I came away thinking the movie was mainly just paying homage through pastiche to a lot of things. While it had interesting vignettes with diverse tones and styles, it never fully gelled into its own thing. It’s as if it went to a Halloween costume shop, tried on and modeled a dozen different outfits, then later said, “What did you think of my costume?” It was more a fashion show than a full narrative arc.

It was equal parts horror and humor. Often, an equal ratio doesn’t work well. It comes off as a split personality, or two different films sharing a movie reel. This is especially true when the humor isn’t a coping mechanism for the protagonist or an emotional vent for the audience. The humor was there, but it never really served a purpose in the way humor normally does when mixed with horror. The two parts seemed at odds. 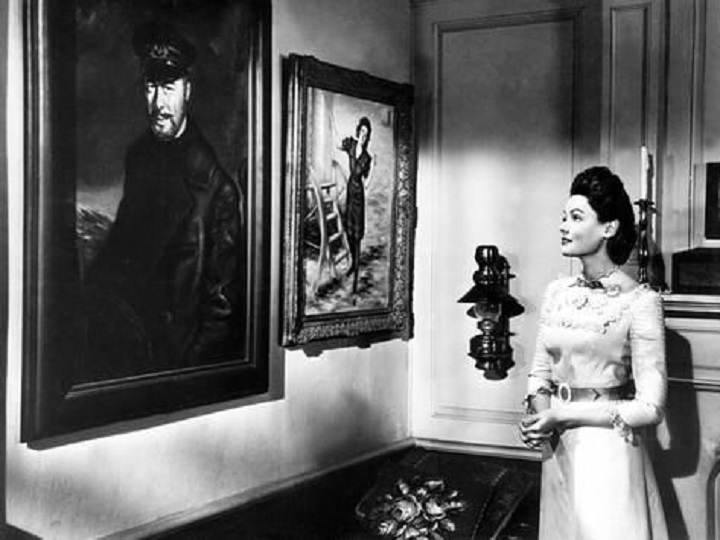 There are lots of paths a movie with ghosts and humor can take. Here are some good examples, fully realizing there are many more that could be added to this list, and humor is particularly subjective, so your mileage may vary. (For me, it’s a great list of Halloween season viewing.) 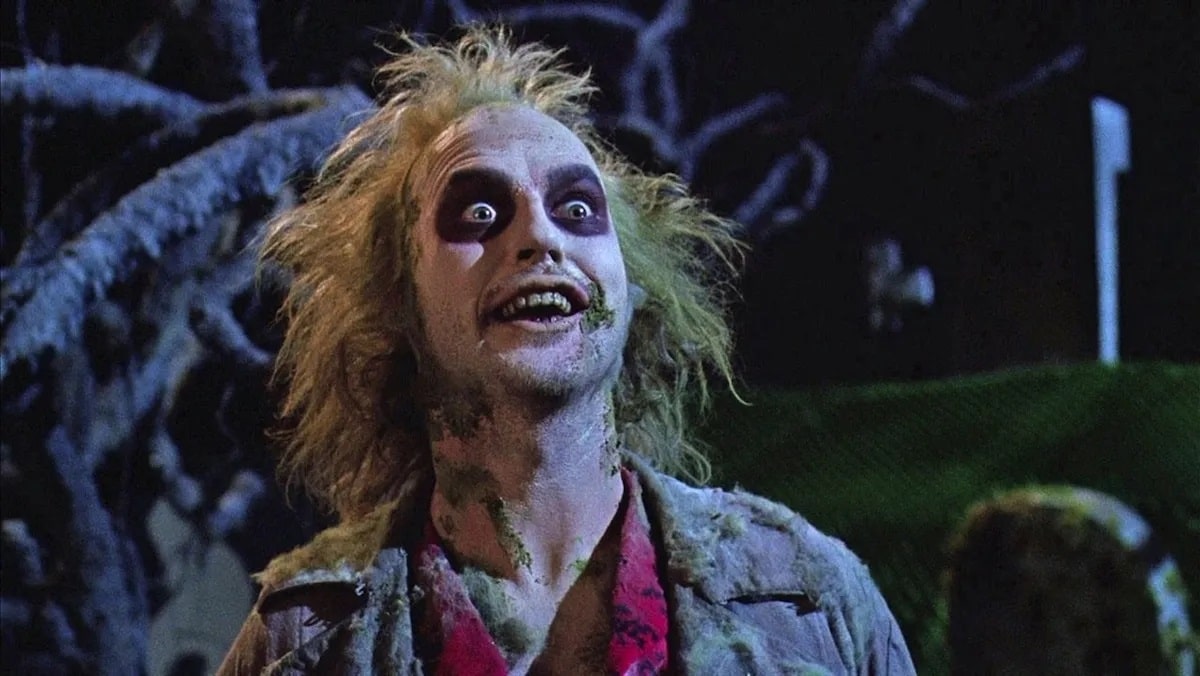 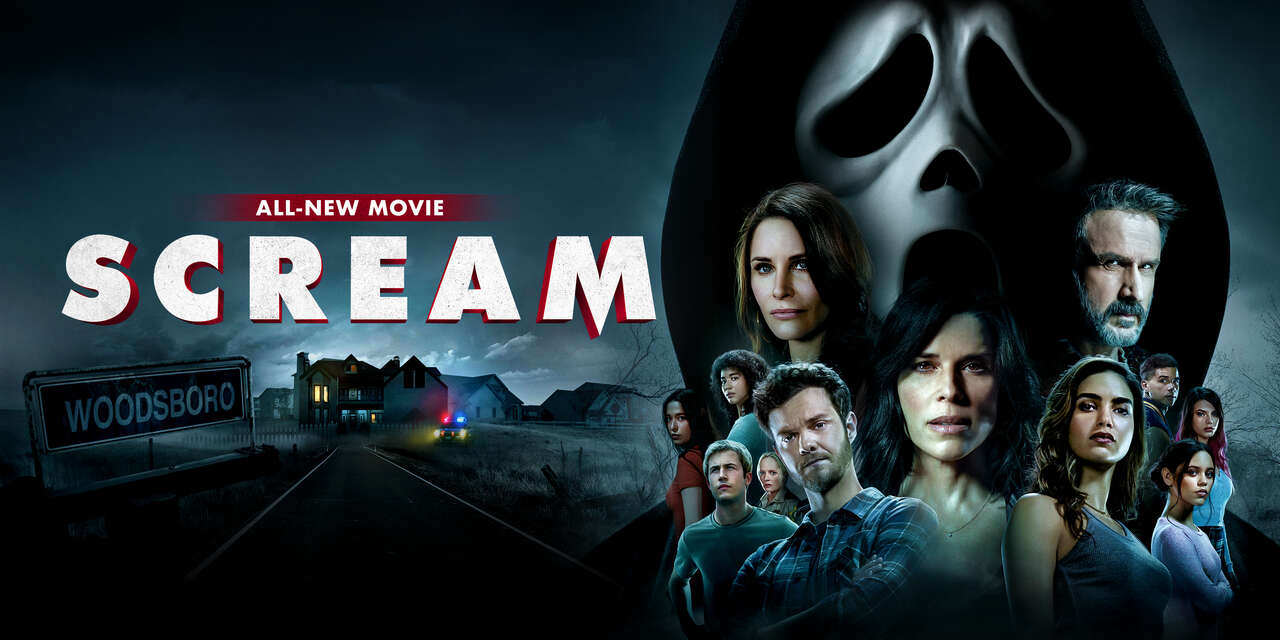 The Scream franchise — these are about the only slasher, dead-teenager horror flicks I enjoy. The first four revolved around a core cast of Neve Campbell, Courtney Cox, David Arquette, and Jamie Kennedy.

The amount of humor versus horror is in different ratios for each of these, but they all do a reasonably good job (or better) at blending the laughs and screams.

The Frighteners was written by Fran Walsh and Peter Jackson and directed by Jackson. The plot was first conceived as the two were working on Heavenly Creatures. 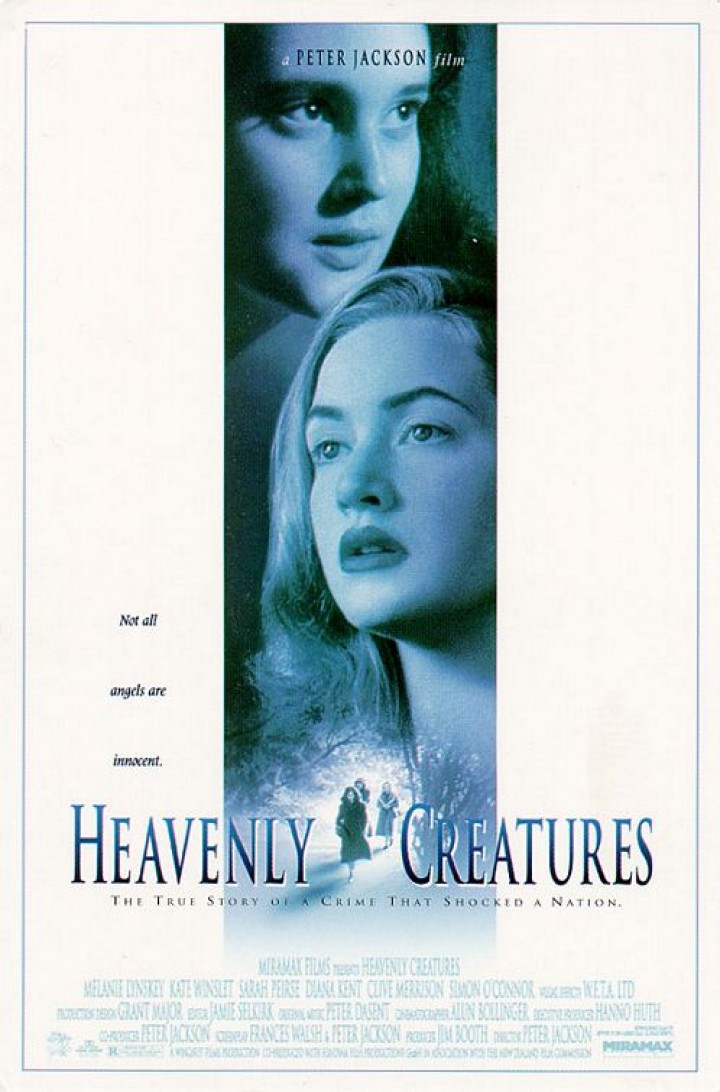 The script was originally written as a Tales from the Crypt feature film. It sometimes feels like a Disney theme-park ride. Perhaps that’s to be expected, as it originated as a ride. Other film properties that started out like that, most notably the Pirates of the Caribbean franchise, manage to disguise those antecedents better. In The Frighteners there are lots of interesting bits that pop up, then fade away, unremarked upon, never to return. There are too many quirky but unexplored character subplots. It doesn’t do a deep dive into them, to make this film its own. If you were to take all the pastiches out, there’s just no there, there.

For those who haven’t seen it or may not remember the basic details of the plot, Frank Bannister, our not-so-heroic protagonist, is played by Michael J. Fox in what would be his final leading man, feature film performance, due to the challenges of his Parkinson’s disease.

In the film, Bannister survived a tragic car accident which left his wife dead and gave him the ability to see ghosts. Grief has caused him to give up on being a successful architect. He now lives in his unfinished dream house. Only the wooden bones of the house were completed, and it serves as a would-be mausoleum ossifying his memories of his dead wife. Flashbacks show us he was a rich, successful jerk. As the movie opens, he may be doing penance for that final fight with his wife, but he hasn’t become a better human. 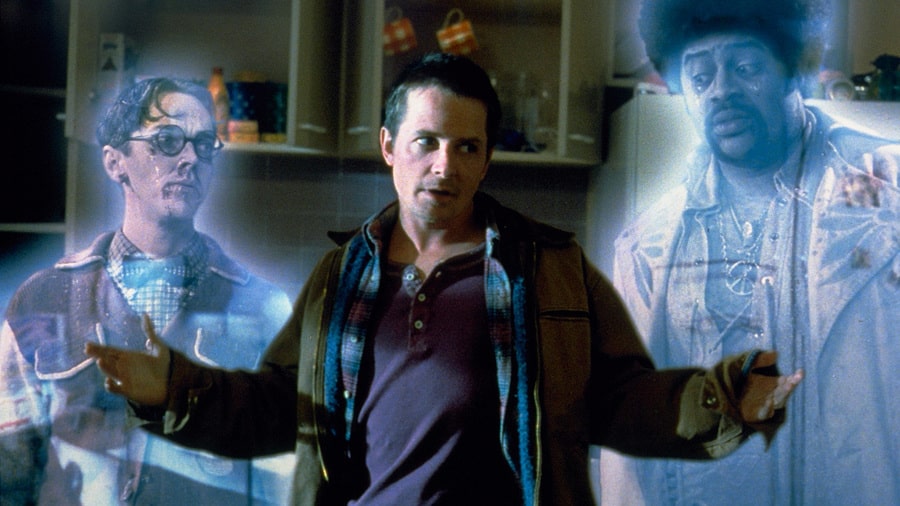 Michael J. Fox in The Frighteners

Still, he’s managed to befriend three ghosts — Cyrus, a 1970s black “street gangster” — he’s a cross between a Blaxploitation hero and a disco-dancing stud (he’s also the only notable person of color in the film); Stuart, a 1950s “nerd” shown to be a nerd by the fact that he wears glasses, is of slight build and speaks softly; and The Judge, a Wild West gunslinger who’s getting too old for this shit, played brilliantly by an aging John Aston (Gomez in the Addam’s Family TV show). He was perhaps the wisest character, though he’s also the character who has one of the crasser jokes in the film, about his ghost raping a mummified Egyptian woman’s body, back in the days when that sort of thing could pass for humor.

Frank has recruited these three to haunt chosen targets’ houses, so Frank can do a snake-oil salesman’s job of purging the ghosts.

The first time we see him in “professional” mode, the scene is inspired by Bill Murray’s first trip to Sigourney Weaver’s apartment in Ghostbusters to check out the claim of a monster in her refrigerator. While Dr. Venkman was trolling for a date in Ghostbusters, Bannister is looking to make some bucks, namely, $450.

The amount is a stark contrast to the high salary he demanded pre-accident. If I was hiring a ghost wrangler, I’d expect to pay in the thousands. But, Ray Linskey, played by Peter Dobson, seems to think a few hundred is highway robbery. Given that Bannister pulls out an ancient radio (or maybe it was once a space heater, it’s hard to say), jury-rigged into something that’s looks like a prop from a black-and-white, B-movie, mad scientist’s laboratory. He flips the switch on, the machine makes some noise, and then he supposedly banishes the ghost/s by shooting holy water out of a squirt gun into a few cabinets in the kitchen.

With only one room down, he puts his palm out for payment. In this case, Ray might be right, it isn’t worth $450. Despite this, his wife, Lucy Linskey (played by Trini Alvarado, who looks so much like Andie MacDowell I had to double-check the credits) is a believer. Being trapped on a levitating, spinning bed, like something out of The Exorcist, can make a believer out of a lot of folks. 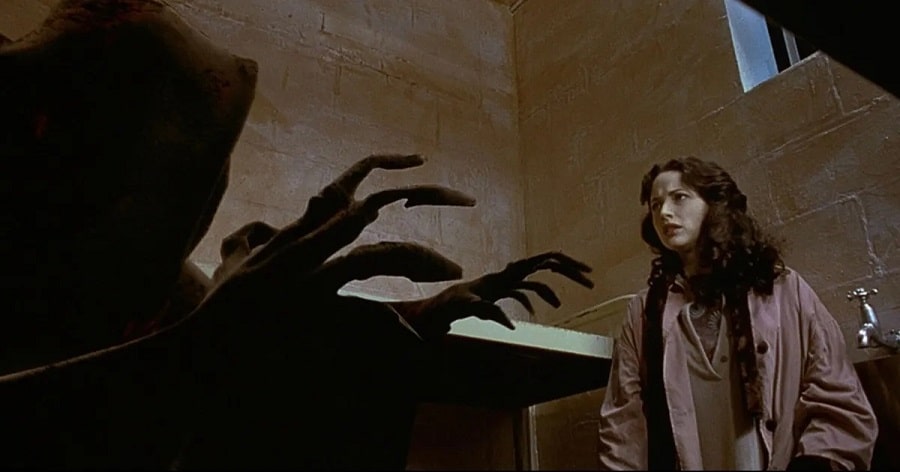 The Grim Reaper in The Frighteners

While Bannister is faking it with the rubes, he actually can see ghosts. He spots the most powerful ghost he’s ever seen, wearing the cloak of the Grim Reaper. It’s able to kill both the living and the dead. Bannister can tell who’s next among the living by ghastly, spectral numbers that appear to be carved into their foreheads. No one else can see the numbers or the Grim Reaper. Bannister’s the only one who can stop this death-dealing ghost. For extra motivation, he realizes it wasn’t the car accident, but this specter, that killed his wife.

The Grim Reaper cloak is a disguise donned by the ghost of notorious serial killer Johnny Bartlett. Jake Busey plays this role with gusto. (He’s a lookalike to his dad, in Gary Busey’s wilder days.) He sports the bleached, flat-top haircut that Charlie Starkweather wore.

Dee Wallace Stone (of E.T. fame) portrays Patricia Bradley, Bartlett’s girlfriend and co-conspirator. The two butchered a whole slew of people in the town’s mental asylum back in 1964. Bartlett, like Starkweather, got the electric chair.

Even while dead, Bartlett is lusting to beat the body-count of other notorious serial killers. He and Bradley were one away from pulling even with the Starkweather/Fugate record, so when Bartlett’s ghost powers up, thanks to Ouija board activity, he gleefully continues the spree. 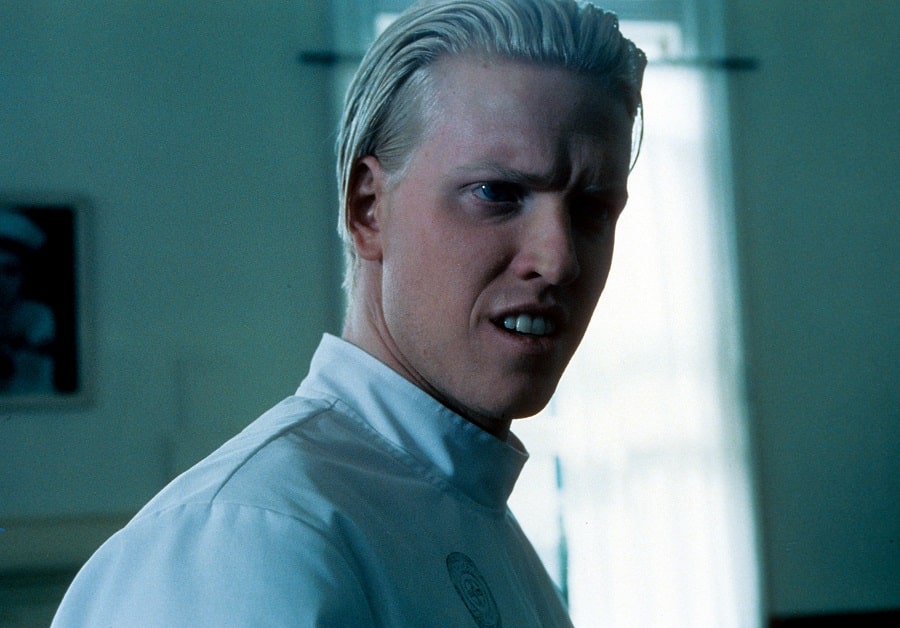 Jake Busey in The Frighteners

Bradley did not grow up in prison like Caril. Instead, she was remanded to her mother’s cold, cruel custody. She’s grown up and old as a prisoner inside that grim, foreboding, Victorian house. She’s not even allowed out in the yard. Her mother dictates her every move.

There are no lack of hurdles for our ghostbusting Bannister. The local newspaper is trying to prove he’s a hoax. An FBI agent thinks he’s the actual serial killer. A graveyard guardian (who was a Master Sergeant while alive and continues to revel in that role after death) doesn’t approve of him. He has firepower that can kill the living or the dead, and he’s not afraid to use it. He’s played by R. Lee Ermey reprising his role from Full Metal Jacket.

Later, Bannister witnesses the final death of his ghost pals, Cyrus and Stuart, who sacrifice themselves so he and Lucy Lynskey can escape. As Bannister is falling in love with the recently-widowed Lucy, he realizes she’s next on Bartlett’s murder list. If all that wasn’t trouble enough, Ray Linskey was recently killed by Bartlett, and now Bannister’s got his ghost pestering him, expecting Bannister to pass along messages to Lucy, so he can continue to order his wife around. Ray’s constant presence makes dating his widow difficult. 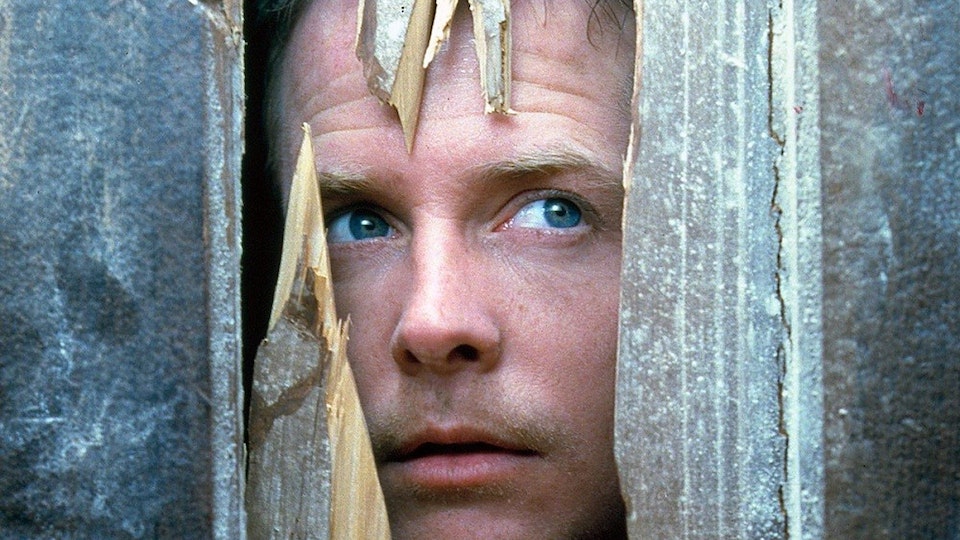 One of the more difficult things to watch in the movie, for me, was Lucy being so passive and allowing her dumb-jock of a husband to override her on things, when she’s a well-educated, successful doctor who has no problem advocating for her patients and courageously faces down things that would have others hiding under the covers.

That may explain why the scene that most pulled me out of the movie was when Bannister meets Lucy at a fancy restaurant, the ghost of her dead husband Ray at his side, so he can pass messages between the ghost and the (not so) grieving wife. And, you know, get to know her better. It mimics the movie Ghost with Bannister playing the Whoopie Goldberg sassy psychic, and Ray in the Patrick Swayze ghost role.

The trouble is, Ray has been portrayed as an out-of-time, Biff Tanner (from the Back to the Future franchise). Ray’s a misogynistic, dim-witted, bully, jock who seems straight out of the 50’s. Most of the segments he’s in have a 1950’s “perfect white picket fence” feel. In this case, the picket fence is owned by the Lynskys. Jackson uses the same metaphor for disaster — Michael J. Fox crashes through it with his car — as the directors of Doc Hollywood and Back to the Future used. It was just one more inside joke. The Back to the Future reminders steamroller the scene, as they do anytime Ray is on screen, alive or dead.

The homages and pastiches and inside jokes are intentional and could easily be a trivia game. There’s lots of playing with character names referencing real or fictional people. For an interesting, if incomplete, list of these sorts of things, you can visit the “movie connections” segment at IMDB.

My reactions to the movie on first and second viewings were much the same: the special effects are the true star of the movie. They are frequent, and outstanding. As for the rest of it, it had some fun moments in its blatant pastiches, but the humor and horror didn’t gel for me.

I’ve never understood why it sorta died at the box office. Sure, it wasn’t Back To The Future, but it was clever and funny.

Good question! I totally missed it at the box office, and didn’t see it for nearly a decade, urged on by countless friends.

I read an explanation of that. I’ll have to see if I can find that again. But short answer: it was supposed to be an October release, but one of the films slotted in the summer blockbusters position was running way behind, so the studio put a rush on the production and release of THE FRIGHTENERS to fill that slot.