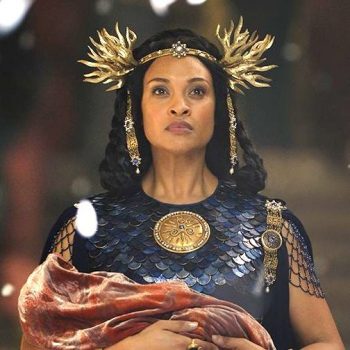 Talking The Rings of Power continues; wherein I look at something good, and something bad, about one element of the show. Then I talk a lot more about Tolkien’s actual writings about it. THIS SERIES IS FULL OF SPOILERS – related to the show, and Tolkien’s writings. You have been warned!

I’m still working on the Numenor entry, as that Middle Earth version of the Atlantis story is a favorite. This week, I’ll look at Miriel, a tragic figure in The Silmarillion. Hurin, Thrain, Beren, Fingolfin, Miriel – lot of tragic characters in that book.

Miriel is the Queen Regent of the mighty human nation of Numenor. Her father, Tar-Palantir, is a bit brain-addled and she is ruling in his stead. He dies in the final episode, which will formally make her queen. Though, she’s on a boat, coming back to Numenor, blinded from evil doings in the Southlands.

Cynthia Adddai-Robinson does a pretty good job as Miriel. Miriel is merely Tar-Palantir’s daughter and does not rule at all in The Silmarillion. So, the RoP folks are once again playing pretty free with the storytelling; but not quite fast as usual.

Miriel is haughty, intelligent, thoughtful, and we see her nobility of character. Kind of snotty, which befits a Numenorian, but also representative of the ‘good ones.’ They became a rather bad lot, and I’m sure we’ll see the opposite side of the coin, in Pharazon.

Her visions of the failing of the White Tree (Nimloth)and the downfall of Numenor are an adequate portrayal of the prophecy of Tar-Palantir. Tar Palantir foresaw that when the the tree perished, so would end the line of kings.

Silmarillion fans know Tolkien wrote conflict between her and Pharazaon. The character has been developed well for this. Assuming the show follows some version of the book’s events.

Honestly, not much to complain about so far. The showrunners made her Queen Regent, which she wasn’t. They had her show Galadriel the Palantir (Every bit of that has zero Canon to it). They sent her to Middle Earth, which she never visited. They blinded her, which didn’t happen. Basically, the only thing they kept was her name and that she was the King’s daughter. But the changes they made worked for season one, within the framework of the story line. And frankly, they made her a better character than Gil-Galad

Side Note – Gil Galad is my favorite elf in the Legendarium. He was a great hero and king. Why they’ve made him an obnoxious twit is beyond me. Not every elf ruler has to channel Thranduil in Peter Jackson’s The Hobbit movies.

All this made-up Miriel stuff could be groundwork for a debacle in coming seasons, but I’m not going to assume that. While the entire harfoot presence is a festering pile, season one of Numenor worked, and Miriel, so far, works. So, not too much bad – yet.

They compressed 1,300 years into one point in time for this show. That was clearly gonna have a major impact on Numenor. The story of Miriel and Pharazon has to be huge, since, as Canon, it runs up to the last second of Numenor. So, putting Miriel in the center of the show was going to require a lot of weaving from whole cloth. Which they did.

Miriel is the only child of Tar-Palantir, twenty-fourth king of Numenor. The Numenoreans had fallen under The Shadow and moved further away from the Valar, and disdained their long friendship with the elves. They stopped using elven names and became cruel tyrants to the people of Middle Earth. 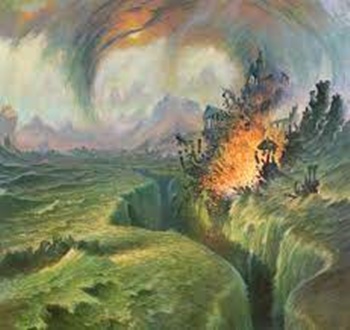 The people split into two groups. The King’s Men followed the kings and grew more hateful of the Valar and jealous of the elves. The minority, the Faithful, still respected the Valar and sought friendship with the elves. Tar-Palantir (whose actual name was Inzilladun, but took the old-form name as a sign of a return to the old ways) repented and sought the blessings of the Valar for his people.

They rejected his entreaties, and he wasted away, looking to the West and longing for a ship to come and restore relations. Nope. His brother led The King’s Men, and when he died, his son, Pharazon, who had roamed Middle Earth as a conqueror, returned and led the rebellion.

That sets us up for Tar-Palantir’s death. Miriel should become the fourth queen of Numenor, Tar-Miriel. We don’t get details, but Pharazon took Miriel to be his wife – against her will. This was against the laws of Numenor, but he did so anyways, changed her name to Ar-Zimpraphel, his name to Ar-Pharazon, and usurped the throne. He illegally became the twenty-fifth and last King of Numenor.

That’s mostly background to Miriel’s story. That’s because there are only two things in the Canon regarding Miriel. That was the first: she is Tar-Palantir’s daughter; Ar-Paharazon forcefully marries her; changes her name; and steals the thrown.

The only other mention we get, is her death. When the seas sweep over Numenor (which we see predicted in the show), she tries to climb Meneltarma (the Holy Mountain). It was sacred to Eru Iluvatar and represented the good of the Numenorians. But she didn’t make it, as “the waters overtook her and her cry was lost in the roaring of the wind.”

That’s it. Miriel should have been the queen of the mightiest nation of man. Instead, upon the death of her father, she knew only woe and grief, unto death. She is yet another of the tragic figures that Tolkien seemed to enjoy writing about in the history of Middle Earth. 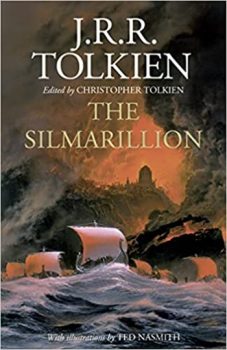 The Numenor story (Akallabeth), like all of the Middle Earth saga, changed and grew over time. Miriel’s character underwent some revisions.

Amandil was Elendil’s father. He had a brother named Elentil in versions of Akallabeth. Elentil did not make it into The Silmarillion, but in one version, Elentil was in love with Miriel (her early name was Zimrahil, but we’ll avoid confusion here). But she was infatuated with Pharazon’s beauty and wealth, and the two married (willingly) in defiance of law.

In a second version, Elentil and Miriel are engaged, when she dumps him for Pharazon.

In yet a third, the two were in love with each other and about to be engaged, when Tolkien abandoned the whole concept. It appears at this point that he decided to drop the idea of any kind of backstory to Miriel and Pharazon’s marriage, and simply had Pharazon take her unwillingly and declare himself king.

In an essay I’m working on related to “The Quest of Erebor,” I mention that I would love to see a series consisting of thirty-minute episodes: Tales of Middle Earth. Obviously, The Quest of Erebor would be one. The story of Baldor (the skeleton found on the Paths of the Dead), another. But some speculation on Elentir, Miriel, and Pharazon, would make a neat story. In one and two above, you’ve got a femme fatale kind of thing going on. In the third, star-crossed lovers.

By the way – The Numenorians were men who aided the Valar in the war against Morgoth at the end of the First Age. As a reward, the Valar gave them long life and a place to live. They brought the island of Numenor up from Great Sea. So, Numenorians were blessed by the Valar, and had close ties with the favored race of elves, as well. Which makes their actions and ultimate demise even more depressing.