I was intrigued by my buddy Jeffrey Ford’s brief but enticing description of J.G. Ballard’s novel The Crystal World on Facebook yesterday:

I read it years ago, but I still remember it very vividly. It had this dual sensibility of being really pulpy and yet wonderfully deep. The slow and then quickening crystalization of the world is freaky. And the description of the narrator finally outmaneuvered by it and overtaken is both frightening and beautiful.

When it comes to the beautiful and the weird, Jeff knows what he’s talking about. His marvelous short story “Exo-Skeleton Town” appeared in the very first issue of Black Gate (way back in 2001), and won the Imaginaire Award in France a few years later. Jeff’s novels include The Well-Built City Trilogy, The Portrait of Mrs. Charbuque (2002), The Shadow Year (2008), and Ahab’s Return: or, The Last Voyage (2018).

What about The Crystal World, then? Jeff’s short review sent me in search of more info, and it wasn’t hard to find. Here’s a snippet from Eric McMillan’s article at The Greatest Literature of All Time blog.

If The Crystal World were a typical science fiction novel about an impending global disaster, it’d have scientists and military heroes working against the clock in suspenseful attempts to stop the apocalypse. In J.G. Ballard’s world, however, that isn’t the drama which unfolds. The crystallization threatening our planet has been working through the entire universe and is inevitable. There may be authorities somewhere trying to defeat the transformation spreading across our planet from three locales, but that isn’t part of this story.

The central conflict in The Crystal World has to do with how certain powerless characters in one place respond to it psychologically. And how they do is almost as bizarre as the strange phenomenon itself.

But my favorite reviews was Rob Freeman’s 2015 piece at The Guardian, which called it “a petrified apocalypse.”

The Crystal World was published in 1966 and forms part of a post-apocalyptic triptych that also includes The Drowned World and The Drought. Although it contains similar tropes to those two novels – environmental catastrophe, Freudian thanatos, inner space – The Crystal World is a much more beautiful, and more violent work.

The book opens with a doctor, Edward Sanders, standing at the bow of a steamer in the Matarre estuary in the Cameroon Republic, watching the rippling water and a strange light over the forest near the diamond mines upriver. The scene is a chiaroscuro of dark and light, the blackness of the river below the ship set against the glow in the sky. He meets an architect in white linen and a priest in black soutane. “Day and night,” another passenger remarks looking out over the river, “do they mean much any longer?”

Sanders is travelling to the forest to find his former lover, Suzanne Clair, a doctor working at a leper colony near the mines. He hires a boat, another Ballardian hero on a doomed journey, this time to a forest of motionless crystal. Suzanne waits for him in her hospital like a god outside time, a Norma Desmond surrounded by frozen relics.

The Mont Royal forest, where the mines are situated, is the epicentre of a pocket of crystallisation, the result of particles of “anti-time” colliding with particles of time (as anti-matter and matter collide and destroy each other). Soldiers and explorers venturing too far into it have started to petrify into quartz, the atoms of their flesh becoming frozen in time. This process creates displaced but identical images of the same material object in almost the same place – flat, dense versions of the same image echoing outwards, crystallised. At the port downstream in Matarre, Sanders watches the body of a dead man with a crystal arm being washed downriver, rainbows glowing in his emerald eyes.

Sanders discovers that the waters of the Matarre reverse the effect of the crystallisation, washing the body clean. But as he finds out to his cost, the crystals are not a veneer encasing a body – they are the body. The cleansing effect of the river is not restorative, it is scouring. The doctor finds an army captain lying on the bank of the Matarre, half-crystallised but still breathing. He positions him on a log to float downstream, so he can be rescued back at the port. The captain reappears several chapters later in the forest, having dragged himself out of the water – one-armed, one-eyed, and with half a face, scraped to bits by the river. “Take me back!” he screams at Sanders. The doctor runs, and the captain’s corpse lumbers back into the forest. 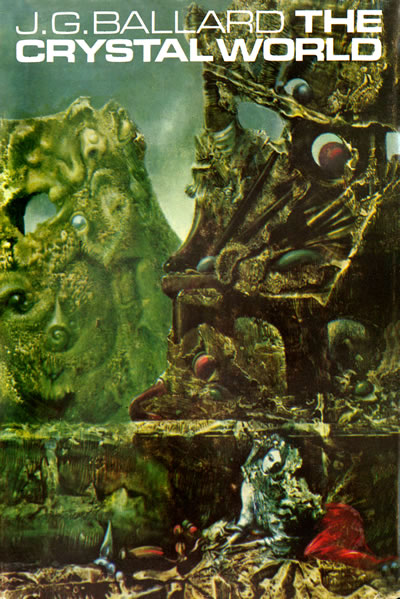 The Crystal World was published in hardcover by Jonathan Cape in 1966, and reprinted in paperback in the US by Berkley Medallion in March, 1967. The paperback edition is 160 pages, priced at 60 cents. The cover artist is uncredited.

That Max Ernst painting is a great cover illustration for The Crystal World . Been too long since I read the novel, so it may be time to suggest it to the monthly sf/f group as a chance to re-read it.

And “Exo-Skeleton Town” was its own surreal ride into a downward spiral of Hollywood classics and alien-produced (to put it mildly) aphrodisiacs. Congrats, Mr. O’Neill, for having the smart sense to publish it.

It’s Ballard’s strangest apocalypse, the most extreme metamorphosis to which he subjected the world and its inhabitants, and the one that makes his ambivalence about these transformations the clearest; the crystal death which overcomes the earth is eerily seductive, overpoweringly beautiful. Is it a calamitous catastrophe or a consummation devoutly to be wished?

Damn! There was no one like Ballard – time to reread him!

Fantastic novel that I revisit every few years, as I do all of Ballard’s novels and short stories.