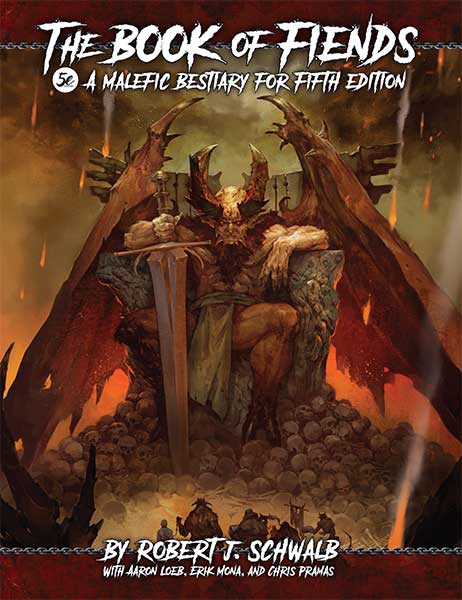 It’s a cliché to say that a good role playing campaign is like a satisfying fantasy series, packed with realistic characters, compelling action, and vivid settings. It’s more accurate, I think, to say that truly great role playing shares an essential ingredient with the best fantasy. I mean, of course, that it’s all about the villains.

Want to keep your players coming back, clutching well-worn character sheets and eager for action? You need challenges worthy of their time, and you won’t get that with the same generic dragons week after week. You need truly malefic opponents with legendary skills, cunning agendas, and awe-inspiring magic at their disposal.

There are some terrific resources out there to help you craft really memorable villains, but for my money the best one on the market is The Book of Fiends by Robert J. Schwalb, with Aaron Loeb, Erik Mona, and Chris Pramas. It’s a massive 254-page tome filled to the brim with inventive and truly original infernal menaces for Fifth Edition Dungeons & Dragons. There isn’t another book published in the last five years I’ve drawn from as heavily for my own game as this one. I don’t care why kind of RPG you play, The Book of Fiends will up your game. 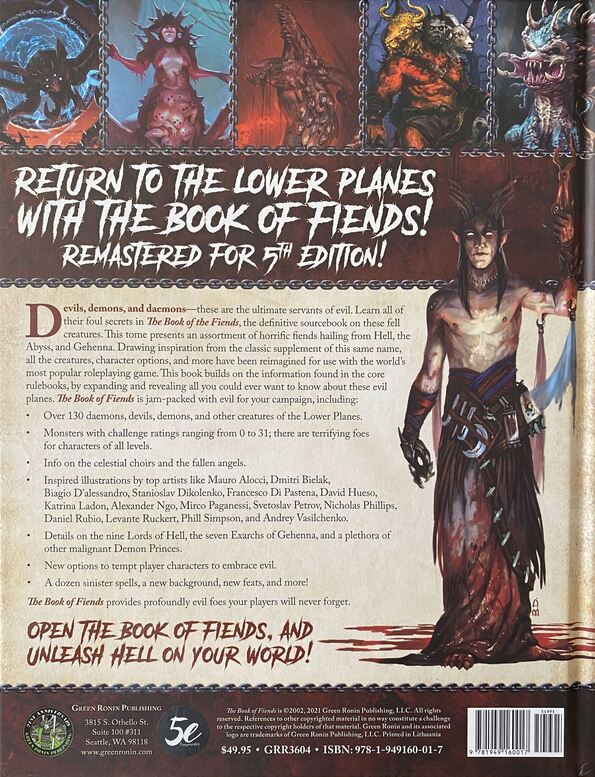 Back cover of The Book of Fiends

Let’s start with the book’s greatest strength: the artwork.

Let’s face it, when it’s down to the wire, your players are showing up in three hours, and the only thing you have prepared is a bowl of snacks, your best friend in the world is a good monster compendium. I’ve put together entire gaming sessions just by flipping through The Book of Fiends, stopping at a single illustration, and saying out loud, What the hell is THAT?

The book is filled with the kinds of creatures you can build really memorable encounters around. And that starts with the striking and original visuals. The Book of Fiends has some of the best (not to mention the creepiest) artwork in any monster book I’ve ever seen. 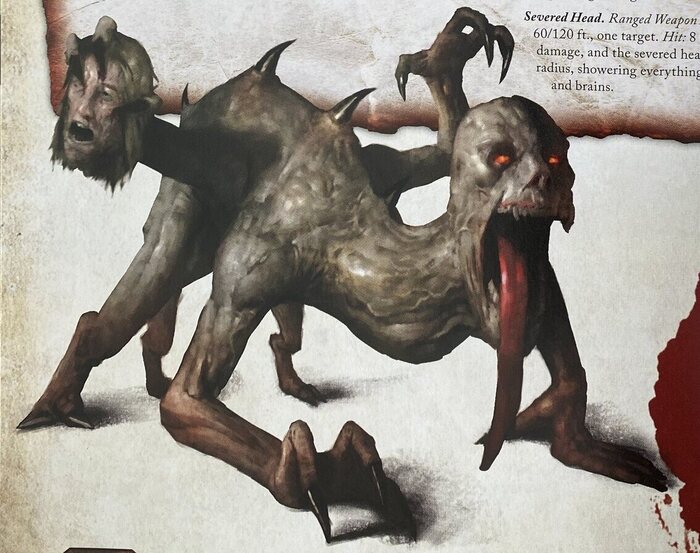 One ugly dude: The Harbinger of Vengeance, from The Book of Fiends

Take for example The Harbinger of Vengeance, a crawling menace that (among other gruesome hobbies) collects heads, and telepathically dominates its victims.

Harbingers goad mortals to seek revenge for transgressions of all kinds, and are summoned from the infernal planes when those same mortals commit inexplicable acts of mercy that spoil their fun. They hunt down both the forgiver and the forgiven to balance the scales of vengeance and ensure that all sins are punished. And maybe gather a few heads for their collection in the process.

The artwork in this book is ideally suited to share with your players at just the right moment. I guarantee that when they get a glimpse of the Harbinger, slowing creeping over a hilltop in their direction at sunset, the first thing out of their mouths will be a variation of what my own players said: “What the hell is THAT thing??” 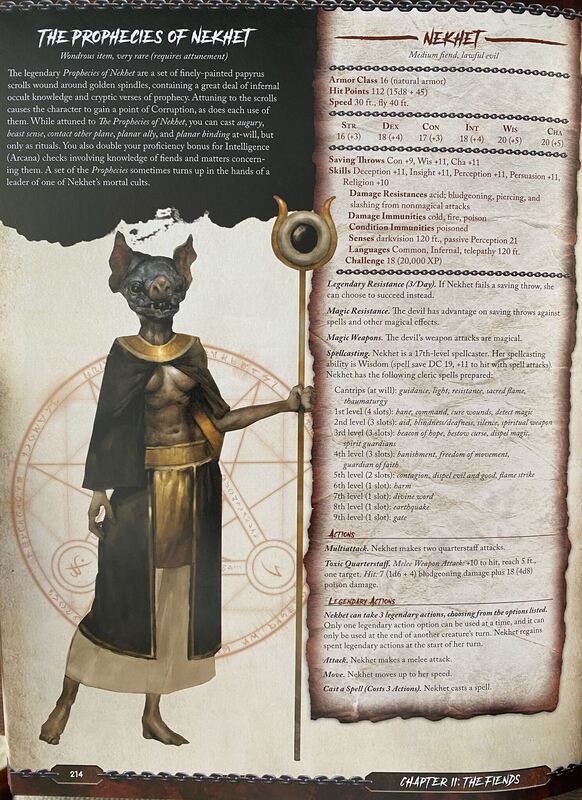 Many of the creature creations here are ideal to drop into a campaign for lively and different encounter sessions. But there are plenty suited for more ambitious purposes, powerful entities with sinister agendas that you can craft mini-campaigns around.

Like Nekhet, daughter of Set, and her brother Krotep. Consumed with nurturing cults of Set to spread her father’s vile influence, Nekhet has her sights firmly set on her own ascension to godhood, and both the ambition and power to make it happen. She’s a formidable opponent with considerable powers of prophecy and a sizeable army at her beck and call, and I can think of a dozen ways she’d liven up any campaign, including mine.

Jalie Squarefoot is a former pit fiend in the court of Mephistopheles who survived an assassination plot — well, maybe survived is putting it too strongly. Who was successfully assassinated, but returned as a lich to thoroughly destroy his rival, and since then has risen swiftly through the ranks of the court as a diabolical lich fiend. His undead nature gives him several unique abilities. Probably best if you don’t inquire what they are (click his image above if curiosity overwhelms you. Don’t say we didn’t warn you.)

Antaia the Witch Queen is the mother of evil witches, and a minion of Belial, lord of the Fourth Circle of Hell. She is worshipped as a goddess on a hundred worlds in the Material Plane, and teaches her followers potent sacrificial magic that allows them to draw power from human sacrifice. 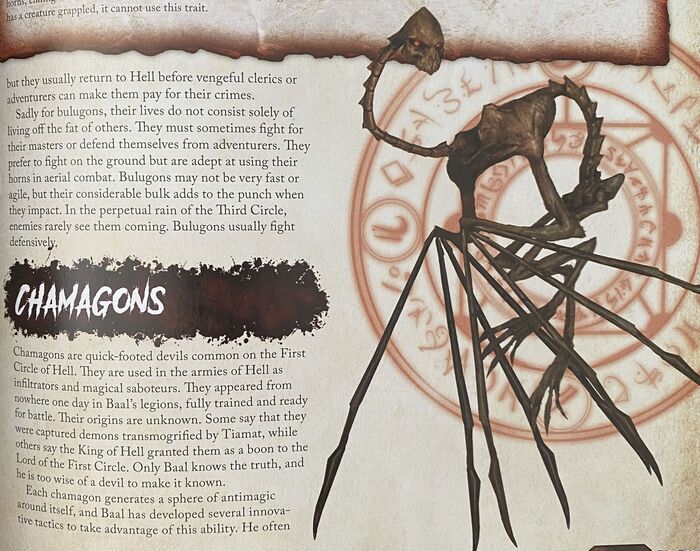 Not everything in The Book of Fiends is so high-powered that you need to build an entire campaign around it. Like all good monster manuals, it has a wide assortment of creatures at varying powers levels.

Chamagons are a fine example — roughly as powerful as frost giants, they are hardy foot soldiers in Baal’s legions that generate antimagic spheres around themselves. As I’m sure you can imagine, that can be a nasty surprise for overconfident players.

The loathsome Spineseeker, and the demonic Naamah

Two of my favorite creatures in the book are the shudder-inducing spineseekers and the grotesque stitchfaces. Spineseekers feast on anything they find (including other denizens of the Nine Hells), by grappling their prey and winding tendrils around their spinal cord, taking control of their victims. Stichfaces are essentially animated sacks of worms that disintegrate as they take damage, spraying deadly maggots at everyone in range.

Naamah, the Contessa of Duplicity, is a fallen astral deva who once served the Heavens, but became entranced with mortal’s abilities to love, and lie. She became a master seductress herself, and when she was finally unmasked by the solar Uriel, he permanently altered her beautiful form to reveal her many duplicitous faces. She was cast in the Pit and is now a loyal servant of Belial. 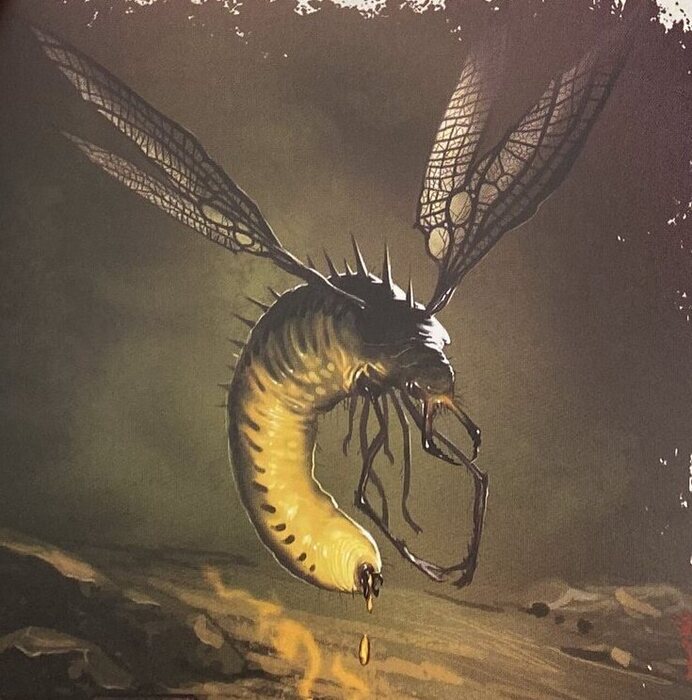 Those with an excess of pride may find a glomeray in their future. Yuck!

There’s a rich body of literature warning about the sins that lead us to Hell, and The Book of Fiends makes good use of all the classic themes, with some 70 pages of Deamons of Wrath, Envy, Lust, Sloth, Gluttony, Greed, and Pride.

Some of my favorites in this section include the glomerays, who are drawn to the prideful, and whose whispers feed their ego and drive them to destructions. And the enticers, whose victims are those so convinced of their purity that they are blind to their own sins. They lodge themselves in these mortals, nurturing them along until the right moment, when they emerge and give birth to a virtual evil twin. 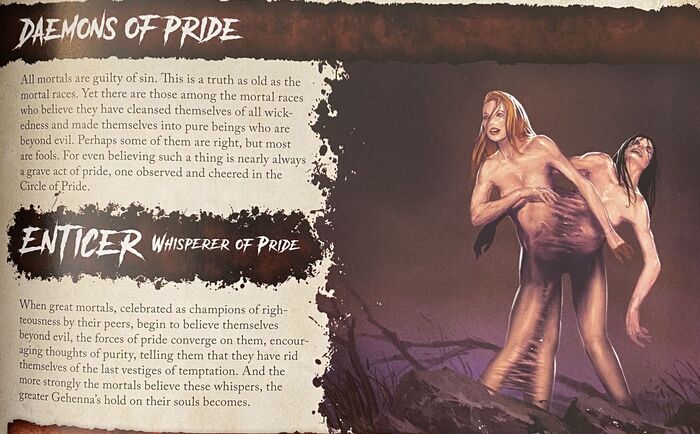 An enticer at work

The Book of Fiends has over a hundred entries — demons, devils, daemons, and other cursed beings. There are also detailed sections on the Planes of Perdition (the Abyss, Gehenna, and Hell), and the Servants of Evil, including new character options, feats and spells.

The Book of Fiends is the most useful gaming book I’ve purchased in years. It’s wonderfully written, tightly organized, and beautifully (albeit rather disturbingly) illustrated. It gets my highest recommendation.

The Book of Fiends was written by Robert J. Schwalb with Aaron Loeb, Erik Mona, and Chris Pramas. It is a greatly expanded and revised version of the original Book of Fiends published by Green Ronin in 2003 in the d20 era. The new version has been remastered for Fifth Edition, and was published by Green Ronin on March 8, 2022. It is 256 pages in hardcover, priced at $49.95 in hardcover and $24.95 in PDF.

But most of that was just … super gross.

There’s definitely a high ick factor to much of the artwork (and the demons and devils within!)

I guess it’s too late to provide a trigger warning…?? 🙂