Charles L. Grant was a major figure in 20th Century horror, not just as a writer but as a talented editor. He edited dozens of horror anthologies, including eleven volumes of the groundbreaking Shadows series from 1978-1991. He produced over a dozen novels, but is remembered today primarily for his powerful short fiction, gathered in three major collections: Tales from the Nightside and A Glow of Candles and Other Stories (both in 1981), and the retrospective Scream Quietly: The Best of Charles L. Grant (PS Publishing, 2012). He died in 2006.

Grant received the British Fantasy Society’s Special Award for life achievement in 1987, and the Lifetime Achievement Award from the Horror Writers of America in 2000. He was honored with two Nebula Awards and three World Fantasy Awards for his writing and editing. Sadly, little of his work remains in print, and his collections can be hard to come by. I recently managed to track down a copy of A Glow of Candles, and it was well worth the effort.

A Glow of Candles contains most of his award-winning short fiction, including his two Nebula Award winners, “A Crowd of Shadows” and “A Glow of Candles, a Unicorn’s Eye.” From John Clute’s entry on Grant at the online edition of the Science Fiction Encyclopedia:

He began publishing work of genre interest with “The House of Evil” for The Magazine of Fantasy and Science Fiction in December 1968; of this early work, “A Crowd of Shadows” (June 1976 F&SF) and “A Glow of Candles, a Unicorn’s Eye” (in Graven Images, anth 1977, ed Edward L Ferman & Barry N Malzberg) both won Nebulas and are, respectively, his best short story and best novelette.

Kevin Lucia has a thoughtful and very insightful piece on Grant’s short fiction at the Cemetery Dance website, and he touches on Grant’s introduction and several of the stories in A Glow of Candles.

This sentiment haunts me. It has since I first heard it quoted by Robin Williams in Dead Poets Society. The quote in its entirety, by Henry David Thoreau, is even more chilling:

The mass of men lead lives of quiet desperation, and go to the grave with the song still in them.

I never had the honor of meeting Charles Grant. I don’t what he was like, in private or in person. I was struck, however, with this statement from his introduction to his short story collection, A Glow of Candles and Others:

…asked me if I could characterize my protagonists. I hesitated only a moment before saying, ‘They’re lonely.’
— A Glow of Candles and Others, by Charles Grant – Introduction

It makes me wonder what Charles Grant thought of Thoreau’s line. It certainly implies there’s a good reason I was so powerfully impacted by his short fiction when I first encountered it. The characters in Grant’s short fiction, especially, seem to lead lives of quiet desperation. It’s that desperation which often proves their undoing in the end, either because of what they’ve done to themselves or what they’ve opened themselves up to, or the forces they find themselves at the mercy of, because of their desperation…

Like the tired bank teller who seem a little preoccupied when handling your deposit… The tired and worn out English teacher not brave enough to buck his overbearing Department Head, who because of his “cowardice” draws the vengeful ire of a younger and more passionate colleague in “The Rest is Silence.”

And when the supernatural, out of the “ordinary-this-is-NOT-normal” plot twist does come into play, if you’re blinking you might miss it, or it was there all along, and you didn’t even know it…

Grant’s short stories are populated by heartrendingly ordinary people. Frustrated teachers. Tired widows. Retired cops looking for somewhere to fit in — like in “When All the Children Call My Name.” When Kit finds a beat which still needs him, he fears it might be the end of him. Out of work writers and playwrights in far flung dystopian futures. A toll booth operator at the outskirts of Oxrun Station, a man desperate to leave for something better, who is consumed by forces beyond his control in my personal favorite, “Coin of the Realm.”

A Glow of Candles contains a dozen short stories and novelettes, including perhaps his most famous story “Temperature Days on Hawthorne Street,” which was filmed as the episode “The Milkman Cometh” of Tales From the Darkside, broadcast on January 25, 1987. Each story gets a short introduction by the writer.

A Glow of Candles was published by Berkley Books in November 1981. It is 215 pages, priced at $2.25 in paperback. The cover is by Jill Bauman. It has never been reprinted, but Crossroads Press released a digital version in 2020, and an audiobook in 2021.

I bought this when it came out. I never thought Grant got quite the recognition he deserved, falling between the overstuffed chairs of King, Straub, and Koontz, but he was a very fine writer.

My first exposure to Grant was The Long Night of the Grave, the last novel in his Oxrun Trilogy, which I read the year it came out, 1986.

Honestly it was a terrible place to start, as the Oxrun trilogy is a tribute to the classic monsters (Dracula, the Wolfman, and the Mummy), and the climatic scene — which has our hero running from the Mummy, honest-to-god the slowest-moving monster in the world, and constantly TRIPPING so that there’s any tension at all about whether he’ll be caught — very nearly had me give up 10 pages from the end.

I didn’t discover Grant’s short fiction until much later, and I’m glad I did. 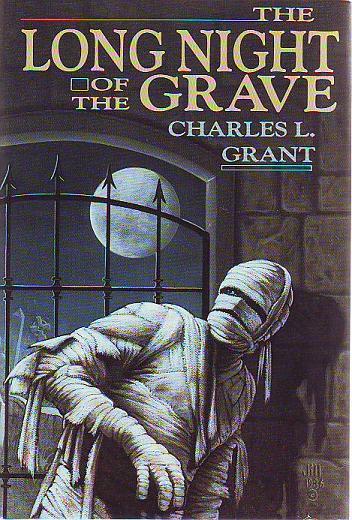 I read Long Night last October (I read a horror novel every Halloween season) and the previous two years I had read Grant’s other two “classic monster” Oxrun novels. Grave was definitely the weakest. I thought the first one, The Soft Whisper of the Dead, was by far the best. Give me a no-nonsense vampire any time!

Review! Would love to hear your thoughts on the whole trilogy.

Thanks for this post, John. Grant is one of my favorite writers of dark fiction at short lengths and deserved to be better known.

Hey, John, I just checked Amazon, and there is an electronic edition for $3.99. And an Audible edition as well.

Keith — right you are! Looks like Crossroads Press released a version of Kindle in 2020, and an audiobook a year later in 2021. I will have to check out the audiobook.

I have updated the text above. Thanks for the catch!

Just bought a digital copy. Thans a lot for the tip!

In doing my reviews of the old DAW year’s best horror, Charles Grant has been my hands down favorite discovery. I had seen his name on horror anthologies and horror lists but never got to him. He is a gem that should not be forgotten.

Dennis Etchison on the other hand . . .