F.M. Busby was a prolific SF writer in the 70s and 80s, with a number of popular series, including the Demu Trilogy and the Slow Freight trilogy. But his most ambitious sequence was Rissa Kerguelen, the tale of a young woman who leads a rebellion against a tyrannical Earth, which ran to eight volumes. It’s been out of print since the 80s. The book I want to talk about today is the final one in the sequence, a prequel of sorts, which focused on the origin of one of its most popular characters, Zelde M’Tana.

Zelde M’Tana is memorable for a lot of reasons. But the most obvious is that it featured a Black heroine on the cover, extremely unusual for a mass market paperback in 1980 (and, frankly, for the next 30 years). It’s one of the first times I can recall seeing a Black protagonist on a cover, and it certainty stuck out. I can’t recall exactly what I thought, but I’m reasonably sure that I took it as a marketing statement, a signal that the book was targeted for a Black audience, and I let it sit on the shelf while my eye wandered towards more comfortably familiar covers with white protagonists.

There’s a word in the English language for people like me, White folks who avoided books with Black people on the covers for reasons of simple unfamiliarity. That word is racist. 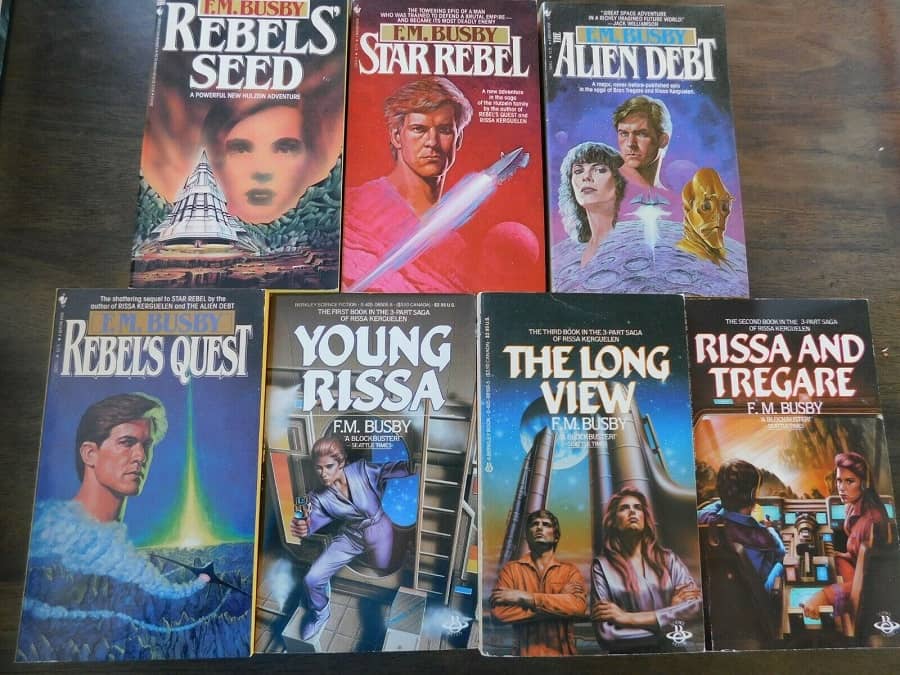 All seven volumes in the Rissa Kerguelen saga

I’m sure I would have been deeply offended to have been labeled a racist in 1980. But looking back with clear eyes, it’s obvious I had deep-set preconceptions about cultural normalcy, and they were strongly — and wrongly — centered on Whiteness.

It’s true that, at the age of sixteen, I hadn’t come up with those preconceptions all on my own. They were formulated in large part from what I saw on TV, in movie theaters, in advertising on billboards and magazines and, yes, on the covers of my favorite science fiction and fantasy novels.

As I got older, I discovered what most young adults of my generation did: that the picture of America I was being shown on TV screens and advertising didn’t reflect real life. It was a white-washed version of real America, one that largely marginalized or excluded people of color — and often women, except in highly sexualized roles.

So I can largely excuse sixteen-year-old me, and forgive myself for behavior that was pretty much the norm for Whites in 1980. But there’s no excuse for not labeling it what it was: racism. Prejudice (in this case, prejudice against books featuring certain protagonists) based strictly on skin color. Institutional racism, but still.

The publishing industry had a problem with Whiteness on covers right up until the last decade (and it still does, though arguably to a much lesser extent). It was this prejudice that caused famously Black characters to be depicted as White for decades — such as Eric John Stark, the dark-skinned hero of Leigh Brackett’s pulp adventures, who was casually portrayed as White on countless magazine and paperback covers until Erik Mona’s Planet Stories imprint finally gave us a Black Stark in 2008, some 60 years after the character first appeared in Planet Stories.

Publishers took much of the blame for this situation, and rightly so — though in fairness, putting minority characters front and center on a cover was a risky proposition as long as the market remained openly hostile. It was a catch-22, and those publishers who experimented with minority characters on covers (and there were a few brave souls who did, in the genre and out) saw few rewards for their efforts until recently. As usual, it fell to the small press to push the market forward, step by painful step, with the major publishers following along much more slowly.

The situation has been gradually improving over the past 15 years, and in just the last 5-6 years we’ve begun to see much more skin color on covers from major publishers.

This is more than just a gradual easing in White American’s tolerance for non-White protagonists on book covers — much more. In the past decade we’ve seen the genre open up to tales of the Black experience. Marvel’s Black Panther and Falcon and the Winter Soldier, HBO’s Watchmen and Lovecraft Country, Jordan Peele’s Get Out and Candyman, N. K. Jemisin’s back-to-back-to-back Hugos for her Broken Earth trilogy, and numerous other successful creators haven’t just torn down barriers — they’ve overthrown the regime and re-written the history books.

For the first time in my experience, there’s a genuine appreciation and hunger among a wide swath of American readers for tales with marginalized protagonists, whether gay, trans, Black, Asian, Native American, queer, or Other.

American publishing is undergoing a broad transformation. It’s hard to say what will happen over the next few years of course, but I don’t think it’s a stretch to predict that stories featuring exclusively White, male, non-queer characters — like virtually every popular SF and fantasy tale of the entire 20th Century — will eventually seem old-fashioned and distinctly unappealing to 21st Century readers.

I suppose I’d lament all that classic SF & fantasy being consigned to the dust bin, if I weren’t too busy enjoying an exciting new generation of genre talent.

Zelde M’Tana was the final novel in the lengthy Rissa Kerguelen series. Maybe that’s coincidence, or maybe the book sold like a dog because Americans at the time were silently racist and ignored it (I’m not trying to dodge personal responsibility here; I put the book back on the shelf and bought two installments of Perry Rhodan instead.)

Maybe Dell, for all their forward-thinking, hadn’t the slightest idea how to sell a science fiction paperback with a Black woman on the cover. (Why in God’s name would you describe your heroine as “pungent” in the back cover text???)

Whatever the case, there were no more novels of Zelde M’Tana, despite her earlier popularity with readers. And that’s a shame. I think Zelde M’Tana was a book ahead of its time, and I think readers today would enjoy it. I hope of few of you seek it out.

What do modern readers make of it? Here’s an excerpt from Harmonybites 4-star review at Goodreads.

Try finding a kickass heroine in science fiction before or anywhere near 1980, the year of this novel’s publication. Particularly try finding a kickass action heroine of that date, one written by a male writer that doesn’t make you, a woman, cringe. Try finding one with a heroine that’s black written in that era. Rare.

Not that the race or gender of Zelde is made a big deal of — that’s one of the book’s pleasures. It’s just a great rip-roaring space opera yarn. Zelde appears in the trilogy of books about Rissa Kerguelan, and this is a kind of prequel, so it’s certainly not necessary to have read those books — but after this one you’ll want to–at least if you love well-written space opera of the kind by Robert Heinlein, David Weber, Lois McMaster Bujold, Elizabeth Moon, this should really hit the spot.

All the books in the Rissa Kerguelen and Bran Tregare series are great fun — the ones I can find… These books are a pleasure, and I’m only sorry they’re not easily available — and that there aren’t more.

The Berkley Books paperback editions of Rissa Kerguelen, featuring the first appearance of Zelde M’Tana:
Young Rissa, Rissa and Tregare, and The Long View (Berkley, May, June and July 1984). Covers by Barclay Shaw

Rissa Kerguelen has kind of a complicated publishing history.

The first book, Rissa Kerguelen, was published in hardcover by Berkley/Putnam in September 1976, followed by the sequel The Long View in December that same year. The prequel Zelde M’Tana was first published in paperback by Dell in 1980.

Busby followed that trilogy with a new four-volume series called The Rebel Dynasty, published in paperback by Bantam in 1984. Just before the first volume of that series, The Alien Debt, appeared in June 1984, Berkely re-issued Rissa Kerguelen in paperback, splitting it into two volumes, Young Rissa and Rissa and Tregare.

To add to the confusion, the Rissa Kerguelen books (Rissa Kerguelen and The Long View) were reprinted in a single-volume paperback edition from Berkley Medallion in 1977, also titled Rissa Kerguelen (naturally). It was divided into three parts, and had a prologue and an epilogue. Parts 1 and 2, comprising the original Rissa Kerguelen, were titled “Young Rissa” and “Rissa and Tregare.” When the series was republished in paperback in 1984, it was broken into into three volumes, retaining the titles used here. The omnibus edition had a nice Richard Powers cover and is worth hunting down if you can find it (see below). 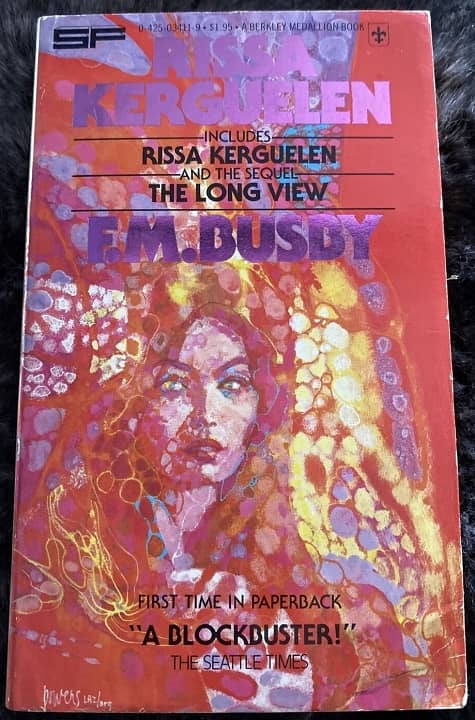 “Pungent”? I suppose we can be barely glad that they avoided calling her “colorful”. And in sf/f, we have less excuse for our shying away from folks who do not resemble ourselves, since the whole point of these genres is to explore the idea of being human from places that are outside of being human. How can we embrace olive-skinned Vulcans but not dark-skinned Eric John Stark?

Indeed! Well said, Eugene. I’m still shaking my head over that one…. who thought “pungent” was a good way to describe a protagonist?

Science fiction fans love to think of ourselves as open minded towards alien cultures. It’s different when the culture comes from across the street instead of across the stars.