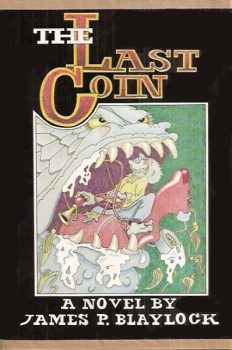 “…One pig to rule them all,

One pig to bind them,

One pig to bring them all

and on the pier-end find them

In Seal Beach, on the Coast.”

Myths of the Pacific Coast

My friend Carl started me down the path of becoming a James P. Blaylock reader when he tossed me an already worn copy of The Digging Leviathan (1984 — his third book. His first two, The Elfin Ship and The Disappearing Dwarf I’ve reviewed here on Black Gate.) With its cabals of conspiracists, hollow Earth theorizing, and besuited axolotls, I was completely enchanted with the book’s story of two boys in California in the middle of the last century in search of a connection with their absent or missing fathers. It’s rougher than his later novels, but here Blaylock was already introducing many of the tropes, and even characters he would revisit throughout his career.

When his next book, Homunculus (1986) came out, I ordered a copy from the long-gone local book store, The Book Nook, something I rarely did. It’s one of the books K.W. Jeter was thinking of — the others being his own Morlock Night and Tim Powers’s The Anubis Gates — when he coined the portmanteau steampunk in a letter to Locus magazine. I enjoyed the book, which turned out to be the beginning of the ongoing adventures of Victorian inventor-cum-explorer Langdon St. Ives and the villainous hunchback, Dr. Ignacio Narbondo. 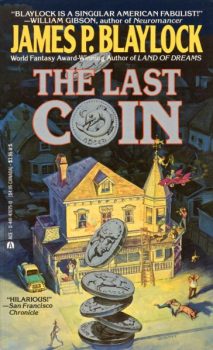 Next was The Land of Dreams (1987). It’s a bit of an homage to Ray Bradbury’s Something Wicked This Way Comes (1962), but it’s a lighter, funnier book. It also has giant shoes and spectacles washed up on the California shore, something Bradbury never had going for him.

1988, though, brought something extra special; The Last Coin. It’s the first of what’s been called the Christian trilogy, the other two being The Paper Grail (1991) and All the Bells of Earth (1995). It begins with a prologue not dissimilar to something found in an airport thriller. The mysterious Jules Pennyman is leaving Israel in possession of twenty-seven of Judas Iscariot’s thirty pieces of silver. Ownership of the coins promises him immortality and power. The remaining three are in California and Canada. Leaving at least one dead man behind, Pennyman sets off for the New World.

The book really begins in its first chapter, though, where Andrew Vanbergen is introduced hanging from a tree, holding a long pole with a noose on it, trying to remove some of the many cats from his wife’s aunt’s bedroom. Andrew and his wife, Rose, funded largely by her Aunt Naomi, have opened a rooming house and restaurant in Seal Beach, California. While he doesn’t hate the animals, he does hate the kennel-like stink they’ve given her room and that they’re always underfoot. As with many of Andrew’s plans, it all goes wrong, and soon all the neighbors, Rose, and two of their guests — among them Jules Pennyman — are outside trying to figure out what Andrew’s doing while he explains he was searching for a burglar he was absolutely certain he heard.

Later he spins a story of possums sneaking about the roof and into Aunt Naomi’s open window. He didn’t mention ‘possums when the neighbors were about, he explains to Rose, because they might call the health inspectors on them and that would be bad for business. This is typical of Andrew. He’s constantly cooking up elaborate schemes, often with the help of his newspaperman friend, Beams Pickett. When they misfire, as they nearly all do, instead of just admitting what he was up to, he concocts one ridiculous lie after another to cover things up.

Andrew is willing to work hard when necessary, but he’s distractable; always on the lookout for…something…those ineffable things that can sustain us in the face of the humdrum and plodding things that seem to take up too much of our time.

He opened the book at random — he’d read it often enough so that beginnings and endings meant nothing any more — and found himself dabbling through “The Piper at the Gates of Dawn.” Ratty and Mole were off to find the baby otter, lost down the river. Dawn was near. The world was turning toward the morning. There was faint music on the breeze, which stirred through the rushes. Something was pending — something… For a moment Andrew thought he knew what it was, that something. He did know, but he couldn’t at all put it into words. It wasn’t something you knew in your mind; you felt with your spine, maybe, and with your stomach. And it wasn’t the obscure machinations of men like Pennyman that you felt, either; it was something else, something that such men were ignorant of, or that they hated — that they didn’t have or want any part of, that they wanted to ruin. For that moment at least, Andrew knew that he himself wanted a part of it very badly, whatever it was. He closed the book and sat there. The late hour lent itself nicely to that sort of thing — to things of the spirit, so to speak. When the day dawned with its garages needing to be painted and its men in mystical hats coming around after rooms for rent, the feeling would be gone, dissipated, hovering just out of sight. But he would stumble upon it again when he wasn’t at all expecting it — the promise of heaven on the soft wind, “the place of my song-dream,” as Rat put it. Andrew isn’t content to just dream of those things; he’s an active pursuer. So when he senses odd doings all around, though he’s determined to do the right thing by his wife and make a serious go of their business, he can’t help allowing himself to get drawn into the growing vortex of mysteries and conspiracies that have begun to swirl around Seal Beach. When he and Pickett suspect Pennyman might be connected to the deaths of several coin collectors, they begin to spy on him. This leads, eventually, to a desperate fight outside a Chinese restaurant with Andrew and Beams doomed but for the intercession of a flock of salvific parrots. As Andrew dives deeper into the mystery of the silver coins, he realizes that the strange silver spoon Aunt Naomi has entrusted to his protection is far more than just something a pig gave her family.

There on the stoop had stood a pig, broad as a buggy, with a silver spoon in its mouth. It waited, watching the family gaping there, until the grandmother, very calmly and solemnly, took the spoon from between its teeth. The pig turned and ran away on idiotic legs, lumbering around the side of the chicken coop, out of their lives. The thin spoon was dented on the edge from the pig’s teeth, and there was an almost rubbed-off profile on the concave surface of it. If you held it in moonlight, and tilted it just so, it seemed to be the bearded face of a pharaoh, perhaps, or an Old Testament king with a stiffened beard and an unlikely hat. There was a moon on the other side, or maybe a curled up fish, or both, one inside the other; it was too dim and rubbed to tell.

Andrew is a man who struggles to hold on to the liminal while also being a good husband and getting the business off to a solid start. The two sides of his personality are constantly battling. Moments arise of real fear that his escapades and fabrications will seriously damage his marriage to Rose. The pursuit of life’s mystery might be a good thing, but the concrete world of real relationships and obligations can’t be neglected entirely.

Opposing Andrew’s approach to life is Jules Pennyman. He is a “whited sepulchre,” hiding murderous intentions and a thoroughly corrupt and rotted soul behind a dashing and gentlemanly exterior. He is the sort of man who would pave over every bit of greenery in order to make the world orderly and hygienic. When Andrew begins a campaign to discombobulate him, Pennyman is incapable of determining whether Andrew is stupid or supremely clever. A man like Andrew, so enamored of the “trifles” of life like “the cut of a man’s beard, the too-convenient discovery of forgotten money in a disused wallet”, is beyond Pennyman’s ken.

Vanbergen and Pennyman carry the weight of The Last Coin‘s narrative, but they are not alone. First, there’s the aforementioned Beams Pickett, a man who knows secret plots within plots operate beneath the surface of the waking world. Aunt Naomi, Andrew discovers, is a far better person than he ever suspected when they bond over breakfast cereal lore. Then there’s Rose’s Uncle Arthur, really only a close family friend. He lives in the local retirement community, Leisure World, drives a little red electric car, and carries out peculiar experiments with turtles.

If I haven’t been clear, this is a funny, funny book. Not a gag-a-minute book, but one populated by wonderfully off-kilter characters and celebrating the charming oddities and weirdness of life. It’s a world where Weetabix are contraband to be smuggled in from Canada, pigs play games in a parking lot, a Surinam toad moves in mysterious ways, and parrots arrive in the nick of time. Considering that Laurence Sterne and Robert Louis Stevenson are among his greatest influences (for a look at ten more of his inspirations, read this), this is unsurprising. When the climax arrives with the various players coming together on the municipal pier while Leviathan swims offshore and reports of a giant pig abound, it’s wonderfully bonkers. 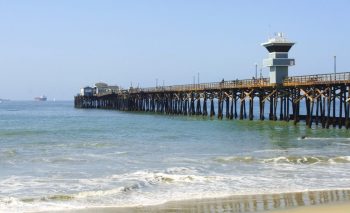 While the Langdon St. Ives books are humorous, Blaylock’s succeeding standalone contemporary novels are far more serious than The Last Coin. The Ghost trilogy, Night Relics (1994), Winter Tides (1998), and The Rainy Season (1998), are far, far darker stories. It’s as if he recognized the perfection of this book and decided to move in different directions. Blaylock is one of my favorite authors, alongside his friend and literary compatriot, Tim Powers. (Together, they created the fictional poet William Ashbless.) All his books are absolutely worth your time, but the one I always recommend to start with is The Last Coin.

Fletcher Vredenburgh writes a column each first Friday of the month at Black Gate, mostly about older books he hasn’t read before. He also posts at his own site, Stuff I Like when his muse hits him. About once a month, the Skull lets him write something at Tales from the Magician’s Skull.

I never pass a box of Weetabix on a store shelf without thinking of how it got smuggled in from over the border. Or wondering about floating a chef’s toque with helium. And when I “see” Andrew, I picture Andy (Jim Broadbent) in Mike Leigh’s film Life is Sweet, another work about a charming oddity who may be either stupid or supremely clever (or both).

That’s perfect! I immediately picked up The Paper Grail and will probably go straight on to All the Bells of Earth, afterward. They’re both so good, but The Last Coin is just even better.

[…] James Blaylock is an author on my longlist to try, so it was interesting to see a review of Blaylock’s The Last Coin at Black Gate. […]