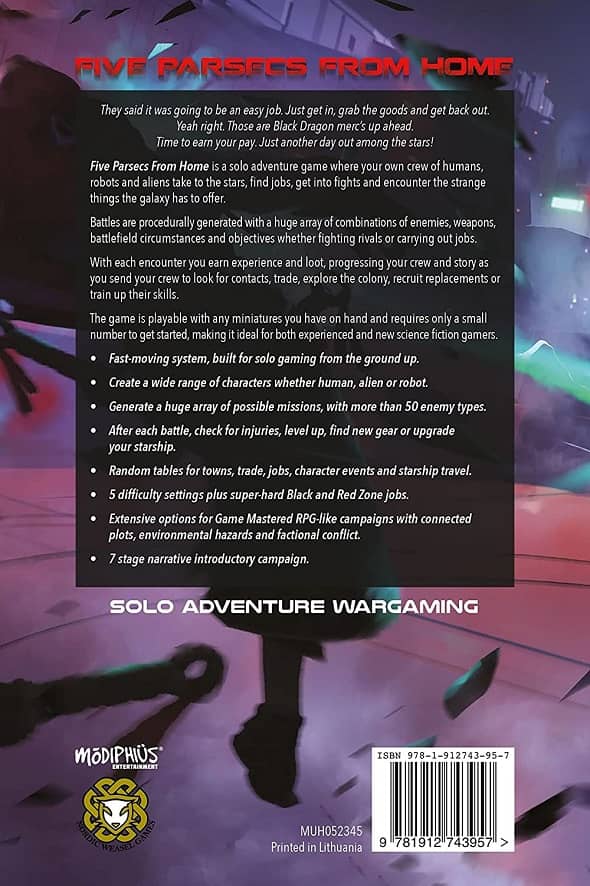 Back cover of Five Parsecs from Home

Five Parsecs from Home was released in hardcover and PDF late last year, and Five Leagues from the Borderlands is due to arrive in July. The former is a solo adventure wargame in a sci-fi setting, and the latter is a fantasy wargame that includes rules to add a friend or two for co-operative adventures. Both were written by Ivan Sorensen.

These aren’t paragraphed-based choose-your-own-adventure style solo RPPs, but rather story-generators that, with a little imagination, allow free-form campaigns where you can act out miniatures battles with small bands. There are tons of enemy types and unique foes, and lots of quests and jobs to take on as you level up your crew, improve your gear, and take on bigger quests and badder enemies.

I don’t have the back cover of Five Leagues to share with you, but here’s the basic product description from the website.

The last tomb was crawling with Grave Walkers.

The Tower held a fey sorcerer; we lost Tring there, blasted by eldritch fire; Artum fell as we ran from the trolls of the deep woods, but for now, the village is safe. Tonight we’ll restock the gear and recruit any travellers from the inn who fancy a share of the coin. Tomorrow we’ll take the woods, then bring down that cursed tower for good. Maybe then we can rest, but there are already worrying rumours from the next valley…

Five Leagues from the Borderlands is a solo adventure wargame where you take the role of a warband of heroes and adventurers, and explore a grim world full of monsters, enemies, creeping malice, and exciting quests.

The whole campaign is generated procedurally with each battle created from over 100 different enemy types, 17 unique foes and 6 scenario types that can play out in a wide number of ways. As you play, you will explore the game world, discover new locations and take on quests and jobs. Your warband will gain in experience and power and find wondrous loot… or die gruesomely in brutal combat.

The game is playable with any miniatures you may own and can be played on a 2×2 foot or 3×3 foot gaming table, making it ideal for players who are just getting started on fantasy gaming or for whom this is their first miniatures game. All you need is 6 figures for your heroes and a handful of suitable enemies to fight. 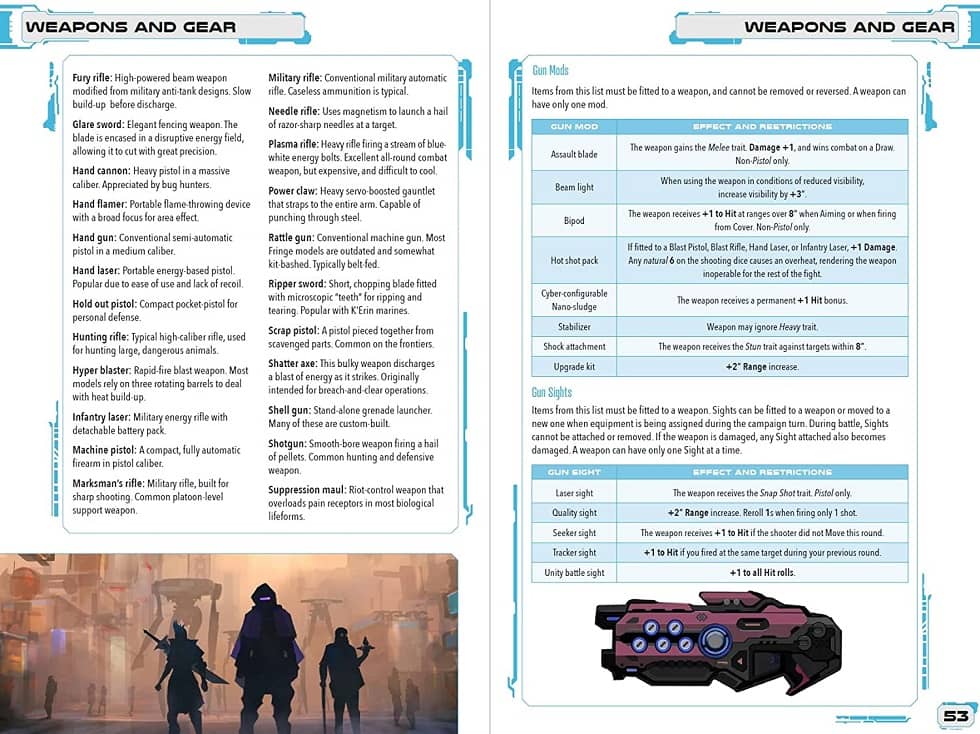 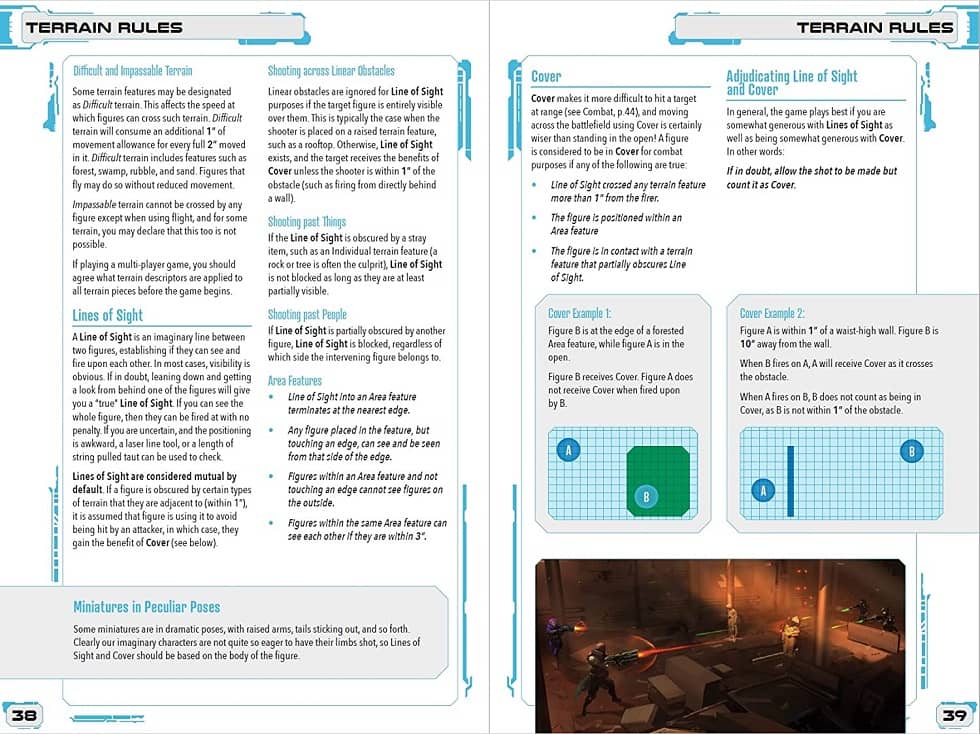 Thomas Brandstetter at the Wargaming Craft blog has a nice review of Five Parsecs from Home. Here’s an excerpt.

Around this time last year, I gave the old version, which was published by Nordic Weasel Games, a try. It was not exactly what I was looking for, so I modified it… However, this time I am more in the mood for a story that centers on the classical small group of misfits, canonized by books and TV shows like Firefly and The Expanse…

We started by creating a crew. This takes a little while, as it involves a lot of dice rolling, but it’s great fun to see the crew come to life with backgrounds and motivations. We ended with the crew of the star ship Black Cat, a worn colony ship, making their way through the galaxy.

As we are in debt, we wanted to take an opportunity mission, but old pirate rivals of us turned up to teach us a lesson. Fortunately, we managed to turn the tables around and taught them a lesson they won’t forget so fast, as they decided to leave us in peace for good. This was a pretty successful first game and it did provide us with some money to buy new equipment.

The campaign system really is the heart of the game. The rules for tabletop combat are quick and fun. They work very well and offer plenty of opportunities for tactics. But the driving force is the campaign system, which tasks you with managing the career of your little band. The game has been called an RPG lite, and Ivan himself states that the Traveller RPG was a huge influence, but if you expect something like Rangers of Shadowdeep, where you follow a storyline that has been established by the author, you will be disappointed. There are RPG elements, mainly in regard to managing the crew’s resources, but as a whole, it is more akin to a story generator….

Five Parsecs from Home is a great game if you are in the mood for some solo or cooperative sci-fi action.

Here’s a closer look at Christian Quinot’s gorgeous cover art for Five Leagues From the Borderlands. 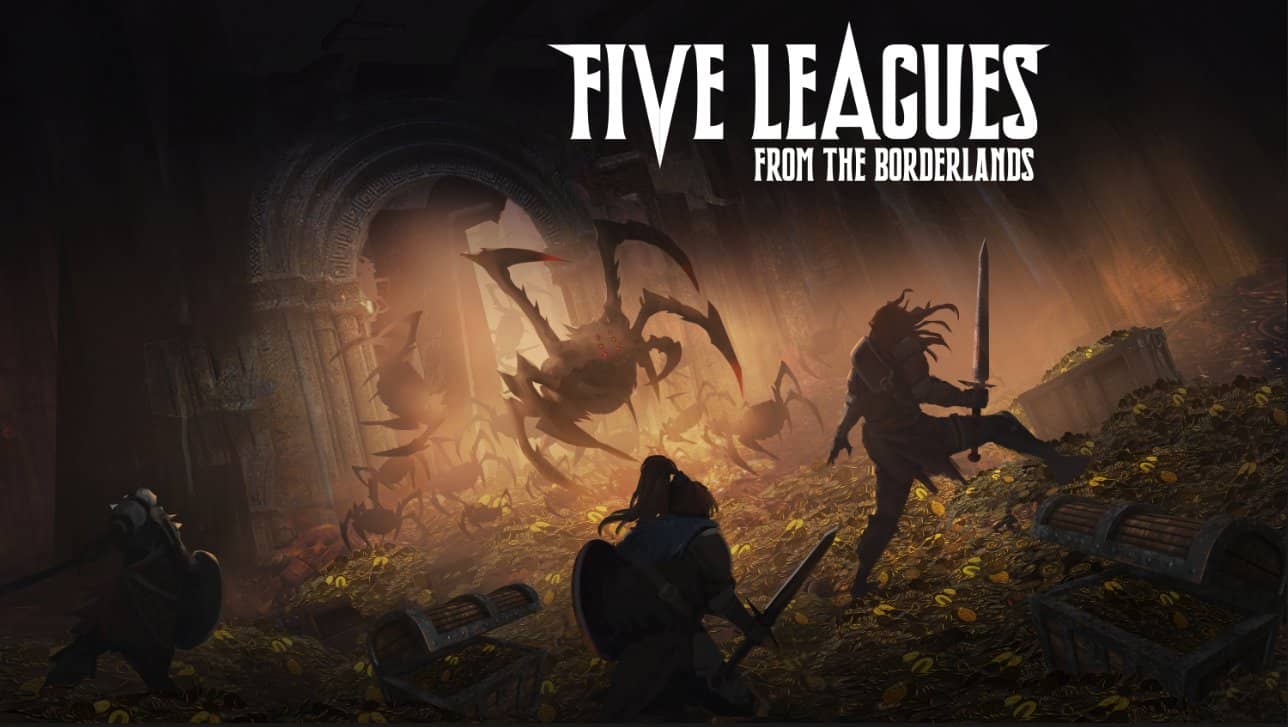 Cover art for Five Leagues From the Borderlands by Christian Quinot

Here’s the complete details for both books.

Five Parsecs from Home is already available online at Amazon, and in PDF format at DriveThruRPG.

Five Leagues From the Borderlands won’t be available until this summer, but here’s a few interior screenshots to whet your appetite (click for bigger versions). 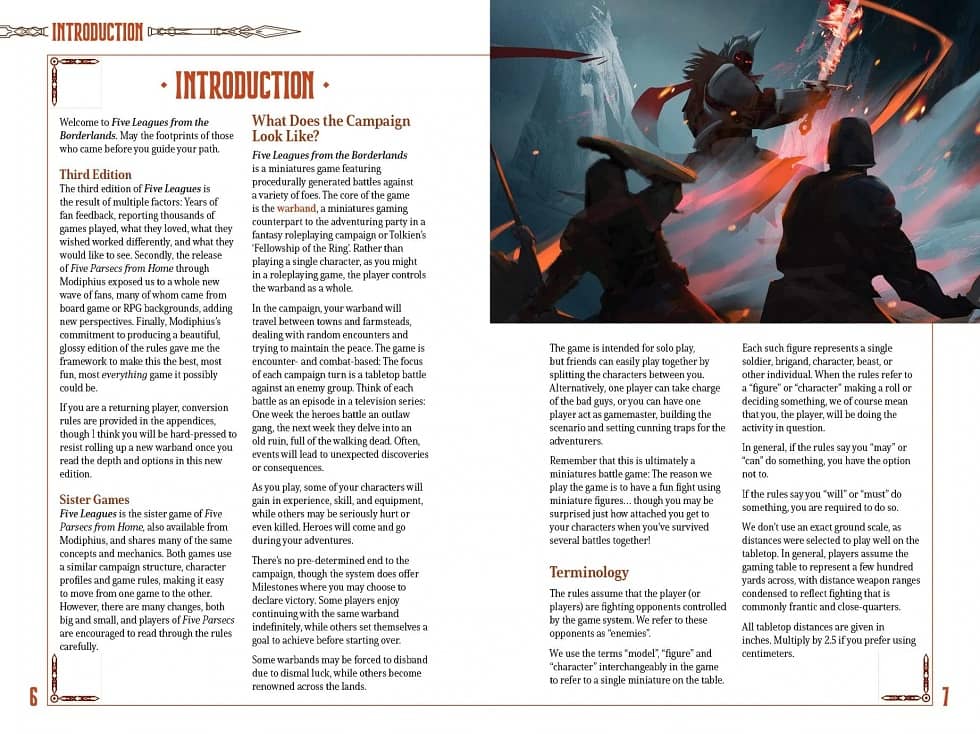 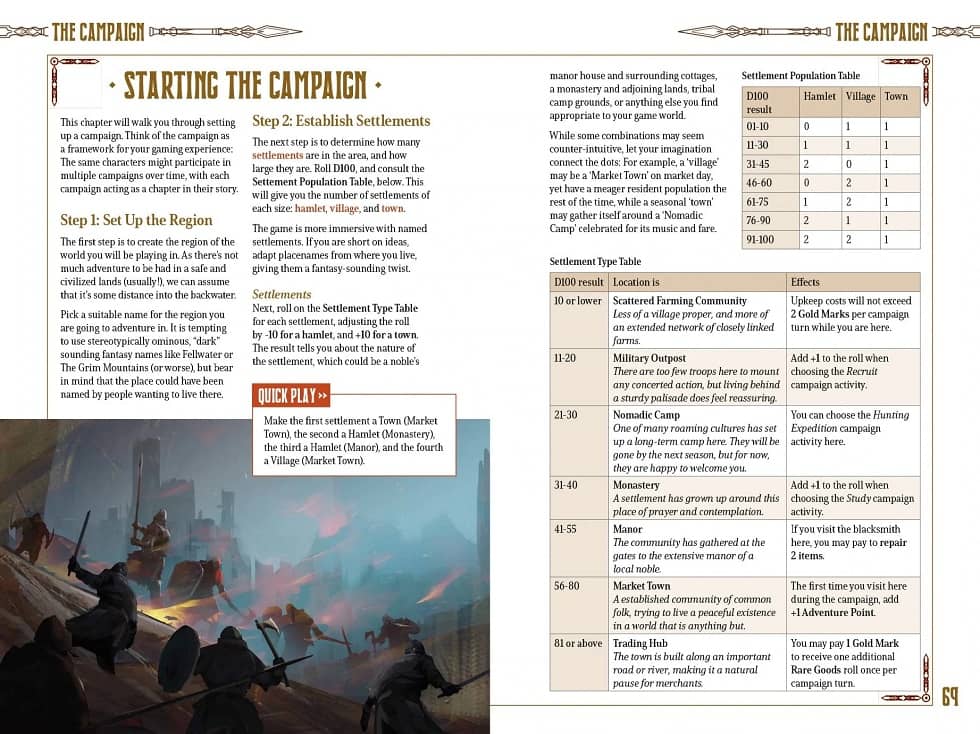 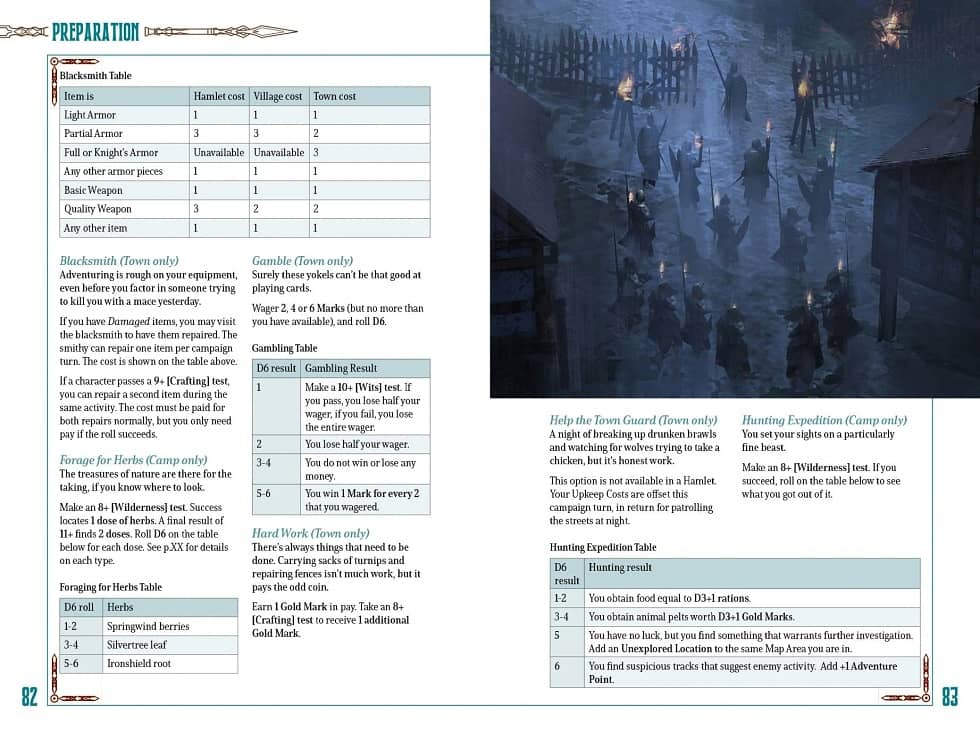 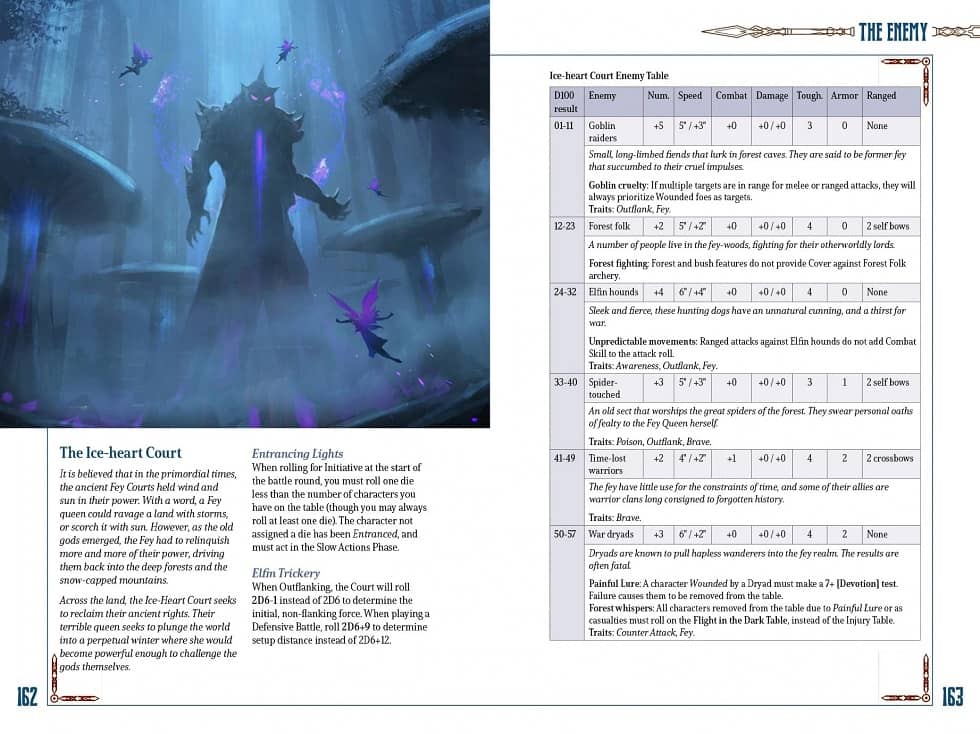 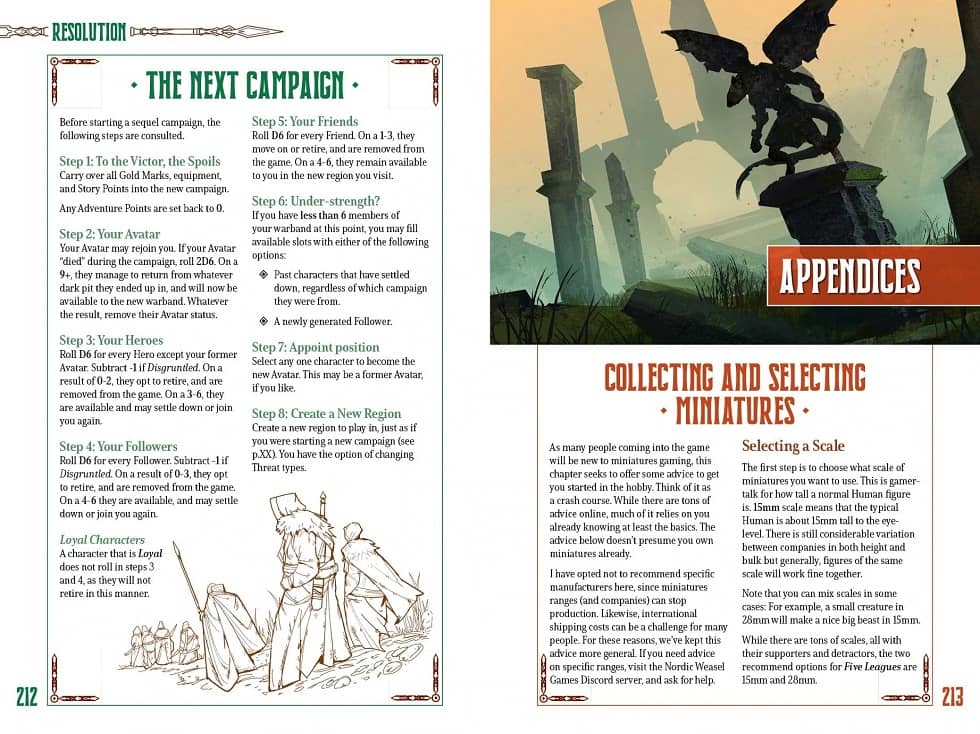 Our previous coverage of Modiphius Entertainment games includes some of their biggest recent titles, including Alien: The Roleplaying Game, Star Trek Adventures, Forbidden Lands, Coriolis The Third Horizon, and Conan: Adventures in an Age Undreamed Of.

Here’s a quick survey our some of our earlier reviews.

See all our gaming coverage here, and our features on solitaire gaming here.

Seems like an amazing system(s) to generate linked scenarios and campaign through to glory or retirement, as though the Traveller character life-path generation system got its own tactical rules. Neat-o! Guessing it is not the Modiphius 2d20, but something related(?). Fill us in on whatever kinds of fun you have playing them, Mr. O’Neill.

Eugene — I thought of those TRAVELLER tables too. Many years ago, after I bought the original TRAVELLER boxed set, my friends and I spent a late night rolling on the trading tables in the back, cross-crossing the stars in our little cargo ship, taking risks and staying one step ahead of bankruptcy as we smuggled contraband into the civilized quadrants. We made hard choices and had a ridiculous amount of fun using a threadbare economic system that really was an entire game all on its own.

This sounds like a much improved version of the same thing. If it manages to retain even a fraction of the same excitement — and sense of living on the edge in a dangerous galaxy — I’m sure it’ll be a winner.