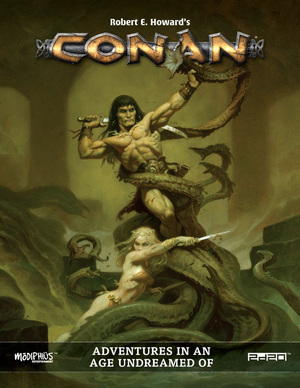 And so begins a Play by Post in the world of Conan!

Vultures spiral above the battlefield. Blood soaks into the rocky ground from hundreds of dying men and their horses, a grim reminder from the desperate hours prior.

For those who fought and died, the battle was as purposeless as any. Prince Satabus of Khoraja was tricked into bringing an army to aid King Ulam-Khala of Akbitana in a war against his cousin, King Nezurab of Shumir, another of Shem’s eastern city-states. So confident of the outcome was Satabus that… he brought with him his bride-to-be, a Stygian noblewoman named Neferet, along with her closest handmaiden.

With them also was a small delegation — envoys and court officials. They bore princely gifts to cement the deep and everlasting friendship with Khoraja and Akbitana: a chest containing fistfuls of gems; urns of precious oil; bolts of Turanian and Khitan silks and other fine cloth; ingots of precious metal; and measures of rare and fragrant wood… a sumptuous collection of finery befitting a royal visit.

The battle was over before it could even begin. In the days prior to Satabus’s arrival, Ulam-Khala and Nezurab had made peace with one another, messages traveling via messenger bird. The two Shemitish kings agreed to unite and destroy Satabus’s army as a show of solidarity, an act of betrayal that would serve to weaken Khorajan resolve against further incursions into Shem.

Seeing that the day was lost, Satabus sounded the order to flee, and as horns echoed across the desert, his mercenary army scattered across the dry plains and into the nearby foothills and hard-baked gullies. They were pursued by the asshuri, picked off one-by-one. Satabus and his cadre of knights fought valiantly to protect his beloved Neferet, but the caravan with her litter was cut off in the retreat. Their fates are unknown.

Each of you was part of Satabus’s army. You’re here now. Somehow, the last wave of Asshuri and footmen missed you. Everyone else is dead.

WHAT ROLE DID YOU PLAY IN THE BATTLE, AND WHAT ARE YOU DOING NOW? 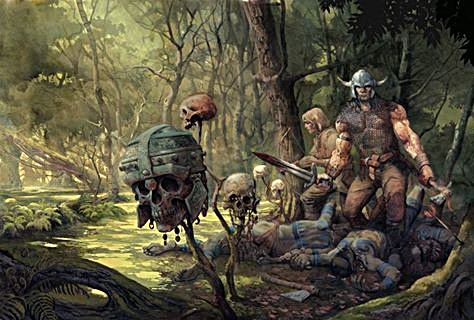 Gabe Dybing and I both backed the Kickstarter for Modiphius Entertainment’s Robert E. Howard’s Conan: Adventures in an Age Undreamed of. It’s a new role-playing game using the 2d20 system, which is a wee bit different from the standard d20 approach. And of course, it revolves around the famed Cimmerian (notice I did not use ‘barbarian.’) The game is based heavily on Howard’s original source material, while incorporating some of the many pastiches readers are familiar with.

With some help from fellow Black Gater Martin Page and his son Xander, we are trying out the system. Gabe is the GM and Martin, Xander and I have rolled up characters and started out. We are playing Vultures of Shem, the introductory adventure included in the Core Rulebook. If we are all still on speaking terms after getting through that(!), Gabe will likely generate an adventure from the tables/materials included in the GM Screen or from one of the supplement books.

We’re all learning the system on the fly, as it’s the first play for any of us. You’ll see various posts here at Black Gate as we go along. This first post will cover some of the overall basics before we dig into the actual system.

The game is from Modiphius, makers of other RPGs including Achtung Cthulhu, Mutant Chronicles and Kung Fu Panda. The Kickstarter was immensely successful, raising over 436,000 pounds on a 45,000 pound goal.

I was a PDF backer and I’ve had no complaints with timeliness as they worked on Wave 1 and Wave 2 (there will be a LOT of products coming out). I’ve picked up a couple of the hardbacks at my FLGS, so product is getting out there.

Everything you need to play the game is in the Core Rulebook. It’s 441 pages of rules and more and includes a limited bestiary, a gazetteer and an adventure. Of course, there’s much, much more to both an RPG system and Robert E. Howard’s marvelous world, so there will be many more supplements to add to the experience. 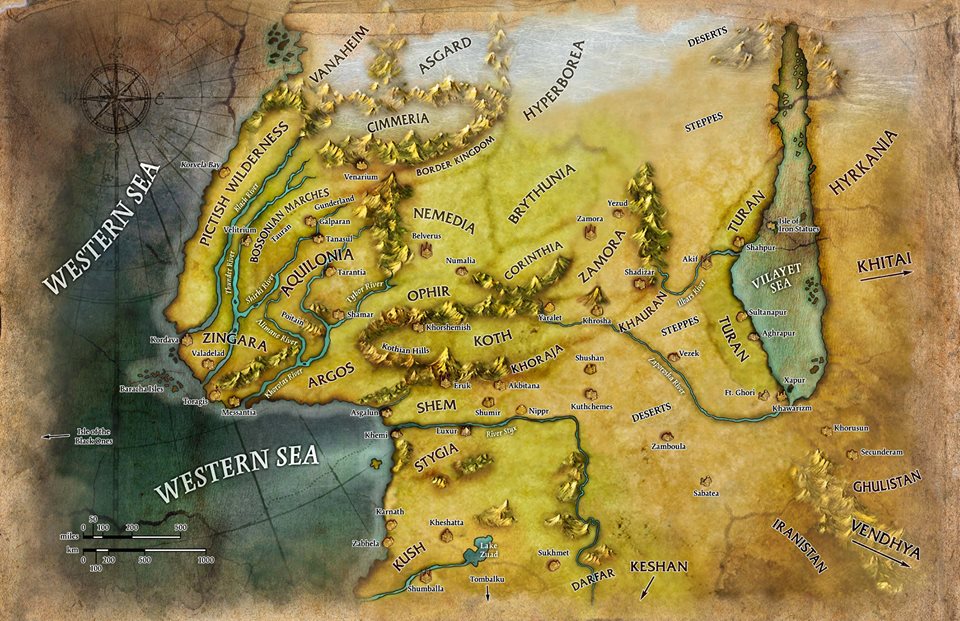 I always buy the main rulebook when I decide to explore a system, but for some folks, just the info a player needs is enough. So, there’s a Player’s Handbook that costs less than half of the Core Rulebook. I was disappointed because it has NOTHING that’s not in the Core Rulebook. It didn’t add anything at all. It’s just the first 140 pages or so of the Core Rulebook, which is about character generation and the basics of playing. And why do I keep typing ‘Core Rulebook‘?

You’d think they could have added something to the product. There’s not even one new archetype or skill or weapon. No bonus gazetteer info. Nada. It’s been my biggest disappointment so far. If I did miss something, it sure seemed negligible.

GABE. In my view, Bob is enforcing a “false equivalency” between the Conan books and what I largely am thinking of as the Pathfinder core line, which I know Bob loves and follows. I believe the comparison is erroneous because, in my understanding, Modiphius’s aim is to create an “authentic” Conan roleplaying game, not provide endless tools and options for players and gamemasters.

Therefore, Modiphius has willingly limited the scope of its companion volumes. Moreover, this approach appears to have created some confusion with some of its consumers, who, via social media, claim alternately that the products contain too much pastiche or too little. I suppose it’s difficult to provide a “perfect” product for such a passionate and discerning fan base.

I still think they could have added something to the Player’s Handbook to make it more than just a cut and paste from the Core Rulebook.  And I ‘love’ Pathfinder a little less after the recent announcement of a 2nd Edition… 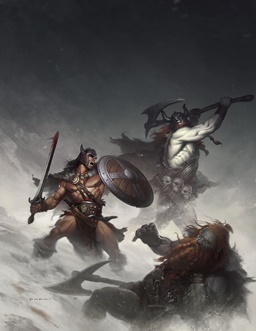 There are game tiles, dice, benefits to Age of Conan MMO players (of which I am one) and the board game; that kind of stuff. But I don’t have most of them and we’re not using them for our game, so I’ll let you dig into those.

GABE – Not precisely true. I backed Monolith’s Conan board game at the King level (and have since so much loved the product that I have acquired all the expansions). The ConanRPG and board game are immensely synergistic: both games use a unique spacing system (rather than the five- or ten-feet squares of d20 games) that, in my view, translates beautifully to both theatre-of-the-mind and miniature gameplay. I intend to use some of Monolith’s cardboard counters to represent PCs and NPCs, taking pictures of them on either hand drawn maps or on official game boards from Monolith to give the players concrete ideas of what is happening in the tactical arena.

Of course, books are the key supplements. There has been one adventure book, Jeweled Thrones of the Earth. The early releases are geared towards phases of Conan’s career.

One of the joys of Howard’s stories is that Conan had a lot of different careers during his adventuring days. He was a pirate, a nomad, a thief, a northern barbarian (well, he was always that) and more. What I am calling the ‘Character Supplements’ generally focus on the various aspects of his adventuring days.

I’ve read Conan the Barbarian, Conan the Thief and Conan the Mercenary, and I’ve got Conan the Pirate ready to go. I’ll talk about the Character Supplements in an upcoming post, but each is about 130 pages (which I find a bit thin for the $24.99 price) and includes character options, a gazetteer with three or four nations that are associated with that part of Conan’s life, and some other player-related info.

In addition, there are some encounters (the term used for NPCs and monsters), thematic suggestions for the GM and more. The books are lavishly illustrated and nice to look at, though the maps are so hard to read I am using a magnifying glass. Really. I’ve been told by Modiphius folks that they are working on improving that problem in future books. I like the books.

GABE – Just an observation: in my experience more and more people are investing in RPG supplements in PDF format, both for ease of use, navigation and to save physical shelf space in personal libraries. The “small” maps, for most people, shouldn’t be a problem. In fact, on PDF, they can be enlarged, shrunk, altered… For online gaming I have enlarged a region in which the PCs are adventuring, taken a screenshot of it, and posted it in high-def social media. Bob is such a fogey! 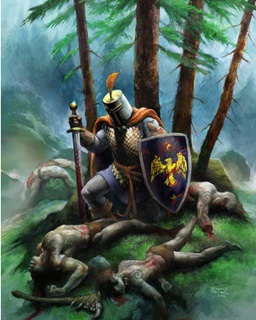 I almost didn’t back this Kickstarter because it wasn’t d20. But as it kept breaking through stretch goals, I couldn’t pass up on so much Conan product. I’ve gone through the Core Rulebook, the Player’s Guide and the QuickStart Guide multiple times.

I’m struggling a bit. The premise is that it’s more like the old pulp styled adventures in Weird Tales than just a normal role-playing game experience.

Armor Class is replaced with Soak; there are two types of hit points (essentially mental and physical), no character levels, resources for players (Momentum) and GMs (Doom) that you ‘bank’ and can use during key moments of the game to turn the tide; and even when you roll a hit, there’s a 32% chance you do no damage.

But just because I’ve always played d20 doesn’t mean an alternate system isn’t fun. I’m trying to learn. I recently read some of the Star Wars RPG rules from Fantasy Flight and I’m seeing some similarities to that one.

And…I think that’s about it for the moment. Jason Durall, co-line developer for system (with Chris Lites), is going to do a Q&A here at Black Gate, so we’ll get some insights from him.

Martin, Gabe and I (with some help from Xander) will post as we go along. I’m already working on the basics of one about the character creation experience, which I found to be pretty rich.

But we hope you will check in here at Black Gate for more Modular posts on our explorations in The Hyborian Age!

Here’s a link to a video that Waldgeist put together, explaining the Conan 2d20 system, using the Age of Conan MMO tutorial. You can get a sense of the mechanics from it.

Gabe Dybing blogs about Norse-themed roleplaying and other gaming pursuits at Tower of the Valkyrie. He used to publish, with fellow commentator Nick Ozment, Mooreeffoc Magazine.

Martin Page is a regular contributor to Black Gate and writes novels, such as the alternate history mash-up Swords versus Tanks and non-fiction books like Storyteller Tools, under the pen name, M. Harold Page. He lives in Edinburgh, Scotland and teaches Medieval German longsword at Edinburgh’s Dawn Duellists Society.

Having enjoyed the separate posts this august group has made on roleplaying and RPGs, I look forward to seeing how you all play together. I suspect that it will be quite the adventure, by Crom!

Why, thank you! That’s very kind of you to say

Interesting … I don’t have the Conan RPG yet, but I dropped an embarrassing amount of money on the John Carter RPG, so I think I’ll be getting a bunch of Conan PDFs at some point or other.