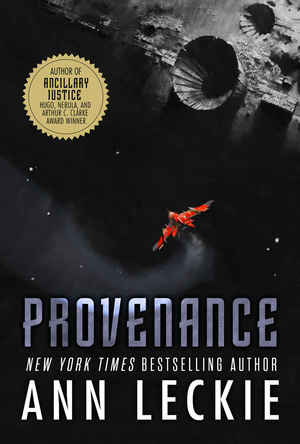 Ingray Aughskold hasn’t just risked her life’s savings for this moment. If she fails, she’ll have to work for years to make up the debt. Her reputation will be ruined, and she’ll lose her job. Worse, her adoptive mother will never choose her to inherit over her vile foster-brother Danach. But just when the deal’s supposed to come together, everything’s falling apart.

The blur cites “unexpected difficulties” in fulfilling the contract. “The package will not be delivered unless the payment is increased.”

But Ingray doesn’t have any more money. If this deal goes through, she won’t even be able to afford her next meal. She’ll have to wait to eat until she’s on board the ship home to Hwae. She really should’ve forced herself to eat breakfast that morning, no matter how nervous she may have been. “Then do not deliver it,” she says.

She’d probably be better off if the anonymous procurer didn’t cave. All she’d suffer would be a dent to her savings for the Facilitator’s fee and her travel expenses. She could go home and hatch some new scheme to outdo Danach. But she doesn’t get that lucky.

“Very well, then,” the blur says. “The deal goes forward.”

“Very well,” she answers. At which point, she takes custody of a large shipping crate. Which wasn’t what she was expecting at all.

Arriving at the small cargo ship she’s booked passage on, she runs into a new problem in the form of Captain Tic Uisine. Taking one look at the size and shape of her shipping container, he suspects human trafficking and insists on opening it.

Ingray tries to reason with him, explaining that, while the container does indeed hold a person, it’s not what he thinks. She paid to have a famous Hwaean politician’s disowned son, Pahlad Budrakim, broken out of an open-air prison named, ominously enough, Compassionate Removal, where inmates run free in pure dystopian anarchy. She hopes this will impress her mother, a rival politician, who can use Pahlad against his father.

But Captain Uisine insists on allowing em (the relevant pronoun for a neman) to speak for eirself, so Ingray looks on helplessly as the suspension pod opens to reveal the naked occupant. Who promptly denies that e’s Pahlad Budrakim, despite Ingray asking em many times. Worse, this person-who-is-not-Pahlad-Budrakim refuses to accompany her to Hwae. E intends to indenture eirself on Tyr Siilas instead. Indenture might be miserable, but anything’s better than Compassionate Removal.

Ingray has indebted herself to the procurers for nothing. She’ll return home empty handed, an abject failure.

But that won’t be soon, since her ship’s departure is delayed by two days when an alien diplomatic mission arrives, unexpectedly disrupting traffic around the station. That’s when an Enforcement official and two patrollers arrive at the bay and impound the Captain Uisine’s ship. The aliens want to arrest him, claiming he stole the craft from them. But that can’t be true, can it? The captain’s paperwork is all in order. It’s all meticulously in order, much more meticulously than most captains’ paperwork.

Captain Uisine clearly isn’t the paragon of integrity that he seemed at first. The person-who-is-not-Pahlad-Budrakim also makes an abrupt about-face. Confronting security forces who might identify em as an escaped convict at any moment, e suddenly realizes the wisdom of getting far away from Tyr Siilas. We don’t know who e is. We don’t know what e’s done. E really doesn’t seem to be Pahlad Budrakim. But e’ll take the fake identity Ingray had prepared for em and travel to Hwae, after all. Where the new plot she’s just hatched to have him impersonate Pahlad Budrakim might work.

In her Black Gate review C.S.E. Cooney has compared Ann Leckie’s work to that of Lois McMaster Bujold. I second that. Leckie’s books might be a hair more literary in style than Bujold’s, but the space operatics of both feature endearing characters who stumble into interstellar politics and get themselves into hopeless tangles with surprisingly humorous results.

Leckie explores new ground in the ingenious use of pronouns in this book. Her Imperial Radch series was famous for featuring a protagonist who used to be a starship, had trouble picking up gender cues, and therefore used “she” to describe everyone. This resulted in a delicious sense of disorientation for the reader, who could (1) guess at the gender of the characters for themselves, (2) gender everyone as a woman, or else (3) just abandon gendering entirely. In Provenance, Ingray’s society allows individuals to choose their own gender from three options (woman, man, and neman) upon their majority. This contributes to a similar sense of gleeful fluidity as the reader loses track of which pronouns might be appropriate for which characters. Since one of the characters only chose her gender late and reluctantly, one also gets the sense that, at least for some, the decision is somewhat arbitrary and provisional. Readers with a knowledge of LGBTQ+ history will appreciate this nod to the “kiki” individual of mid-twentieth-century lesbian-identified communities, who vacillated between the “butch” and “femme” poles without ever committing to either.

Leckie’s first novel, Ancillary Justice, won the Hugo, Nebula, and Arthur C. Clarke awards. According to her official author bio, Leckie is the first author ever to earn all three simultaneously. A worthy successor to this tradition, Provenance was published on Sept. 26, 2017, by Orbit. I myself had the good fortune of hearing her read from the book at A Room of One’s Own Bookstore in Madison, WI. An excerpt is available at the Orbit website. Provenance was published in hardcover by Orbit; it is 448 pages, priced at $26.

Yes, this was a great book, and a worthy successor to the Ancillary books.

Small correction: it’s not that the protagonist of the “Ancillary” series had trouble picking up gender, it’s that the Radch culture and language had no concept of gender (presumably because people could alter their bodies on a whim.)

I liked Ancillary Justice well enough, but I couldn’t stand the second book. It was really, really small in scale, which can be totally fine if the characters and situations are interesting, but to me, they just weren’t. I know, this is a common complaint, but: it just felt like tea drinking, all the way down. The politics and intrigue seemed very pedestrian. Didn’t bother with the third novel.
Leckie showed a ton of promise, but I just don’t think I can read another of her books again after that second one. It all just feels so…quiet and small, I guess. First had a ton of cool stuff in it, though.