I just finished complaining about the lack of modern horror and fantasy anthologies, and along comes Nightscript strictly to prove me wrong.

I don’t know much about Nightscript. But I know I love the creep-tastic cover of Volume 7, by Berlin artist Jana Heidersdorf. I first glimpsed it when a fellow dark fantasy enthusiast posted it on Facebook, and was intrigued enough to track down the publisher (C.M. Muller’s Chthonic Matter) and order a copy.

Nightscript is edited by Muller, and published in hardcover, trade paperback, and digital formats. Here’s the complete table of contents for Volume 7.

I couldn’t find much in the way of online reviews, but I did find a brief summary by Bill Hsu at Goodreads. Here’s an excerpt.

My favorite [story] is easily Elin Olausson’s “Roadkill.” The young girl narrator’s voice has a caustic attitude… and enough is left unsaid so we can fill in the horrific details. I would quote the lovely ending, but you should really experience it yourself….

I loved the quiet, mysterious setup of Regina Mitchell’s “A Perfect Doll”… The narrator’s voice in [Marc Joan’s] “Madam and Yves” reminds me of older decadent weird fiction, but the story centers around 3D printing. Intriguing combo… Charles Wilkinson’s “Where the Oxen Turned the Plow” is gentle Brit folk horror…

Nightscript Volume 8 has already been announced (on the Nightscipt Facebook page); it will be published on October 1st. Here’s a peek at the cover. 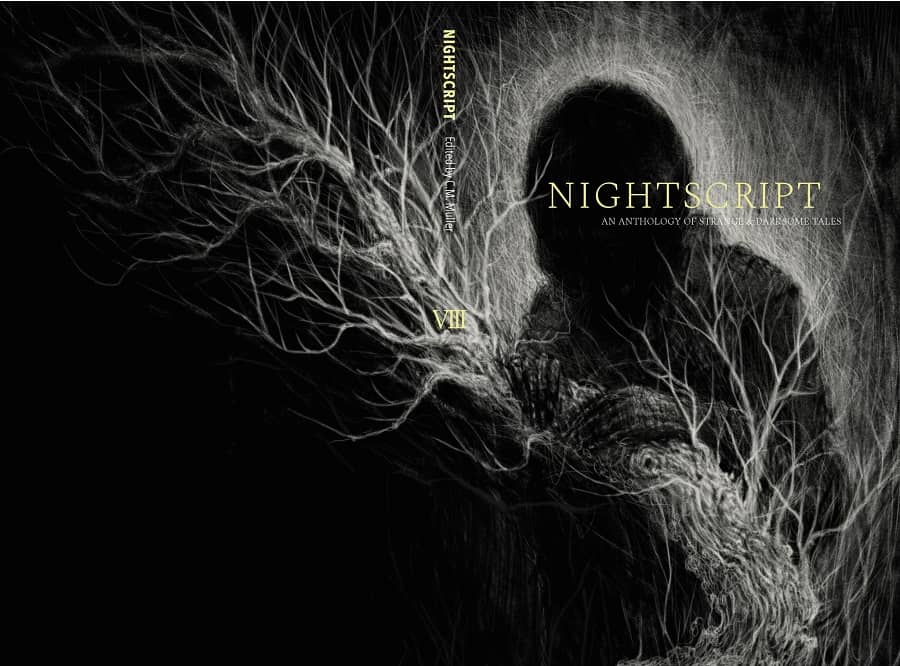 Nightscript 8, coming in October. No idea who did the cover.

Nightscript Volume 7 was published by Cthonic Matter on October 1, 2021. It is 248 pages, priced at $27.99 in hardcover, $17.99 in trade paperback, and $7.99 in digital formats. The cover is by Jana Heidersdorf. See at the details at the Cthonic Matter website, and check out their Special Bundle Offer on all seven volumes.

I read (and reviewed) some of the previous installments. Then I lost trace. Good to know it’s still around. It seems to me that the publisher is not doing much to publicize and advertise this anthology series.

Real publicity costs money and takes a lot of effort — I know, I tried it with Black Gate magazine and discovered just how hard it was to really do a good job (we didn’t).

It seems to have some effective word-of-mouth. That’s how I discovered it, anyway.

And even the best funded and executed publicity can end up shouting into a vacuum. These days the single strongest mover of book sales is Tik Tok. It has transformed the publishing world overnight. Talk to anyone in any aspect of the business. I have personally seen it have a huge effect on horror sales.

Byron — I expect you’re absolutely right. I’ve never used Tik Tok, but even someone as far removed as I have heard about the impact.

How does it drive sales? Are there Tik Tok book reviewers? Special contests/challenges? Other avenues of promotion incomprehensible to luddites on the outside?

All 7 volumes are available for free on Kindle Unlimited.

Oh, hey, thanks for posting about this! I’m excited to be part of Volume 8, and hoping that this good word of mouth keeps on going.

Congratulations Harrison! Tell us about your story.

“Sophie Anne” is a story about a mother, her little girl, and a doll that won’t stay where it’s supposed to. (Short stories being what they are, I’ll leave it at that.)

Brrrr! Sounds plenty creepy even with that short description. Looking forward to it!