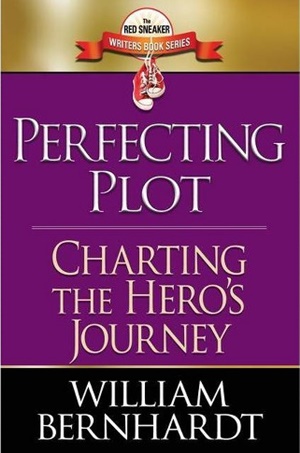 I started reading William Bernhardt’s Ben Kincaid books back in the mid-nineties. I seem to recall I went on a ‘lawyer’ kick and read him, Steve Martini, and Robert K. Tannenbaum. But years later, Bernhardt made a bigger impact on me with his Red Sneaker Writers series. These slim volumes with the brightly attractive covers, are jam-packed with great writing advice. The first book I read was on Story Structure, and I think it’s still my favorite. Though every one has been both interesting to read and thought-provoking. If I ever get my act together, I’ll add “taught me a lot.”

I’ve read through a couple of them more than once, making notes ( I CANNOT highlight a physical book. I’m incapable of it). Last year, I decided to be a little more systematic and I went through EVERY title, be it Theme, Dialogue, Character – all of them: and I outlined the key points in each chapter. I printed them all out and have a very cool binder. Which, if I ever actually sit down and write a novel, will be of great use.

I’ve read a lot of books on writing – fiction and screenplays. And I’ve come across a lot of useful ideas, suggestions, thoughts, and advice, from folks such as Lawrence Block, Tony Hillerman, William Martell, Syd Field, Robert Randisi, Chris Vogler (though I’m more apt to go to the original source material from Joseph Campbell), and James Scott Bell – to name a few without actually looking at my bookshelves. There are quite a few more, but my education would be incomplete without the Red Sneaker Writers books from Bernhardt. He writes in a clear, amusing, understandable, useful, manner. I can’t imagine not picking up at least something from each book. And I think you’re going to learn more than that.

Each chapter ends with a couple Highlights, which I think of as Key Points. An also a couple of exercises to help you move forward. For each book, I took all the Key Points and turned them into an outline. And I spaced them out, so that I can write notes and comments in them. I’m pretty pleased with myself. So what follows is my outline for Perfecting Plot: Charting the Hero’s Journey.

Go ahead and read on through this outline. And check out all the books at his webpage. Plus his other works, of course! You can subscribe to his free Red Sneaker Writers newsletter. I have all of the books in paperback, and they’re worth $7.99 each. The ebooks are mostly $3.99 and I HIGHLY suggest finding one or two that you want to check out and giving them a try. For me, Story Structure (99 cents!!!!), and Character, are the two more ‘foundational’ books, with the others allowing you to build more blocks on the foundation. But you can start anywhere.

1 – Regardless of what kind of story you’re writing, memorable characters and memorable plot are essential.

2 – All stories are character-driven.

3 – Character and plot are two closely interrelated ways of viewing the same thing: your story.

2 – Special abilities or qualities can make protagonists more interesting – and more capable of dealing with the obstacles in your plot.

3 – Never be afraid to take your characters out of their comfort zone.

4 – To prevent series characters from becoming stale, allow them to evolve or develop new abilities and talents they either didn’t have or the reader didn’t know about in previous entries.

5 – The main character is always the protagonist, even if this is a series character who has appeared in many previous books. Don’t allow them to become a guest star in their own book.

1 – Plot is composed of a series of escalating conflicts.

3 – The protagonist should fail many times before succeeding.

4 – Subplots must relate to, and enhance, the primary conflict.

5 – A good conflict will directly involve a sympathetic protagonist, be meaningful, increase in intensity as the book progresses, and lead to an emotionally satisfying resolution.

IV – THE FACE OF CONFLICT

1 – The protagonist’s story is only as good as the antagonist makes it.

2 – Weak opposition will lead to a weak story. 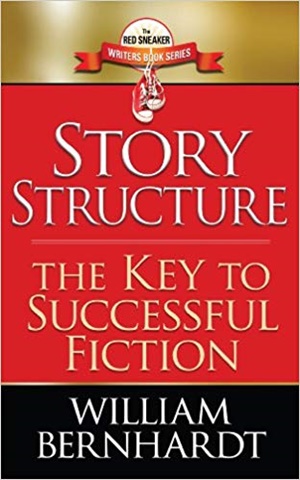 V – THE THRILL OF SURPRISE

2 – A good surprise will energize the story.

3 – A great surprise lends insight to the story.

4 – The best surprises illuminate the story and cause the reader to see everything in a different way than they did before.

5 – A good surprise should be surprising, organic to the main plot, well planted, fairly foreshadowed, and illuminating.

6 – If surprises occur too frequently, they lose impact.

7 -Some surprises are so outrageous and unlikely that the credibility problem outweighs whatever pleasure might’ve been obtained from the surprise.

VI – THE AGONY OF COINCIDENCE

2 – Avoid deus ex machina endings in which the plot is resolved by something that has not been foreshadowed and seems all too convenient.

1 – Conflict can be inner, personal, or eternal.

3 – Personal conflicts involve relationships with others.

4 – External conflicts put your protagonist in opposition to a powerful force in the outside world.

5 – The best stories will have all three levels of conflict, and at some level, all three will relate to one another.

1 – There are only five plots.

2 – In the Education Plot, the protagonist learns something, or grows as a person, or comes to see life in a healthier, more positive way.

3 – In the Disillusionment Plot, the protagonist experiences a profound change in worldview, but from a positive one to a negative one.

4 – In the Testing Plot, the antagonist is challenged by incredible, overwhelming opposition, but despite all odds refuses to give up.

5 – In the Redemption Plot, the protagonists redeem themselves for sins, errors, or crimes of the past.

6 – In the Corruption Plot, an initially good person is negatively altered by something that occurs during the story.

7 – The purpose of understanding which plot you’re writing is not to make your work formulaic or cliché, but rather to enhance it. If you know what story you’re telling, you’re likely to do a better job of telling it.

I really like this series of ten books. And I think there are things to learn from each of them. Certainly the two I’ve highlighted so far. Check them out!

man oh man, i have bought a few books like these, but being honest with myself i will most likely never write anything. i never took to mind actual grammar rules, i dont know if you need them exactly, but they sure couldn’t hurt. the only one i have read some of is the scriptwriting one by Straczynski 9michael). i think i like the idea a lot, and daydream, but in the end i think if it took it serious i would have done something by now.

these seem like they would be really good though, broken down into more sizable chucks of good info instead of the catch-all books

Silent – I’ve got some solid books on screenwriting, which have good advice for ‘regular’ writing as well. William Martell is a guy who imparts some real wisdom about telling a story. Which is what all fiction is really about, regardless of the format.

These Red Sneaker Writers books check all the right boxes for me. They’re not stuffy academic tomes or long reads; they recognize patterns and formulas, but don’t slavishly adhere to them; they’re amusing, and they make pop culture references; the author doesn’t just talk about his own fiction (Which is best-selling); they make sense; they’re easy to read; you can do some, none, or all of the exercises at the end of each chapter; the Key Points summaries (which make up this post) are handy. And these books helped me become a more critical reader, and better understand why I liked some things more than others.

Really – just great little books. I’ve got ‘What Writers Need to Know – Essential Topics’ sitting nearby for reading at lunch. That’s the most recent one, and I outlined it but haven’t delved into it. It’s kind of a Greatest Hits of the series.

Lawrence Block’s ‘Telling Lies for Fun and Profit’ is still my single favorite writing advice book, but every one of these books has been worth reading. And if you go the ebook route, it costs less than a week of Starbucks. Go ahead and check out the Story Structure book. It hooked me.

you know whats funny, i always though if i was to write a mystery/crime novel it would end up boring, because i could only think in terms of how a regular cop/PI would do it, beating the street and all the “boring” work of it. then i read through about 15 Mathew Scudder books by Mr. Lawrence Block and he wrote in almost the same way, ad it was fantastic and not boring. right there alone made me think some day i might be able to do it too. no where as good as Block, but it could be done. i havent read his advice book, but if you say it’s that good, how can i pass up one of my personal writing hero’s how to book.

Block wrote several writing advice books, based on his many years of doing a regular column for Writer’s Digest. ‘Telling Lies…’ is the first, and I think, best of the bunch.

And police procedurals can be anything but boring. Ed McBain’s 87th Precinct series is the standard. Tony Hillerman’s Navajo Tribal Police books (I’m a HUUUUUGE fan) are mostly procedurals. Joe Gores’ DKA books are in large part auto repossession procedurals, and they’re excellent. I think it’s the picture you paint of the characters, and the settings. They carry the plot/story.