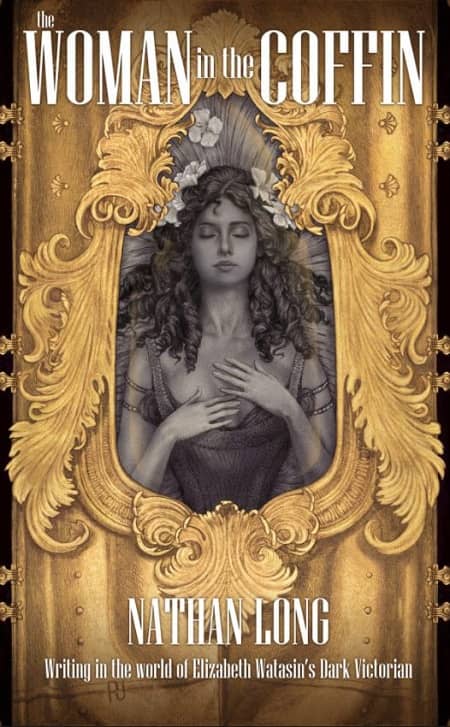 The Woman in the Coffin by Nathan Long (Oolong Books, February 18 2021)

So, I accidentally wrote a novella.

When I told him about it, John O’Neill congratulated me on my sagacity for following the current trend in novellas, but that was never my intention. I’m so out of the loop I didn’t even know there was such a trend. What I had set out to do was to entertain my friend Elizabeth Watasin by writing a serial adventure set in her Dark Victorian world and sending her a chapter every week. It just so happened when I put all the chapters together they turned out to be novella length and not too terrible, so there you go. And, yes, as you have already deduced, not only is it a novella, it’s a fan-fic novella. I so fell in love with the swooniness of Elizabeth’s world and characters that I was inspired to write a Watasin-adjacent story of my own. And, to add to its other sins, it’s very possible I won’t write a follow up.

Given all that (fan-fic, runtish length, no ‘long tail’) what the hell am I doing making The Woman in the Coffin the first thing I self-publish? Honestly, I don’t know. I have two finished full length novels in the trunk that would only require a copy-edit and a cover to put up on Amazon, but did I publish those? No. I picked the thing that requires half a page of mea culpa to explain, and which I had to ask Elizabeth’s permission to publish.

On top of that, I really shouldn’t be self-publishing at all. I am entirely unsuited for the work. Self publishing requires self-promotion, and cross-posting, and follow-through, and watching You-Tube videos hosted by entirely too cheerful ‘kindle-preneurs’ who are eager to impart to me the ‘Ten Things You Absolutely Must Do To Make Your Book A Bestseller!’ I don’t want to do any of those things. They’re exhausting and embarrassing, and I am always more interested in working on the next book than selling the last book.

But here’s the thing. When you write a story you like, you want to share it, and when you write something that’s never going to fit anywhere else, what option in this modern age makes more sense than making a Bezos book? I can’t go to a publisher with a story written in someone else’s world. For the same reason, I can’t put it in an anthology or magazine. Short of printing out myself and handing it out to people on the street, it’s Amazon or nothing, so that’s where you’ll find it.

But why did I want to write a book such as The Woman in the Coffin in the first place? Well, like I said, I was inspired by my friend Elizabeth’s novels, which means the real question is, why did her books inspire me?

First of all, because they’re delicious. Second, I guess it’s that the two of us share a love of penny dreadfuls, gothic romance, and Victorian pulp, and her versions of those things tickled that itch in me and made me happy.

I have always loved the more low class and popular end of Victorian fiction — the H. Rider Haggards, the Conan-Doyles, the Stanley Weymans, and Wilkie Collins, and also, of course, the early writers of horror and the macabre such as Poe, Stoker, and Robert Louis Stevenson. I love the unabashed melodrama of the stories, their utterly unsubtle heroes and villains, their wild invention, and the tick-tock perfection of their plots, where no thread is left untied, and all deserts are just. I also love the structure of early serial fiction, with its breathless pace and cliff hanging chapter ends, and have always wanted to try my hand at writing a story in that manner — using the prose and form of the day to tell a tale with a more modern sensibility, and playing in Elizabeth’s Dark Victorian world gave me the perfect excuse to do so.

My other direct inspiration was the German expressionist films of the late teens and early twenties. I haven’t seen a lot of them, but those I have – Doctor Mabuse, The Cabinet of Doctor Caligari, Nosferatu, The Golem – I have loved, and for many of the same reasons. They have the same manic melodrama, the same exploration of dark themes, the same fascination with the mysteries of the mind and soul, as their Victorian forebearers, but told with stark and haunting images instead of grandiloquent words. It was, in fact, the day after my wife and I watched The Cabinet of Doctor Caligari that I came up with the idea that became The Woman in the Coffin.

Hmmm. Reading this back it’s embarrassing how obvious it is that this article is just a thinly disguised attempt at promoting my book, but I do hope it’s at least a little more than that. I hope it will inspire you to look at Elizabeth Watasin’s work as well, and also seek out the writers and films that inspired both us.

And if you’d like more modern fare with the same flair, please check your tv listings for the Penny Dreadful and Babylon Berlin series, or hunt down Tim Powers’ novels The Stress of Her Regard and The Anubis Gates, or Mark Frost’s The List of Seven, or Sarah Waters’ Tipping the Velvet, Affinity, and Fingersmith. They are all proof that the twisted seeds planted by the Victorian popular writers have flourished into a lush and lurid garden of dark delights, and if my little sapling of a book leads you into its maze, I will be a happy man.

You just had to mention silent German expressionist films, didn’t you? That, and the silent era in general, is a big draw for me.

And as a self publisher myself, yeah, I get you about the self promotion. It can be a drag. Not all of us are super hyping types, with some folks who are actually even looking down upon those who aren’t. But it’s a big world and we’re all different. I used to self promote quite a big a decade or so back, then got burned out on it and have pretty much just quit other than the occasional tweet or Facebook post. And don’t worry, because this article didn’t come of as all self hyping but actually was fun and interesting.

Though I am interested in your cover art. Love it. Do that yourself? Or did you hire/ask an artist?

Hi, Ty. Argh! I should have mentioned that in the article. I commissioned the cover from the incredibly talented Rebecca Yanovskaya, whose work can be seen here at her website. http://www.rebeccayanovskaya.com
I was utterly blown away when she delivered it. So amazing!