Before his untimely death in 2016, Bud Webster was Black Gate‘s poetry editor and one of our finest columnists. He wrote a number of Who? columns on forgotten SF writers for our print issues, and thoughtful pieces on selling books at conventions for our website. In his paean to the science fiction anthologies of his youth, Anthopology 101: Reflections, Inspections and Dissections of SF Anthologies, Bud wrote fondly about the great SF anthologies of the 40s, 50s and 60s. Here’s an excerpt from Above the Rest, the chapter dedicated to editor Groff Conklin.

I kept noticing that the stories I liked best, the ones I’d remember from one week to the next, the ones I thrust on my friends with the words “You GOTTA read THIS one!”, all seemed to come from the Conklin anthologies. So, I began pulling his books off the library shelves before I picked Bleiler’s, or Pohl’s, or the others, and when I found (joy of joys!) a dingy little shop near my school that sold ratty old paperbacks for a dime, Conklin’s were the ones I looked for first.

In a note to me about Conklin, Jack Williamson said, “His anthologies…. were landmarks, and I think they had a good deal to do with a wider acceptance of SF…”

In compiling this beast, I’ve read reviews, looked at web pages, and talked to long-time SF readers, fans and pros over and over. When anthologies are discussed, certain names are always mentioned: Pohl, Merril, Bleiler and Dikty, Healy and McComas…. and their relative merits discussed at length. But when Conklin’s name comes up, they invariably nod and say, “Oh, yeah, anything by Groff Conklin.”

Like Bud, my early exposure to adult science fiction was in SF anthologies I found in school libraries, in my case edited by Terry Carr, Robert Silverberg, and Isaac Asimov. But I discovered Conklin soon enough, and one of my favorites was his 1952 anthology of alien invasion tales, Invaders of Earth.

Invaders of Earth was originally published as a hardcover by Vanguard Press in 1952. It was Conklin’s seventh SF anthology, and contained 21 reprints by Murray Leinster, Eric Frank Russell, Donald A. Wollheim, Margaret St. Clair, Theodore Sturgeon, Mack Reynolds, Milton Lesser, A. E. van Vogt, Mildred Clingerman, Fredric Brown, Edgar Pangborn, Katherine MacLean, and many others. Each story had a brief introduction by Conklin.

It also included an original short story by Anthony Boucher, “The Greatest Tertian.”

But its greatest draw was almost certainly the 22-page radio script “Invasion from Mars,” credited to Howard Koch and based on H.G. Wells’ 1895 novel The War of the Worlds, which was performed by Orson Welles’ Mercury Theatre company on Halloween night in 1938, and famously caused a panic among some of its (admittedly small) group of listeners. 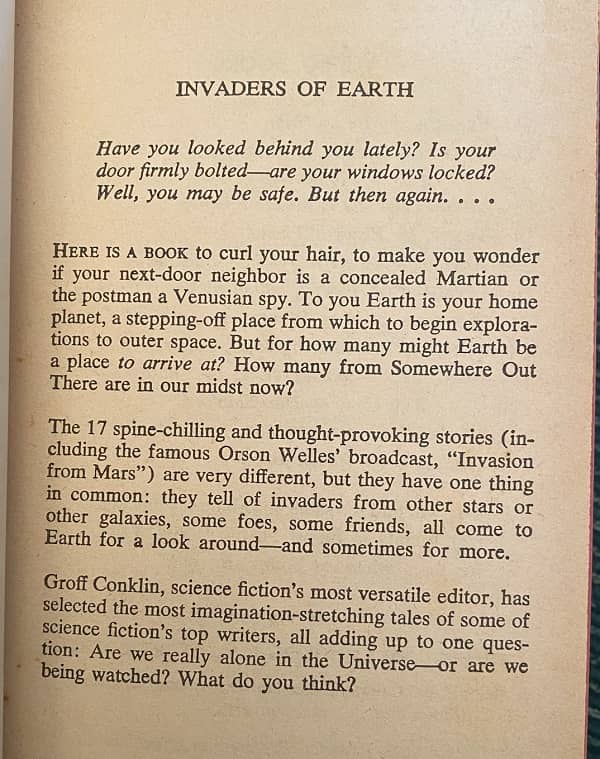 Inside cover of the Tempo paperback

In Anthopology, Bud calls Invaders of Earth “one of the first theme books.” Writing in The Encyclopedia of Science Fiction, Malcolm Edwards and John Clute go significantly further, calling it one of “the first fully fledged theme anthologies to appear in the field.”

Conklin was extremely well read in the field. If you’ve been following along with Matthew Wuertz’s Galaxy magazine retro reviews here at Black Gate, you know that Conklin had a long-running book-review column in Galaxy, starting in issue #1 in 1950 and lasting for almost exactly five years. He was also an SF editor for Grosset and Dunlap.

After its appearance in hardcover, as was customary at the time, Invaders of Earth was reprinted in a series of abridged paperback editions, starting with a slender 272-page 1955 reprint from Pocket Books (above), which contained 15 of the original 22 stories.

In 1962 Tempo books produced a much more complete reprint edition (see the cover at the top of this article). Its 382 pages contained 17 tales, including many of the longer ones cut from the Pocket edition. Here’s the complete Table of Contents for the Tempo paperback.

The hardcover edition had the following additional five stories:

Here’s the complete publishing details for the various editions.

Invaders of Earth was last reprinted by Tempo books in 1964. It has been out of print for 57 years, and there is no digital edition.

Conklin’s thick hardcover anthologies were bound to have at least a few stories appealing to youngsters who were not really looking for sf as a device for satire directed at the author’s time and place, though these were often liked by anthologists hoping, I suppose, to promote sf among “sophisticated” adults.

I don’t consider myself a particularly ‘sophisticated’ adult reader…. and I still very much prefer a straightahead action tale to satire!