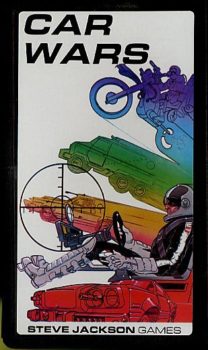 A couple of weeks ago I wrote about the old TSR minigame Revolt on Antares, and that got me thinking about other microgames which were popular back in ye olden days, and that brought to mind one of my favorites, Car Wars from Steve Jackson Games, published in 1981, a vehicle combat game.

If you ever wanted to take part in the fast-driving, hard-hitting action of the Mad Max universe where guns and cars ruled the roads, and the plains and the deserts and the … etc., then you would do well to buckle in and pick up one of the versions of Car Wars which has been made available over the years.

But my first love was the original Car Wars which came in a small, black plastic box, though there were copies of the game which came in just a plastic bag (but who would want that when you could get your hands on a cool plastic pocket box, as they were called?).

The action came in various scenarios from arena battles to highway combat against marauders and the like, and that original pocket box included everything needed to get you on the road to war. Included were the six-sided dice needed for the game, a rules book, maps, vehicle sheets, and cardboard counter pieces of vehicles, road hazards, and more. 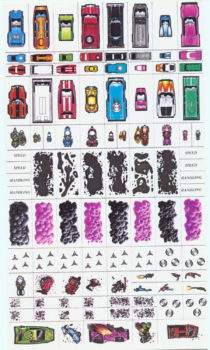 Vehicles consisted of cars and cycles, though later expansion packs would include more, eventually even tanks and helicopters. Each vehicle had its own Record Sheet, not unlike the character sheets of many tabletop role playing games. Upon the Record Sheet could be found plenty of information about a given vehicle, including Size, Weight, Cost, Suspension, Acceleration, Power, Top Speed, Cruising, Weapons, Driver Skill, Gunner Skill, and more. Different parts of the vehicle, the front and back and left and right, had various weapons and levels of armor, depending upon what the player had created, which was usually based upon starting money, though you could play as a campaign and gain more money from winning fights, thus allowing the player to build more powerful or newer vehicles.

As can be expected, nearly all the rules of this game concern driving and fighting. The Movement rules cover a multitude of special Maneuvers, Hazards, Collisions, Jumping and Falling (yes, in a vehicle!), Off-Road combat including Water and Rolling, and even Pedestrian Movement. In the original Car Wars, action was based upon a scale of one inch equaling fifteen feet. 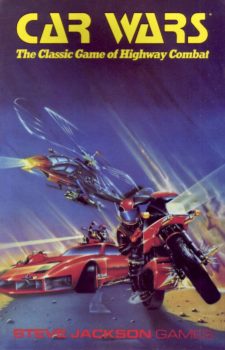 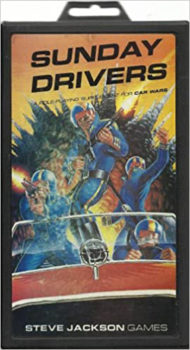 Of course vehicles had weapons, tons and tons of weapons, from Anti-Tank Guns to Flamethrowers, Grenade Launchers, Machine Guns, Heavy Lasers, Spikedroppers, and more. Weapons also had their own statistics, including area of Effect, To Hit, Damage, Cost, etc.

The drivers of the vehicles were considered characters, again much like RPGs, and they did have some skills, all related to combat or driving. However, the characters tended to be quite similar and it was the vehicles that really shined in Car Wars, though a driver without a vehicle could stay in the fight with hand weapons.

One interesting note about this game is that you could play it by yourself. I always found it more fun with several people, but in a pinch I wasn’t above creating my own scenarios and throwing a vehicle or three into it. Also, though a referee is allowed in the rules, it is not necessary to have one.

Over the decades there have been other versions of Car Wars, yet the original will always hold a special attraction to me, including the numerous expansion packs, probably the most common of which was Sunday Drivers.

If you’re interested in playing Car Wars, you can find old copies of the original (as well as other versions) online at the various sales and action sites, but Steve Jackson Games also continues to sell new versions of the original Car Wars, though nowadays everything you need to play comes in a cardboard box instead of the old pocket box. There’s even a Car Wars card game. And if you look around the Web, you can also find GURPS Autoduel, an RPG set in the futuristic Autoduel America, the setting for all things Car Wars. Also, don’t overlook the Kickstarter for Car Wars Sixth Edition. There have even been a video game, novels, and comic books. The Steve Jackson Games site offers most of these items, old and new, for Car Wars. 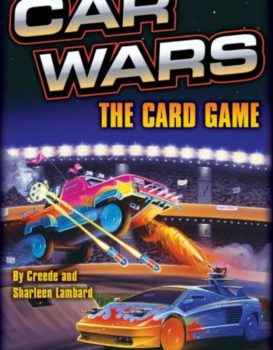 What a great game.

I haven’t played Car Wars, but I spent many an enjoyable hour playing Car Wars: The Card Game. I’ll never forget the cries of, “Blood! Blood!” when the first car received damage and was thus, by some small amount, weaker than the rest.

I remember good times playing this from the plastic bag version! I owned “Chitin” as well, and had an awful lot of fun with that game too!

A year or so ago, Steve Jackson Games Kickstarted a bunch of the old Pocket Box games, including Car Wars and many (all?) of the expansions. You can get them directly from SJGames here: http://www.warehouse23.com/products/car-wars-pocket-box-5
And here’s the list of everything available: https://pocketbox.games/products/car-wars/