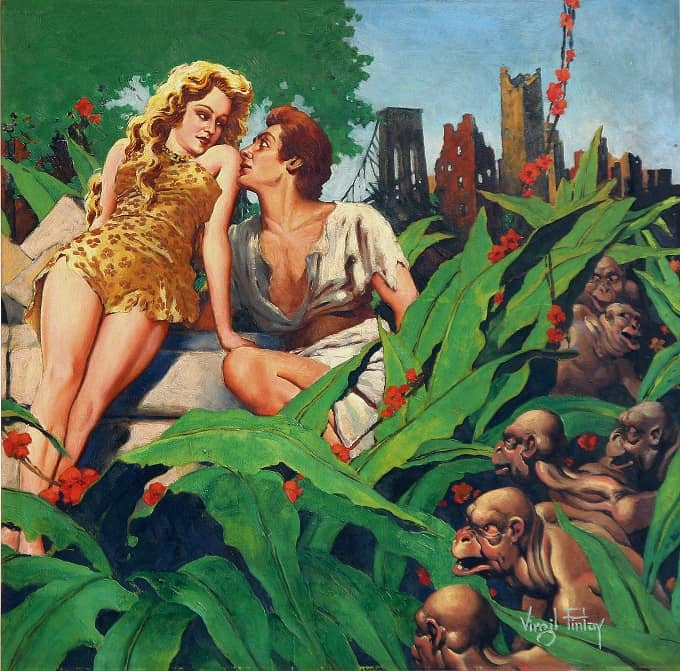 For decades, beginning with the very first Worldcon in 1939, held in New York City, science fiction magazine publishers sent art to the convention, to be auctioned off to fans to help raise money for the con. Particularly in those early years, so much art was sometimes sent that the con didn’t have time to auction it all, and at the end of the auction original interior illustrations from the likes of Virgil Finlay, Edd Cartier and Frank R. Paul would be tossed into the audience for free.

Sadly, no one has ever thrown a free Finlay at me.

The tradition that was started at Nycon 1 continued in 1940 at the second Worldcon, held in Chicago from September 1-2, 1940 – Chicon 1. One of the attendees, and a man who was actively involved in organizing that Chicon, was legendary fan and SF author Wilson “Bob “ Tucker. At the time of the con, Tucker was in the midst of publishing his classic fanzine, Le Zombie, and in issue #40 (July 1941), he posted the results of the Chicon auction. In his list, Tucker identifies (where he knows) the artist, the piece, the fan who bought it and the selling price. I include that list below; I think it’s a fascinating glimpse at the earliest days of SF art collecting.

Not every item was a piece of original art; some books, magazines, fanzines and ephemera were auctioned also, but the vast majority of it was art. Tucker notes that his list is missing some info, as the auction moved so fast and he was rapidly taking notes as each piece was being auctioned. He also notes that the list is only for the Sunday night auction (September 1, 1940), but he did not make the same sort of notes for the continuation of the auction the next night.

The magazines that Tucker notes sent art include Astounding, Unknown, Famous Fantastic Mysteries, Amazing Stories, Fantastic Adventures, Weird Tales, Thrilling Wonder Stories, Startling Stories and Captain Future. Looking at the prices today make one long for a time machine. Cartier interiors, which in some cases were purchased for a dime, would be worth in the thousands today. The Frank R. Paul back cover to the July 1940 issue of Amazing Stories (noted as “Man from Earth”), which sold for $4.80, was later sold through Heritage in 2005 for $16,730. 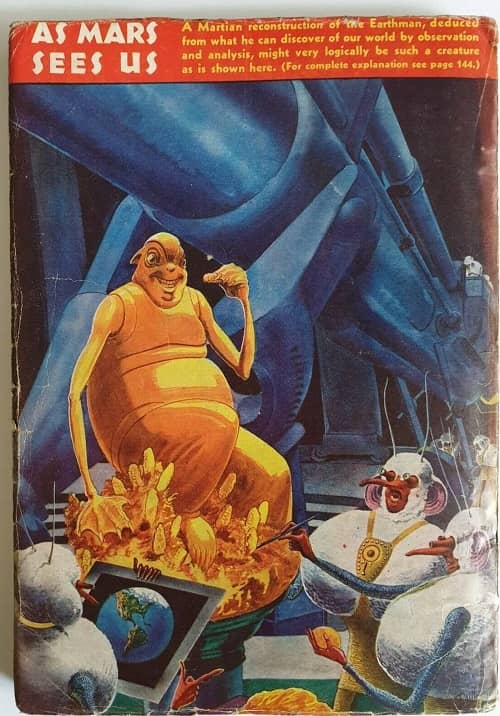 Back cover to Amazing Stories, July 1940 by Frank R. Paul

The first item to be sold that night was Virgil Finlay’s painting for George Allen England’s “Darkness and Dawn,” which ran as the cover to the August 1940 issue of Famous Fantastic Mysteries. It sold to fan Richard Frank for the magnificent sum of $3.40. It reappeared in the marketplace in 1976, when Russ Cochran offered it for $900 in his Graphic Gallery catalog #7.

As I was twelve at the time, and unware of Russ’ catalogs or original SF art, someone else bought it then. However, in 2005 – sixty five years after the Chicon auction – that painting resurfaced once more, this time at auction, where I was fortunate enough to buy it. I was not fortunate enough, however, to merely spend $3.40 (or even $900) for it.

Note from editor Mary Gnaedinger and Finlay (written on illustration board)

That painting is shown at the top of this article; from the condition of its edges, Mr. Frank or a previous owner eschewed placing it in a frame, and in the manner of several old time SF fans, just hung it on the wall by punching a few thumbtacks through its edges. Above you can see the note from editor Mary Gnaedinger and Finlay that was written on a portion of the illustration board. 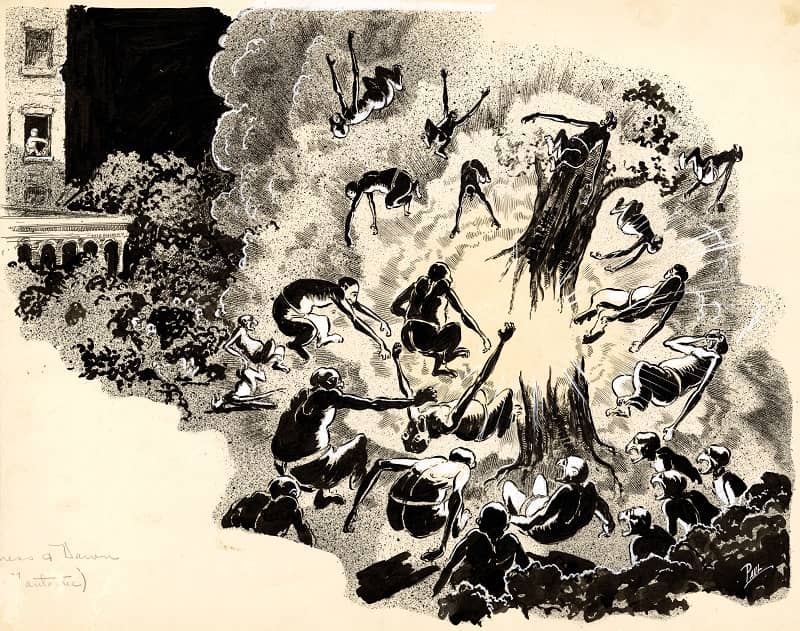 One final note – a few years back, at an estate sale, I bought the Paul interior for “Darkness and Dawn” (show above) that’s mentioned as having sold at that Chicon for $0.45. However, I no longer own it, having traded it to a fellow collector in an art deal.

Frank R. Paul notes on the back of “Darkness and Dawn”

And I still want that time machine!