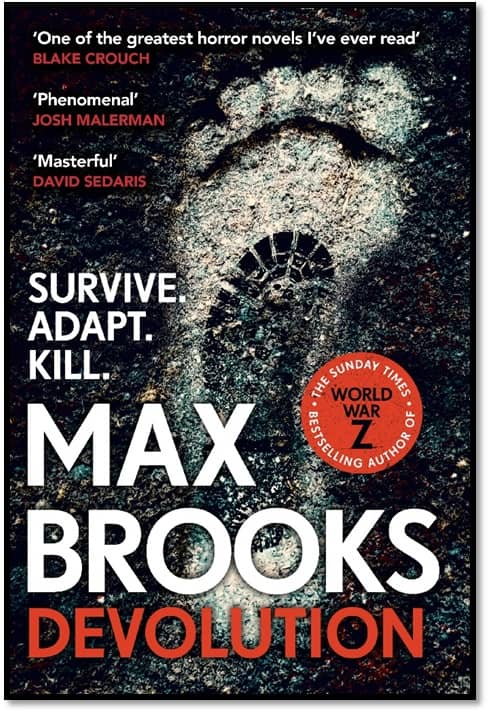 First, let me apologize for not telling you about this last summer. Max Brooks, son of Mel and writer of one of my favorite zombie tales ever, World War Z, dropped another excellent story last year, called Devolution: A Firsthand Account of the Rainier Sasquatch Massacre. I was certain I had written about it until I just went to look for the article and found I did not.

So, let’s start there.

I didn’t grab Devolution the moment it hit the shelves. Why? Because when I read “sasquatch massacre” I pondered the likelihood I could take this book seriously. I mean, come on. Big foot, in most of his iterations, cannot help but evoke images of bad reality TV, insurance commercials and debunked mythos. I wasn’t sure I could set these images aside and willingly go with Brooks into a tale where the words “sasquatch” and “massacre” were used in the same sentence while keeping a straight face.

Having met Brooks on a couple of occasions, I know how seriously he researches his subject matter. We discussed how much of what he describes in World War Z is based in actual science, and how many scientists and doctors he interviewed to get everything just right. So, I should have known better than to think he wouldn’t do exactly the same thing with his topic in Devolution. 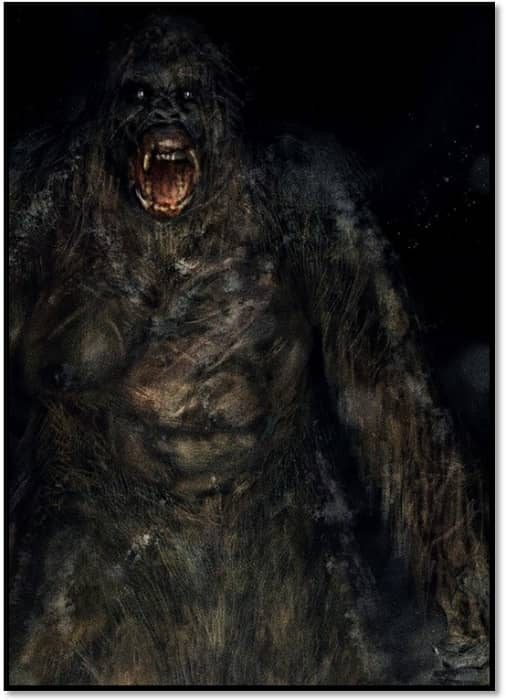 When I finally did pick it up, I binged Devolution in one sitting. And I can report, however late, that I no longer think of Sasquatch as all that amusing. In fact, nature as a whole seems pretty darn ominous now; especially when you realize that what is mostly standing between you and starving, freezing, thirst-ing or infection-ing to death is a very thin infrastructure barrier. We got a tiny glimpse of this when the electricity went out in Texas recently. It’s then that you come to understand that most of what keeps humans going in the modern age is a behind-the-scenes magic none of us truly fathom.

And if that magic suddenly ceased…

I loved everything about Devolution, not the least of which the double meaning of the title. On the surface it refers to the phenomenon when species at the top of the food chain is weakened to the point of being overtaken by a species that is normally further down the line. But without dropping any spoilers, Brook’s Devolution also literally means a de-evolving or a species’ return to a more primitive state. Yes, its pointing to humans cut off from their infrastructure lifelines, but it also means something much darker.

So, loved it? Yes. Recommend it? Absolutely! Will it give you a case of the creeps? Without a doubt.

Ok, now that you’re all caught up. Here’s the next bit. 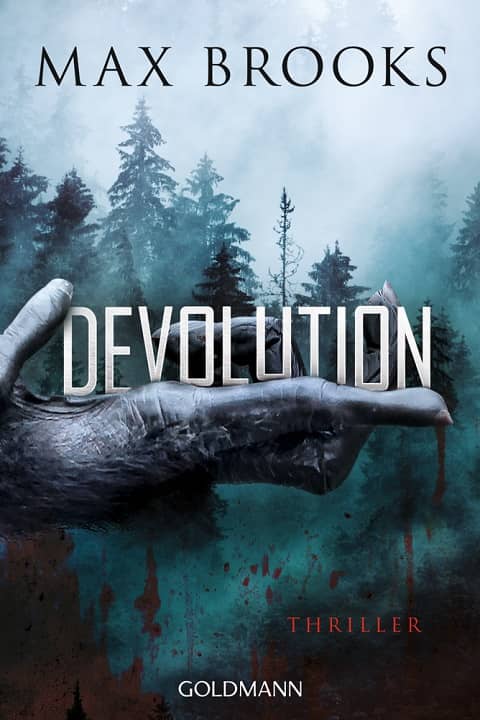 A hot minute after Brooks released Devolution, Legendary Pictures picked up the movie rights. Now at first blush, that’s a good thing. Legendary has a pretty good track record of high-budget monster films such as Jurassic World, Pacific Rim, and King Kong. And it isn’t as though Brooks’ previous book didn’t make a darn good film. I thought World War Z was very well done, and the zombies were depicted in a way that aligned nicely with my imagination.

But here’s the thing. World War Z the film, and Brooks’ book really shared nothing but the title. And frankly it only shared half of that as Brooks’ book is really called World War Z: An Oral History of the Zombie War. What WWZ and Devolution have in common is that both are retrospectives. Both stories are told after the events, with the narrative looking back on them with all the clarity of hindsight. If Legendary takes that aspect out of Devolution, a whole lot of the story will need the change and that makes me worried.

And though I’m not concerned Legendary will cheap out, Devolution has… well… sasquatches. Not one, but a whole community of them. The different types of creatures and their connections within their pack are an intricate part of what makes the story work. So, the creatures have to be carefully crafted. They need to instill the omg-moment of seeing something as rare and beautiful as a white tiger, as well as the absolute horror of that same tiger tearing at human flesh. If Legendary tries the King Kong treatment here, it simply will not work.

No word on whether Legendary’s adaptation will be for the big or small screen, or if Brooks will have any part in creating the screen play (he did not for WWZ). But watch this space for more. For now, either read or listen to Devolution. I recently used one of my Audible.com credits to pick up the audio book and the production values are fantastic. It brought a whole new and even more terrifying dimension to the story. I solemnly swear I will never hack on sasquatch again…

I really can’t parse that hand out, maybe I have had enough coffee yet.

JfD, not sure I get it either, but it looks pretty ominous anyway…

Growing near the the Rocky Mountains where traveled extensively ( about an hours drive from here, many more hours into the interior) ) I never found the idea of Sasquatch amusing, especially during the late 70s /mid 80s , it was literally a little too close home.

Jeff, having grown up in the flatlands of Illinois, I find the Rock Mountains kind of terrifying on their own, so easy to see why sasquatch would seem an entirely feasible threat.
GC