H. Beam Piper was one of my favorite science fiction writers in my formative years. I adored his Fuzzy novels — Little Fuzzy (1962), Fuzzy Sapiens (1964), and the “long lost” novel Fuzzies and Other People (1984), published twenty years after Piper died by suicide in 1964 — and they were one of the first science fiction novels I passed along to my children when they were old enough to read (they were a huge hit). Piper was also well known for his Federation/Empire future history stories, chiefly published in Astounding.

Piper was also a pioneering writer in the field we now call Alternate History, with his entertaining tales of the Paratime police, who patrol alternate timelines to both keep their existence secret and protect them from those who’d exploit or destroy them. They were collected in Lord Kalvan of Otherwhen, a fix-up novel composed of the long novella “Gunpowder God” and novelette “Down Styphon!”, and Paratime, which gathers five tales published in Astounding between 1948 and 1955.

The opening story “He Walked Around the Horses, originally published in 1948, offers an SF explanation for the centuries-old mystery surrounding the true-life disappearance of British diplomatic envoy Benjamin Bathurst during the Napoleonic Wars. Many of the tales are considered some of the finest to appear in Astounding, and have been anthologized numerous times, in The Best of Astounding (1978), Analog: The Best of Science Fiction (1985), Damon Knight’s Science Fiction Argosy (1972), and many other places. The 1950 novella “Last Enemy” was nominated for a retro-Hugo in 2001. (It lost out to “The Man Who Sold the Moon” by Robert Heinlein.)

Writing in The Encyclopedia of Science Fiction, John Clute claims, “Lord Kalvan of Otherwhen remains the most successful and enjoyable of all these tales.” It was published in 1965, just after Piper died. As Clute notes, “He died in his prime.”

[Click the images to see the ones from the best timelines.]

Here’s a few magazine covers depicting scenes from the Paratime stories, spanning fifteen years from 1950 to 1965. Piper was so beloved by Astounding/Analog readers that John W. Campbell noted the appearance of “Down Styphon!” with the words H. Beam Piper’s Last Story right on the cover. I’m not aware of any other writer accorded a similar honor.

Piper enjoys a fine reputation even today, and his Paratime tales are considered hugely influential.

Here’s Steven on the Paratime tales:

In the 50s and 60s, H. Beam Piper published a series of stories in which he elaborated on the ideas of multiple planes of existence and the organization whose duty it is to ensure that the timelines remain unpolluted. These stories, collected in The Complete Paratime, are works which are true classics of the multiple world and alternate history….

[Many] stories concern themselves with the exploits of Verkan Vall, an investigator of the Paratime Police. These stories are written in the manner of short police procedurals and mysteries… the stories, themselves, manage to be interesting and well written, avoiding many of the clichés that much “classic” science fiction indulges in…

Lord Kalvan of Otherwhen is a complete novel… [that] tells the story of a Pennsylvania State Patrol Corporal, Calvin Morrison, who suddenly finds himself in a parallel universe… Lord Kalvan of Otherwhen has more of a feel of military science fiction as Piper describes the strategies and tactics Morrison must use to find his place in the new society. This is offset somewhat by the activities of Verkan Vall and the Paratime Police as they try to figure out their best solution to Morrison’s incursion….

In order to understand the genesis of works by Harry Turtledove, S.M. Stirling and others, it is essential to have read The Complete Paratime. The fact that these stories are well written and entertaining only makes it easier to read them and be thankful that Ace has elected to keep them in print.

Here’s a look at The Complete Paratime. 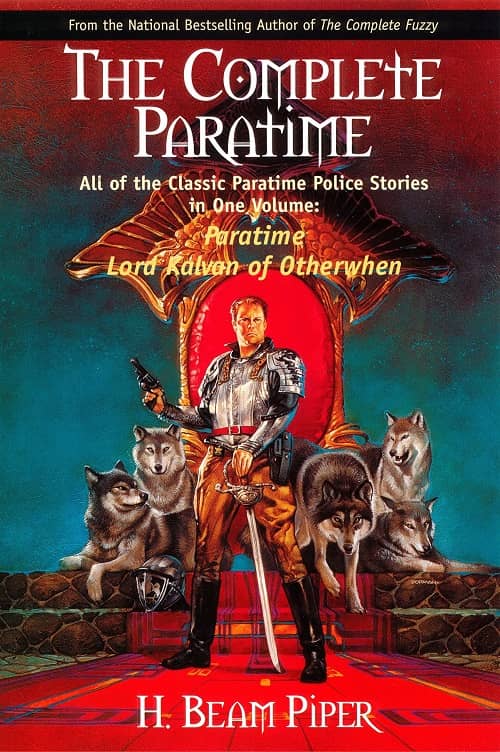 Like The Complete Fuzzy, the Ace omnibus edition of Piper’s Fuzzy novels, The Complete Paratime is still in print and available some two decades after it was released — an astonishing accomplishment for a collection of mid-Century science fiction tales by a largely unknown author that’s never had a film adaptation.

Back covers for Lord Kalvan of Otherwhen and Paratime by H. Beam Piper

Here’s the complete Table of Contents for the 1981 Ace Paratime collection, which contains two novellas (“Last Enemy” and “Time Crime”) and three novelettes.

I’m not sure precisely sure what it is about the fiction of H. Beam Piper that seems to compel other writers to pick up the threads of his tales, but whatever it is, it’s pretty powerful. The Fuzzy series was continued in Fuzzy Bones (1981) by William Tuning, Golden Dream: A Fuzzy Odyssey (1984) by Ardath Mayhar, and most recently in John Scalzi’s Fuzzy Nation (2011), which brought a whole new generation of readers to Piper’s work.

But even that impressive legacy is dwarfed by the Lord Kalvan stories. No less than eight volumes currently exist, chiefly by John F Carr, who also edited the 1983 collection The Worlds of H. Beam Piper. The first in the series, co-written with Roland Green, was Great Kings’ War (1985).

Though Piper died in 1964, his worked remained hugely popular through the 70s and 80s, with multiple Ace editions of his most popular novels, including the Fuzzy volumes. Space Viking, The Cosmic Computer, and his Federation and Empire collections. 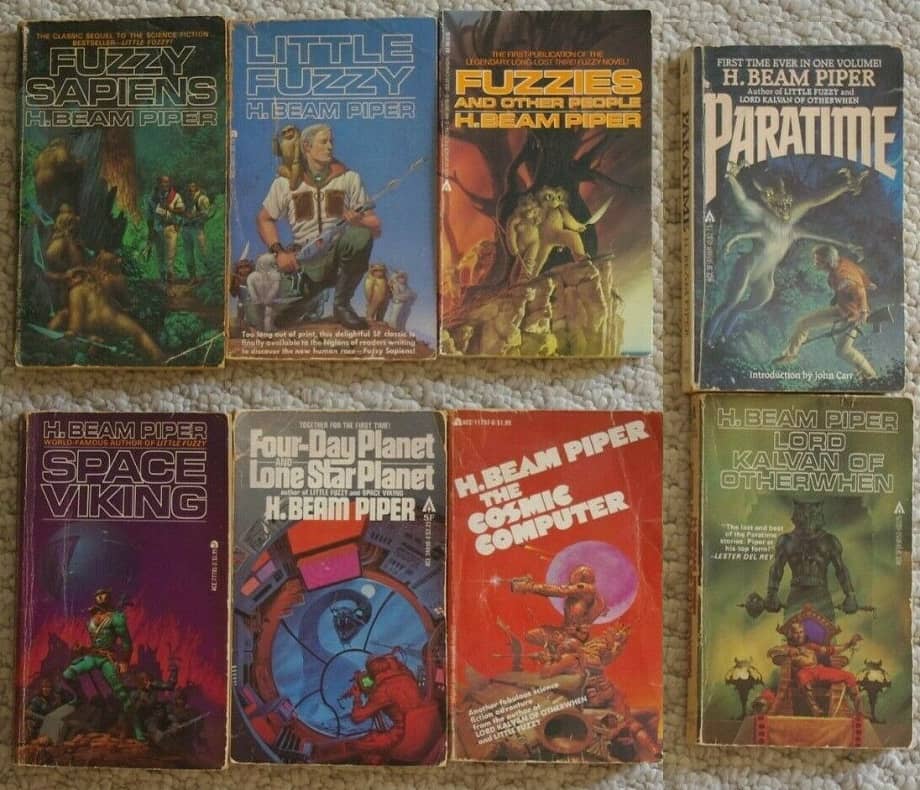 Some of the Ace paperback releases by H. Beam Piper

Although they were the last two stories written, “Gunpowder God” and “Down Styphon!” were the first to appear in book form, published as Lord Kalvan of Otherwhen, a paperback original from Ace Books in 1965 with a Jack Gaughan cover. Lord Kalvan was reprinted in 1977 with an iconic cover by Michael Whelan, and that’s the one that remained in print through much of the 80s. It was followed by the Paratime collection in 1981, which gathered all the earlier stories, and the omnibus edition in 2001.

None of these books currently has a digital edition; however, you can get most (all?) of the stories in digital format in The H. Beam Piper Megapack, published by Wildside in 2013.

Yeah, but what does Steven know about Alternate History!

Just read Piper’s Ministry of Disturbance and Other SF, which has some of his best Future History stories in it. Piper is sadly under appreciated.

> Yeah, but what does Steven know about Alternate History!

I hear the Steven Silvers in alternate timelines know a TON more than he does. 🙂

> Just read Piper’s Ministry of Disturbance and Other SF, which has some of his best Future History stories

Wait, what?? *scrambles to open Amazon*

How can there be a Beam Piper collection that I know nothing about? Holy cats, THERE IS. And it collects five novelettes from his best period? I need this!!

Ministry of Disturbance and Other Science Fiction (Aegypan, 2007)

Space Viking and The Cosmic Computer were also cited by Traveller RPG creator Marc Miller as among his key influences when developing the game.

Of the SF writers of that era, I can’t believe Hollywood has never tackled anything by Piper or James H. Schmitz, two authors whose work seems tailor-made for the big or little screen.

Traveller RPG creator Marc Miller cited Space Viking and The Cosmic Computer as key influences on the creation of the game.

It was H. Beam Piper (and his protégé, Prof. Jerry Pournelle) that inspired me to begin reading military history and to begin writing SF&F. Ave, Master.

I second those who wonder why no one has ever adapted any of Piper’s works for the big or little screen. He did make his mark on RPGs though; he had significant influence on Traveller for example.

> Space Viking and The Cosmic Computer were also cited by Traveller RPG creator Marc Miller
> as among his key influences when developing the game.

You know, that’s very true, and I probably should have mentioned it. I think Poul Anderson and H. Beam Piper were probably the most influential on Miller. And also E.C. Tubb, as Howard Andrew Jones pointed out to me as we were putting together this article on the origin of Classic Traveller for Tor.com last year:

Not, not vanished. But any comment with an embedded link needs to be cleared first by a moderator (usually me). So they can take an hour or two to show up.

Thank you for clarifying about using links, and sorry I didn’t use the one you pointed to regarding Traveller.

I am slowly working my way through Tubb’s Dumarest of Terra series. I am wondering if there is another SF author who wrote as many books about the same character. One that isn’t a merely pseudonym for several different writers, like the Scorpio or Gor series.

And the Gor books (35 titles) are all by John Lange writing as John Norman, I’m pretty sure.

To the best of my knowledge, no multiple writers in either case.

It’s probably not a surprise that all three of those series were published, at least for a while, by DAW.