Ah, yes, it’s that time again to look back at Galaxy Science Fiction. The rumor that I was traded for a box of unopened board games is untrue. But John has quite the penchant for such things, so I hope no one puts this to the test. I’m quite happy working in the Black Gate office.

The cover, titled “Space-Time in One Tough Lesson,” is by Ed Emshwiller. His birthday was February 16, 1925. And since this is being published less that a week later, it seems fitting to wish him a happy birthday. If he were still alive, he’d be 96 this year.

“How-2” by Clifford D. Simak — Gordon Knight, like so many other people, works a job with very limited hours, allowing him ample leisure time. His hobby is building things, following the directions of various How-2 kits he orders. His latest is for an artificial dog, but he finds a robot kit sent to him by mistake. Rather than sending the kit back immediately, he decides to see if he’s up to the challenge of assembling a robot. But once he assembles Albert, Gordon finds he doesn’t have the heart to send the robot back. 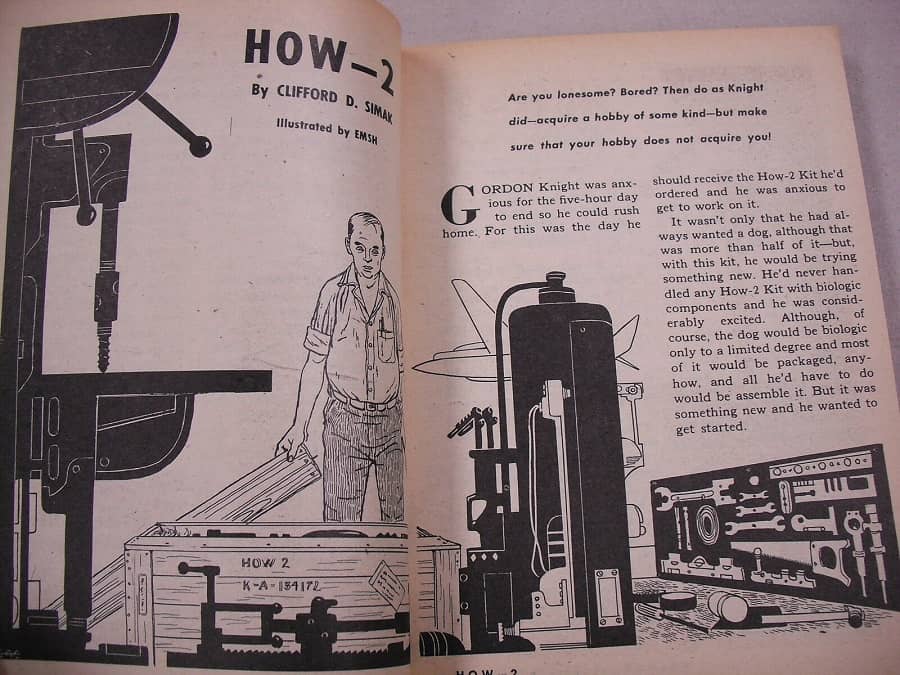 Albert immediately takes control of the situation, asking about Gordon’s priorities. Rather than tackling the work personally, Albert has Gordon order various parts that Gordon thinks will become attachments. Instead, Albert uses the parts to build additional robots and thinks of them as his children.

After a routine inspection of Gordon’s home, the IRS finds out about all of the robots and decides to tax Gordon for capital gains. At nearly the same time, the How-2 Kits company files a lawsuit against Gordon stating that Albert was an experimental model sent by mistake and that Albert and all robots produced by Albert are their property.

Gordon’s neighbor, Anson Lee, is a lawyer who offers to represent Gordon. But he warns him that he’s not that great of a lawyer. Albert offers a solution… to build additional robots — ones who specialize in legal matters.

I like that the issue opened with this story. It’s light-hearted and humorous. And there’s something about humorous stories involving robots that resonates with me. It was adapted for radio in an episode of X Minus One by William Welch; it aired on April 3, 1956. 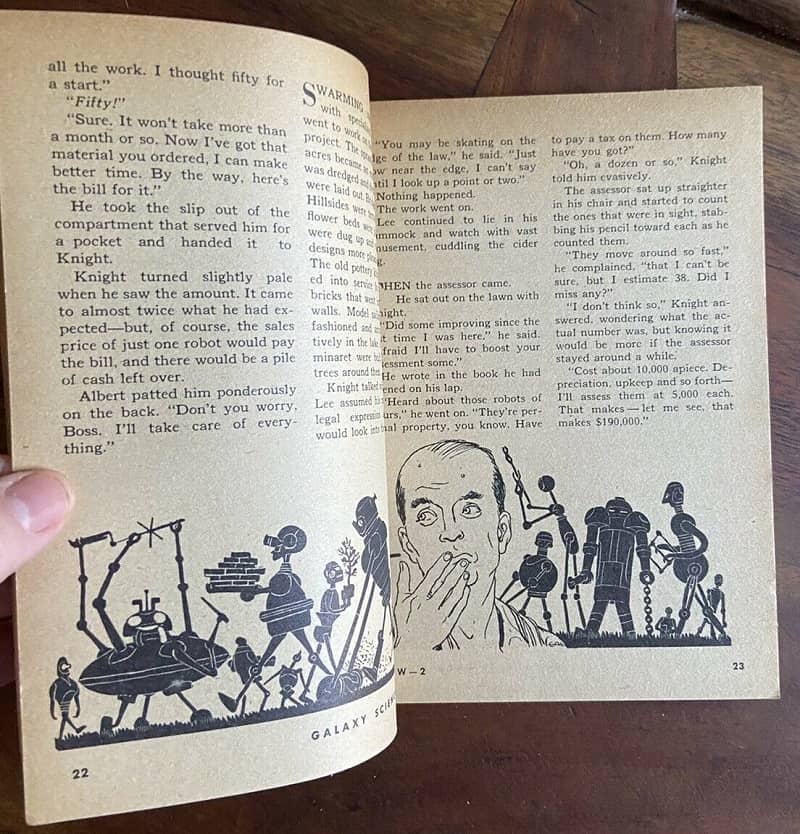 Interior art for “How-2”

“The Nostalgia Gene” by Roy Hutchins — Edgar Evans doesn’t fit with present society and longs to live in the past. With his talents in engineering, he eventually creates a time machine and travels to 1893, making sure to destroy the machine after it sends him back. And though his longings for a simpler time are satisfied, his descendants find themselves dreaming of a different society as well. Since some of them also have his talents in engineering, history seems bound to repeat itself, albeit with different people and with different results.

It’s interesting that with this type of plot, a character that resolves his or her conflict in turn creates the same conflict for other characters (their descendants). Hutchins uses a bit of cleverness in stacking characters and desires into the overall plot. Hutchins had a few other short stories published in Beyond Fantasy Fiction (a short-lived fantasy magazine also edited by Galaxy‘s H. L. Gold). In fact, Rich Horton reviewed one in this Black Gate article.

“The Laxian Key” by Robert Sheckley — The AAA Ace Interplanetary Decontamination Service is in action again with Richard and Arnold. Arnold comes to the office with a machine that is a Free Producer that he got for a very reasonable price. What it produces, he doesn’t know. But it provides its own energy by drawing it from seemingly nowhere. And whatever it produces can surely be sold for profit. Easy money, right?

And the answer is (obviously) that no, there is no easy money. But the point of these tales is to be entertaining and humorous. And the humor still works 65 years later. 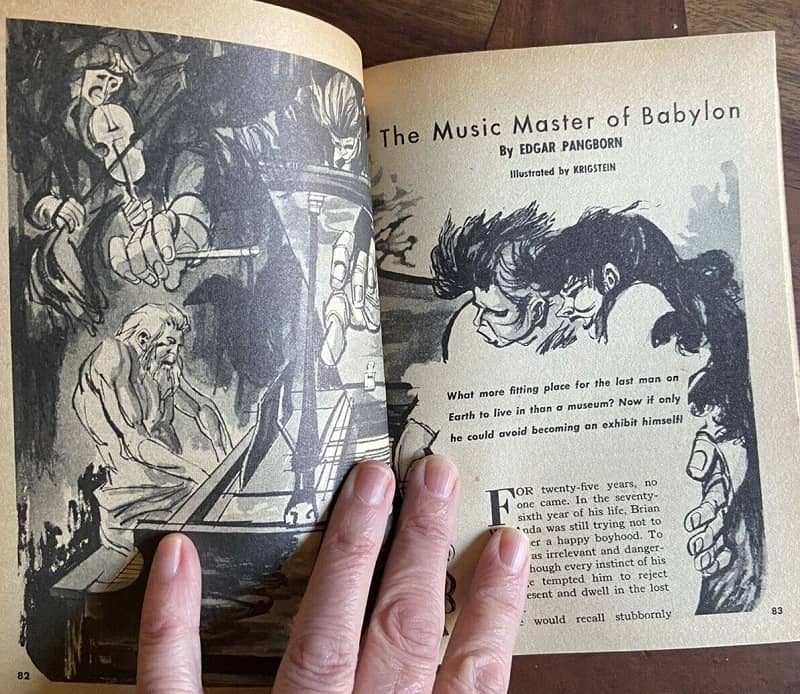 “The Music Master of Babylon” by Edgar Pangborn

“The Music Master of Babylon” by Edgar Pangborn — Brian Van Anda survives alone. The septuagenarian hasn’t seen a living person for a quarter century and doesn’t expect to. Born in 2020, he’s lived through the departure of the first interstellar mission, a final war that claimed so many lives, and now solitude.

Brian lives in a museum in Manhattan that’s devoted to human history and music. A skilled musician, he continually works on The Project — playing the last sonata by Andrew Carr. Not just playing it, though. His ambition is to master it — to play it in a way that Carr couldn’t even play it himself. And while he practices one evening, he sees a faint light outside. He soon realizes that it’s a bonfire. And that his long solitude is coming to an end.

There are a lot of good stories in various issues of Galaxy. But this one is something special — easily in my list of top five stories of all issues I’ve read to date. Pangborn was a master of language and building an intriguing plot. He studied music at Harvard, enrolling when he was only 15 years old, but he left after a year or two without graduating. He also studied at the New England Conservatory of Music — again without graduating. Much of his early work for pulp magazines was written under pseudonyms for about twenty years.

And while I haven’t read any of those stories, his contributions to Galaxy are noteworthy (here’s my review of the Galaxy issue which contains his story “Angel’s Egg”). He combined his knowledge and love for music along with decades of writing experience to create something outstanding in this issue. 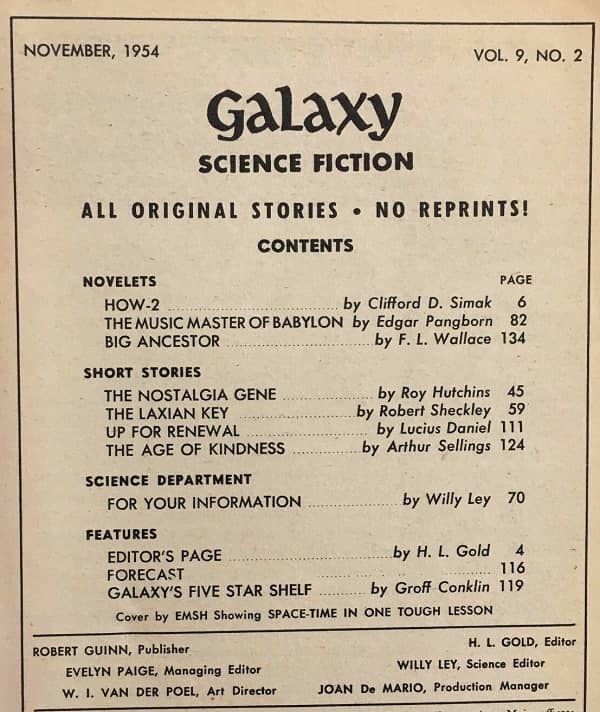 Contents page for the November 1954 issue

“Up for Renewal” by Lucius Daniel — Howard Kent debates having his youth restored a second time. The process improves appearance but also shaves five years off of someone’s life expectancy. Howard thinks that perhaps it’s best to simply age rather than sacrifice another five years, but his wife argues that “aging is a nasty process” and one that he shouldn’t have to go through, even if it does reduce his lifetime.

There’s a small twist ending that’s mildly amusing. If nothing else, I think the story lets a reader unwind a bit after reading Pangborn’s masterpiece.

“The Age of Kindness” by Arthur Sellings — Bruno is a deformed man who lives in a society that has no deformities. But they do have kindness. No one insults Bruno either to his face or behind his back, but they set limits to what he can do.

Bruno learns of a space exploration project and wishes to join. It’s a one-way ticket for someone to Venus, and given that he doesn’t fit in on Earth, he hopes a new world might be better for him. He doesn’t have the experience (or approval) needed, of course, so he devises a plan to sneak aboard the rocket and pilot it himself.

I didn’t connect strongly to this story. It felt like a general expansion of a single theme (what it means to be human) with a somewhat implausible plot, and it seemed a bit too basic. Looking back at a review I made of Sellings’ story “The Departed” from the August, 1954 issue, I’m wondering if he’s just not an author that connects with me.

“Big Ancestor” by F. L. Wallace — A variety of humanoids from various worlds share a common ancestry and wish to discover their true origin. A small crew voyages through part of the galaxy to find out who and where they came from. The answer they find is horrifying.

Wallace uses a cast of characters of varying alien races that are a spectrum of human genetic evolution. He gives them distinct personalities and ties them to a set of traits for each race. It works well as a whole.

The issue also contains Groff Conklin’s review column “Galaxy’s 5 Star Shelf” and Willy Ley’s “For Your Information.” Ley covers the history of discovering asteroids, beginning with the planetoid Ceres. I wonder what Ley would think of the Dawn probe that NASA sent to Ceres years ago. I’m sure he would love to expand upon the findings.

Good to have you back you with us, Matthew.

And I’ve never heard of that Pangborn story, but boy. It sounds terrific. I’ll have to venture into the Cave of Wonders and find this issue to read it!

Pangborn was a great writer who is shamefully neglected today. It didn’t help anay that he died relatively young ion 1976. This particular story has been anthologized many times.

Some day I’ll learn to edit before I hit send.