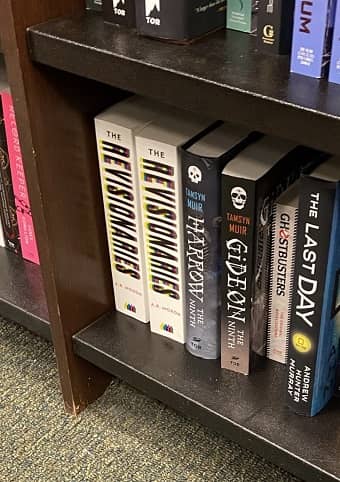 I made my monthly pilgrimage to Barnes & Noble today, to pick up the latest issues of Asimov’s SF and Analog, and the last print issue of Interzone. And also to browse the SF section to see what was new.

I found a deep-sea horror novel by Mira Grant that I’ll probably write about later, the opening novel in a new Iron Druid spin-off series by Kevin Hearne, and The Revisionaries, a 600-page debut novel by A.R. Moxon that sounded very intriguing. When I came home and did a quick search, I found a lot of acclaim and tantalizing plot summaries — none of which gave me a true sense of what the book was about.

Martin Seay (author of The Mirror Thief) calls it “A headlong adventure yarn set in a vividly-imagined cityscape,” and The New York Times labeled it “A spectacular invention… One shudders to imagine what Moxon would do with the means to make a horror movie.” And writing at NPR, Black Gate blogger emeritus Amal El-Mohtar says “I’m almost irritated by how much I enjoyed it… I’m astonished by how compulsively readable it is.” Here’s a clip from her full review.

The Revisionaries takes place in at least three locales across at least four levels of reality and is composed in at least five typefaces. It is, by turns and often at once, surreal, absurd, horrifying, earnest and satirical….

I could say that it begins in a derelict place called Loony Island, with the sudden release of patients from a mental hospital, and becomes a retelling of the Biblical story of Jonah by way of a travelling circus and heaps of metafictional meditation on the difference between gods and authors, and that would be a start. It’s a literary puzzle-box that also put me in mind of a tidier, more self-conscious The Filth, and if I keep making comparisons to comics it’s because the book invites them, from its epigraph at the beginning quoting Scott McCloud to the transformation of a key character into a villainous caricature of Superman to the literal appearance, on page 415, of a really good cartoon.

Given all that, I’m astonished by how compulsively readable it is… Moxon’s a genuinely wonderful storyteller.

The Revisionaries was published by Melville House on December 1, 2020. It is 608 pages, priced at $19.99 in trade paperback. Get all the details here.