Maybe it’s because I’ve only recently started paying close attention, but it seems to me that the RuneQuest RPG has been experiencing something of a renaissance since returning to the fold at Chaosium. Certainly there’s been a flurry of attention-grabbing new releases anyway, including the epic and original Red Cow campaign, the tale of a small clan’s desperate battle for freedom against the oppressive Lunar Empire, a tribe of werewolves, and even darker threats; the Rough Guide to Glamour, a compilation of long out-of-print articles on Lunar magic and colorful personalities; and of course the gorgeous new hardbound rulebooks.

But the drumbeat of new releases has not slowed, and I recently acquired two adventure anthologies that make excellent resources for any RPG fan: The Smoking Ruin & Other Stories, a collection of three long ready-to-play adventures, and The Pegasus Plateau & Other Stories, containing seven shorter adventure scenarios.

Both are essential purchases for serious RuneQuest players. The first focuses on an area in Dragon Pass known as the South Wilds, and includes the full-length scenario “The Smoking Ruin,” in which the players tread the haunted streets of an ancient city in search of a lost artifact. The Pegasus Plateau & Other Stories contains seven fast-run adventures set in ghoul-haunted catacombs, mystic ruins, the deserts of Prax, and the rocky pinnacle of the Pegasus Plateau. Both books are gorgeously designed and well written; here’s a peek at the lovely interiors.

First up: The Smoking Ruin & Other Stories. 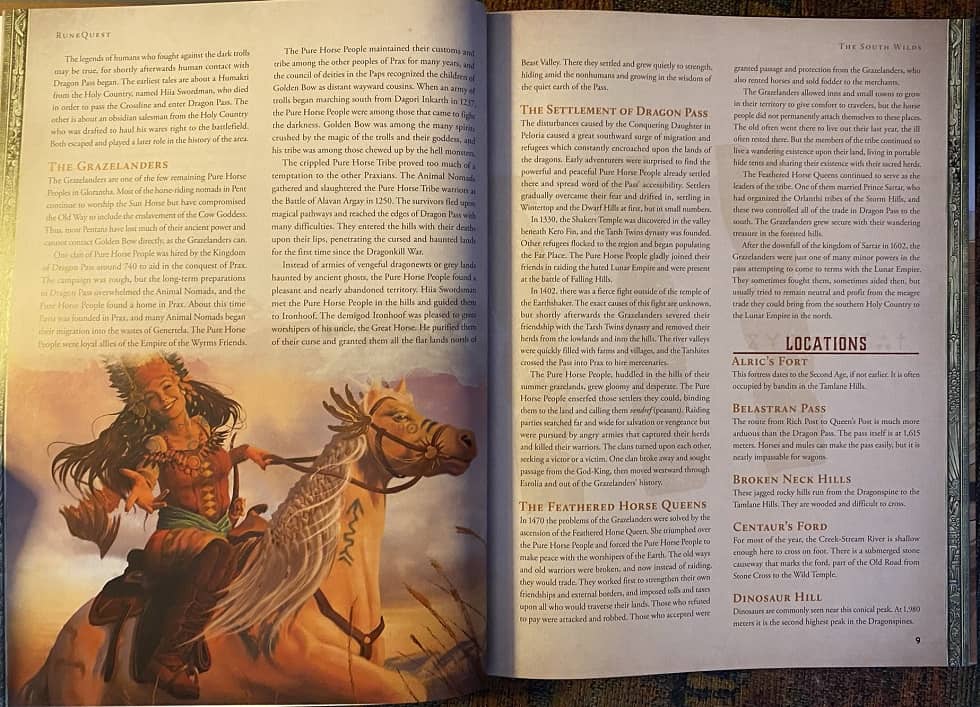 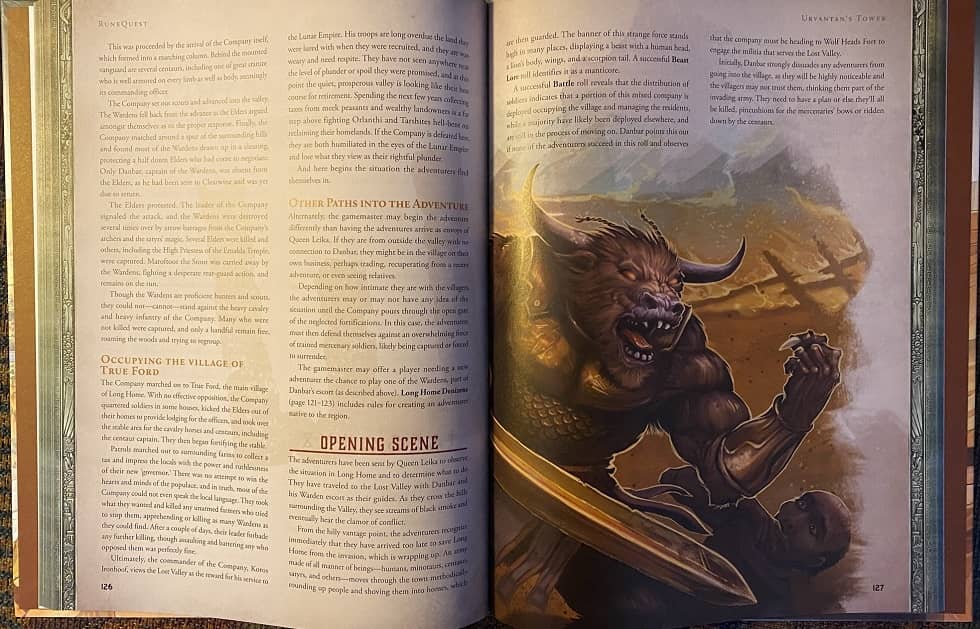 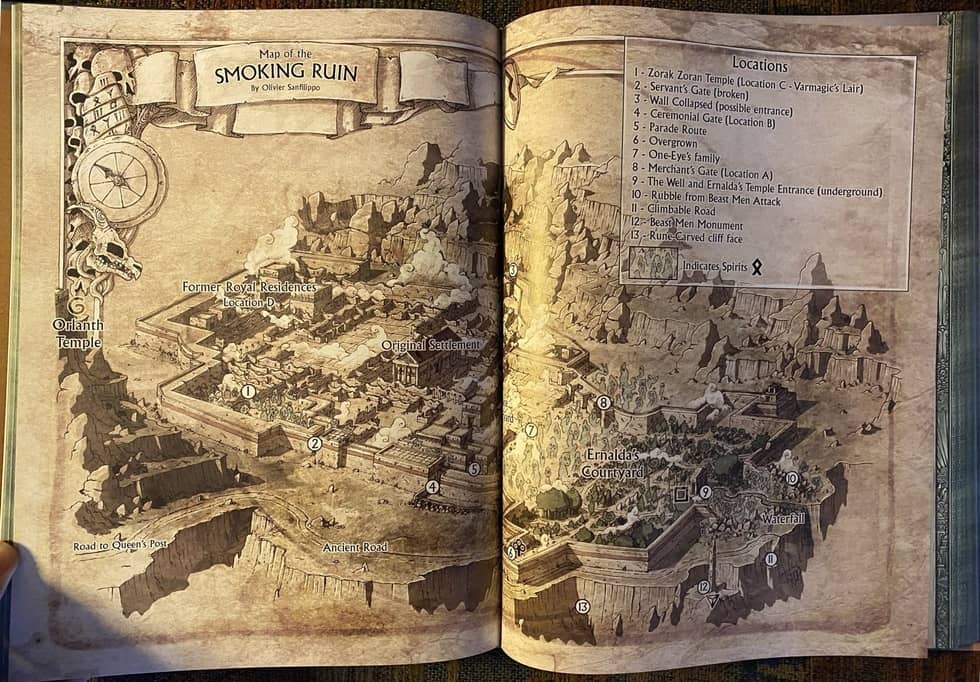 – A highly detailed gazeteer of the dangerous and mysterious region of Glorantha known as the South Wilds. You’ll learn the secrets of the Wild Temple, a vast network of megalithic standing stones and a sacred Beast Man shrine, and the Lost Valley, a secluded, seemingly forgotten refuge known to its inhabitants as Long Home.

– The Smoking Ruin: a full-length scenario taking adventurers into the haunted streets of a once great city in search of a lost artifact.

– Urvantan’s Tower: a full-length scenario set in the Lost Valley, that pits the adventurers and its Wardens against a monstrous army, with their best hope for victory secreted in the tower of the legendary, and mysteriously absent, sorcerer Urvantan.

– The Grove of Green Rock: a serialized scenario set over the span of several years, giving the adventurers the opportunity to participate in an annual ritual intended to reinvigorate the elves’ fading magic in a sacred grove and reestablish their claim to the region. 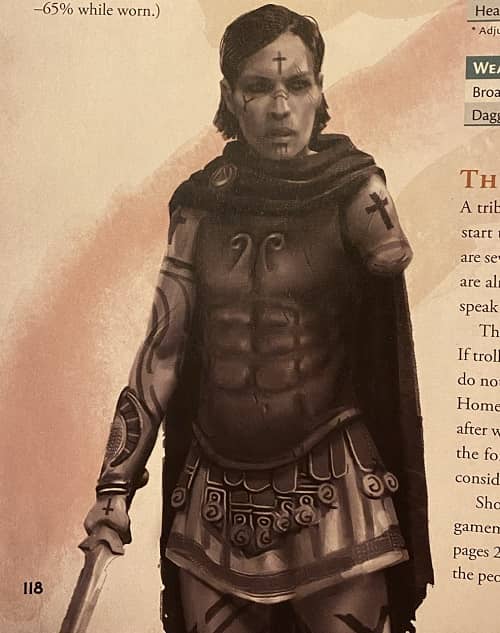 Antonios S’s review at RPG.Net hits many of the high points:

The artwork is great, and continues with the line’s very strong tradition. It looks ancient Greek; it looks ancient Mesopotamian; it looks fantastical and original. My hat is off to the artist behind the depiction of Captain Terentha, a fearsome 50-year-old female warrior who is missing an arm. First, think how many NPCs miss limbs in fantasy settings; none, maybe. Second, think how many artists got to draw those NPCs humanely, without over-the-top artificial constructs. The captain is an emphatic example of how a one-armed, badass, middle-aged woman looks like, and how people with disabilities can be positively depicted in an RPG…. The production values are very high as usual. Cloth bookmark: check. Full colour and overall solid layout: check.

Conclusion: If you didn’t know what to do in Glorantha under the HeroQuest rules, The Smoking Ruin & Other Stories provides an emphatic answer. Both setting and system deliver on everything they promised. The backstories go deep into the core of the adventures, the challenges are unique, the flavour is one-of-a-kind, the colours are vibrant, and the smells are breathtaking. It has a few warts (it could have helped the GM much more than it currently does), yet this doesn’t change anything. Buy, prepare, and play immediately; do not let it linger on your bookshelf.

The Pegasus Plateau was right on the heels of The Smoking Ruin, arriving less than a month later. Here’s a peek inside. 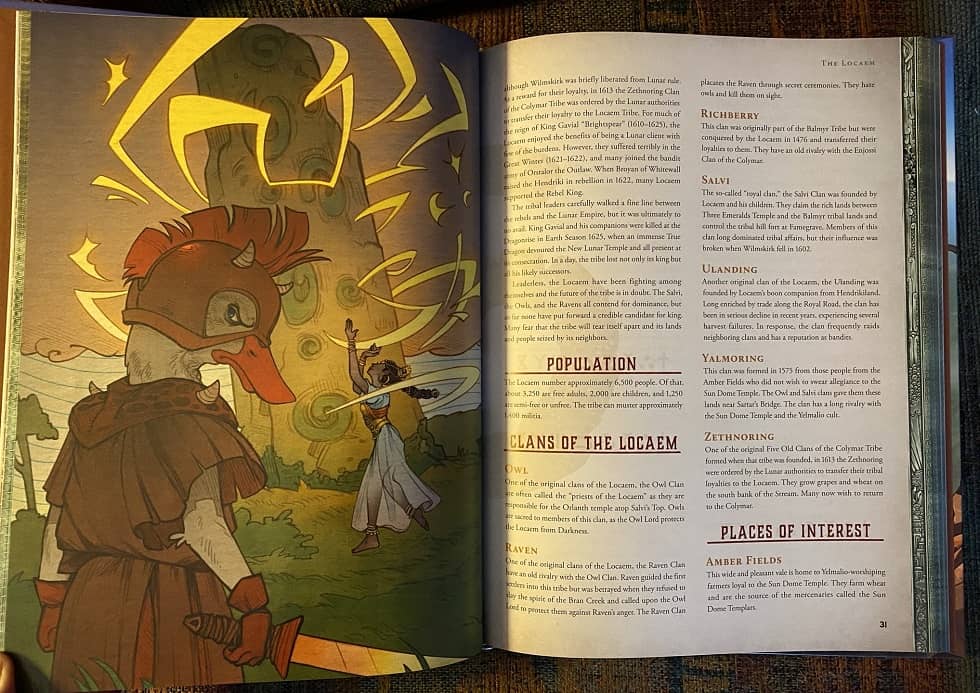 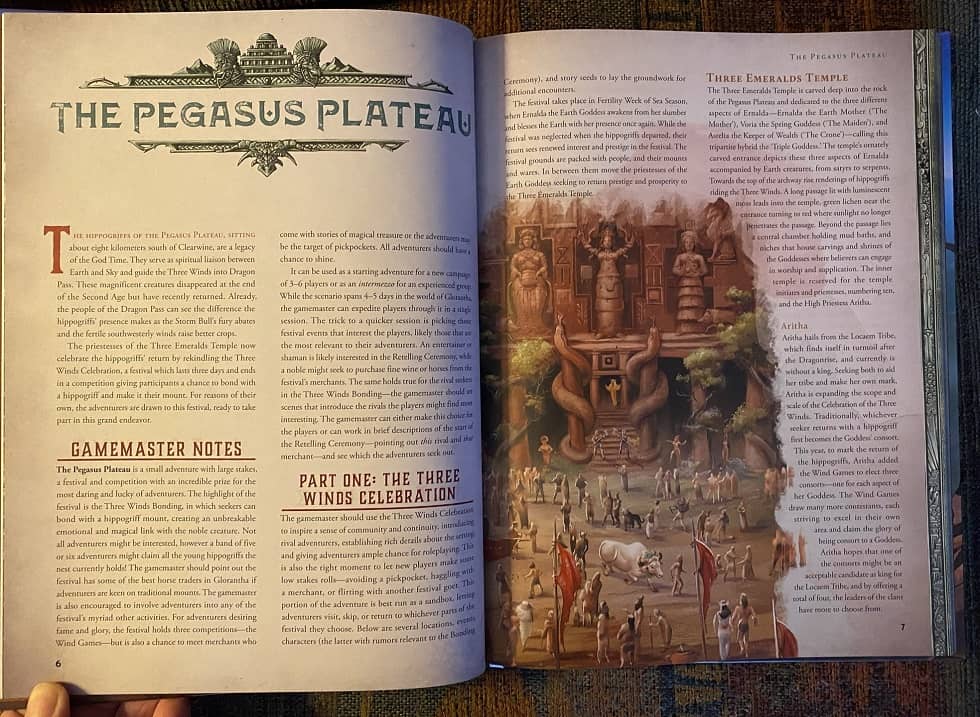 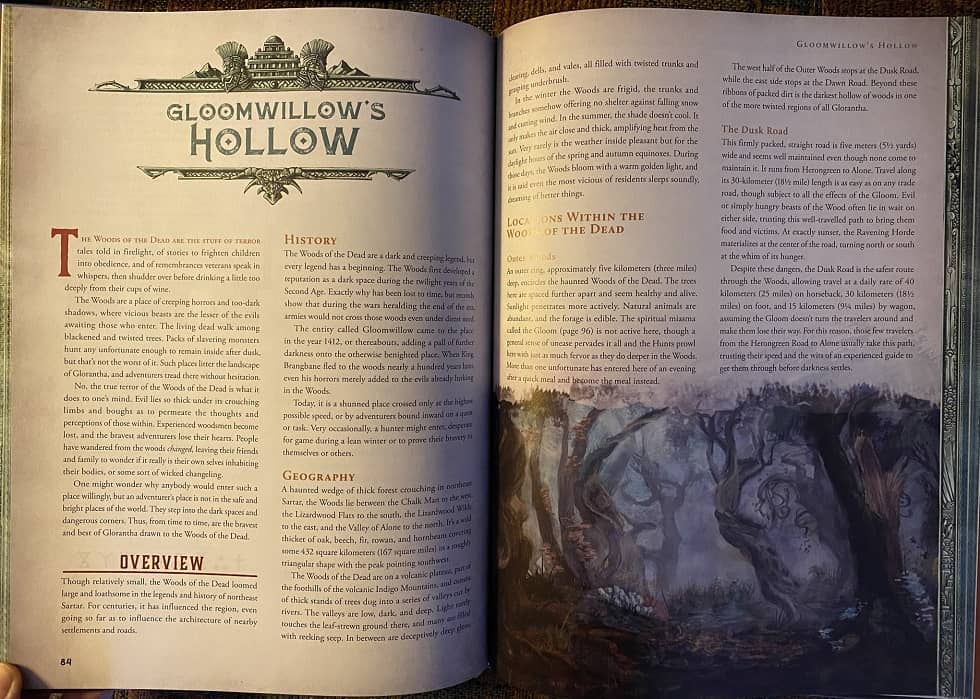 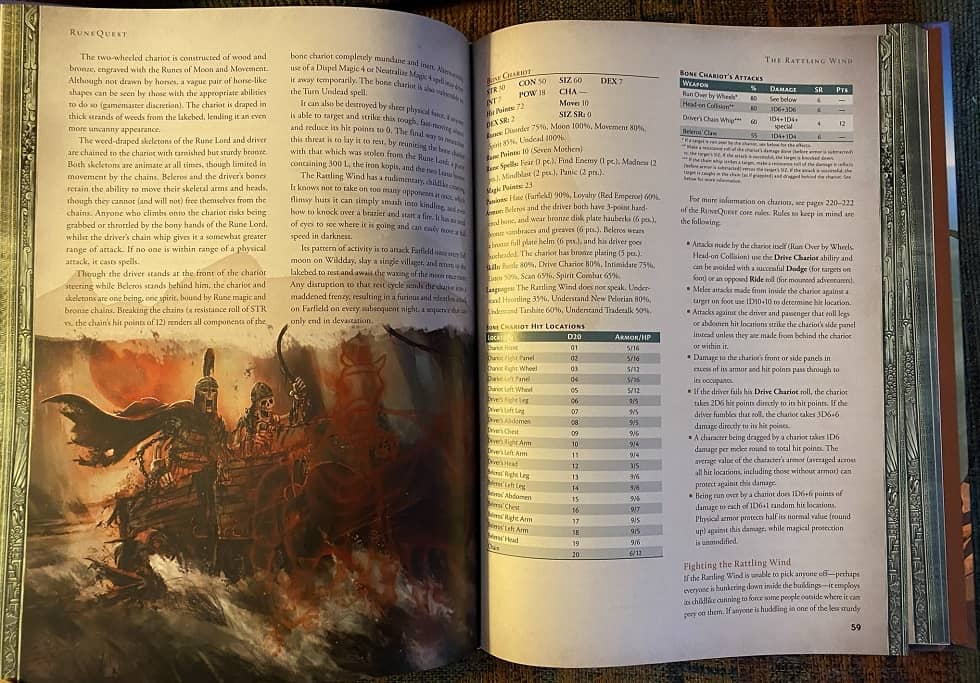 Here’s the description for The Pegasus Plateau.

Set in the mythic fantasy world of Glorantha, The Pegasus Plateau & Other Stories features seven complete ready-to-play adventures, taking you from ghoul-haunted catacombs, into mystic ruins, across the arid deserts of Prax, and up to the rocky pinnacle of the Pegasus Plateau!

The seven adventures are:

Additionally, The Locaem is a new tribe for use by gamemasters and players, and the lonely village of Renekot’s Hope, perched between the Lunar Empire and its enemies in Sartar, provide refuge… or a springboard for adventure!

Suitable for new and veteran gamemasters and players, each adventure spotlights a unique aspect or area of Dragon Pass. They can be used as introductions to Glorantha or as part of existing campaigns.

There are seven adventures, one tribe, and a village… one of the most modern elements of Pegasus is in the variety and diversity of the stories told here.

It’s probably a stereotype that classic RPG adventures were all dungeon crawls, but looking back many of them were. Even the RQ ones. “Sandbox” is the term we use these days and I still advocate it as a valid form of “emergent storytelling” (that is for another post), but Pegasus brings a hard focus to narrative storytelling, making RQ feel more in line with younger games. The range of stories is really one of the book’s best features… These are seven different visions of Glorantha, not a unified campaign. If one doesn’t speak to you, the others very likely will.

You will find a story about a wedding ceremony gone wrong, a ghoul king in a forest of the undead (HeroQuest players might have seen this before…), a chance to tangle with Lunar soldiers, a murder mystery, a sort of Glorantha Olympics, Glorantha’s answer to Stephen King’s Christine, and a ruin where you have the chance to learn from one of Glorantha’s more interesting features. These are all packed with surprises, memorable characters, and occasionally deadly dangers. Authors Jason Brick, Rachael Cruz, Steffie De Vaan, Jason Durall, Helena Nash, Steve Perrin, Diana Probst, Jeff Richard, Dom Twist, and John Wick have done an admirable job of providing a full palette of Gloranthas.

If you take nothing else away from this review, take at least this; RuneQuest: Roleplaying in Glorantha has all the DNA of its predecessors, but it is no more RQ2 than I am my father. If you are staying away from RQ because you feel it is too dated, too dense, too mechanical, take a look at this. The lesson is that rule systems do not age, presentation and application does. This is an RQ collection of adventures every bit as cutting edge as anything other system on the market.

Here’s the back cover for both books.

Back covers for The Smoking Ruin and The Pegasus Plateau. Click for legible versions

We’ve looked at a lot of great RuneQuest releases recently. They include:

A Rough Guide to Glamour Goes Gold by Nick Brooke (2020)
Return to Dragon Pass with The Red Cow Campaign by Ian Cooper, Jeff Richard, and Greg Stafford (2020)
Numenera, Nyarlathotep, and RuneQuest Glorantha: Some Recent Slipcase Sets (2019)
Cults of Prax: Then and Now by Michael OBrien (2019)
The Complete Borderlands Campaign now Available in PDF from Chaosium (2019)
Resurrecting RuneQuest: An Investigation by the Tales of the Reaching Moon Editorial Staff by Michael OBrien (2017)
Chaosium Announces New Version of RuneQuest (2017)
Chaosium’s Borderlands: Can Playing RPGs Really Make You a Billionaire? (2016)
RuneQuest: Korantia and Mythic Britain by Howard Andrew Jones (2015)
RuneQuest 6 by Pete Nash and Lawrence Whitaker (2014)

The Smoking Ruin & Other Stories was written by Christopher Klug, Steve Perrin, Jeff Richard, Greg Stafford, and Jason Durall, and published by Chaosium on November 1, 2020. It is 192 pages, priced at $37.99 in hardcover and $18.99 in PDF. Get the complete details at the Chaosium website and at DriveThruRPG.

The Pegasus Plateau was written by Jason Brick, Rachael Cruz, Steffie de Vaan, Jason Durall, Helena Nash, Steve Perrin, Diana Probst, Jeff Richard, Dom Twist, and John Wick, and published by Chaosium on November 2, 2020. It is 158 pages, priced at $34.99 in hardcover and $16.99 in PDF. Pick up a copy at Chaosium or DriveThruRPG.

Two very high quality supplements; I own both in hard copy and recommend them to any and every RuneQuest GM. Your article does a great job of presenting content and strengths but one aspect I very much enjoyed was the fact that characters, locations and events that were first mentioned in Chaosium publications nearly 40 years ago are brought to vivid, vibrant life in these two supplements.

I think I see the fine hand of Steve Perrin in this; if that is indeed the case, welcome back Steve. It’s good to see your work again.

> I think I see the fine hand of Steve Perrin in this; if that is indeed the case, welcome back Steve. It’s good to see your work again.

Thanks for the kinds words on the article. Steve Perrin is listed as an author for both books; however I don’t know if that’s for recent contributions, or because his early work was the basis for several adventures.

Anyone out there know for sure?

>Anyone out there know for sure?

We were delighted to have Steve Perrin actively involved in both books as a recent contributor and creative consultant for the company.

That’s fantastic news. Thanks for confirming!