Most SF readers are familiar with Gardner Dozois’ legendary Year’s Best Science Fiction series, which ran for three and a half decades from 1984 to 2018, and helped shape modern perceptions of short SF. But it was by no means the first Year’s Best in science fiction, and in the early days, wasn’t even my favorite. No, back in the 80s I preferred the annual anthologies by Terry Carr and, more frequently, Donald A. Wollheim’s Annual World’s Best SF, which ran from 1965 until the late 80s.

I recently bought a copy of The 1989 Annual World’s Best SF, and was surprised to find it had a guest introduction by Isaac Asimov. Flipping it open, I found a sober explanation in his first paragraph.

This is the first time that the introduction to his annual volume has not been written by Don Wollheim. Alas, we are not immune to the ravages of time (not even science fiction personalities are) and Don is hospitalized just as the deadline for the volume approaches, so he has asked me to do the introduction for him.

For all my fabled immodesty, I am forced to admit I am a poor substitute. Don has been a sextuple-threat person in science fiction. Let me list his threats…

The rest of Asimov’s 4-page intro is a detailed and affectionate tribute to Wollheim, and the enormous impact he had on the field. Knowing that Wollheim passed away at the end of the decade, I was strongly suspicious he never emerged from that hospital stay. Asimov wrapped up with the hopeful lines:

Don… is a sweet and gentle fellow who has spent his whole life giving more than he has taken. I hope and trust that next year he will be writing his own introduction again.

Donald Wollheim died on November 2, 1990, at the age of 76. He did in fact emerge from the hospital, produce one more volume, The 1990 Annual World’s Best SF (with his co-editor Art Saha), and he did write the introduction. 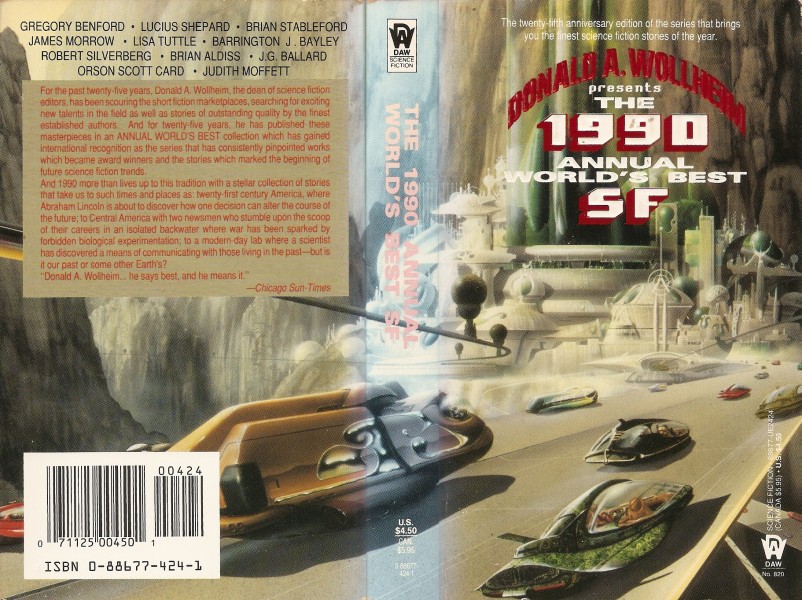 Read today, Asimov’s introduction to the 1989 volume makes a fine (if somewhat early) eulogy for Wollhiem, and a decent short history of his entire career, from his early days as a fan in the 1930s to his successful writing career, and eventually his huge accomplishments as a groundbreaking editor and publisher.

Asimov also makes a great deal of Wollheim’s work as a science fiction commentator and, especially, as an anthologist, noting correctly that he edited one of the first — and certainly most important — SF anthologies.

In 1943, he astonished the science fiction world (and flabbergasted me) by editing The Pocket Book of Science Fiction, published by Pocket Books (who else). It was the first appearance of a science fiction anthology by a mainstream publisher, the first offering of great science fiction, of the type that had appeared under Campbell’s aegis in Astounding Science Fiction, to a wider public than the magazines themselves commanded. Don was the first “apostle to the Gentiles” in science fiction, the first to point the way to general acceptance, and it was in his footsteps that later anthologists such as Groff Conklin, Raymond Healy, and Martin H. Greenberg trod. And now, 45 years after the appearance of that first anthology, you’re holding his latest anthology in your hand.

In 2021, with science fiction films and books routinely dominating the box office and topping bestseller lists, it’s not always easy to imagine a time when SF was a tiny niche market where public acceptance — let alone pubic success — seemed nothing more than a dream.

Here’s a look at the full piece (click for a bigger version). 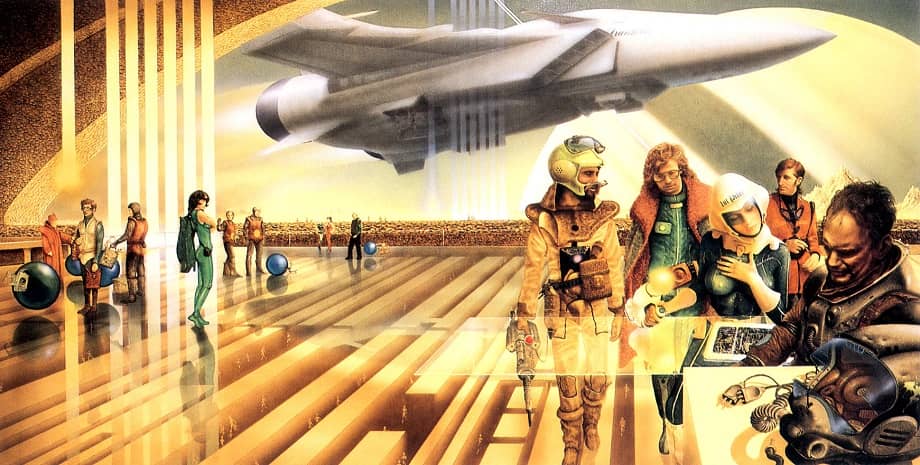 As for the anthology itself… as usual, it was packed with top notch fiction, including plenty of award contenders, including a novella by Ian Watson, the Budayeen novelette “Schrödinger’s Kitten” by George Alec Effinger (a Hugo, Nebula and Sturgeon winner), David Brin’s Hugo nominee “The Giving Plague,” Geoffrey A. Landis’s Nebula nominee and Hugo Award winner “Ripples in the Dirac Sea,” and my favorite story from 1988 (and the only one I remember today), Steven Gould’s Hugo and Nebula nominee “Peaches for Mad Molly.”

The 1989 Annual World’s Best SF was edited by Donald A. Wollheim with Arthur W. Saha and published by DAW Books in June 1989. It is 315 pages, priced at $3.95. The cover is by Jim Burns. It was reprinted in hardcover by the Science Fiction Book Club. It has been out of print for 31 years, and there is no digital version.

John, this is a treasure indeed. I have a special affection for this volume — it was one of the first SF anthologies I bought as a young adult when I was steering away from novels and discovering short fiction. I bought it new off the rack (at Waldenbooks, of course) while in college. That gorgeous cover just leapt off the shelf and demanded that I buy the book, and boy was I glad I did. Great stories cover to cover.

I loved the collection so much that I watched the bookstore shelves and promptly snapped up the 1990 volume when it appeared. I was saddened when a 1991 volume did not materialize (and when I later learned why) but proceeded to track down used copies of Wollheim’s previous “Year’s Best” and eventually had the entire set. They’re still among my favorite collections of short SF.

Anyway, a great find. Thanks as always for highlighting these gems from the past.

I hope that Mr. Wollheim’s legacy is best summarized by Dr. Asimov’s fond tribute. I fear that it will be less the yellow-spined glow of DAW Books (the primary color of sf/f in my youth) and more the scandal over his preemptive publishing of The Lord of the Rings in paperback over Prof. Tolkien’s objection.

And I would toss in a huzzah for Arthur Saha, too, another anthologist who put together the DAW Year’s Best Fantasy after Lin Carter left, along with the Year’s Best SF from 1972 to 1990.

i’d forgotten these Wolheim anthologies, and now want to hunt some up, though I fear they are quite scarce. Thank you as always, John.

> John, this is a treasure indeed. I have a special affection for this volume
> — it was one of the first SF anthologies I bought as a young adult

The first paperback anthologies I bought as a young adult (after THE HUGO WINNERS and BEFORE THE GOLDEN AGE volumes I got from the Science Fiction Book Club) were the Terry Carr YEAR’S BEST volumes, but I didn’t really care for them at the time. I found the Wollheim series a little later and, like you, enjoyed them so much I gradually collected them all.

> And I would toss in a huzzah for Arthur Saha, too, another anthologist who put together the DAW
> Year’s Best Fantasy after Lin Carter left, along with the Year’s Best SF from 1972 to 1990.

Glad to see a shout-out for Saha. I’ve heard a lot of good things, but to be truthful I can’t recall reading any of his anthologies (not even his YEAR’S BEST FANTASY, which I really should try).

i’d forgotten these Wolheim anthologies, and now want to hunt some up, though I fear they are quite scarce.

I think you’ll be surprised to find that the Wollheim anthologies are easy to find — and very inexpensive. eBay has over 200 listings, starting at $4 (including shipping).

I generally preferred Carr’s anthologies, but that 1989 Wollheim volume is quite strong.

I believe Art Saha did a lot of the heavy lifting on all of Wollheim’s anthologies from the early ’70s on.

His daughter, Heidi, became famous for her risque costuming as a young teen (mostly famously dressed as Vampirella), and her parents were even then (and more so now) criticized for, in essence, allowing rather creepy objectification of her. It was before my time in fandom (I’m a year or two younger than she, actually.) Forrest J. Ackerman, who seems to have been quite a creepy individual, apparently prepared a magazine of pictures of her, but fortunately it was pulled before distribution.

I remember the Heidi Saha affair, but somehow I never made the connection that her dad was Art Saha.

Warren magazines (the company that published Vampirella) did release “An Illustrated History Of Heidi Saha” tribute magazine. I know it was a different era, and I can understand (to an extent) two parents thinking they’re helping their pre-teen daughter fast-track a potentially lucrative modeling career but, yeah. This whole thing is an unwholesome episode in fandom, and does not reflect well on fandom in the 70s.