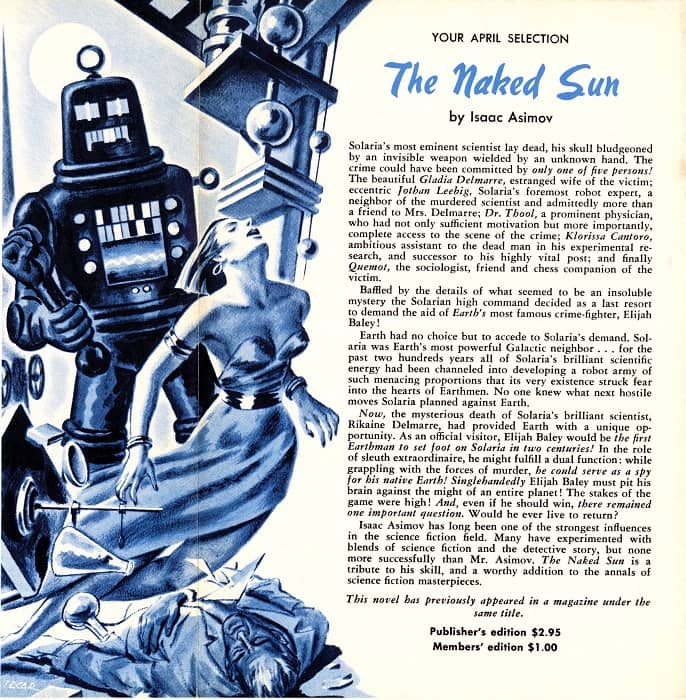 Like tens of thousands of science fiction fans before and after me, I was at one time a member of the Science Fiction Book Club (or SFBC for short). I joined just as I entered my teen years, in the fall of 1976, shortly after I discovered the wonder of science fiction digests.

I remember the bulletin of the SFBC, Things to Come, arriving in our mailbox every month, and eagerly perusing the offerings to see if I wanted grab any of the featured selections or alternates, or something from the backlist. The SFBC purchase I most vividly recall reading was the Isaac Asimov edited anthology, Before the Golden Age, which was filled with great stories as well as fascinating biographical material by Asimov on his early days as a fan. Other favorite volumes include Leigh Brackett’s The Book of Skaith, Damon Knight’s Science Fiction of the Thirties and The Futurians, Frederik Pohl’s The Early Pohl, Frank Herbert’s Dune series and Edgar Rice Burroughs’ Mars books, among many others. I remained a member through college before finally letting my membership lapse.

One of the benefits of being a member of the SFBC was receiving their bulletin, Things to Come. While the art inside sometimes just reproduced the dust jacket art, in many cases the art was created solely for the bulletin, and was not used in the book or anywhere else. Because one can never collect enough things, I gradually started collecting back issues of Things to Come for the art, particularly for the art of Virgil Finlay which began appearing in the bulletin in 1959. In 2005, I gathered those Finlay illos from the bulletins that I’d collected and published a small press booklet, Virgil Finlay: The Art of Things to Come.

The bulletin ran as a bi-monthly until the issue dated July 1969, when it changed to monthly. Nearly all of the art for the first 20 years of Things to Come is exclusive to that bulletin, and as a result hasn’t been seen by many SF fans. In this series, I’ll reproduce some of that art, chosen by virtue of the art, the story that it illustrates or the author of the story.

Science Fiction Book Club ad in the February 1953 Astounding SF: inside back cover and back covers

The earliest ad for the SFBC appears to be the one that ran on the back (and inside back) cover of the February 1953 issue of Astounding Science Fiction, which I’ll show here. A reader could select any three of six selections for only $1.00. The choices:

Sands of Mars by Arthur C. Clarke
Needle by Hal Clement
The Stars Like Dust by Asimov
Double Jeopardy by Fletcher Pratt
Takeoff by C.M. Kornbluth and
The Puppet Masters by Robert A. Heinlein

The selections available in the first bulletin, March-April 1953, were Asimov’s The Currents of Space (the March selection) and Edgar Pangborn’s West of the Sun (the April selection). Asimov’s Second Foundation became the selection for November 1953, making Asimov the only author to have two selections in the first year of the SFBC.

The first issue of the bulletin that I own is that for the SFBC’s first anniversary, March-April 1954. From that I’ve selected the art for J.T. McIntosh’s Born Leader (his second selection, following World Out of Mind from August 1953). The illo has a classic 1950’s feel, but has a problem common with much of the art in Things to Come from this period. Namely, that the artist is not identified.

For the most part, at this early time the artists used by the SFBC were not also doing digest or paperback SF art, making their identification next to impossible. The cover for the book itself was by one of the greats of the period, Richard Powers, which is also shown above for contrast.

Jumping ahead just over a year, the May-June 1955 issue finds Timeliner by Charles Eric Maine as the May selection. Although the year is 2035, the spacesuit screams the 1950’s.

The following issue has Asimov’s The Martian Way as the August 1955 selection. In each bi-monthly issue, the first month’s selection always grabbed the cover and a column of text on the second page, leaving the second month’s selection to generally get more of a double-page spread. This piece was done by one of the regulars for the SFBC during this period; an artist who signed his or her name as Tesar. I’ve not been able to dig up any info on him or her, however.

Tesar also contributes the art for Fredric Brown’s classic, Martians, Go Home, which was the October 1955 selection. In keeping with the novel, this one was presented in a more humorous vein.

Moving into 1956, the February selection finds the great Leigh Brackett present with her novel, “The Long Tomorrow.” This was the SFBC’s first selection by a female author, although an anthology edited by Judith Merrill, Beyond the Barriers of Space and Time, had been the March 1955 selection nearly a year earlier.

Another Tesar piece illustrates Frank Robinson’s The Power, which was the September 1956 selection. This was later filmed in 1968 with George Pal producing, but Frank hated the film (though he told me he was perfectly happy to cash the checks).

Many Best of the Year anthologies were selected by the SFBC, and one of those was the November 1956 selection, The Best Science Fiction Stories and Novels: 1956, edited by Ted E. Dikty. The illustration is signed Cliff, but I’ve not been able to identify the artist beyond that.

I have some vague hope that someday I’ll identify Tesar, but identifying an artist who just goes by “Cliff” will likely prove a tougher challenge.

In the same issue of Things to Come, the December 1956 selection was Heinlein’s classic Double Star. Cliff also contributed the art for this selection, as the same artist usually provided the art for both month’s selections in a bulletin.

Empire of the Atom, feature section for February 1957

One of the original “Big Three” of science fiction was A.E. van Vogt, and his Empire of the Atom was the February 1957 selection.

Inside that same issue of Things to Come, Asimov returned with the April 1957 selection, his classic The Naked Sun. Tesar’s robot bears some resemblance to Robby the Robot, who had appeared a year earlier in Forbidden Planet, but I’m sure any likeness was coincidental…

While the ads for the SFBC that appeared in the SF digests generally just depicted the jackets of the books as published, occasionally they also featured specially commissioned art that appeared in neither the book nor Things to Come. I’ll show one example of that below, with this ad showcasing The Naked Sun taken from the back cover of Astounding Science Fiction, November 1957.

SFBC ad featuring The Naked Sun (back cover for Astounding Science Fiction, November 1957)
and Strangers in the Universe (Things to Come selection for May 1957)

Clifford Simak’s collection Strangers in the Universe appeared as the May 1957 selection.

I’ll close this initial installment looking at the art of Things to Come with an illo for the July 1957 selection. Time for the Stars was another by Heinlein, and was touted as “The Best Science Fiction Novel of the Year.” Would they lie to you?

Doug’s last article for Black Gate was A Man of Science: A Study of the Readership of Analog Science Fact-Fiction.

This is terrific! I hope you scan both sides of every page of every bulletin. It’s been so many years since I received one, and I remember the thrill of choosing whether or not to get the current selection or to buy another one. Some of the art is sort of copied off the covers in a sloppy way; the Timeliner cover appears to have originally been an EMSH. But I could be wrong. Great article; I look forward to them all!

The Science Fiction Book Club was my first true introduction to SF. I joined about 1976; the selection for the first Things to Come I received was CJ Cheryh’s Brothers of Earth.

Also like Doug, my favorite selection of all time was Asimov’s Before the Golden Age, which introduced me to fiction of the pulps. I also loved The Hugo Winners, which I got when I joined.

I’ve been a member for decades. As a kid I dreamed of having a book selected by the SFBC — and that’s exactly what happened with my first novel The Robots of Gotham two years ago. A childhood dream fulfilled.

You can still join the SFBC here:

Terrific! I’m going straight on into the future to read the next two, but boy, do these bring back memories!

Forgot to say I joined in 1955, when I was 10 (my Mom wrote the checks), and my brother and I took turns picking the book(s) each time.

Being something of a fanatic about the work of Robert A. Heinlein (I have every book he ever wrote) I bought all the Heinlein books that were in the estate auction of Woody Hagadish at PulpFest a few years ago. Including but not limited to Double Star and Time for the Stars. Even though I already had them I could not resist buying them again as the ones from Woody are like brands new.