I don’t know about you, but the idea of returning to the late 70s and early 80s to read early stories from “promising young writers” like George R. R. Martin, C. J. Cherryh, Bruce Sterling, Suzy McKee Charnas, Tom Reamy, and Felix C. Gotschalk is pretty exciting. Unfortunately, while the series was artistically successful, it struggled commercially, and after just five volumes was finally killed by the collapse of Bluejay Books. (Except for an ultra-rare sixth volume that we’ll get to in a minute.)

But we still have those five volumes, and I’m sure it will come as no surprise to hear that they’re well worth a look today. The first, edited by George R.R. Martin and published in hardcover in 1977 by Macmillan, included stories by George R. R. Martin, Ruth Berman, George Alec Effinger, and Robert Thurston — plus a long novella by Lisa Tuttle and a Falkenberg’s Legion novella by Jerry Pournelle. Here’s Ben Bova, from his introduction.

Young writers know how tough it is to “be served.” An unknown writer must begin his or her career by mailing stories blindly out to publishers, knowing full well that the manuscripts will be tossed onto the publisher’s “slush pile,” to be read if and when an editor has the time to tackle them. In most cases, the person assigned to reading the slush-pile manuscripts is the lowliest employee on the editorial staff. The more valuable time of the senior editors is reserved for the older, successful, money-making writers.

Young writers have wailed since the days of clay tablets and cuneiform script that it is easier for a camel to pass through an editor’s doorway than for a new writer’s manuscript to be treated fairly. Except in certain cases… one of the most notable of those special cases was John W. Campbell, Jr…

The purpose of the Campbell Award is twofold: first, to memorialize John in a truly fitting way; and second, to honor the good new writers who enrich the science fiction field. This first volume of New Voices goes a step farther in bringing much-needed recognition to new writers. Conceived by George R.R. Martin (himself one [of] the best new writers of the seventies, and a Hugo Award winner) this anthology consists of original, previously unpublished stories by the nominees for the first Campbell Award. Each story in this volume was written expressly for this anthology by the writers who were nominated for the 1973 award.

Ironically, while the authors included have flourished in the intervening decades — becoming, in the case of Martin, the best selling author on the planet — time has been less kind to John W. Campbell Jr, and deservedly so.

Since Jeannette Ng’s Campbell Award acceptance speech in 2019, and indeed for several years before, Campbell’s hugely controversial “ideas” on race (such as his infamous Analog editorial arguing that blacks were better off under slavery), have made him less and less palatable to modern readers. Check out Rich Horton’s reasoned critique here at Black Gate, John W. Campbell was a Racist and a Loon.

Campbell’s tainted legacy aside, Martin did a fine job assembling these books, and they remain well worth a look. Here’s the TOC for Volume One.

The first volume in the series was published as a hardcover by Macmillan and reprinted in paperback a year later; the rest appeared as paperback originals, with the exception of Volume 5, which was returned to hardcover by Bluejay books in 1985. Unfortunately, no paperback edition of that final volume exists. 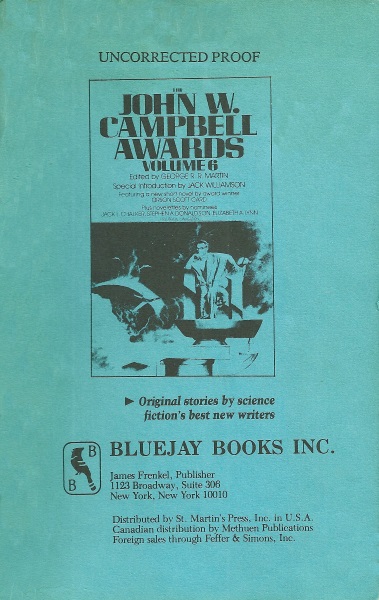 The unpublished Volume 6 of The John W. Campbell Awards

New Voices: The Campbell Award Nominees survived multiple changes in publishers — starting with Macmillan, then Jove/HBJ, then Berkley, and finally Bluejay Books — but was doomed by the collapse of James R Frenkel’s Bluejay Books in 1986. Curiously, an advance proof of the final volume — with unpublished stories by Stephen R. Donaldson, Bruce Sterling, Jack L. Chalker, Elizabeth A. Lynn, and an original novella by Orson Scott Card — was circulated to reviewers and still survivies, though in very small quantities. If you see a copy in the wild anyway, do a brother a solid and drop me a note.

All six volumes were edited by George R. R. Martin.

What?! This cheeze-doodle eating so and so is wasting time editing anthologies when he still hasn’t…oh. 1978, huh? Never mind.

LOL. Who knows…. maybe that’s when he started Game of Thrones!