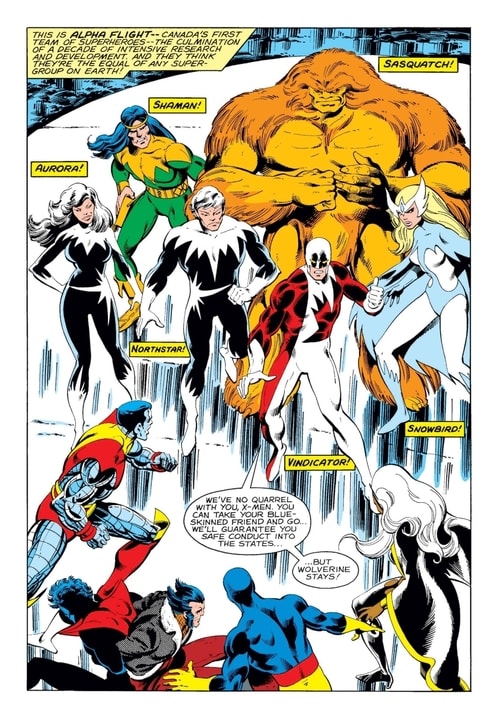 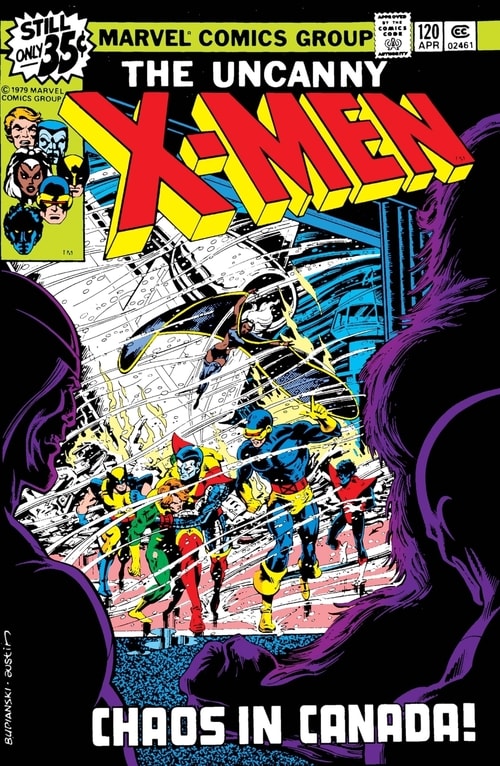 This is therefore a terrible time to get ambushed in Canada by Alpha Flight. You’ll recall that Wolverine resigned from Canadian government service in GS #1 and was attacked in issue #109 by Weapon Alpha, a Canadian government operative. Well, Prime Minister Trudeau (the father of the current one) is obviously still pissed about losing Canada’s investment (see below). 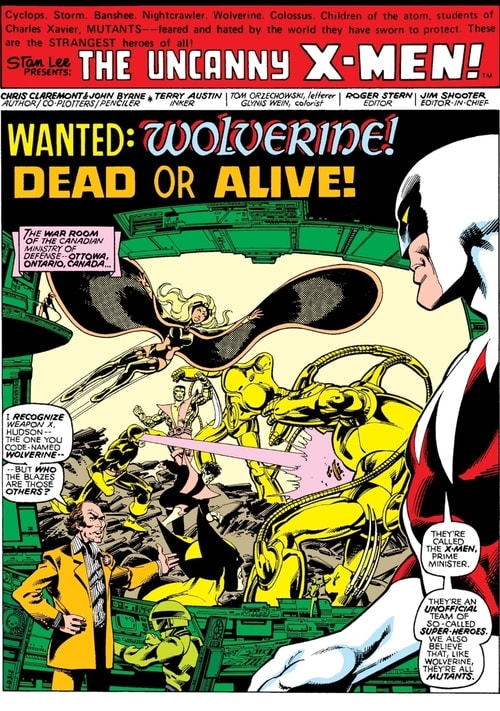 So Trudeau orders Weapon Alpha, now called Vindicator, to lead Canada’s super-powered strike team to catch Wolverine on his way back from Japan. I will also note that I love the retro feel of all of Byrne’s computers. They sometimes remind me of the aesthetic of Space 1999, and then I remember that Byrne worked at Charleton Comics before getting into the big leagues. If you’re interested in seeing John Byrne art from 1975, check out the images of his Space 1999 work on this blog post. 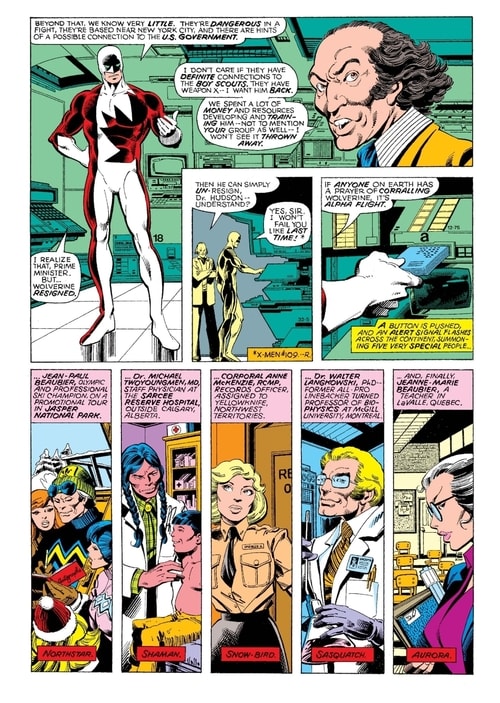 And so, the Marvel Universe and its readers are introduced to Alpha Flight, who force the X-Men’s plane to land in Calgary so they can ambush it. It’s a very fun two issues, with lots of action, brilliant art, angsty reflection, one stolen kiss (spoiler: Nightcrawler surprises Aurora), and some hard decisions for Wolverine. Vindicator gets another “Oh crap” moment (like he did in issue #109) when he’s looking for the X-Men in a mall and surprises Storm in a gift shop. He probably won’t do that again. 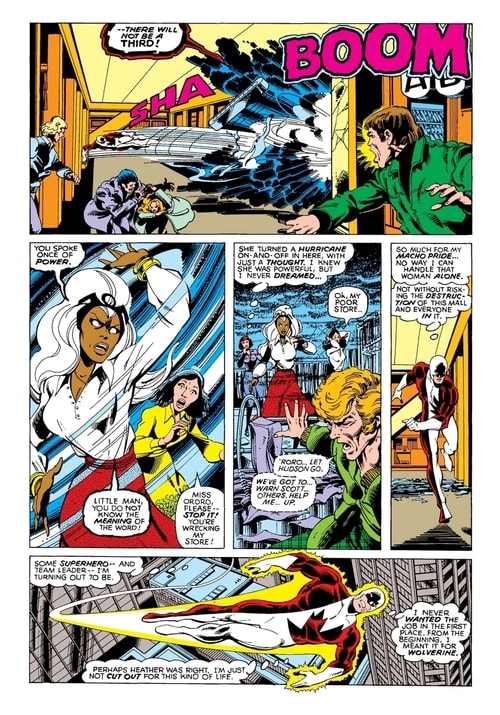 Also, I want to shout out to either Byrne or Austin who in the page below hid in what should be a newspaper an “Terry Ink This!” (middle panel). 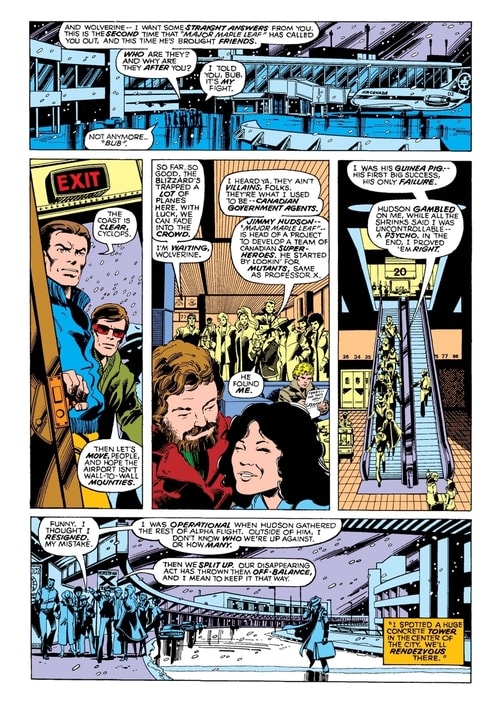 But of course, the most important thing about this story is the introduction of Alpha Flight. This is an event that will 5 years later lead to them getting their own title that would run for a hundred and thirty issues. On their creation, John Byrne had this to say in 2008:

Several members of what became Alpha Flight date back to my fan days. Guardian is chief among them, being created when I was in my early 20s as the figurehead of a whole line of “Canadian comics” I was hoping to produce. Snowbird, in very different form, was born around the same time. Shaman, originally called Chinook (he had only weather-controlling powers) came next. When I was assigned the gig of penciling UNCANNY X-MEN, Chris Claremont mentioned that Dave Cockrum had an idea that the Canadian government probably would not be too thrilled to see their multi-million dollar investment — Wolverine — head south as had so many other Canadian resources. Surely, he suggested, Ottawa would send somebody, perhaps even a team, to get him back.

This sounded like a great idea, to me, and, of course, I had just the characters to do it. We decided to start with just one, tho, the leader of the group. Since Marvel at that time was publishing GUARDIANS OF THE GALAXY the Powers that Were nixed the name Guardian, and … he was without a name for a while. Chris then tacked on “Vindicator”, which absolutely did not work for me. What does Canada need to “vindicate”? I began pushing for the restoration of Guardian, and eventually pushed that thru.

Before that happened, tho, we had our “sequel” to do, with that group of Canadians coming down to reclaim Wolverine. I dropped in the renamed (and power enhanced) Shaman and a redesigned Snowbird, and came up with Northstar and Aurora (super speed to counter Nightcrawler’s teleportation), and Sasquatch (to balance Colossus) and off we went. In the process I came up with real names and some backstory for each. But in my mind, Alpha Flight existed only as a team assembled to fight the X-Men. When Marvel asked for an Alpha series, I resisted for a long time. I just didn’t see much that could be done with them. 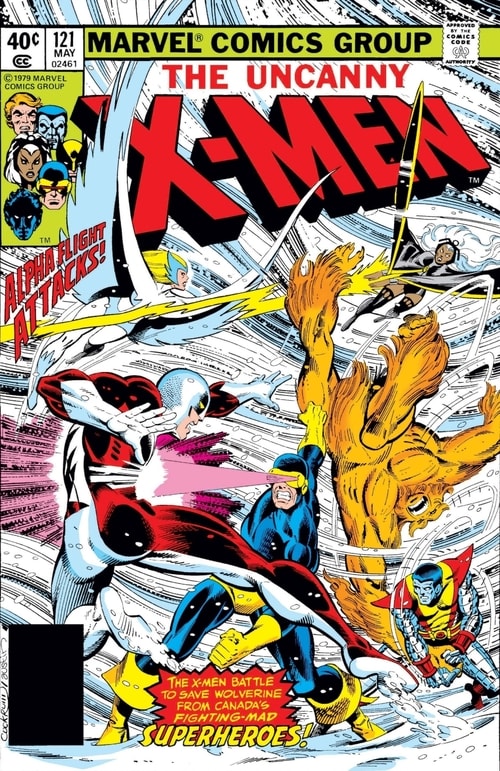 It’s unsurprising that John Byrne as a Canadian and Calgarian, and working in the Marvel style (where writers give plots and pencillers create the story for the writers to dialogue) would have co-plotting credits on this Canadian story. However, when I looked back though, and noticed that Byrne also got explicit co-plotting credit in issue #119, #117, and #114. In #112, #111, and #109. He was listed as penciller or artist and in the other issues, it’s not clear who did the plotting, but it is clear that Byrne is taking a larger chunk of the plotting work. A friend of mine (writer Stu West) recently told me that Byrne’s co-plotting is stronger than Cockrum’s. I’d never noticed before, so I’m going to try to see if I can notice during this reread. 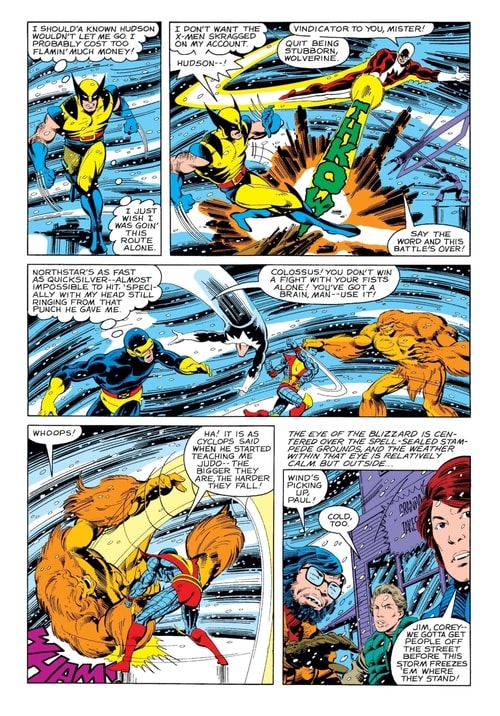 After the X-Men’s misadventures in Calgary, they make a substantive guest appearance in Power Man and Iron Fist #57. This is, of course a title that up until recently (issue #53) Claremont had been writing and so that’s the connection, because thematically, the X-Men and the Heroes for Hire don’t leap to mind as logical guest stars. 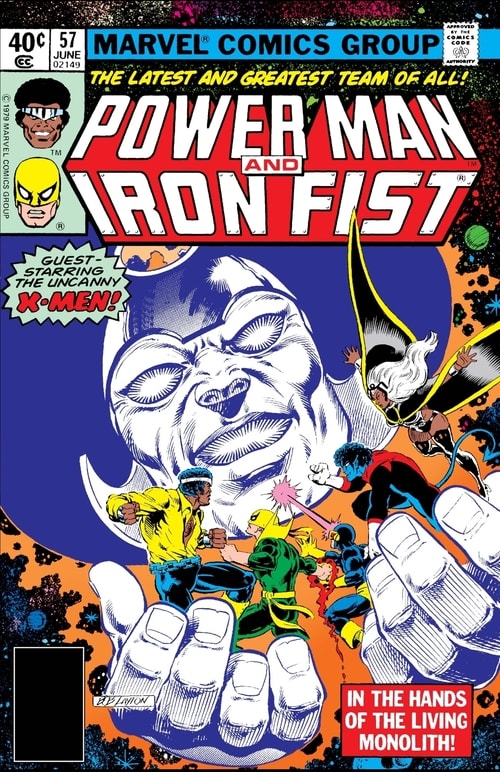 Written by Mary Jo Duffy and drawn by Trevor von Eedon and Frank Springer, I found the issue uninspired. The art is scratchy and stiff, the story implausible, the character work wooden, and the plotting unfocused. 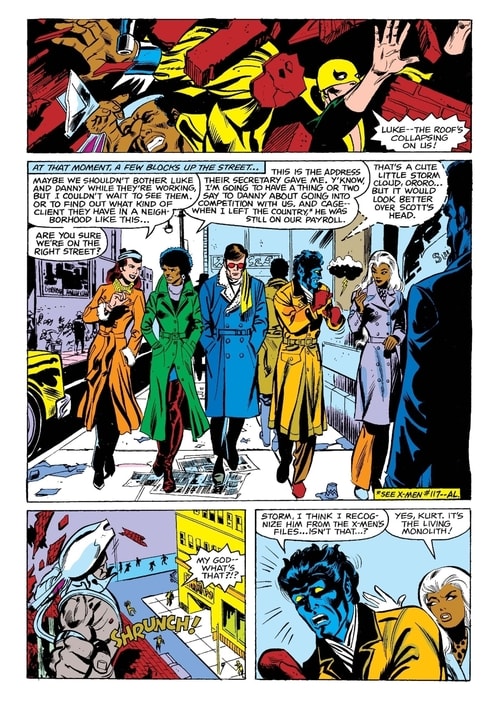 The X-Men happen to be wandering with Misty and Colleen as The Living Monolith makes an appearance with moustache-twirling plan which for some reason involves pinning a successful theft on PM and IF even though there was no need. The coincidental appearance of the X-Men doesn’t contribute to Power Man and Iron Fist putting an end to this series of events, so they really don’t add anything to this issue or to the X-Men corpus. So, yeah. You don’t need to read this issue. 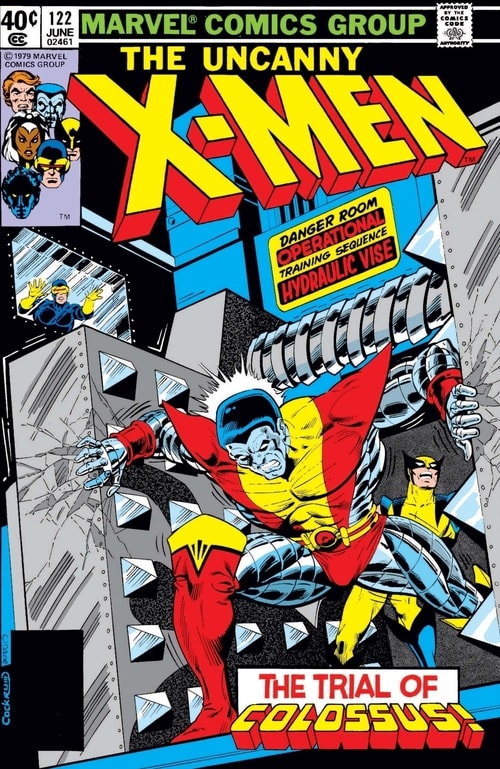 The next issue is another strong one, but not for the reasons other issues work. It’s not that some great supervillain is elevating the series or that the title is carving out new parts oft he Marvel Universe. This issue is the first issue of calm since X-Men #110 or Iron Fist #15, where it wasn’t all tights and capes, but the emotional unwinding of all they’ve gone through.

The shadow of grief hasn’t left them, but they are starting to emerge from it. Scott is seeing Colleen Wing. Wolverine visits Mariko Yoshida at the Japanese consulate. Jean is rebuilding her heart by spending time with Alex, Lorna and Moira at Muir Island in Scotland. Professor Xavier accompanies his girlfriend as she assumes the throne of the Shi’ar empire. 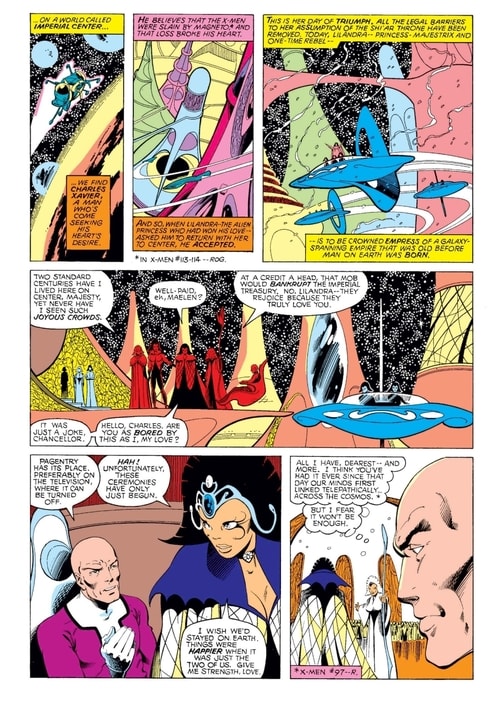 Colossus’ confidence has been taking a bruising for a while. He got taken out easily by Magneto, he was captured and needed rescuing in the Savage Land and he was only marginally useful in the fight with the Mandroids in Japan. This has turned into him not giving his best in test situations, and Wolverine gets Peter to level up by doing something empathetic and dangerous. 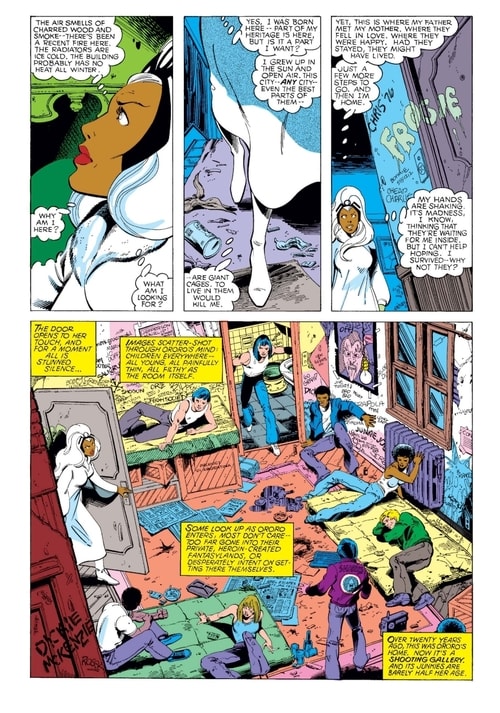 Ororo spends the time exploring her past, visiting the apartment her parents lived in when she was born. It turns out that it’s a crack house now, with a lot of Marvel staff in-jokes hidden in all the graffiti. Although Storm is a badass superhero, even she can be outmaneuvered by enough junkies with knives. Luckily Luke Cage and Misty Knight show up in time. 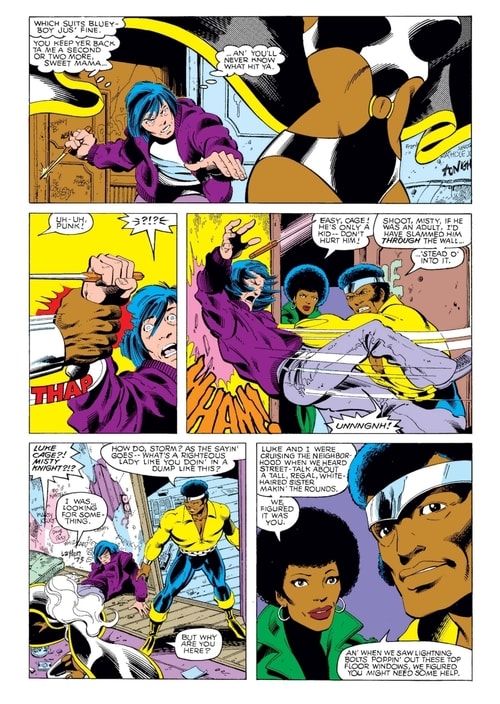 I have issue #125-#128 and I remember this journey of Ororo’s, into the slums of New York appearing prominently in letters page comments because Claremont, Byrne and Austin did something sensitive and moving in the whole issue, but especially with this part. I totally recommend this issue. It’s a great gear shift by master storytellers.

The last things I’ll note about this excellent issue is that this is the first appearance of Jason Wyngarde, an old X-Men foe whom Claremont and Byrne will turn into one of the cruelest of all their rogues’ gallery. If it weren’t for him, there would have been a lot more happy endings. So yeah. I hate him. 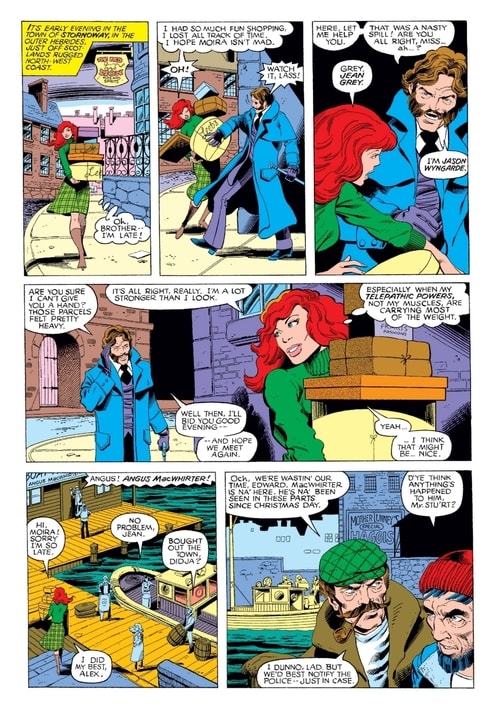 The above page also lays all the breadcrumbs (in the form of the missing Angus MacWhirter) we’ll need for the Proteus Saga which starts in just three issues.