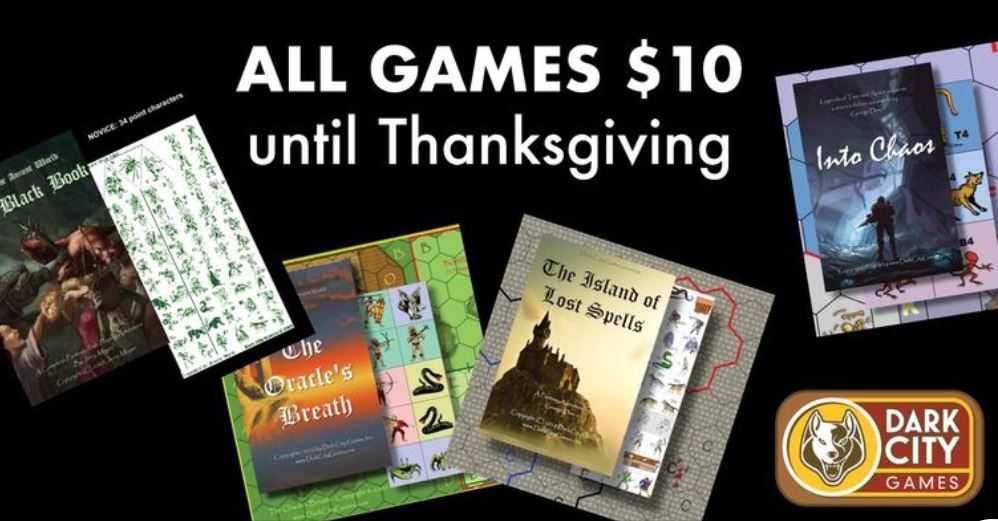 If you’ve been paying attention, you know we’re big fans of solo role playing games here at Black Gate. Whenever someone asks me for a superior modern example, I point them without hesitation to Dark City Games.

George Dew and his talented team of writers and artists at Dark City Games have been producing high quality solitaire fantasy and science fiction games for nearly two decades. They started with programmed adventures in the mold of The Fantasy Trip classics like Death Test, and soon graduated to much more sophisticated fare. Their games include ambitious fantasy epics likes The Island of Lost Spells (which I reviewed as Todd McAulty in Black Gate 10), and The Sewers of Redpoint, exciting SF fare like Void Station 57 and At Empire’s End, a line of Untamed West western adventures, and even tactical wargames set in WWII. Howard Andrew Jones took a fond look at their early catalog back in 2008, and we even published a free Dark City sample adventure titled S.O.S. in 2010.

That’s why I was so excited to see they have a Thanksgiving Sale. Every game in stock is discounted to $10. I ordered four — the SF horror title Into Chaos, dark fantasy Punisher’s Keep, Battle of the Bulge, first in their Combat Boots series of tactical wargames, and the SF mystery tale The Dark Star Incident.

Whether you’re a new gamer curious about role playing who wants to dip your toe in at your own pace, an experienced player looking for a real challenge, or just someone looking for a great bargain, Dark City has a game for you. Have a look at their catalog here, and try a game or two for just ten bucks each. And tell them Black Gate sent you!

Very tempted on this. I hope their special offer brings in many orders.

Me too. Dark City Games deserves a lot more attention.

If anyone reading this article tries out a Dark City Game, I’d love to see a review. Send to them me at john [at] blackgate.com.