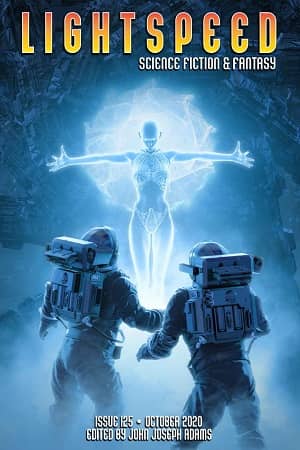 Hey hey! This is exciting — my first short story publication in many years appeared last week in Lightspeed magazine!

The story is “The Ambient Intelligence,” and it’s free to read online. It’s published under the name Todd McAulty, the name all my stories appeared under in Black Gate magazine all those years ago. Here’s what John Joseph Adams said about the story in his editorial for the October issue:

He’s not kidding about the robots. “The Ambient Intelligence” is the story of Canadian Barry Simcoe and his robot friend Zircon Border, who face off against a mysterious 60-ton killer robot hiding in a shipwreck on the shores of Lake Michigan… one that’s hiding a very big secret. It shares a setting (and two characters) with my debut novel The Robots of Gotham, but it’s not otherwise related to that book, and stands completely on its own.

Black Gate subscribers may remember (stretching back many years now) that Todd McAulty had four stories in the print magazine:

Read “The Ambient Intelligence” in its entirety here. And if you enjoy it, why not help support Lightspeed with a subscription? Six-months subs will run you just $17.94, for more than 50 stories — a whopping 350,000 words of fiction. It’s one of the true bargains in the fields. And thanks for your support!

Excellent, and congrats on the publication. I (along with, I’m sure, many others here) look forward to reading it.

Thanks Librarius! I don’t have much time to write these days, so it’s a pleasure to still find an audience when I do.

Congrats, John! Hope to see another of “Todd’s” novels published too! Rock on.

Thanks John. What’s next in the pipeline for you?

Congratulations on another publication Mr. ONeill. Well done and looking forward to reading it.

I bought your book THE HARSH SUNS a while back. Are you still writing short fiction? What’s the latest?

When can we expect The Ghost of Navy Pier to be released. I’ve read Robots of Gotham 3 times. I can’t get enough of Barry, Black Winter and Sergei.

Enjoyed the ambient intelligence as well. I can feel another few short stories/novels on the way expanding on this new development.

Can’t wait to find out what happened to the colony in the tunnels. Yet alone see what comes of Armitage and Primrose.

Eager to find out more of what’s on that drive. What dutchess is up to and if Jarcanda is 1/2 Robot 1/2 human. Can Jarcanda really be Vega? I can’t get enough. My imagination is running wild!!!!

When will the Ghost of Navy Pier be released?