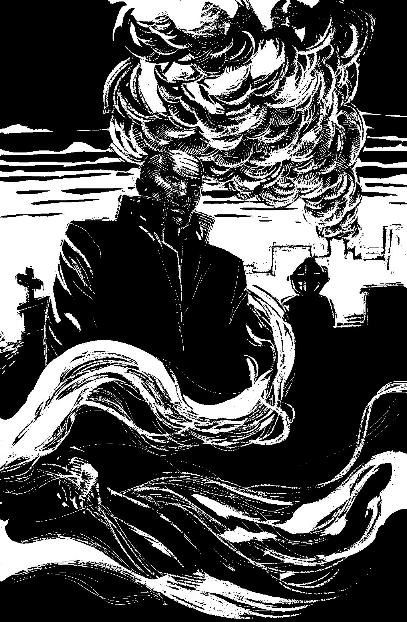 Billings Hedrick, Robotics Lord of the north suburbs, was only in the city for six hours. But he’d been a cancer to my operations for a long time. It took nearly four weeks to push through the paperwork on his demise, and three more to orchestrate a suitably theatrical exit for a corporate sovereign, but it promised to be worth it. I sent van Goetz and Newcollins to oversee the fireworks personally — high yield compression bombs for color, and fragmentation grenades just to prove my sincerity. 1820 hours, in the Grand Pavilion of the Place de la Suisse. More of a spectacle than Billings warranted, but my public demanded certain standards.

By 1950 hours, with the anointed hour long gone and the soft tinkle of champagne glasses in the Pavilion still uninterrupted, matters tumbled relentlessly into my own hands. At some personal risk I took the old tunnels under the core of the city, past the crumbling spider lairs to the sub-basement of the Place de la Suisse. I was in a dark mood.

A thin crowd swirled in the lobby of that great old hotel, many dressed for what looked like a masquerade. Two young beauties, clad in tightly bodiced evening gowns and holding delicate masques to their faces, glanced in my direction and exchanged nervous whispers. It appears I had been spotted, at the future scene of the crime. How inelegant.

Van Goetz was waiting for me quietly in the shadows of one of the great granite columns. “You are seconds away from a new career as a pillar of fire,” I said coldly.

He nodded without changing expression, passing me a thin slip of metal. I turned it over. “What is this?”

“What’s special about room 1752?” I asked as we made our way to the elevators.

“It was supposed to be empty. Newcollins reserved it as a staging area last night. The packages were in place on twenty-four, and we had everything rigged. Remote detonators, the hidden speakers, the works. Then we opened 1752.”

Van Goetz sealed the elevator and met my gaze. “You won’t like it.”

I did two circuits of the room, and even then I wasn’t sure I’d counted them precisely. I joined van Goetz in the hall. He was leaning against the wall, steadfastly avoiding looking back through the door.

“How many?” I asked after a moment.

“Who rented the room?”

“No one. According to the hotel registry, it’s been unoccupied for over a week.”

I shook my head. None of the bodies in room 1752 was more than a few days old. “Where’s Newcollins?”

“Getting a copy of the registry, and employee records. Who’s been in, who’s been out, who’s unaccounted for. Last few days.”

“I know.” Thousands, more than likely. The Suisse was smack in the middle of oldtown, hangout for the rich and pretenders alike. It was a draw for players and staff both, as well as drones of all kinds.

I glanced back through the door. This time I tried to avoid the small still forms on the floor, taking in the minor details instead: the furniture, the paintings, the way the setting sun lanced through the east windows. Too much detail, too little time.

“Okay,” I said at last. “I want a complete work-up. Dust, blood, prints, the works. I want to know the name and address of every microbe that’s set foot in that room in the last seven days. Take care of it personally.”

Van Goetz nodded. “Then what?”

He managed to look startled. “What?”

“You heard me. I want the Suisse to be visible for ten miles in every direction in three hours.”

“We’ll never… it’ll be impossible to cover our tracks. Not in three hours.”

“Then don’t bother. We had a spectacle scheduled for tonight. I’m sure some of the papers have wind of it by now. Let’s give them something to write about.”

Van Goetz followed me back towards the elevators. “Sam, there are probably hundreds of players staying here tonight. And half a dozen corporations have suites in this building. Evermat Chemical, La Diabla…”

“I know. Let me worry about that. You’ve got three hours. Can you do it?”

It was an unrealistic deadline, but van Goetz isn’t my Director of Entertainment Operations for nothing. Less than four hours later, the Place de la Suisse was a vertical bonfire. Serious efforts to fight the blaze were abandoned when the water mains were ruptured on the third floor by a compression bomb.

Chemical evidence wouldn’t be hard to find, but none of the city dailies bothered to wait for that. Long before the flames had subsided, an overused graphic of my features — a rather tasteless silhouette of a stooped figure with a thin, deformed hand — graced the front page of three of the major morning papers. The headline for the Monitor was “Mysterious Blaze linked to Subterranean Crime Lord,” the best copy I’d had in months.

All in all, far more hue and cry than could possibly have come from the assassination of Billings Hedrick, no matter how well executed. Most of the major realworld newsgroups picked it up, and two national entertainment syndicates followed the story, commenting on the unusual daring and mystery of it all.

Perhaps it is true what they say about fame. It only truly comes to those who’ve lost the taste for it.

Shortly before midnight that evening, I left oldtown and took a private cab to Cold Harbour cemetery. It was the oldest in the city, and by far the most exclusive. Most of the city founders had mausoleums here, including Isaac Carleton, and they said Baron LeMaul had been entombed here, before his escape.

I took the shortest route possible to the Tomb of the Unknown Prince. John the Goat had picked the location, another bad joke. Midnight had become a dangerous time to be in a cemetery since the Lord Mayor had cracked the Book of the Dead. Ghosts didn’t bother me, but the things that came to feed on them did.

I stood waiting for several minutes in the darkness, cold fog coiling around the tombstones and lapping at my feet. A thin tendril of green mist groped blindly towards me, shying away at the edges of my robe. It snaked away to find easier prey, or perhaps a cold trench to bed down and digest a meal. To the west I heard faint chanting and a symphony of bones — a ghoul clan, or a midnight induction ceremony for some secret society. Bunch of wide-eyed newbies, pledging mumbled allegiance to a handful of their more experienced brothers. Bless ’em, one and all. Go forth and multiply.

John arrived a few minutes later, materializing out of the mist with startling abruptness and genuine style.

“Sammy,” he said warmly. “You’re looking good, man. Very creepy.” He gestured at my skeletal hands, nearly engulfed by the heavy fabric of my robe. “Killer look. You should get out and mingle more. Do you some good.”

“John.” I greeted him with a nod, ignoring his jabs at my appearance. John himself was mostly shadow, all cloak and fog. It was said in some quarters that he maintained nearly a dozen registered identities in virtually every walk of life in the city, from corporate sovereign to street runner. I doubted that was true, but didn’t probe too deeply. In cases like this the truth was usually a letdown.

“Ah. The usual.” He looked disappointed, gazing out over the graveyard at the looming bulk of Cold Harbour Asylum, a sprawling and toothy structure that squatted at the summit of the harbor’s only hill. “What is it this time? Another personality virus? Some new billing hack picking your pocket?”

“It’s always serious with you these days, Sammy. Had such high hopes for you, man. The Unknown Prince, re-instated in the halls of power… one of the greatest players this city ever saw, and now look at you. They give you a paycheck, and suddenly you get a stiff neck.”

He looked startled. Doubtless he thought his real name was more secure than that. Rajiv Bhutal, aka John the Goat, London UK registered player since spring of ’44. It was my business to know my players, and I was good at my job.

“What’s this about?” he asked.

My mouth twitched. “You could say that. What do you know?”

“Not much. If you want the honest truth, Sammy…”

“I kinda assumed it was you.”

“Okay, if you say so. Nobody really knows anything, at least not about any actual killings. Just speculation mostly, a little bandwidth in the chat logs when some fosters went missing. You should check the Hotel Calamity though, just in case.”

“Is there a bounty or anything on this? Should I spread the word?”

“No. You should keep your mouth shut. You hear anything, you bring it to me. Understood?”

He seemed anxious to leave all of a sudden. “What?”

“You hear about something like this again and you don’t bring it to me immediately, I’ll toss you out of the game.”

“I’ll put your ass in the ground personally. Am I clear?”

Silence. John the Goat had killed three sovereign-class players in his career, two of them uncredited, and all of them solo. He wasn’t the kind of guy to wait on paperwork. I kept my hands in the open, and the mist sniffed at our heels expectantly.

“Sure,” he said after a moment. “I understand, Sammy.”

I turned and headed towards the docks, leaving him there among the giggled chants of the newly risen ghouls, and the first cries of the ghosts as they fled across that cold hunting ground.

The complete version of “The Haunting of Cold Harbour” appears in Black Gate 3.