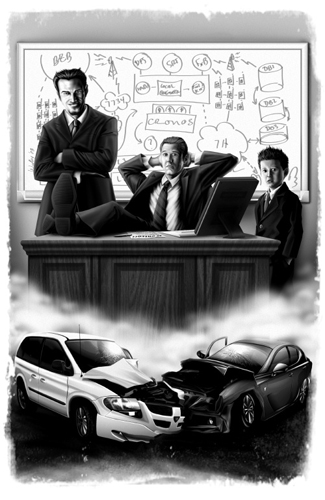 “You’re late,” Leif said as I climbed out of the car.

Hearing your boss tell you you’re late is rarely the best way to start your workday. “I know,” I said, casting about for an excuse. “Damn near took out a minivan in downtown Libertyville. Some mother yelling at 300 kids in the back seat cut me off at an intersection.”

“Fine. Scared the hell outta her, though. She drove off the road, and came within twelve inches of plowing her minivan through the window of a restaurant. Brought traffic to a complete stop for thirty minutes. I had to stick around until the cops showed up.”

“You didn’t scratch your new Lexus?” A note of genuine concern crept into Leif’s voice.

“No, but thanks for asking.” I popped the trunk and grabbed my briefcase, adjusting the volume on my Bluetooth headset. “What’d I miss?”

My case had come open, and papers had spilled across the trunk. I grabbed them as quickly as I could. “How mad was he?”

“I’ve seen worse. But it wasn’t pretty. Think he played it up a bit because Mike was in the room.”

I stopped grabbing papers. “Mike’s in the meeting?”

“He was. His big powow in Redmond got postponed, or canceled, or God knows what. So he shows up unannounced at Crip’s quarterly review, just to make sure everyone is crystal clear on how serious the corporation’s budget crisis is.”

I swore softly, slamming the trunk and starting the long walk across the parking lot towards Door 10. The lot was packed today; the Libertyville facility employed nearly 3,000 people, and it looked like they’d all shown up before me.

“Should I ask how that went?” I asked.

“Mike wove a tapestry of obscenities that’s still floating over downtown Chicago. Word is the corporation will pre-announce that we’ll miss our numbers for the quarter. You know what that will do to the stock. Travel and all discretionary spending are on hold. The pressure from the tower to cut costs is as high as I’ve ever seen it.”

“I got to watch Mike tear a six-inch strip of skin off Crip for missing his revenue forecast. That made a change of pace, anyway.”

“Enjoy it while you can,” I suggested. “You know that’s gonna roll downhill.”

“Believe me, I know. Everyone in the room knew.”

“Just that he wants his money. Says he funded Crip’s division three years ago with the promise of sixty million in revenue by the end of this year.”

I winced. Last time I’d seen Doug Cripen’s forecast, it predicted his division would make barely thirty. Which meant we were thirty million dollars light — and that’s if we made forecast, which frankly would take a miracle. Mike was the Corporate VP who ran the whole business sector; he reported to the CEO, and was Crip’s boss. Mike wasn’t known for his patience. Or for making idle threats, either.

“Mike wants a plan,” I guessed.

“Mike wants a plan. This week. He wants to see, in excruciating detail, precisely how we make sixty by the end of December. Which, last time I checked, was less than six months away.”

“Funny you should say that. Mike’s standing in front of a packed room when he says this. Room full of smart guys. Know how many told him he was full of crap?”

“Crip says Cronos has to deliver twelve million this year.”

“Mother of God.” Cronos was still a fledgling business; hardly out of the research stage. We’d brought in barely three million dollars in revenue last year. Since we’d closed the ConnectAll deal, our forecast for this year had jumped to five. A nice bump, but a very long way from twelve. We were healthy, growing quickly, and had a bright future. If we could just survive being strangled to death by an insane parent corporation.

“We got off easy,” Leif said. “Lauren’s team signed up for fifteen. And the poor bastards in International OEM have to deliver twenty.”

‘Poor bastards’ was right. Ken and his guys in International would be lucky to see five. “He can’t be serious,” I said.

“Crip spent the last hour of the meeting explaining precisely how serious he was. There was blood on the floor. Our jobs are on the line, Christopher.”

“When are they not?” I said, trying to sound light-hearted. But it was an effort. “What do you think — any chance I can land a new job with IBM in six months?”

“Not if I get there first.”

I flashed my badge at the security guard at the door, and lifted my case up for him to poke through. He gave a lazy glance and waved me though. “What do you think will happen if we miss twelve million?” I asked Leif.

“Well, the really good news is we have plenty of things to worry about long before that. That’s six months away. Mike made it clear he’ll cut Crip’s budget if he doesn’t like the plan we show him this week. We have to survive that first.”

“The budget cut? Mike threw around a lot of numbers. My guess, forty percent.”

“Uh-huh. Unless we convince Mike we’ll bring in twelve million — which between you and me, will take a web of lies of monumental proportions — you and I are going to have to make some tough headcount choices in the next thirty days. And that’s if we survive at all.”

“Aren’t you a ray of sunshine.”

“How many salesmen you got working for you now, Chris?”

This was a rhetorical question, meant to shut me up. But to give me time to think, I answered it anyway. “Six, counting that dickless loser you saddled me with.”

“Unless you’re anxious to walk three of them to the door, we need a Plan. A Sales Plan that’s a true work of art. Something so beautiful it’ll make Crip a believer, and give Mike a hard on.”

The thought of laying off half my staff made me sick to my stomach. Threats to my own job held little terror any more – I’d been in sales for nearly two decades, and faced that particular specter more times than I could count. But I’d hand-picked most of my people, and blown sunshine up a lot of skirts to lure them here. They were the best team I’d ever worked with and, more importantly, they’d put their faith in Cronos.

And in me. Even dickless Troy, whom Leif had parked in my sales team while he prepared a real job for him, and who couldn’t sell Perrier to a Bedouin.

“I’ve given this project five years of my life, Chris. I’ve had five bosses since it started, two of them incompetent, and three who’ve tried to kill it. Cronos is the finest technology to come out of this company in nearly a decade, and we need just one more year to prove it. I’m not going to let it be killed when we’re this close. Not because some idiots in the corporate tower want to improve our bottom line a quarter-cent a share.”

I adjusted the volume on my earpiece as I entered the engineering bay. Half the people I passed in the hall were talking on their cell phones, and it was harder to hear Leif. “Why not?”

“We’re essentially done here, and I need you to take my place in the Unified meeting. Crip’s doing some one-on-one meetings with everyone who reports to him, and when my turn comes I want to see if I can staunch the blood loss a little.”

“Good luck with that.” Doug Cripen was boss number five for Leif. Leif had worked for him for less than a year, since the Cronos team had been moved into Crip’s division in the last re-organization. They didn’t get along.

“Thanks. Teddy told me this morning the Unified deal is almost dead. Time to work your magic.”

Unified was the company providing the back-end server for the Cronos service; without it Cronos didn’t have any kind of story, much less one Mike would believe.

A man in his early thirties was emerging from the crowd ahead as I hurried down the hall. I was still in the engineering bay, but this guy wasn’t an engineer. His dark green suit fit him perfectly, and his shoes cost as much as many engineers made in a week. His mouth widened in a broad smile as he saw me, and he stretched out his hand. The guy was obviously a salesman, and I liked him immediately.

“Yes? Hang on a sec,” I told Leif. I shook his hand, but continued walking. “I’m sorry…have we met?”

“No,” he said, moving smoothly to follow. “But I understand you’re the lead negotiator for the Sector.”

“No, no,” I said quickly, wishing Leif hadn’t overheard that. “Nothing like that. Just for the Cronos team.”

That stopped me. I’d gotten used to people talking about my father when I graduated. But that had been twenty years ago; no one knew who he was anymore. “You knew my father?”

“Indeed. I know him well. Do you have a few minutes?”

“Actually, no.” I started backing away. “I’m running to a meeting. But I’d be glad to make some time for you this afternoon…” I looked him over for an ID badge or visitor’s tag with a name, but saw nothing.

“Parker,” he said, slowing his steps. “Parker Catelli. That would be splendid.”

“I know where it is. I’ll see you shortly.” He stood quietly, hands clasped and smiling, watching me recede down the hall.

“Who was that?” Asked Leif.

“Dunno. Probably some guy looking for a job. Didn’t have a badge.”

“Dunno. Security’s gonna cram stuff up his butt until they find out if they stumble across him, though.”

“So you’re lead negotiator for the whole sector, now?”

I grimaced. “I don’t know where he heard that.”

“What is it you tell people when you’re out looking for a job, anyway? Why not just tell them you’re CEO?”

“What makes you think I don’t?”

“I forgot you had a famous father, too. Didn’t he do all the early negotiations with Honeywell in the 70s? I hear most of the Networks business is still based on that technology. So this guy knows your dad?”

“Because my dad’s dead.”

The complete version of “The Soldiers of Serenity” appears in Black Gate 12.