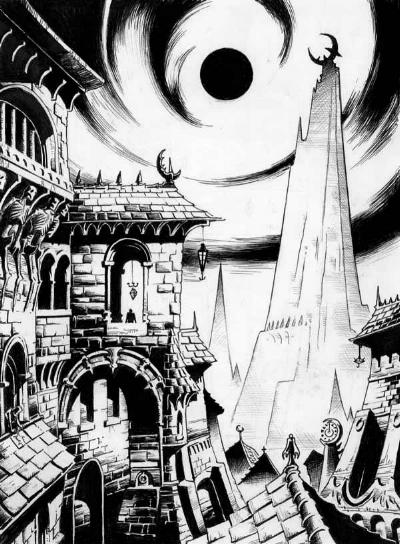 In the beginning was the Void. And in the Void, God created heaven and earth. The earth was without form, and darkness was upon the face of the deep. And God said, let there be light, and there was light. God saw the light and saw that it was good.

At the boundless perimeter of the Void, the appearance of light created an Absence. An Absence of light, of the art of Creation, and the attention and favor of God. And the Absence grew more profound, and took shape and form, and became unto itself, infinite and cold.

As God poured his grace and love into the Creation of earth, bringing forth a multitude of creatures that walked and swam and soared, so too did things take shape in the Absence. Things that crawled, and writhed, and were as far from the ideal and shape of Creation as the void that separated them.

And so it was in the beginning, and is now, and shall be. Forever.

On a cold and forgotten arm of Tartarus, a great thrust of dark rock far from the fiery heart of that industrious realm, Kevin Guilder stole a bowl of water and began an unintended journey.

He had not thought to steal the water, not at first. He took the low pass through the Xiaomantong hills, fleeing the last of the unrecognizable things that had chased him across the twisted salt flats. Twice they nearly caught him in the darkness, before he climbed high enough to pick his way by the distant flares of the soul furnace.

As he rested in a thin crevice Kevin witnessed a bloody fight between two hill clansmen, savage creatures not so much men as ferocious stalks of bone and muscle. Before they began one of them gently set down the object of their loud dispute, and as he did a fine spray of liquid sloshed over one side.

Is that water? thought Kevin, and his mouth ached with thirst. It had been a very long time since he had drunk anything — at least anything not drawn from the festering river that ran through Arnoche. Time is not measured in Tartarus as you and I would understand it, which is to say it is not truly measured at all.

The clansman began their battle in earnest. It was thunderous and brutal, a slow ballet of flying blood and bone, and when they had pounded each other far enough down the scree of rock Kevin emerged from his crevice, quietly lifted the basin, and continued climbing.

It was indeed full of water. The liquid was unexpectedly cool, and he could not remember when anything had felt so good, so invigorating. But there was too much to drink all at once, and he could not carry the basin far. He briefly considered pouring it off a cliff, listening to the brief music as it hissed and steamed on the rocks of the spinward face, but that seemed wasteful, so in the end he went a little out of his way to mount to the summit of Xiaomantong, and bring the water to Karzhai the Liar.

Karzhai had been pinned to the summit since well before the ascension of Asmogar, more than three thousand revolutions of the great furnace ago. It was said that he saw everything in the lowlands with crystal clarity, that in ages past the brave and foolish had risked the perils of the hills to barter for his wisdom, and that he told only lies. Karzhai was out of his crevice and wrapped in his chains asleep when Kevin reached the hilltop, a little out of breath. So Kevin placed the basin carefully at his feet, his sleeves wet from spills during the long climb, and turned to go.

The far side of the small plateau looked out over the pocket of Arnoche, a frothy bubble in an infinite ocean of soot and rock, nestled below a restless ceiling of ancient smoke. Partially sheltered here from the glow of the distant furnace, Arnoche was a shadowy labyrinth etched into the stone, the tiny flicker of its street lamps and the lazy revolutions of the coal bats the only motion he could detect. Built on the ruins of an abandoned ghoul enclave, the city had no recognizable architecture, no pattern the human eye could resolve, nothing perhaps but the sense of a purposeful burial, the atmosphere of a broken tomb or a great and secret graveyard.

“What’s this?” Kevin heard behind him, just as he began to pick his way over the rocks. He looked back to see Karzhai sitting up, his thin white beard tangled with the rattling chains at his waist.

Karzhai dragged the back of his hand across his mouth. “You bring an offering, seeking to trade for knowledge?” he said after a moment.

“You know what? No,” Kevin answered, scanning the descent for a route that stayed clear of the deepest shadows. “It’s all yours. Free basin, too.”

He heard a scrape as the container was dragged and then lifted. “It is water,” Karzhai whispered. Kevin hardly noticed, caught up in planning what was looking more and more like a very treacherous descent. There was a single fairly obvious route — perhaps too obvious. He was certain he’d seen movement just off the path a third of the way down, a multi-limbed shadow that had slithered quickly into the darkness when he came into view.

“Oh Lord,” he heard behind him. “Oh sweet Creator.”

Kevin smiled. “I know what you mean.”

Karzhai finished drinking with a great gasp, letting the basin roll away with a clang. “No one… no one has brought me water in a long time,” he said. “Don’t go that way.”

“You’ll get halfway down before they block the path with webs. They’ll hunt you for hours before they finally sting you enough to bring you down. It’s a trap.”

Kevin stepped back from the ledge, a little abruptly. Glancing quickly, he did see faint white wisps clinging to some of the rocks. He licked his lips. “How do I get down?”

“Back the way you came. Not far down the track is a crevice on the left. Follow it to the steepest face of the hill. You can slide down the scree, if you’re careful. Do it quickly.”

“I haven’t had a drink in a very long time.”

There was a dry rattle from the cliff face, the sound of something disappointed and hungry. It sounded close. Kevin quickly moved back the way he had come.

“I want to tell you something,” Karzhai rasped. His eyes were closed, his legs stretched out over the rock, and he seemed in the grip of rapture. “Something I’ve never told anyone.”

“Don’t knock yourself out,” said Kevin. “It’s no biggie.”

The rattle was nearer now. Kevin glanced nervously at the lip of the plateau. “Karzhai, you need to get back into your little crevice. Hurry.”

“Okay, sure. But hunker down, I mean it. Your little friends are coming — ”

“Listen to me, you little shit.” Karzhai’s eyes were suddenly wide, and he grasped Kevin’s shoulder with surprising strength. “I’ve never told anyone this, you hear me?”

Kevin tried to pull away and Karzhai’s grip strengthened, drawing him in closer. “There’s a way out,” he whispered.

“Out?” said Kevin, keeping his eyes on the rocky precipice. “Out of where?”

“If you can reach the Mounds of Eternity.”

“It’s the last chance for the faithful. God’s final net to catch the sinner.”

A rock tumbled away at the lip of the plateau. Something dark and huge, far larger then he’d imagined, slowly reached a segmented leg up over the edge.

“The first ten thousand souls to reach the Mounds of Eternity and claim repentance will be granted amnesty, and permission to enter the Kingdom of God. Do you hear me?”

He shoved Karzhai into his tiny hole, then turned and sprinted without looking back. There was the scrabble of rock, an angry hiss and the sound of something wet dripping on stone, and then he was down the path and into the crevice, on his way home.

The complete version of “Amnesty” appears in Black Gate 7.