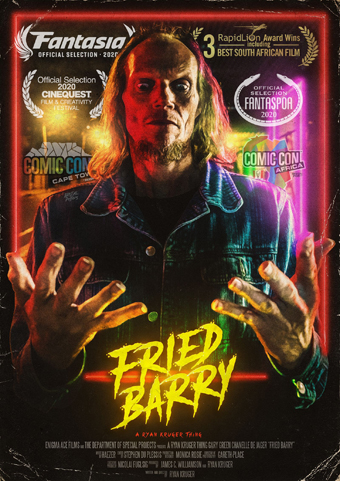 My final film of Fantasia 2020 promised to be weird, and therefore the perfect way to wind down the festival. It was a take on a particular sub-genre of science fiction film: the alien visitor walking among us. The Day The Earth Stood Still, The Man Who Fell to Earth, Starman, E.T., technically I suppose Superman — all stories about a lone extraterrestrial on Earth dealing with humans. It’s a story form that lends itself to reflection on what it means to be human. But just because a form points in a certain direction doesn’t mean every instance of that form will be concerned with grand themes.

Consider Fried Barry, the debut feature from Ryan Kruger. It follows Barry (Gary Green), an abusive drug dealer in Cape Town who’s abducted by aliens and has an inhuman intelligence planted into his body. Returned to Earth, the alien in Barry’s form wanders about learning of human ways. These ways include, in no particular order, drug use, prostitution, sex, violence, fatherhood, and stranger things.

And that’s more or less the movie. There isn’t much plot beyond loose connections from one escapade to the next. Barry, or the alien inhabiting Barry, doesn’t develop much — the alien’s not established as a character to start with, so it’s impossible to see how the creature changes through the course of the story. Supporting human characters, notably Barry’s wife Suz (Chanelle de Jager) get to develop a little but not really enough to give the tale any kind of centre.

For better or worse, this is a picaresque journey through the bad side of town and of humanity. It’s entertaining, as far as that goes, and unpredictable. There’s a convincing grittiness to the city Barry-the-alien explores, not so much a realism as a reality consistently distorted yet recognisable. The underbelly of Cape Town is believable, at least for the sake of the film, in part because it’s inhabited by cartoons. This is a story about a hapless and mute protagonist falling into one damn thing after another, and not obviously learning from it; so the quality of the scrapes the alien gets into is key to the story, and in that respect the movie doesn’t disappoint. It may or may not be enough for any given viewer, but it’s a film that has its own specific wavelength and will reward viewers tuned into that frequency.

I suspect there are good reasons why the film’s built the way it is. To start with, while Gary Green’s expressive and rubber-faced and a distinctive visual presence, he’s not a formally trained actor. He’s a long-time extra in South African films (so I have learned from an excellent question-and-answer panel with Kruger and producer James C. Williamson), and in 2017 was cast in a short film Kruger was making about a heroin addict freaking out after a hit. That 3-minute piece was titled “Fried Barry,” and drew such a strong reaction Kruger decided to expand it into a feature, designing a story around Green’s presence. 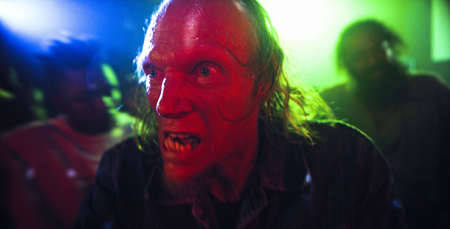 Rather than develop a detailed script, Kruger came up with a list of scenes and then workshopped the scenes with his cast. That creative process is unlikely to produce a tightly-structured result, but the looser, episodic feel Kruger achieved fits the concept of the film. There are enough ideas weaving through the movie to bind it together, however haphazardly. There isn’t much of a sense of a dramatic arc or rising action, except perhaps in the sense that the set-pieces grow a bit more expansive as the movie goes on, but there are a couple of recurring characters and something resembling a conclusion that caps off the action.

It’s not the strongest conclusion, but it does give a reasonably satisfying ending. Structurally the movie works, probably in large part because it keeps up a relentless pace — just varied enough to be interesting, it throws Barry from one sequence to another without giving you time to think about how unlikely all this is. Which is exactly right for a movie of this sort.

Kruger manages this in part by relying on visual storytelling over expository dialogue. Mostly this works, though the sequence in the alien spaceship is opaque — if you don’t understand what the aliens are doing beforehand, I doubt it’ll be obvious merely from what’s on the screen. But the imagery’s effective, giving us many different angles of Cape Town and making it feel really like a character in itself. A grimy, nasty character, fitting in perfectly with the rest of the film. 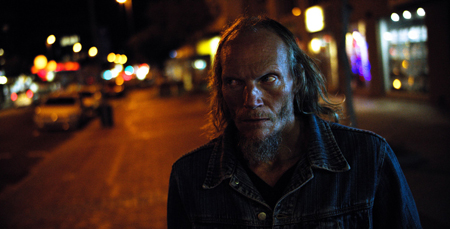 There is a sense in which this film resists interpretation. Is there irony in the fact that Barry’s a better man as an alien than he was as a human? Is this a statement on humanity’s inhumanity? Well, maybe. But maybe it is just what it looks like: a shaggy-alien story, a tale told for the exuberance of telling a story, stuffed with all the oddball inspiration and gutter visuals the creators could think of. I note that despite the drug use it’s difficult to see a way the movie could be framed as Barry’s hallucination, or at least difficult to think of a way that framing it so would give the story more depth or meaning. It is pretty much the thing it is — not so much superficial as perhaps dreamlike.

On that level, it’s a success, I think. Here is an anecdote: as the credits rolled I remember thinking that the film lacked a little in pure weirdness, that there was a level of strangeness it hadn’t reached. But then, it being just midnight, and me having gotten used over the last couple weeks to staying up to dawn watching movies, I decided to watch something on Netflix and found Ready Player One was leaving Netflix Canada in three hours. So I watched that film, and was instantly reminded how far out there Fried Barry was. It’s not that Ready Player One is a bad movie, exactly; just a very standard one, a vary obvious one, and one that reminded me how much over the course of two weeks of Fantasia I’d gotten used to the individual and the weird. Reminded of that, I realised Fried Barry was more of a success than I’d first given it credit for. It’s got a distinctive sensibility, and a willingness to go to dark and odd places. It’s not elevated in any sense, but that’s fine, that is what it wants to be. There’s not much more you can ask of a movie than to do the thing it sets out to do, and that is what this one does.