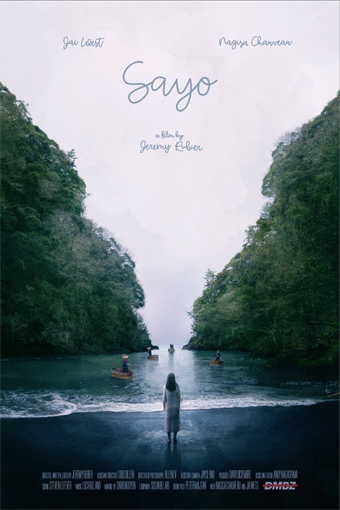 In covering a film festival, one does not always select the films one sees out of a pure love of cinema. Or even love of genre. Scheduling plays a part, and sometimes delivers to you an unexpected delight. Fantasia 2020 had fewer happy accidents of scheduling due to its all-virtual nature, but as the festival’s final day wound down I found myself with just under three hours until all the movies would go offline — meaning I had time for the film I’d wanted to watch, plus an hour or very slightly more. Glancing over the schedule I found a movie I’d considered looking at which was listed at 61 minutes, and decided I should give it a shot.

Jeremy Rubier’s Sayo was scheduled with two shorts that I would not have time to watch, but it was intriguing enough on its own. A Japanese woman named Nagisa (Nagisa Chauveau) is mourning her twin sister, Sayo, whose last letter she’d never answered. After a ceremony at a Shinto temple in Tokyo, a strange taxi driven by a demigod (Jai West) takes her on a trip to the breathtaking landscape that is the land of the dead. There, she will face her grief even more intensely and perhaps come to some kind of peace.

Rubier, a Quebecois director living in Japan, wrote and directed the film after Chauveau recounted to him the true story of her twin Sayo. He worked out the story while reading Sayo’s letters, watching home movies of her (some of which appear in his film), and listening to her music (again, some of which is heard in the feature). In January of this year, according to Rubier in a fascinating question-and-answer session, he heard about the COVID-19 pandemic emerging and, having lived in China, at once guessed at what was coming and insisted on shooting the film right away; he finished the script in January and shot it (over six days) a couple months later.

It’s stunning to think that this film was entirely shot and finished in less than nine months. It’s beautiful, measured, and thought-through. The narrative is rudimentary, but the emotional content is powerful, and emerges through the visuals in a purely cinematic way.

It is true that this is mostly a mood piece, but it’s a mood piece that works. Given the short running time, the narrative framework’s as detailed as it needs to be. Nagisa moves through different places and different phases of grief, and what she’s feeling at any given moment is perfectly clear and comprehensible. She encounters temples and religious ceremonies as well as surreal moments, and has flashbacks of memories of her sister, and you have the feeling of her moving along a journey of coping with grief.

Chauveau does a remarkable job here, acting for the most part not against other actors but on her own against the landscape, sharing the screen with the beauty of woods or shoreline. Still, she brings out what her character feels at every moment. It is true that the nature photography is excellent, whether seen from her perspective or overhead through stately drone footage. But her acting means we see more than the elegance of pretty pictures; Chauveau gets across her character’s emotion in isolation so well, the landscape becomes a reflection of her and is animated by her grief. 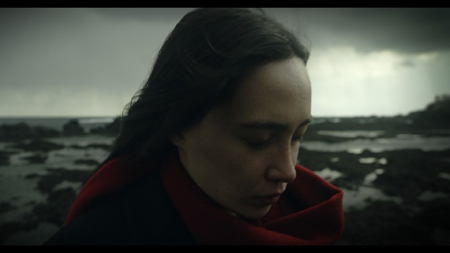 There is more to the film than her being sad and alone; we get the story of the taxi driver, and we see Nagisa taking part in a ceremony at a temple in this otherworld. (An actual temple, an actual monk, and indeed an actual ceremony; the monk evidently informed the crew that they could shoot the ceremony he’d conduct, but they’d only be able to do it once because after he was done the first time Sayo’s spirit would no longer be bound to earth.) Quite apart from its religious aspect, the ceremony works narratively in the film because the direction captures the emotional core at the heart of the ritual. It is about grief, and about a soul moving on, in a way that reflects the rest of the film.

So there’s enough variety here that Nagisa’s story develops and her relationship to her sister’s explored in different ways. The editing rhythms are strong, so while the film’s measured as befits an extended tone-poem about grief, it also moves and builds in a way that keeps a viewer’s interest. This isn’t a movie that has a complex plot, but does have just enough variety to bring out the different phases of emotion the lead character feels. It’s a film that builds itself out of its breathtaking visuals in a way that shows real talent and a strong eye for storytelling. It’s not a film for everyone, or for every day, but it’s a film that does what it wants to do in just the way it wants to do it, and succeeds as a work of art keyed to a central human emotion.