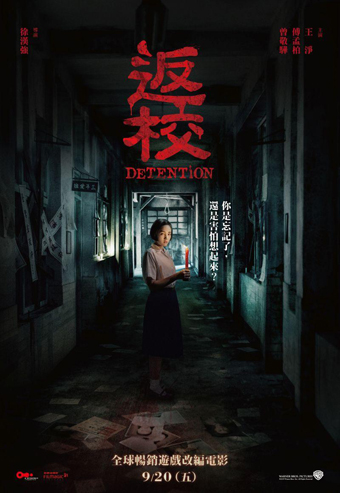 Day 5 of Fantasia began for me by watching Simon Barrett give bad career advice. Barrett’s the writer of horror movies such as The Guest and You’re Next, and he took questions from an online audience for what turned out to be more than two hours in a self-effacing discussion about how the modern movie industry works (or fails to), and how aspiring filmmakers can prepare themselves for entering that world. It was a funny, detailed, and generous discussion, which you can find here.

After that I watched my first feature film of the day, Detention (Fanxiao, 返校), a movie from Taiwan directed by John Hsu (his first feature, in fact) from a script Hsu wrote with Fu Kai-Ling and Chien Shih-Keng. It’s based on a game from Red Candle Games, conceived by Yao Shun-Ting, which has apparently become a cultural phenomenon in Taiwan. There’s already been a novelisation of the game; the movie version of the story was released in Taiwan late last year, and became a box office smash.

It’s set in 1962, during the decades-long period of martial law in Taiwan known as the White Terror. Two teenagers, a boy and a girl, wake up in their school. They don’t remember falling asleep, the school looks different and eerier, and they’re apparently alone except for demonic versions of their teachers and creatures that might be ghosts or demons. A flood hems them in the school grounds. They have to survive and figure out what’s happened to them, and this set-up suggests the story’s video-game roots.

But the development of this concept’s surprisingly powerful. We start with the perspective of the young woman, Fang (Gingle Wang), but soon learn that the young man, Wei (Chin-Hua Tseng), was involved with a secret book club, copying and reading the work of forbidden authors like Rabindranath Tagore. As the two explore the school and deal with the horrors therein, we learn more about the book club and the two faculty members guiding it, Chang (Fu Meng-Po) and Yin (Cecilia Choi). The dangers that come with being part of the club are made clear, and we see the punishments handed out to people merely suspected of possessing literature deemed subversive. (So, yes, the first rule of book club is nobody talks about book club. And for good reason.)

But we also get an early flash of imagery suggesting Wei has or will meet with a rough fate. In fact the movie plays with chronology a lot, and very effectively. As we learn about what’s brought the two youths into the darkened school, we see past events from multiple angles, with different levels of knowledge, and the film does an excellent job of letting us know just enough at just the right time. Nor do the flashbacks slow the story down overmuch. In fact one particularly extensive flashback struck me as perfectly placed — taking us away from the nightmare environment long enough, and at the right place, that it keeps the horror from becoming normalised: we return for the climax, and the place is still disconcerting. 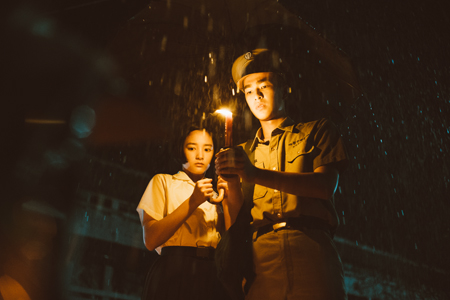 Which is to say that this movie has a strong structure. The opening may feel like a video-game, but this is a cinematic story, moving coherently and creatively to a dramatic climax. That climax has an unexpected tone, as all the mysteries have been exposed, and an elegiac feel takes over the movie. What started as a horror story has become a very dark fairy tale centred around the human experience of a troubled time in a nation’s history.

The movie is horrific, in part because the political situation it depicts is horrific. But also because the evil that causes tragedy is not located solely in the external world; not just in the political context. We learn that the characters that we follow have their dark sides, that they have made choices that to an outside observer must be considered wrong, and that the consequences have a gravity out of all proportion.

The political situation is clearly established, and by extension the characters and their situation are dramatised well. You know why they’re doing what they do, and what they’re risking. And the slow unfolding of the mystery of what exactly happened at the school is well-planned and well-paced — the right information’s given out at the right times and at the right speed. The amnesia gimmick’s justified by the story.

Visually, the movie handles its different tones deftly. The shadowed school of the beginning feels not just creepy but unearthly, as it ought. Flashbacks to the daylight world are cold when the film wants to bring out the regimented life of the school, warm to bring out a romance and the human world that goes on even under political repression. That romantic element, in this case a potentially troubling element, is handled with some delicacy; I thought it was reasonably effective, though I can see some viewers being nonplussed particularly by the end of the film. 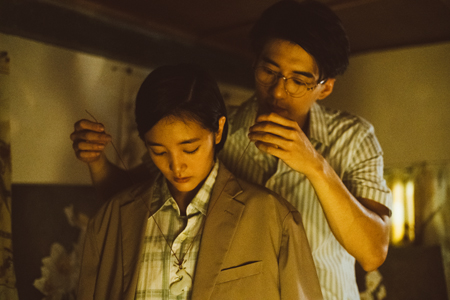 There’s not a lot to complain about here. The CGI was inconsistent, but this is not a movie that lives in its big set-pieces. The climax loses in drama what it gains in inevitability; with the mysteries solved, the set of events that end the film are just about what you expect they’ll be. But these are minor issues.

What is most important is that the themes of the film have power and resonance. Beyond the necessity of freedom of speech and freedom of thought, this is a movie about the importance of bearing witness and of remembrance. In that sense the amnesia of the characters at the start of the film is not just a plot contrivance but a direct symbolic idea: a film about the importance of remembering the past has its characters struggle to remember their own pasts. Their slow recovery of their personal histories reminds us of the importance of remembering history in general.

Frankly, Detention surprised me with how good it was, and specifically with how strong a central idea it had. It’s deeply human, with an understanding of how easily people can be driven to petty actions, and how extensive the ramifications of pettiness can be. It’s damning with faint praise to say that it’s the best film adaptation of a video game I’ve ever seen. This is simply a fine movie, with real thematic heft, a clever structure, strong characters, a plot that’s shaped by the choices of the characters, and good horrific imagery. It builds a fantastic world with a purpose and links it to the real world and real history. This is a thoughtful work; I hope it finds an audience outside Taiwan.