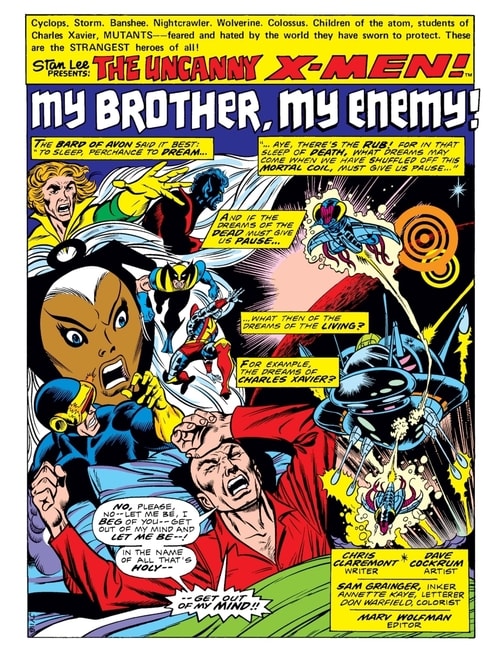 Swinging for the fences is a characteristic of Claremont. Also characteristic of Claremont’s style is laying down markers in issue #97 for a story he wouldn’t even bring to full speed until #106, wouldn’t conclude in an immediate sense until #108 and wouldn’t finish completely until issue #137. Claremont stories are long. And Cockrum swing for the fences too with some spectacular art – check out the double-page spread below. And the lay-out. Notice how your eye follows the expanding images on the lower right. Apologies to those of you reading on phones… 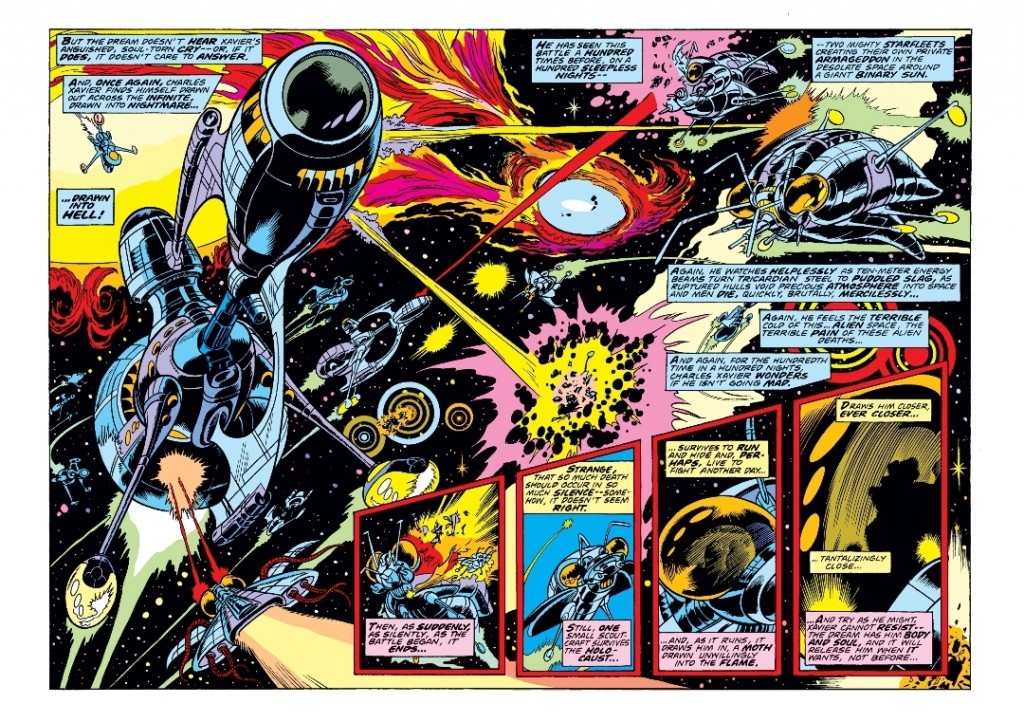 You could tell that Claremont was leaning into Cockrum’s first major professional artistic experiences. Uncanny X-Men was Cockrum’s first long-run Marvel work, but he’d already done a good spell at DC on the Legion of Superheroes, which he only left because of a dispute with Carmine Infantino over who got to keep the original art after the comic was finished. So space battles and big teams were already Cockrum’s forte.

Issue #97 is an exciting story that holds up still today, although even Claremont admits in later years that it’s overwritten. I cringed at a Lorna Dane “I feel like a woman” soliloquy as a single example among many of overwriting. The plot is that a villain called Eric the Red uses mind control to recruit Havok and Polaris to kill Professor X.

This is weirdly meta because Eric the Red was a temporary disguise Cyclops used to infiltrate Mesmero’s operation during the Steranko period. This Eric the Red is a spy of the extraterrestrial Shi’ar Empire and no one ever explains why he copied Scott Summers’ hastily-developed alias. 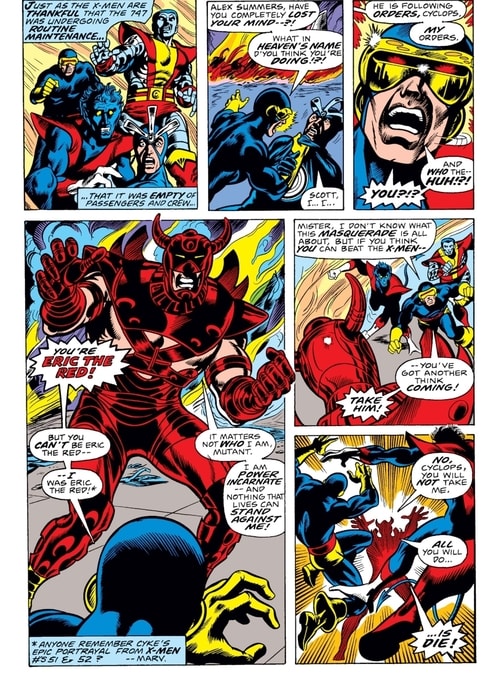 The fight is a draw, but it will lead to the events in the epic Uncanny X-Men #105 ,#107 and #108. It’s exciting! Seriously. Get ready. Although it’s not like there’s any lack of good stuff right now. Issue #98 starts one of my favourite 4-part X-Men stories.

The X-Men are enjoying Christmas and Scott and Jean are going out on a date when the Sentinels attack. It sucks for those of us seriously wanting the lucky couple to just catch a damn break, but one of the X-Men’s most objectively and thematically powerful foes is back, which is great. This is also the first time we ever see Wolverine unmasked. Surprisingly, this is also the first on-screen kiss for Jean and Scott – it only took thirteen years! 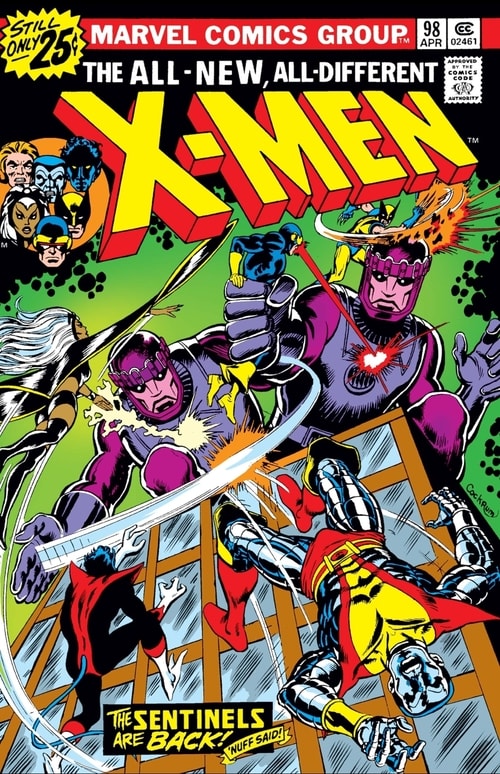 Claremont explained in one of the Masterworks that having taken over the series at issue #94, he had the double pressure of establishing his own vision for a new series and working towards something special for issue #100. Issue #98 is his serve in the opening of the game. Grainger is still inking, but I’m getting used to it, while longing for when better matches like Joe Rubenstein eventually get paired with Cockrum. 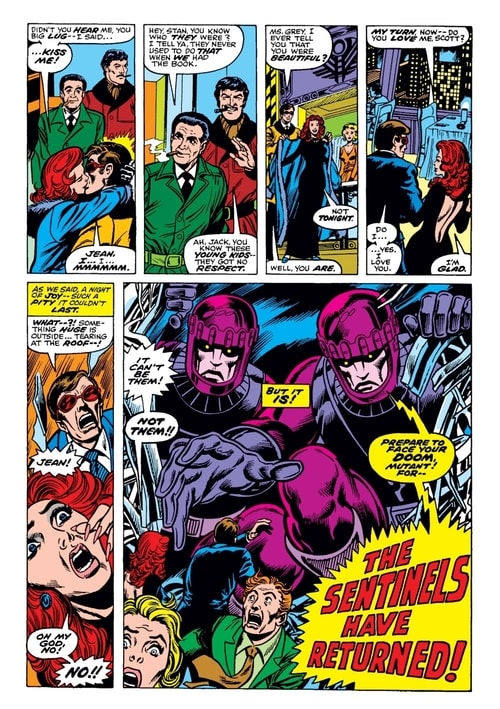 Cockrum and Claremont also add visual gags to this issue and many others. Nick Fury and Contessa Valentina Allegra de Fontaine are visible in one of the backgrounds. Jack and Stan make an appearance, commenting on kids these days (see image above). Chris Claremont and his wife Bonnie appear too. 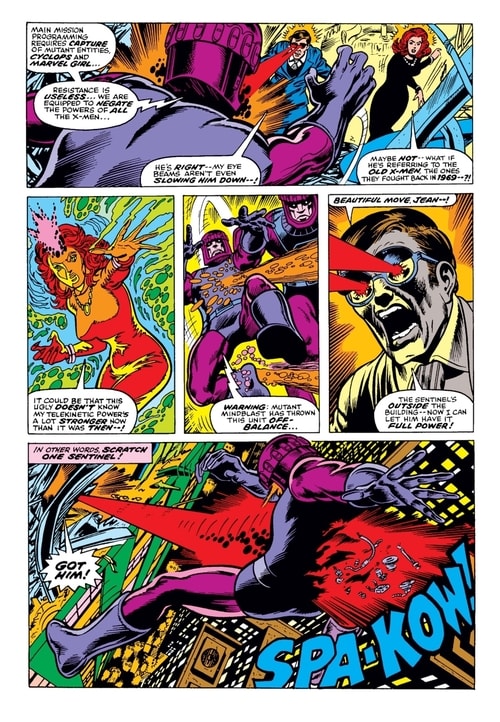 The Sentinels strike, prepared for Cyclops and Marvel Girl, but in another Claremontian trope with respect to the power sets of women characters, Jean Grey is now more powerful. Claremont had done the same with Polaris and Storm just came powerful. However, the Sentinels still capture Marvel Girl, Banshee and Wolverine before plucking a vacationing Professor X off his friend’s yacht called the Dejah Thoris. I don’t know if this last was a Cockrum fan joke or if he’d already known that he would be inking the cover and interior for the first issue of Marvel’s Warlord of Mars series a year later. 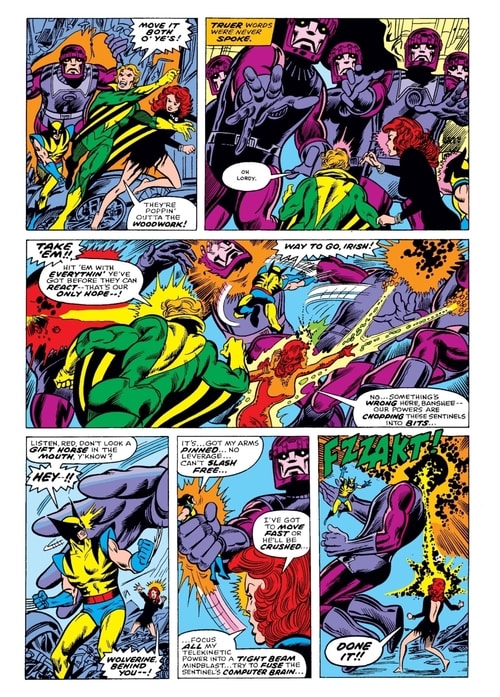 This issue is all trouble for the X-Men and features a great battle with Marvel Girl, Banshee and Wolverine against a lot of Sentinels, although even this is all set-up for the big reveal that these captive X-Men are being kept inside a satellite. They’re trapped. 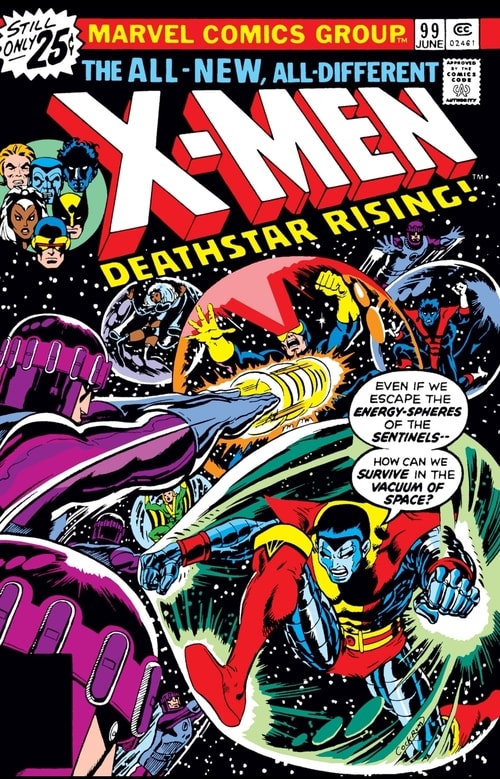 Uncanny X-Men #99 to #101 were three of the issues I found in black and white and translated in French on a roadtrip through Québec when I was eleven years old. With just issues #99-#101 and not labelled as such, I didn’t know what was going on, but finding this old story was like striking gold for me as a young collector. The cover to #99 still strikes me as hard now as it did then and the interior inks by Frank Chiaramonte are soooo much better than Grainger’s. The beauty and evocativeness of Cockrum’s pencils become very powerful. Check out the difference in inking below. 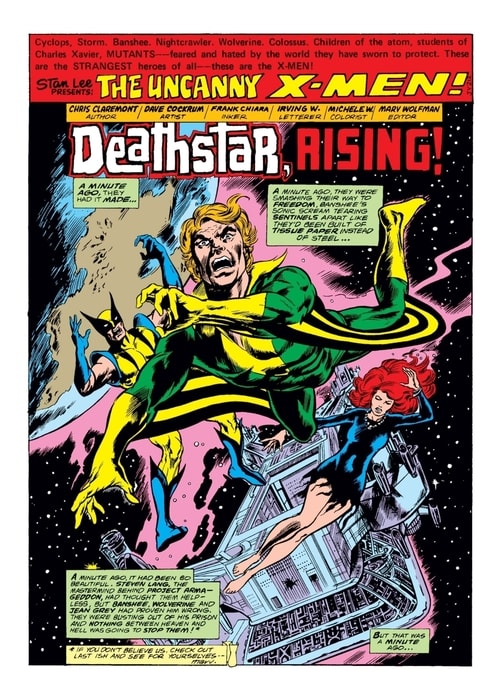 While we’re talking art, I’d like to make a point about the craft of writer and artist. Check out the use of time and pacing in the page laid out by Cockrum below, and the interior angst in each of the characters in the following image paired with the energy of the take-off. This level of character work was not at all standard for the Bronze Age. The X-Men of course inherited a “Marvel House Style” of melodramatic stories, but Claremont was on the cutting edge of comic storytelling and he was paired with an artist who could match him innovation for innovation. 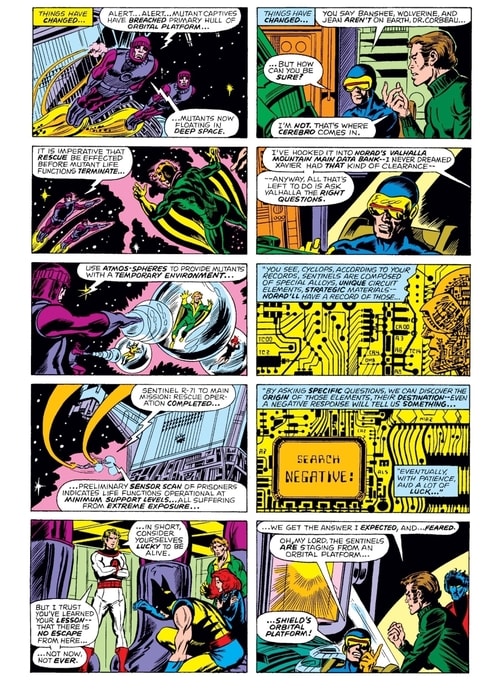 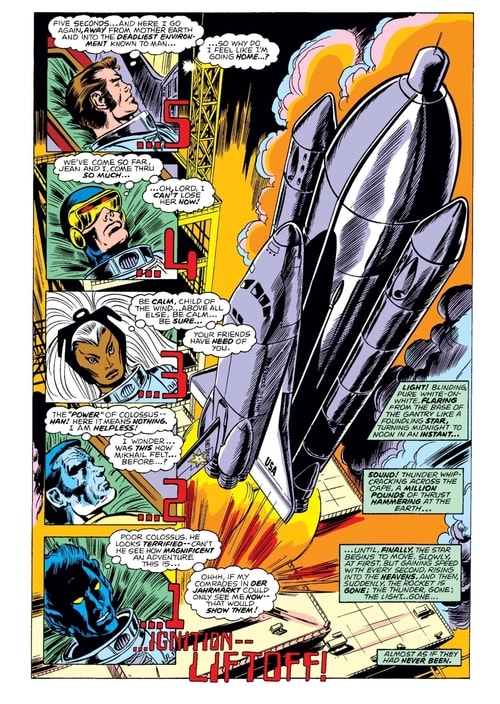 Luckily for the X-Men, their friend Dr. Corbeau (who was with Professor X when he was kidnapped) can manipulate events to get the X-Men onto a shuttle to get them to the rescue. The 100th issue of X-Men, that Claremont was working towards for a year is a great issue. The Sentinels prove to be no match for the new X-Men, but the evil builder of the Sentinels (who sounds eerily like the raving racists of today) has built some X-Sentinels based on the original X-Men. So we get treated to a great battle of original X-Men versus the new and the very first appearance of the Fastball Special. 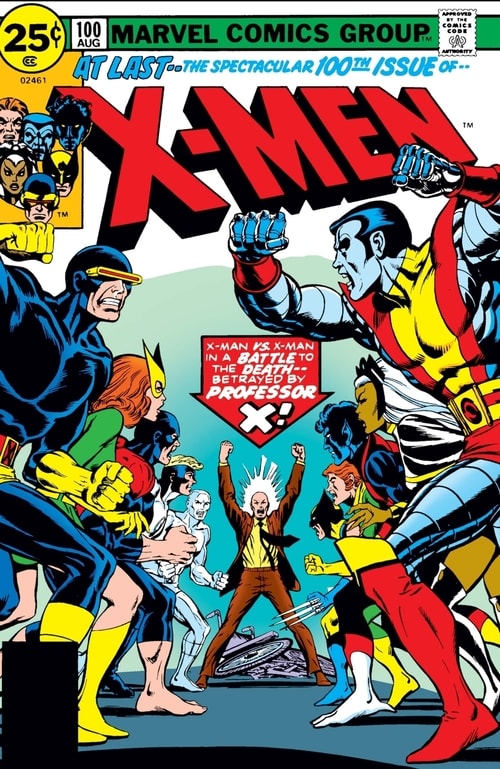 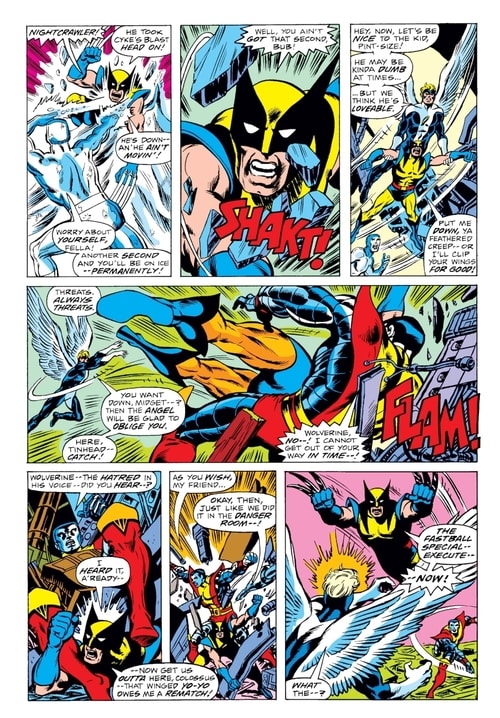 Cockrum, of course, treats us to spectacular visuals and two double-page spreads in this issue. 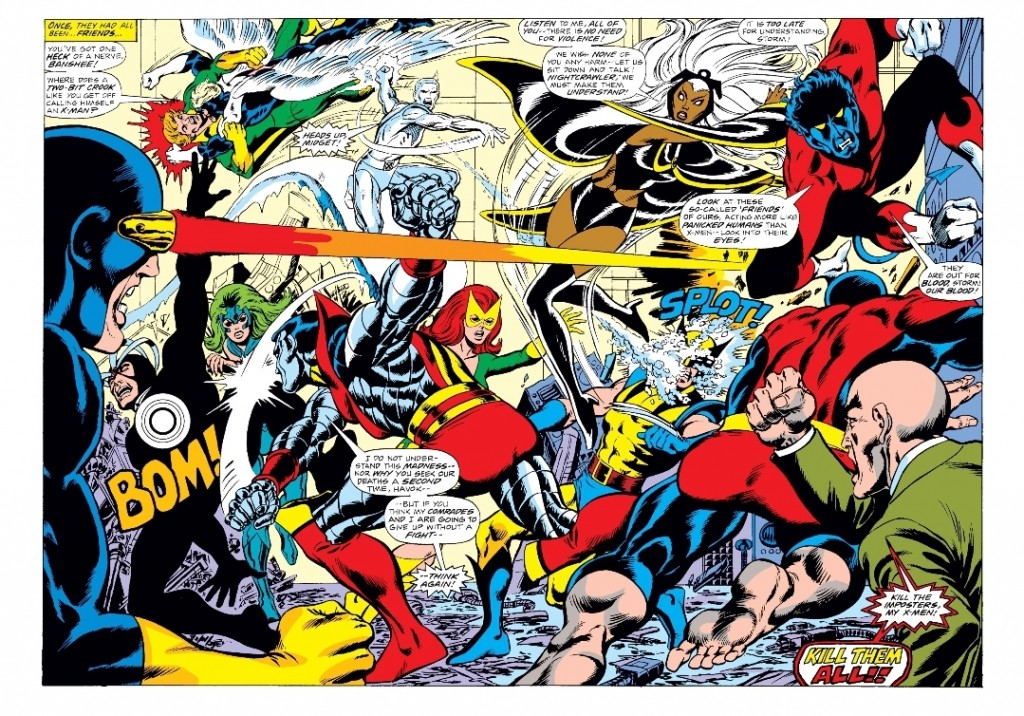 The key to solving the problem for the X-Men turns out to be Wolverine. Wolverine doesn’t really learn how to control his hair-trigger temper consistently until issues in the 170s, once he’s had his own limited series and he’s about to get married. In this era, he’s always half a step from turning someone into a corpse, so when he goes a bit crazy with anger here, his animal senses realize that these originals aren’t real and he chops up fake Jean. 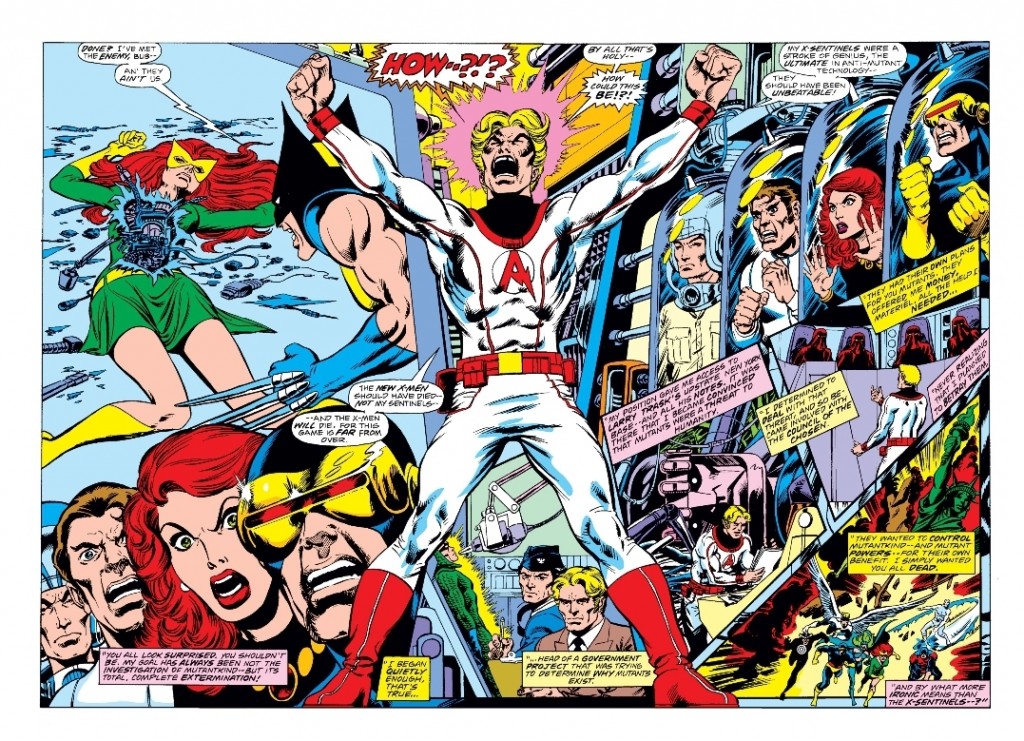 The art above is just amazing, and matches the density of the era. We’re far from decompressed storytelling here. Every page is crammed with panels and events, so the art can suffer, but in the hands of a master like Cockrum, the effect is still visually striking. After the battle though, the X-Men have a problem. 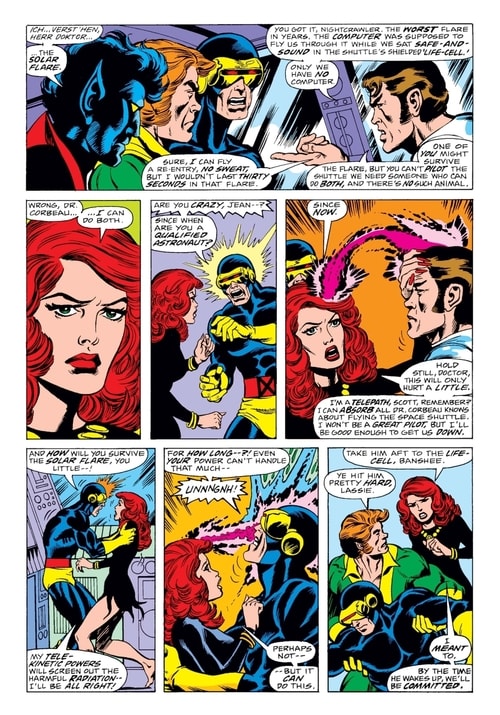 The Sentinels damaged the space shuttle’s computer so autopilot is gone, and with the coming solar storms, somebody needs to pilot manually. Corbeau as an astronaut can fly, but he can’t survive the radiation. None of the X-Men are astronauts, even if any of them could survive. Jean solves the problem by taking Corbeau’s knowledge and memories of piloting. She’ll bring them down. 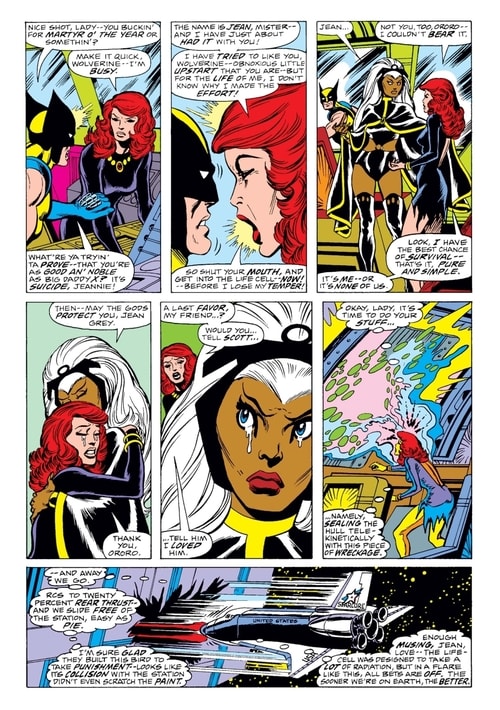 This is nothing less than a suicide mission and everyone knows it. Scott refuses to allow Jean to sacrifice herself, so she psi-blasts him unconscious. Wolverine is a giant tool about it, so Jean tells him off. Storm is the only one with the emotional fortitude to say goodbye to her friend with the full knowledge that this is the end. And with that, Marvel Girl flies the shuttle out of the satellite and brings them to Earth during the worst solar storm ever recorded. 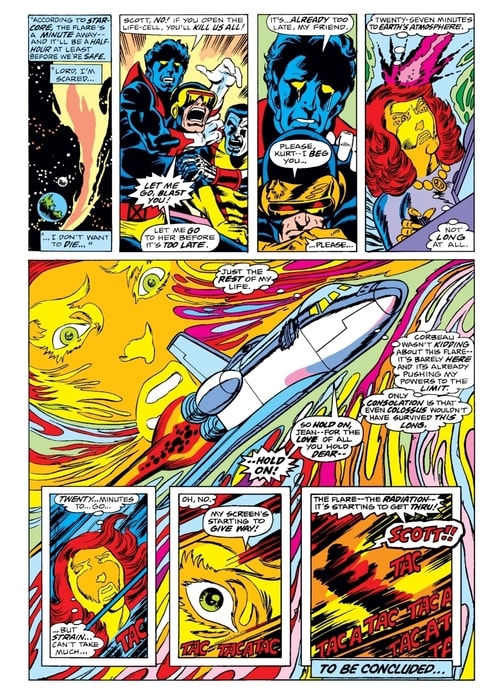 Issue #100 ends with one of the most famous and recognizable cliffhangers in comics history (above). Issue #101 opens with the crash landing and the emergence of Phoenix from the waters of Jamaica Bay in the scene shown on the cover (that I used as the lead image). There is no more development or answers about Phoenix in issue #101, so I’m going to stop there, because the rest of issue is really more part of the storyline I’ll cover next blog post.

This 4-issue run is one of the most consequential in X-Men history. The Phoenix and Dark Phoenix Saga, which will take the next 36 issues to resolve, is one of the landmark runs in all of comics and in terms of sophistication of art and story, raise the bar for all comics that follow.

An interesting point is that Uncanny X-Men was printing 266,255 issues (one year average) and selling 118,544 (one year average). This is not a lot for the era, so Uncanny X-Men was a niche title.  The sales numbers wouldn’t change appreciably for a while. In 1980 and 1981, they climbed to 171,000 and 191,000. Uncanny X-Men became the sales juggernaut we know in 1983 with 313,000 sold, 1987 with 417,000 and 1991 with 415,000 sold. And of course, the Claremont/Jim Lee X-Men #1 in 1991 which was the highest-selling comic of all time with something like 7 million sold. When I began buying Uncanny X-Men off the stands in 1981, it still felt quirky and off the mainstream. This seemed reinforced by my friends buying Avengers and Daredevil and New Teen Titans which felt like the more popular part of comics at the time. So my love of the X-Men felt special and like something for me. These issues still make me feel that way.