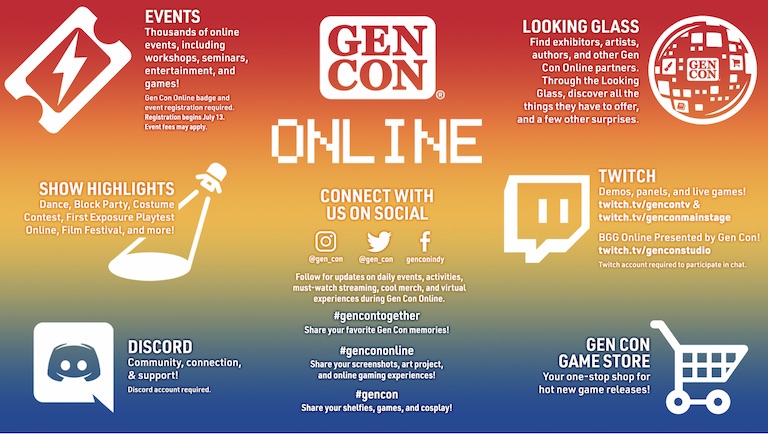 Gen Con is a major — the major — tabletop gaming convention of the year. 60,000 gaming enthusiasts arrive in Indianapolis (where the con has been held since 2003) to participate in thousands of board games, card games, miniature games, role-playing games (including live action), seminars, reveals, auctions, and cosplay. And more. Spread across the Indianapolis Convention Center, multiple hotels, and Lucas Oil Stadium, the scale of Gen Con is unmatched.

Gen Con undertook the challenging task of offering an extensive virtual convention, featuring many tabletop gaming sessions and the sprawling, chaotic, glorious Dealer Hall of gaming companies, artists, dice creators, and many others hawking and showing off their goods. In past Gen Cons I have run games, participated in seminars, and spent hours roaming the Dealer Hall. From Thursday evening to Sunday afternoon, my weekend would be little else but gaming, shopping, and some sleep along with visiting a food truck to scarf down a meal between. This year would be different.

For Gen Con 2020 in its online version, I signed up to run three games, attend a seminar, participate in a seminar, and played a game along with perusing the virtual Dealer Hall. Planning for the next Gen Con happens after the current one ends, so the Gen Con folks had to scramble mightily beginning in March when the possibility of not having a physical convention first reared its head. For several weeks, Gen Con had to prepare to do two conventions: the one they had planned on and this new virtual one. With the decision on May 19th to cancel the physical convention, all efforts could be devoted to the virtual version. With that said, I expected that

The end result was an impressive effort. While not being able to play at a physical table will never be replaced, Gen Con did support online through a set of tools familiar to physical conventions. Events were submitted and posted via a common portal. Gen Con made no effort to restrict what virtual tabletop software or tools were used for gaming. Personally, I used Roll20 and Discord — a common enough setup. In the Delta Green game I played in, the organizer used Roll20 and Google Meet. Gen Con charged a nominal fee ($2), though — like always — organizers could charge above and beyond that for the session. Two key differences were: 1) Gen Con Online was free to attend and 2) the session fee was not tied to the length of the game.

Gen Con provided a messaging application in the event details to communicate with the ticket holders, ensuring private communications while also being able to relay information for links to the virtual table tops, meeting links, etc. With all of that out of the way, the games I ran felt very much like current online games I run. A satisfying experience — one that allows us still to game — though not the in-person experience of course. Several other game organizers ran tabletop non-role playing games via tools like Virtual Tabletop and others successfully by all accounts. 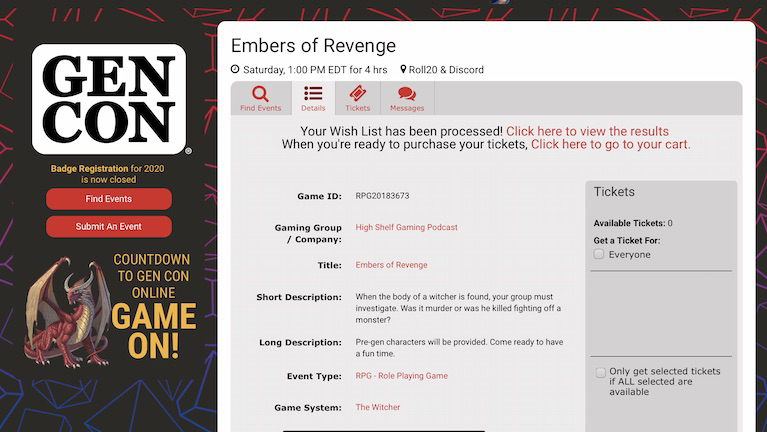 I attended the All Things Dark and Cyberpunk seminar, which was hosted by High Shelf Gaming (full disclosure, I’m friends with the team there and I ran my games through their organization). This was a Twitch stream where J Gray emceed a conversation and facilitated questions for Mike Pondsmith and James Hutt to talk about R. Talsorian Games and Cyperpunk Red. 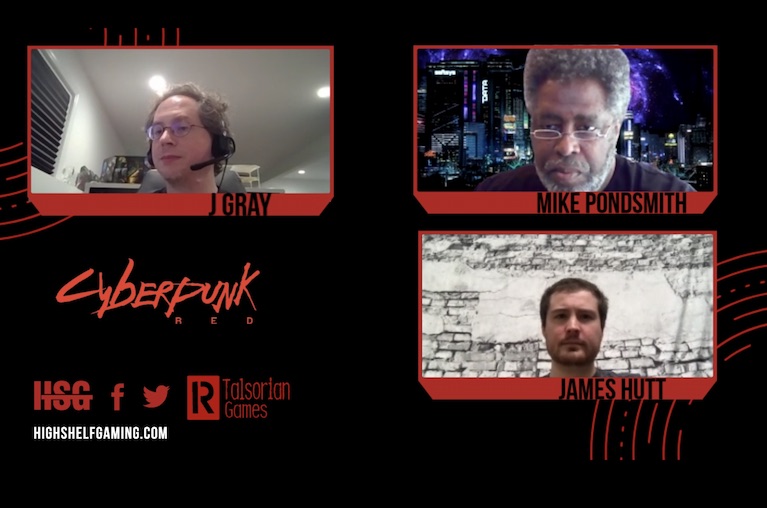 I participated (also on Twitch) in the Worldbuilding with LegendKeeper seminar with High Shelf Gaming, Icarus Games, and LegendKeeper to talk about how we world build and the tools we use, including LegendKeeper. Both seminars were entertaining and informative, though they were like many other such Twitch streaming events. In some ways, it was easier to ask questions (via Google Form or Twitch chat), even if we were watching the session on our computers. Additionally, the sessions are now preserved in the Internet — without any degradation of quality of trying to record an in-person event and putting it online. 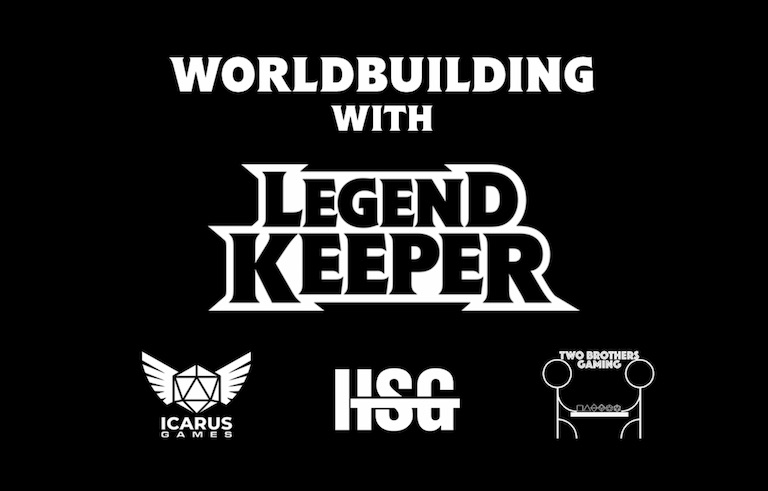 I played in a game, which is a rarity for me. Dylan Bach ran a scenario of Delta Green called until The Grotesque Code. As a participant, signing up for events was very similar to previous Gen Cons. I perused the event listing, made my wish list, and submitted it at the earliest possible moment. I ended up in the queue and crossed my fingers about getting what I wanted. Also the same, I experienced some disappointment and success in getting what I wanted. I was fortunate enough to get into The Grotesque Code, which was an enjoyable session and operated much like the games I myself ran (except on the player side). Turning in tickets was easy. 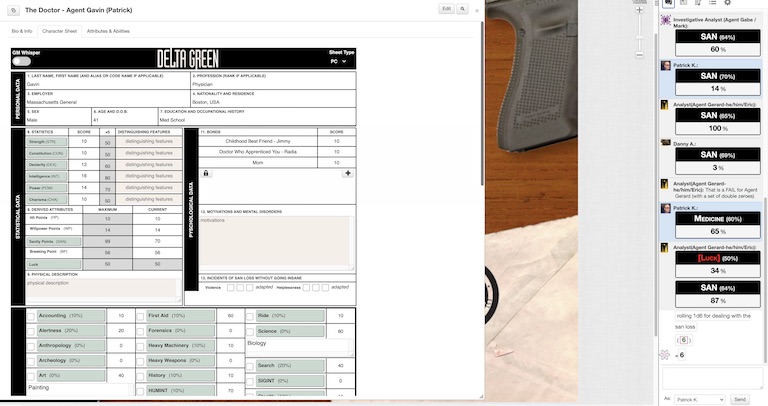 The Virtual Hall, which Gen Con called The Looking Glass, was the most divergent experiences from the physical Gen Con. The physical Dealer Hall is impossible to give a full reckoning because of its sheer immensity. Hundreds of vendors fill a large expanse of dealer space… from small booths to booths with roped corridors to handle long lines and everyone bumping elbows and dodging the people with giant backpacks as they turn oblivious to all others in their arc. It is overwhelming. It is exhilarating. It is where you can find nearly any game or game accessory you want. One could spend all four days in the Dealer Hall and feel like they have missed much. 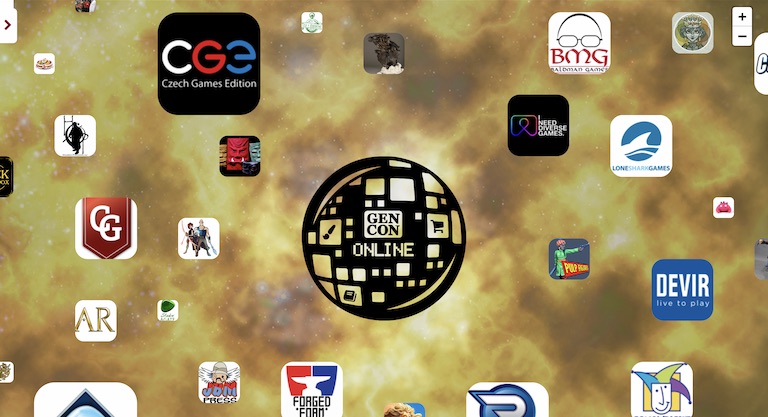 How do you get that into a virtual con? Well, you can’t, but Gen Con gave it the good-old college try with The Looking Glass. The dedicated website featured the dealers in a sprawl on the screen. Icons depicted the vendors, though many relied on what seemed to be generic icons. A person could scroll around and zoom in and out and click around. Individual vendors had their own particular set up, but generally they had a link to their website, a link to a promotional items, and an event link. The websites were pretty straightforward, but the promotional links were varied: Twitch here. YouTube there. A special webpage on the company site for Gen Con discounts. Or just the company page again.

If the link was to Twitch or YouTube, you could see an icon beside the link, which was informative. If a vendor had events,  then following that link took you to the Gen Con Events page that had the vendor’s filter already applied. All in all, the experience was ho-hum. Basically, you were shopping web pages, and the icons for some vendors were not easy to discern what they were selling, requiring a person to click in. A further click was necessary to see the products generally. That said, putting this together in a few short weeks was impressive, and it can be improved upon in the future if necessary. In other words, I’m not sure how much better they could have done. 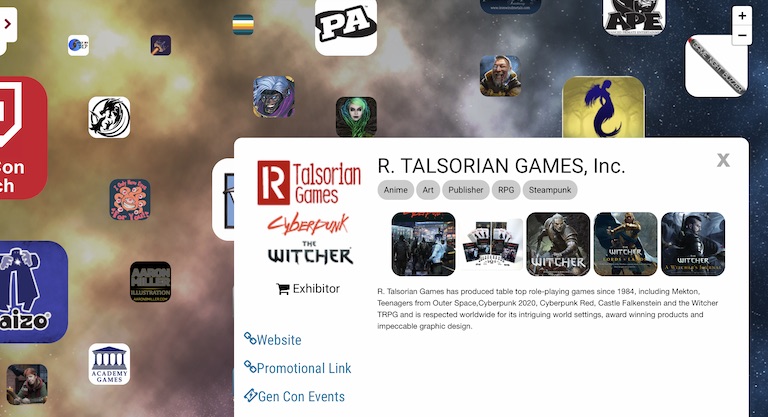 So how was Gen Con Online?

Better than expected, frankly. I was still able to connect with new players and run games in my favorite systems (I mean, I ran a Traveller5 game, which is not easy to get going outside of cons in my area). People participated, and I didn’t see any griping or complaining. People were patient and engaged. Yeah, the occasional disruption — kids appearing in the background, the dropped Internet connection, people forgetting to mute as they microwaved their popcorn — but nothing horrifying, nothing that broke the games. And while I did not have that excited-exhaustion of running eight games, hitting the Dealer Hall, rolling actual dice on a table, cheering in unison as those dice turned up criticals, and trying to absorb all the awesomeness of the convention, I did have a lot of fun, and it provided a bit of normalcy amidst a sea of COVID and of watching Major League Baseball wrestle with containing outbreaks.

Gen Con is not the same virtual, but no convention is. I’ll look forward to having them again in person, but in the interests of safety and community, a virtual Gen Con helped to keep the fire alive and satisfy what I love so much about gaming: getting together with some friends or strangers and engaging in stories together.

Patrick Kanouse encountered Traveller and Star Frontiers in the early 1980s, which he then subjected his brother to many games of. Outside of RPGs, he is a fiction writer, avid tabletop roleplaying game master, and new convert to war gaming. His last post for Black Gate was Protect the Frontier: Star Frontiers Roleplaying. You can check out his ongoing, play-by-post, referee-less Traveller game at basiliskstation.blogspot.com or follow him and his brother at Two Brothers Gaming as they play any number of RPGs. Twitter: @patrickkanouse. Facebook: Two Brothers Gaming