Below is an excerpt from comic book artist and writer Becky Cloonan’s essay  for the upcoming book, Robert E. Howard Changed My Life, from publisher Rogue Blades Foundation.

Ah, comic books! The great escape. Arguably (and don’t tell my partner this) my One True Love. Drawing comic books has been my dream since I read my first issue, a Silver Surfer Annual from 1988. Granted, I wasn’t a very good artist back then, but I drew every day, determined to improve myself no matter how long it took. New York City had changed me, true—but even with my new-found interests, music, philosophies, and friends, my love for drawing was still paramount. I still maintained the childhood dream that making comic books would one day be my only job.

Nearly twenty years have passed since then, and somewhere along the way that dream came true. I still draw every day, and with the same determination to improve myself. Surprisingly, I love it now as much as I did back then. I suppose there is the pressure of turning your hobby into your career, but that’s a whole different essay.

I still love drawing, but its purpose has changed. Little by little though, the more I relied on comics for my income, the less of an escape they became. There’s nothing to fear in my past anymore, and because it can’t hurt me I’m free to draw purely for the love of the thing. I had learned to fill in the cracks left behind from childhood in other ways. In the last few years I grew my hair back out; now I wear it long, like I did when I was young. And I’m still drawing comic books. 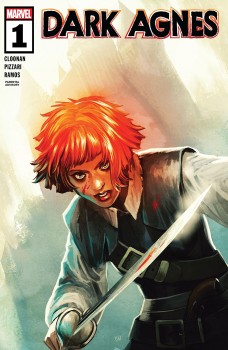 Wherever you go, there you are, right?

Funny enough, it was through comic books I was introduced to Dark Agnes.

I’ve been a professional in the comic industry for eighteen years now, both writing and drawing my own stories, as well as collaborating with other artists and writers on licensed and creator owned books. The first Robert E. Howard property I ever worked on was Conan, an adaptation of “Queen of the Black Coast” for Dark Horse Comics. I was thrilled. Conan has always been a favorite character of mine, and that particular story was one I’ve read over and over, falling as in love with Bêlit as the Cimmerian did. I was given the freedom to re-design the characters for the series, and it was a great boost to my confidence to be trusted with bringing my own visual interpretation of such an incredible story to life.

My work on Conan was, in part, probably why Marvel editor Mark Basso reached out to me to work on their new Dark Agnes miniseries. Wait. Dark…who? I consider myself fairly well-read, and I’m familiar with much of Howard’s work. Hell, I practically lived in Hyboria when I was drawing Conan. How had I never heard of Dark Agnes before? My shame was short-lived when I found out Howard only wrote three short stories about Agnes, one of which was never finished. Now I have no qualms admitting that before Mark’s first email, I had never heard of the character before. Everything happens in its own time.

I was immediately intrigued by Mark’s description of the character: a bad ass swordswoman stirring things up in the early sixteenth century, and I was particularly excited to read new work by Howard that I had previously been unfamiliar with. What a treat! I dug into the stories the hour they were sent to me. I knew from the jump that I would enjoy them, but I was unprepared to find out exactly just how much Agnes and I would have in common, and what kind of memories she would stir up in me.

Becky Cloonan is a comic artist and writer best known for her work on Batman, The Punisher, and Conan the Barbarian. She is also passionate about self-publishing—her latest mini-comic, “The King’s Story,” was a follow-up to her critically-acclaimed collection of short stories, By Chance or Providence. She loves her morning cup of coffee, true crime podcasts, old movies, and somehow after all these years still manages to draw for fun. Becky currently lives in Austin with her partner Michael, two annoying cats, and a few dozen plants.