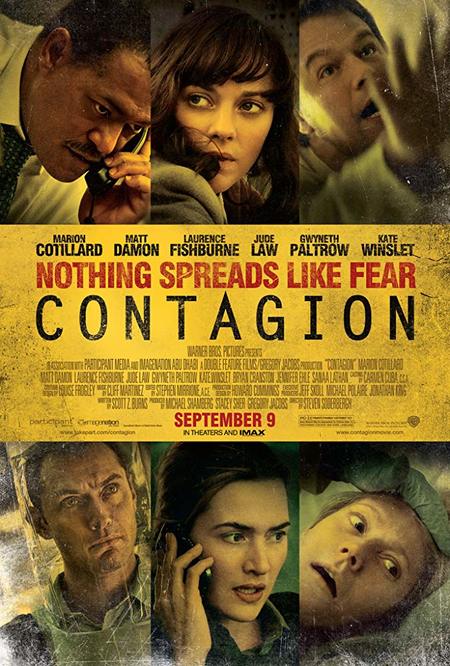 The 2011 film Contagion is being remembered in light of current events. I remember it well — especially the part about not touching your face! Here’s what I wrote about it on my blog, back then.

Brief plug for the movie Contagion, an intelligent medical-thriller about a plague [that] quickly breaks out worldwide, killing a quarter of those infected. I was impressed by the Slate dialogue between Arthur Allen and Carl Zimmer, and advance articles that described the lengths director Steven Soderbergh went to instill scientific authenticity. The film tends towards a documentary style rather than a overtly dramatic end-of-the-world thriller style; I appreciated the focus on the *process* of analyzing the infection – to an extent it reminded me of The Andromeda Strain, with a similar focus on scientists as heroes (!). I was affected by the dramatic structure which begins the film with “Day 2″ and ends the film with “Day 1″, revealing — to the audience but not to the characters — the ultimate source of the contagion. And the music by Cliff Martinez is my kind of film music (though apparently not yet available on CD).