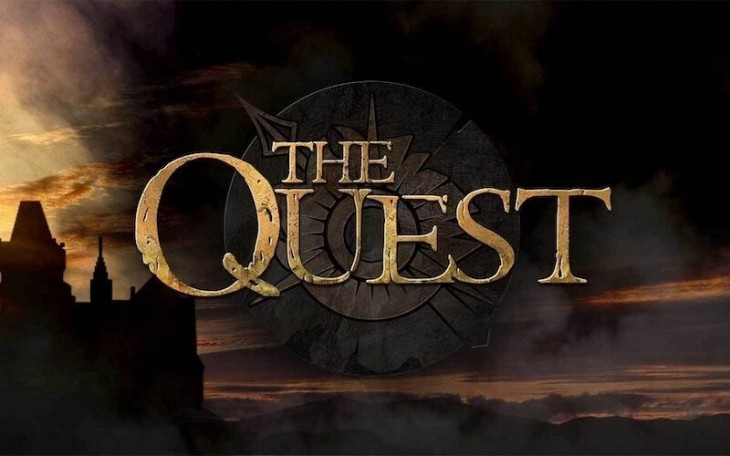 I think it’s fairly evident by now, after one year of writing for this eZine, that I am a gigantic dork. I have come to terms with this, accepted it, learnt to love it, even.

So it is entirely without shame that I proclaim how deeply in love with the show The Quest I fell when it aired some five years ago. Four? Hang on, let me check. I was right the first time. Five years ago.  Holy mackerel. Five years ago. When the season ended I was, along with a small, but dedicated group of fans (waves vigorously at The Quest Army (also, despite being a huge fan of the show, I only discovered The Quest Army last year, and I’ve never been happier than knowing that these wonderful folks exist)), eagerly waiting for news of another season. That news never came. And so, we gathered in our small corners of the internet, writing letters, begging for news, hoping against hope.

Well, not three weeks ago, our hoping, writing and begging paid off.

The Quest is finally, five years later, getting its second season.

But I’m getting ahead of myself. I’m fairly sure that at least half of you have no idea what the hell I’m talking about.

The Quest was an unscripted “reality” show set in a fantasy world. The idea was that contestants were summoned to Everrealm, an alternate world, by the Fates, to compete against each other to become Everrealm’s champion and wield the fabled Sun Spear against the evil Verlox. Each week, the twelve Paladins, as they were called, would work their way through challenges that tested their physical strength and mental game. Those that failed were banished from the realm.

The first episode had me rooting for Shondo Blades. 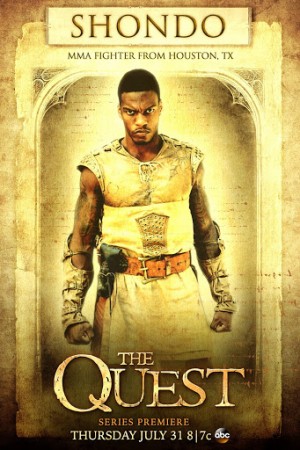 In addition to having the coolest name, the dude was ready to go to war to save some folks, and I admired his protective instincts and his intensity. He was, to my mind, in the beginning the one with the best chance. As time passed, however, I fell in love with Bonnie Gordon. 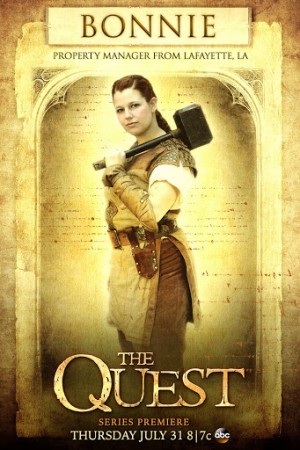 Bonnie was literally the bard of the group. No, seriously. She can sing, and she wrote songs for Everrealm while she was there. What captured my heart and hope, however, was how giving, kind, sweet and tough Bonnie turned out to be. She became the embodiment of the spirit The Quest for me; her primary concern was not winning the competition, but saving Everrealm. To that end, she offered her support to all the paladins.

I did not cry when most of the paladins were banished. I shed a tear when it was Bonnie.

In the end, the winner of the competition was Linda Carollo, and she bloody well deserved it. 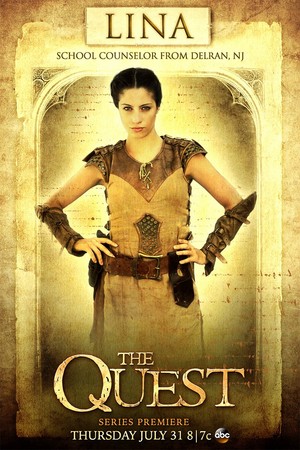 What I loved most about this show was that, despite it being an American led competition show, it wasn’t as cutthroat as other such shows. The paladins were in competition, but, with the exception of one, they were never vicious to one another, and rarely were they underhanded. It was a race to prove themselves worthy, not to cut out the competition. I adored this about the show. I was so enamored of it that I blogged about it. I even made a YouTube video about it. This is the only fandom I have been involved in that I bothered with any of that. I loved The Quest.

You might be surprised to see that all the Paladins were adult people, which, honestly was part of the draw for me. Adults can nerd out, too. They also deserve to experience fantastic worlds.

The new season of The Quest will, apparently, feature teenagers, which has me a little hesitant, as I had loved watched the adult version. Still, I am stupid excited to see the show return at all. I’m also in a little bit of shock. I had hoped so much, but was not hopeful, if that makes sense.

My heart did a little flip when I heard the news. I may have squeaked. At work. There might have been a little hyperventilating.

So, now there’s only one thing left to do.

Beg for a job.

Dear folks in charge of The Quest. I am a writer. I. Have. Ideas. I can join your writing team. Now, my stuff has been described as gritty… which might not work for teenagers (or it might. Have you read much YA these days? They seem to lap it up)… and often quite sad. Honestly, it would be such a dream to work on this show.

Or, you could totally hire me to be an actor for it. I have tattoos, and I’ve ridden a bit. I train martial arts. Sword training is my favorite thing about martial arts. I’ve shot a bow in my time. On horseback. If you’re after a vaguely tribal, semi-nomadic barbarian type who will irritate the more courtly characters with her rough style, but is ultimately on the side of right, I’m your woman. I am willing to shave down the sides of my head for a proper barbarian look.

In all seriousness, though, I am beyond excited to see this show return, and while the teenager thing has me a little fearful that the spirit of the show will change, I will absolutely, without doubt, be watching. I might do recaps and discussions here on Black Gate, or, if no one cares, I’ll do it on my own blog. I’ll be following it closely regardless.

Oh, and one last wave and shout out to The Quest Army, who were very lovely to me, even though I’m a new addition to their awesome group.

Oh-oh! I just found The Quest hiding in the “on demand” section of my cable TV provider (Fios). I may be falling down a televised rabbit hole for a while (10 episodes deep). Can I return the favor, Ms. Carriere, and get you hooked on King of the Nerds?

Oh, you’re lucky! I haven’t been able to find it on any of the channels I have. I’ve been dying for a rewatch. Also… sorry I spoilt the ending?

King of the Nerds, eh? I’ve not heard of that one. Off I go to Google (and I will endeavour to find somewhere to watch it).

Edited for spelling error. Yeah. I’m a writer. Why do you ask?