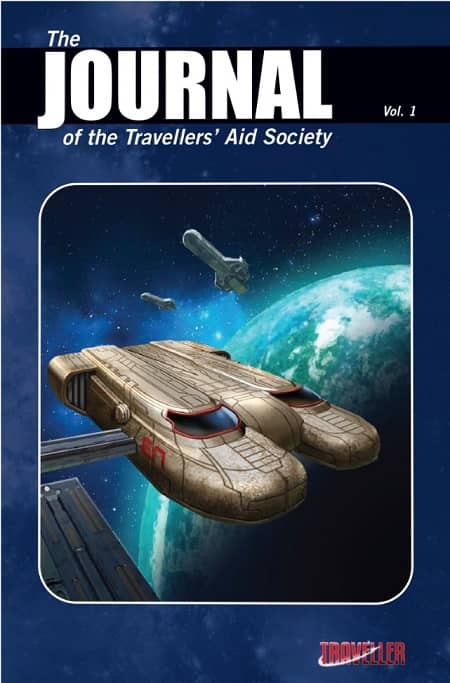 Traveller is a popular science fiction role playing game originally released in 1977 by GDW. To support its community of gamers, GDW published The Journal of the Traveller’s Aid Society (JTAS) from 1979 to 1985. (JTAS saw subsequent revivals for later versions of Traveller.) In 2019, Mongoose Publishing — publishers of two editions of Traveller — Kickstarted a three-volume revision of classic JTAS articles, intended for their second edition rules. Additionally, they would incorporate some new material and also mine some fanzines for articles. They Kickstarter was a success, eventually unlocking six volumes. Volume 1 has been released digitally (hard copy to follow) for sale to non-Kickstarter backers.

Volume I is 128 pages and includes two adventures, two new alien PC races, seven creatures, seven vehicles, two starships, eight articles providing background and fluff, and several items beyond that. The table of contents is organized by article type, making the job of finding those stats for the burst lasers easy.

The meat of this volume is in the eight articles broken into two sections: Charted Space and Travelling. Here, you can learn about a typical Imperial megacorporation, SuSAG; a listing and short description of the emperors of the Third Imperium; a history of the Vilani, the human race responsible for establishing the First Imperium; piracy — whether of the Vargr Corsair nature or what generally works for piracy in the Spinward Marches — an interview with the K’kree ambassador to the Imperium; a tutorial on smuggling; and an overview of the Gazulin starport. The topics covered do not provide new rules (with the minor exception in the smuggling article). Rather, they are intended to provide background and information to add flavor and hooks to your games, along with providing a quick bit of history for the Traveller default setting of the Third Imperium.

The article describing the Third Imperium emperors states the value of the list:

In the 1,100 years since the assumption of Cleon I, the Emperor’s List has been a convenient reference to the events in the growth and development of the Imperium.

The smuggling and piracy articles provide straightforward accounts of what crews engaged in those activities need and how to operate to be successful. A referee can use them to help add details or complications for their PCs or NPCs. The smuggling article offers a few additional starship equipment options as well — things like Fake Drive Components and Faux Cargo Modules to aid smuggling operations.

More directly applicable to PC interests are two additional playable races: Dynchia and Girug’Kagh. More players will be drawn to the Dynchia given their proximity to the Imperium. They are a humanoid species with little interest in territorial acquisition with a strong clannish societal base. The Dynchia have a reduced Strength characteristic (represented by rolling 1d6+3 instead of 2d6) but gain automatic plus 1s to Dexterity and Education. They also possess two traits: Mature Technology and Warrior People. The former is quite interesting. This trait allows a Dynchia with access to a workshop to modify any device up to Tech Level 12 and improve a part of said device by 10%. Examples provided include increasing a weapon’s ammo capacity by 10% or granting a g/bike 10% more top-end speed. 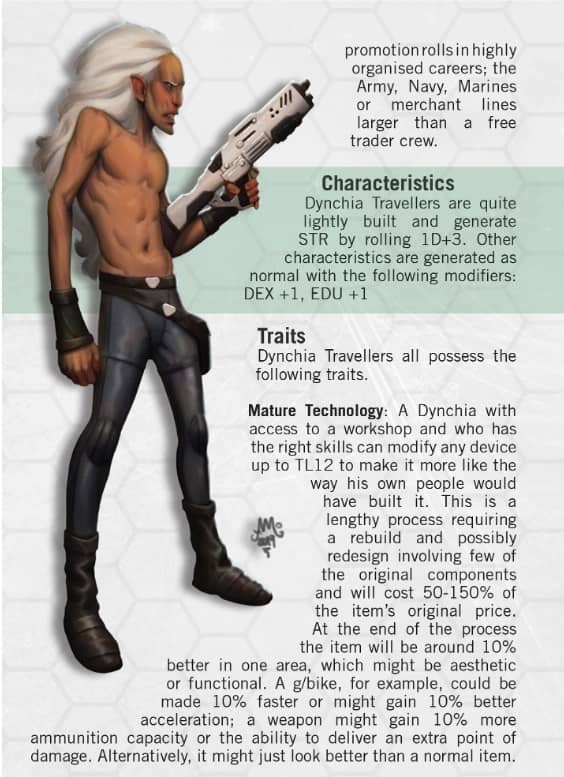 The Girug’Kagh are less likely to be played by players — at least with the description as written. The Girug’Kagh are a subject race of the K’kree (the related article “Within the Two Thousand Worlds” is an excellent introduction to this major power) and, as such, are almost never acting as travellers in the Traveller setting. Unless, that is, the player provides an interesting background for such a character regarding their escape from K’kree servitude, which would be quite interesting. Girug’Kagh tend to see the K’kree as a superior species and other races as less than. Girug’Kagh PCs have lower Strength and Endurance characteristics, rolling 1d6+2 instead of 2d6. However, they roll 1d6+7 for Dexterity. Many Girug’Kagh act as translators for the K’kree, and a table of additional skills acquired for PC Girug’Kagh is provided for character creation.

“Sternmetal Horizons “wants a freelance team to quietly retrieve the survey data they were carrying. This means diving in a wreck of a local passenger steamer in a region where the government has lost control to guerrillas.”

This is a classic Traveller set up where the scenario has a number of different actors with contrary motives, loose parameters, and tons of PC freedom to find the best path forward.

“Embassy in Arms” is a rescue mission. On the planet Aramanx, a balkanized world with two nations heading for war, an embassy is besieged by rioters. The Travellers are tasked with infiltrating the country of Lovrenyi and evacuating the embassy staff of the rival country, Lanax. If the Traveller mess up and make the wrong choices, they will spark a war that could devastate the countries and planet. Succeed, and the Travellers will help the two countries avert war and save some lives in the process. While more military in tone, combat is not a requirement. 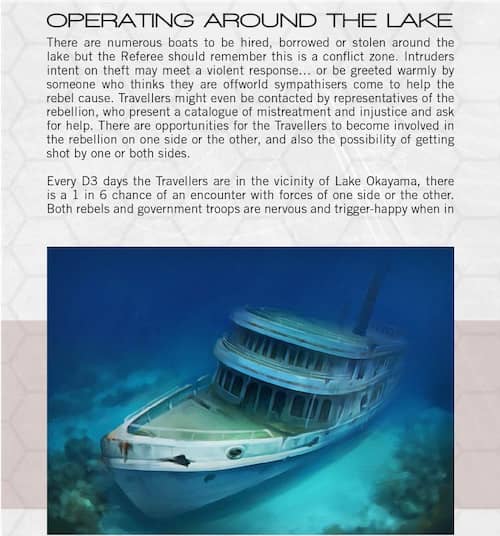 The reader will also find several vehicles statted out. Two primary vehicles are used as a basis for variants: ATV and Light Patrol Vehicle — which have four-wheel, large, grav-assisted, and aquatic ATV variants and a Light APC variant, respectively. Each vehicle receives comprehensive coverage with descriptions, usage, and images. These are vehicles ready to use in many adventures and campaigns (this referee is already finding a use for the ATV.) 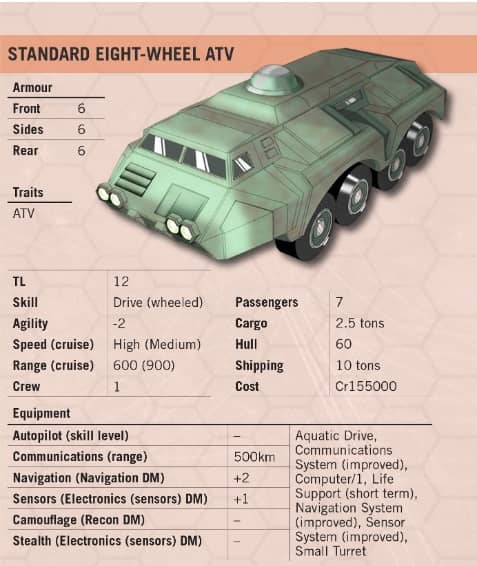 What’s Traveller without starships? Readers will find two in this volume: the Soho-class light freighter and Delphinus-class starliner. The freighter is a variant of the popular Marava-class far trader, optimized for self-defense in systems without much in the way of protection against piracy. The Delphinus-class starliner is a bit of an oddball ship. A luxury starliner, though it carries few passengers, whose claim to fame is the ability to function as a submarine to provide some thrills for its high-paying passengers. 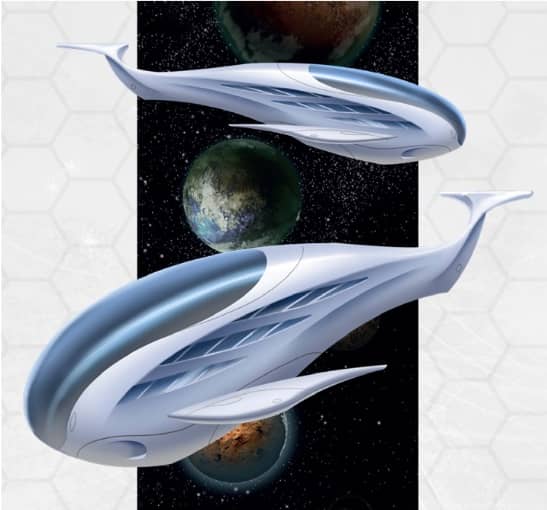 A bestiary provides details on seven creatures from Charted Space, from the Bush Runners, who resemble small dinosaurs, to the geneered Miniphants (originally Terran Indian elephants) for low-technology colonies, to Seedspitters, a frequent pet aboard starships. Of the four others, perhaps the most interesting from a referee’s perspective is the Luugiir, which looks a bit like an airborne jellyfish. Wild Luugiirs have poisonous stingers for self-defense—the toxin of which is fatal to humans. Domesticated Luugiirs have these stingers removed, but an enterprising referee could use them as a tool for assassination or murder. 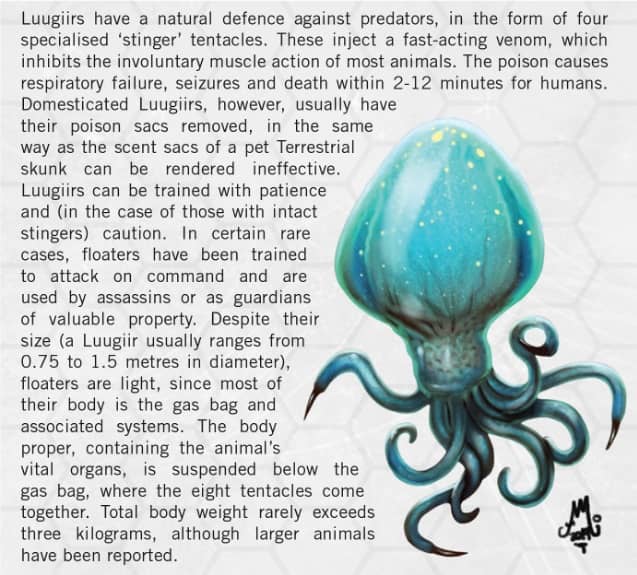 The volume also includes a few articles for additional weapons (burst lasers for starships and the assault rocket launcher), a remotely piloted recon robot, and an NPC, Simone Garibaldi, with enough hooks to hang an adventure or two on. One of the features I like with the articles is the effort made to connect them. Sternmetal Horizons appears in the adventures. “Smuggler’s Luck” specifically talks about the Soho-class light freighter as a good ship for smugglers. The Kforuzeng Vargr corsair group serves as the example in “Vargr Corsairs” and appears in “Embassy in Arms.” These subtle touches are evidence of careful and thoughtful selection of the articles and their revision.

Journal of the Traveller’s Aid Society, Volume I, provides a good mix of fluff and in-game options for the dedicated Traveller referee and player. Seeing classic articles revived for modern rules is exciting for long-time Travellers and a great way to introduce newer players to the rich history of Traveller going all the way back to the 1980s.

Patrick Kanouse encountered Traveller and Star Frontiers in the early 1980s, which he then subjected his brother to many games of. Outside of RPGs, he is a fiction writer and new convert to war gaming. His last post for Black Gate was a review of the Cyberpunk Red Jumpstart Kit. You can check out his ongoing, play-by-post, referee-less Traveller game at basiliskstation.blogspot.com. Twitter: @patrickkanouse. Facebook: www.facebook.com/patrickkanouse

Membership in the Traveller’s Aid Society was always one of my favorite “mustering out” benefits at the end of Character Generation. Nice to see that the RL Journals are coming back into print. Hope that new material starts to make it into future Journal issues!

I always loved that benefit as well. Made great use of it games. Thanks for the comment!

One of my prized possessions is a set of the original edition reprints from FAR FUTURE ENTERPRISES, which includes three volumes of Journal reprints. They’re beautiful volumes, and still available in the collector’s market. Here’s a look at the first one. 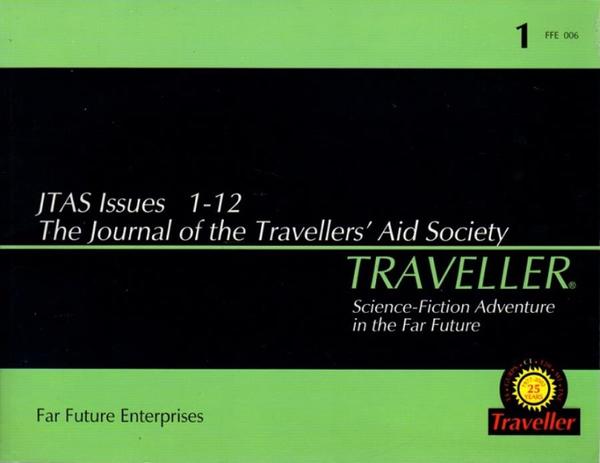 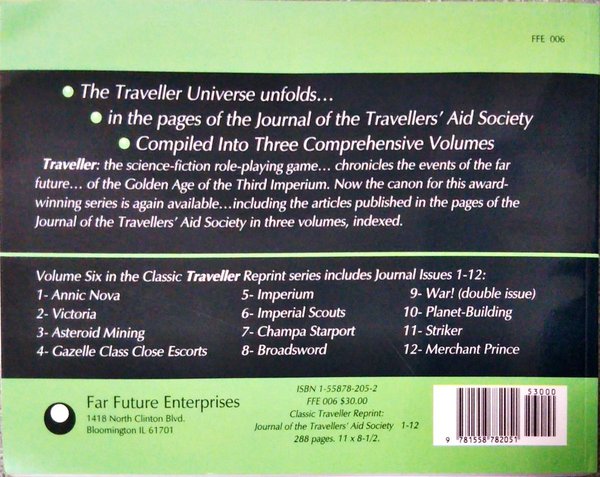 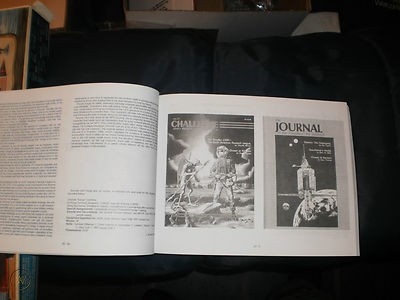