The World of Science Fiction: The History of a Subculture (Del Rey, November 1979)

Lester del Rey is one of the most important figures in the long history of Science Fiction. Along with his fourth wife Judy-Lynn del Rey, he was the editor at Del Rey Books, the hugely successful fantasy and science fiction imprint of Ballantine Books, from 1977 until his death in 1993. He wrote the long-running The Reference Library review column in Analog magazine, and was a member of the Trap Door Spiders, the New York supper group that was the basis for the Black Widowers, Isaac Asimov’s fictional group of dining detectives. But he was also a gifted writer, author of over three dozen novels and collections.

But I think my favorite book by Del Rey is his non-fiction SF history The World of Science Fiction: The History of a Subculture, written in 1979, which looked back at fifty years of genre history from 1926-1976. This is an entertaining and embracing read for true SF fans, one which wraps us up in a warm hug and lets us know we’re not alone in obsessing over obscure stories published in Galaxy magazine in the 1950s.

The World of Science Fiction is not an objective history of SF. There’s plenty of those out there — and besides, that’s not what we want or expect from del Rey. This is the story of an enormously successful publisher, the man who published the first true bestselling science fiction book in North America in 1977 (The Sword of Shannara, by Terry Brooks), yet who remains a steadfast fan in his heart. A man whose primary emotion, as he sits atop the publishing empire he built with his own hands, is ill-concealed resentment that it took so long for the rest of the world to finally accept the genre he loves. 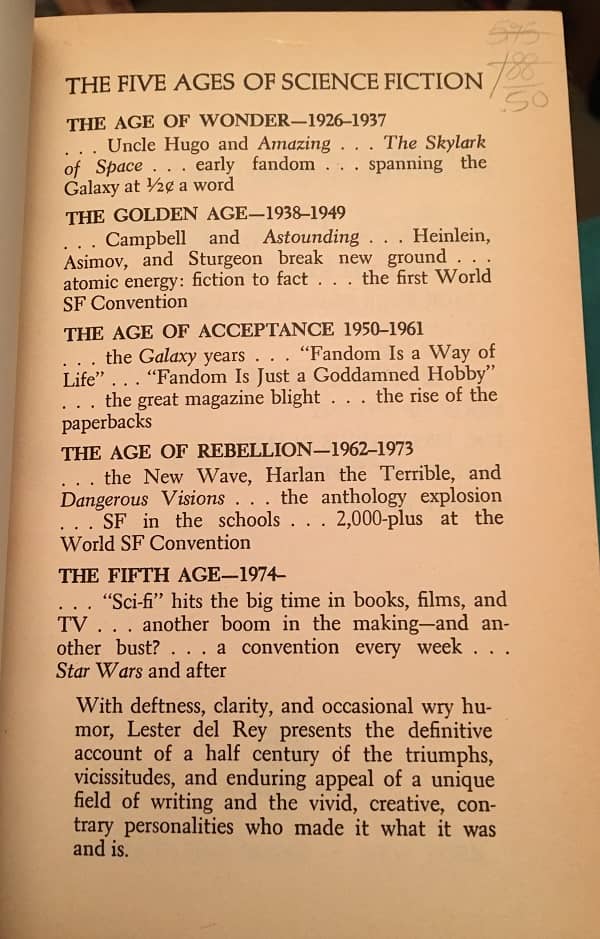 Inside cover copy for The World of Science Fiction

This is not a very in-depth book, though I think that’s one of its strengths. Del Rey covers five very full decades in five parts, and he moves quickly through a lot of history to do it:

The first four sections are roughly 60 pages, give or take, though the last is much shorter. There’s also an opening Foreword and Background section (covering “What Science Fiction Is,” “The Rise of the Pulps,” and other basics,) and a closing Part VI titled Parallels and Perspectives, which includes some thoughtful ruminations on the field, with chapters on Fantasy, Buck Rogers and Mr. Spock, asking But What Good is It?, and After Star Wars.

Each section covers a lot of ground, and Del Rey endeavors to be thorough, hitting all the highlights for each decade. The result is pretty much what you’d expect — he doesn’t linger too long on each topic. If you’ve come here looking for a detailed history or study of your favorite writers, you’re in the wrong place.

What we get instead is the equivalent of a fast-talking tour guide for 20th Century SF, one who’s determined to make sure you don’t miss anything. This is a marvelous resource for anyone who’s interested in knowing what fans were talking about in the 30s, 40s, 50s, and 60s. Who were the writers getting all the attention? What stories turned heads? What magazines were everyone reading, and why? 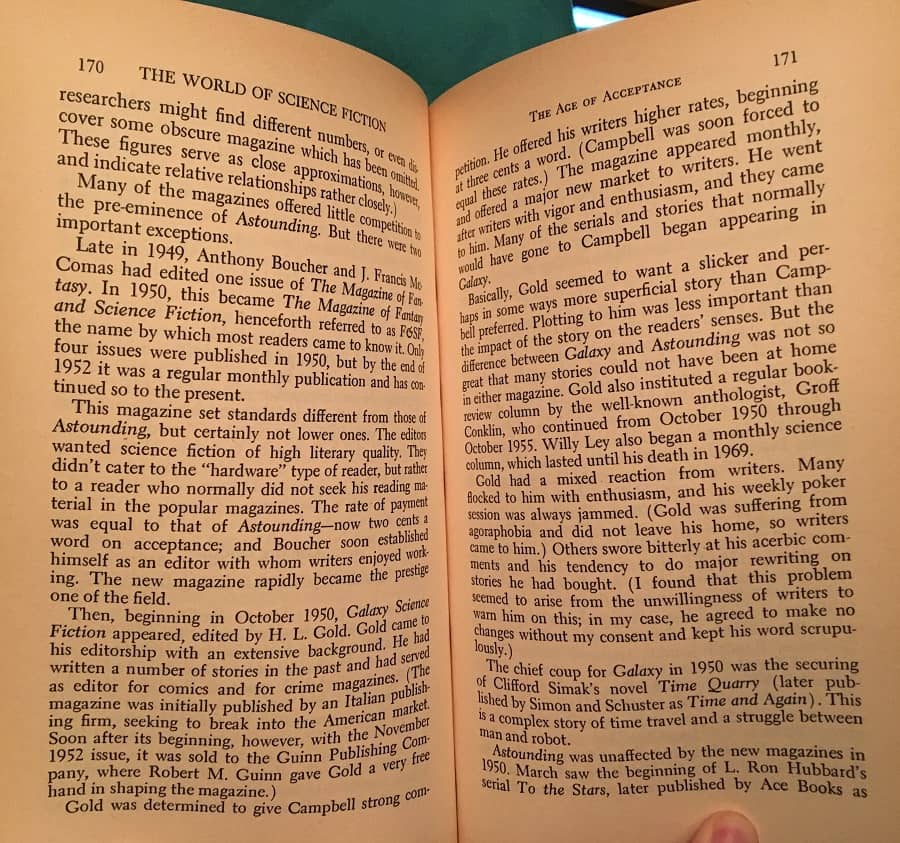 I’m a little conflicted on the results. I wish this book were a bit more rewarding for casual readers, or young fans who want to be introduced to the deep history of science fiction. Del Rey moves so quickly through his many topics that I fear it’s all likely to be a blur.

But for those of us with at least a passing knowledge of the subject, it’s pure gold. To tell the truth, I don’t think I’ve ever read The World of Science Fiction cover-to-cover. Every time I pick it up, I end up scurrying off to find a copy of Roger Zelazny’s “…And Call Me Conrad,” or Larry Niven’s “The Coldest Place,” or some other piece of classic SF.

Dipping into this book is like resuming a long-running conversation with a magnificently well-read fan with impeccable taste, one who delights in steering you towards overlooked gems. I’ve lost count of how many times I’ve come back to it, and how many great tales it’s reminded me of, or pointed me towards for the first time. If you love science fiction, you’ll find del Rey is an enthusiastic fellow traveler, one whom you’ll be very glad you struck up a conversation with. 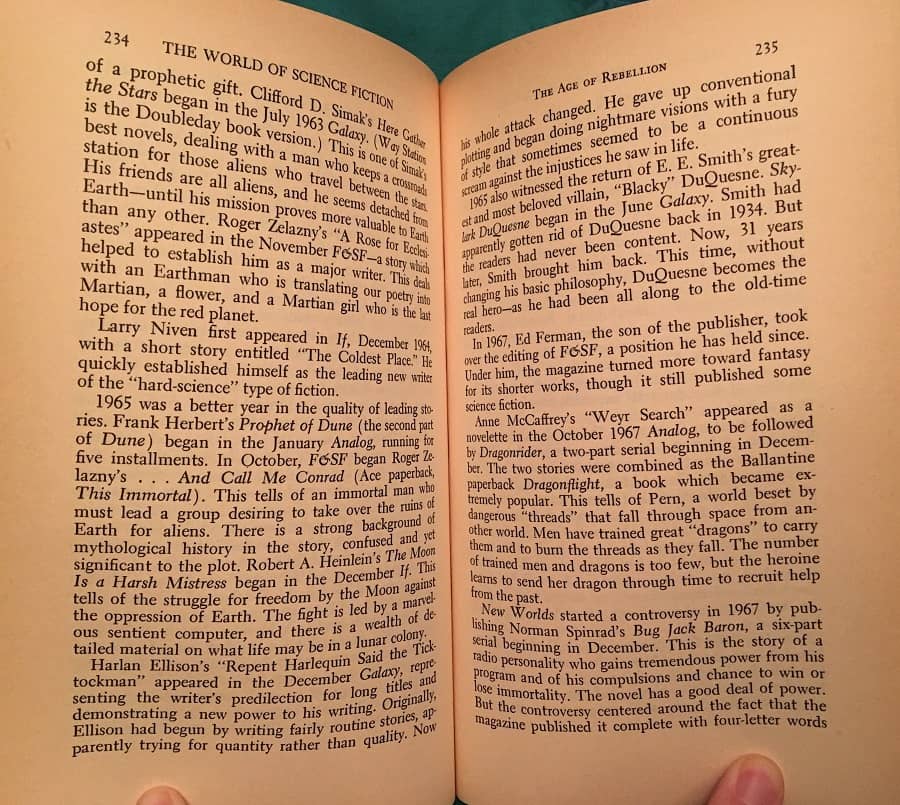 There are no books that tell you what’s awesome about SF in 1965. Except this one.

Mind you, Del Rey isn’t very controversial, at least not on the page. Whether that was true of the man himself, or simply a a conscious choice he made for a mass market genre history, I couldn’t tell you.

But the fact is he generally sticks to the usual script. John W. Campbell single-handedly created the Golden Age, Harlan was the Angry Young Man, Heinlein was the Best, the New Wave was… well, we’re still working that out. There’s very (very) little attention paid to women and non-white creators in SF. You could say Del Rey was a product of his time, but that excuse is wearing a little thin. He should have known better. 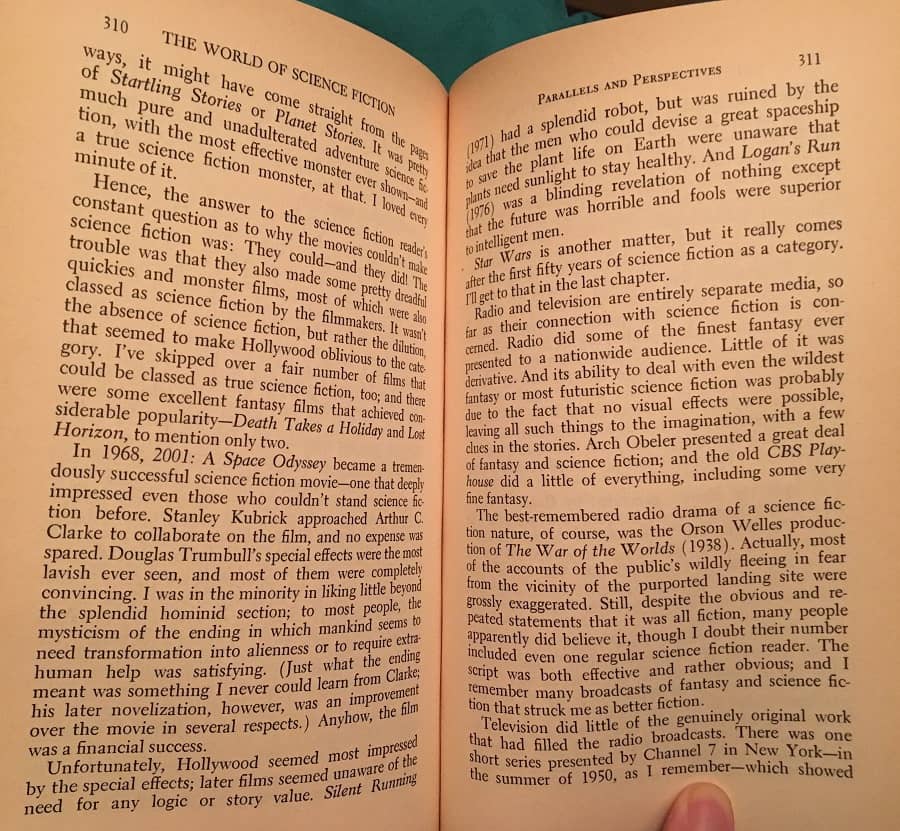 For all that, I still very much enjoyed this book. It’s warm and cordial, and talks appreciatively of Del Rey’s competition in the industry, like DAW, Ace, and others. This is clearly the work of a man who’s a genuine fan first, and not a publisher trying to promote his own success. That’s no small thing.

This book is a very solid addition to the fan-written histories and memoirs, such as Arthur C. Clarke’s Astounding Days, Damon Knight’s The Futurians, Frederik Pohl’s The Way the Future Was, and Sam Moskowitz’s Classics of Science Fiction library, including especially The Immortal Storm. 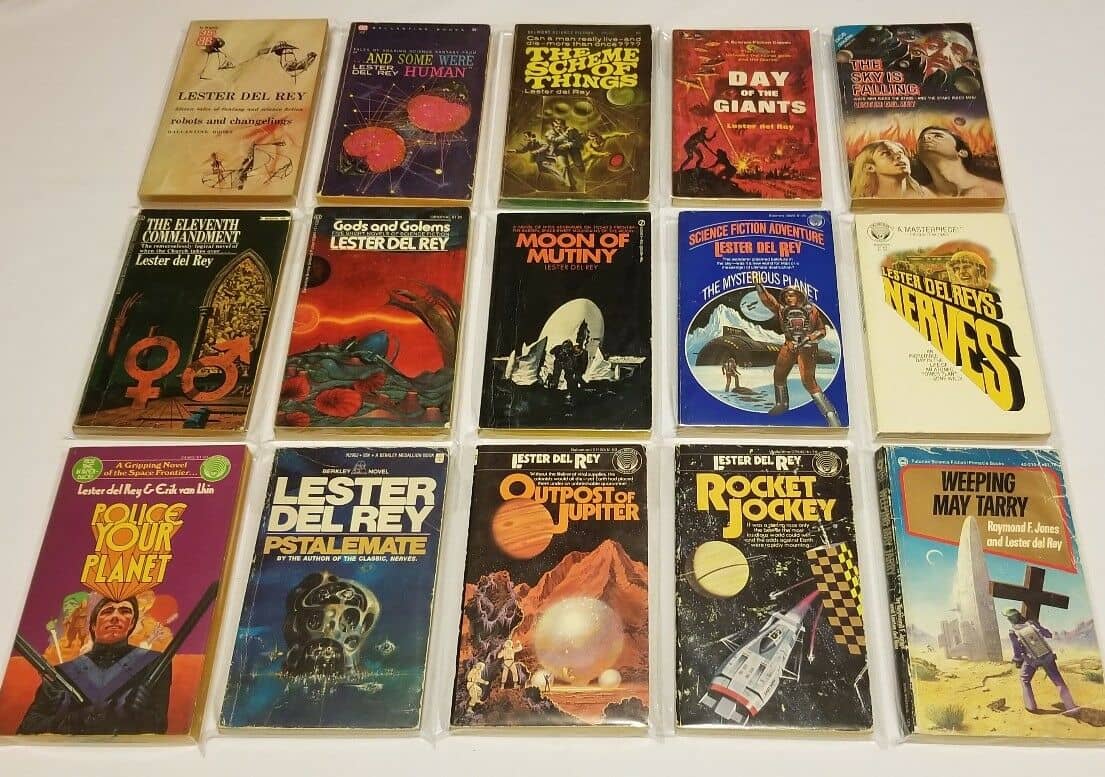 A sampling del Rey’s many SF novels and collections

The World of Science Fiction: The History of a Subculture was published by Del Rey in November 1979. It is 416 pages, priced at $5.95 in trade paperback. It has been out of print since 1980, and there is no digital edition.

Copies aren’t expensive or hard to find. They start at $1.25 in AbeBooks.

John,
I must mildly object to your characterization of Lester as “There’s very (very) little attention paid to women… He should have known better.”
The book is a generalized overview, not a detailed history as you note and Lester had this to say about women authors in it: “and, finally:

One major change in the field, however, was more than welcome. This was the emergence of many new women as writers of science fiction.

…science fiction had generally been the province of the male writer, like most forms of adventure fiction.

Suddenly, in this period, a great many women began writing and achieving success in science fiction.

Of all the changes going on in the field, this evolution was probably the healthiest and most promising to the future.”

From an article on Lester’s Boom and Bust cycle theory, which is covered in this book and in a column from Analog -https://amazingstories.com/2016/08/boom-bust-lester-del-reys-12-year-cycle/

While “little attention” is subject to interpretation, the fact is, Lester acknowledged the presence and influence of female SF authors at a time when even a mention was uncommon.

That’s a great quote! Thanks for sharing it. I’m at work and I don’t have my copy of the book in front of me, so I can’t confirm that quote is in there, but it’s certainly in that online article.

It’s great to see del Rey acknowledge women in SF. I do wish there was more actual coverage of women in the book, though (especially Le Guin, Anne McCaffrey, Katherine MacLean, C.L. Moore, C.J. Cherryh, Andre Norton, etc.) Still, as a publisher Del Rey published a great many women, and his record is FAR better than most.

I”m sure you’ll find it, lol, as I was quoting directly from it when writing up the 12 year cycle thing.
Lester was a personal friend (for several years in the 70s) and I never knew him to be anythng but fiercely progressive in his thinking.

For what it’s worth, del Rey signed the anti-war statement in Galaxy. I’m referring to the two facing statements that appeared in Galaxy in 1968, one supporting and one opposing the U.S. war in Vietnam.

As it happens, academic-publisher Routledge just reissued this in November 2022 in hardcover, paperback, and ebook formats, albeit in very pricy editions: https://www.routledge.com/The-World-of-Science-Fiction-1926-1976-The-History-of-a-Subculture/Rey/p/book/9780367748968

Again, I’m a few years late to this discussion, but I appreciated this post. I first spotted this book in high school, and finally had a chance to read and enjoy it a few years ago.