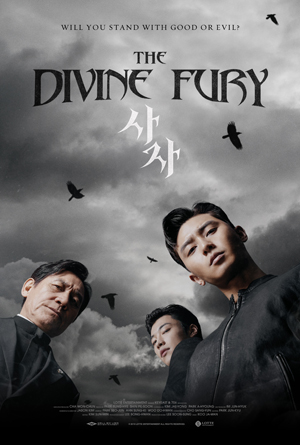 All good things must come to an end, they say, and for me Fantasia 2019 ended at the Hall Theatre with the Korean action-horror movie The Divine Fury (사자, romanised as Saja, literally Emissary). Directed by Kim Joo-hwan, it follows Yong-hu (Park Seo-jun), a champion MMA fighter who lost his father under mysterious circumstances at a young age. In the present, when mysterious wounds appear on his hands and he is attacked by a demonic force, a blind shaman guides him to exorcist Father Ahn (Ahn Sung-ki), who tells him the wounds are stigmata and give him great power in fighting demons. The two team up, reluctantly on the part of Yong-hu, who holds a grudge against Christianity after the death of his father. But there are dark forces at work in Seoul, and Yong-hu must use all his skills to defeat the forces of hell on earth.

There are a lot of good ideas in this movie. And a lot of the time it looks very nice, with lovely shots of Seoul by night, and glossy, richly-coloured cinematography. Unfortunately the action and horror elements are not blended well, and character beats don’t come off as powerfully as they should.

Let’s start with the action bits. After a long introductory sequence showing Yong-hu as a boy and the death of his father at the hands of demons, we get our first fight. Note that the intro’s failed to build any real narrative momentum, and even the appearance of the demon is only brief. The actual fight we see with the adult Yong-hu looks like it’ll be more exciting; but then it too ends quickly. There is a plot reason for this, but the scene sets a pattern for the rest of the film. Yong-hu finds himself battling demons, and his power ends each exorcism before any real sense of dread can emerge. The set-pieces are thus brief and don’t develop into anything significant, even when plot’s being advanced.

The climax is easily the most kinetic and visually interesting sequence of the movie, a well-shot brawl that does have its own internal structure: Yong-hu defeats some flunkies to make his way to the boss, and then both hero and villain level up as the fight goes on. The problem is that the combatants don’t have anything to say to each other, literally and figuratively. The spectacular visuals feel empty, as Yong-hu doesn’t seem to be dealing with any particular character issue in the fight. The staging’s fine, but there’s no particular sense that there’s an internal logic that dictates when Yong-hu’s done enough to end the conflict. Basically, there comes a point when he hits the bad guy enough that the bad guy goes down and stays down. 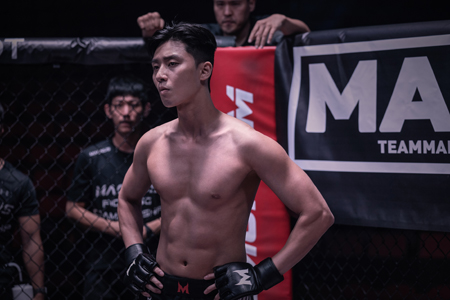 So much for the action. As a horror movie The Divine Fury has a little bit more to say. The imagery recalls some of the classic American horror films; two exorcists struggling against a demon that’s possessed a young woman in her mother’s home can’t help but be a little familiar, and there is a sense that the movie’s not only conscious of its homage, but is in fact drawing some energy from being in dialogue with its predecessors. The mechanism of possession and the struggle of Father Ahn against demons is well drawn; Ahn seems to live in a series of hotel rooms, wandering the world at the behest of the Vatican, battling Satanic agents. The movie does a good job of showing us just enough of his life, and just enough of the struggle he’s engaged in. We know enough to be horrified, but not enough for the horror to turn into mere plot mechanics.

At least in theory. The problem is the action-movie elements undercut any real sense of horror. Yong-hu can defeat any demon easily enough, so the battles come to feel hollow. Exorcisms are unthreatening. Suspense never builds. I note that the climax drops any attempt at building a horror atmosphere in favour of a straight super-hero punch-up, and that may have been for the best.

Watching the movie, I was oddly reminded of the basic problem with the original Ravenloft module for Dungeons & Dragons and to an extent some of the Ravenloft supplements which followed. I loved reading the module (in case anyone doesn’t know, it’s a massive castle and dungeon complex which players must explore to destroy a master vampire — er, spoilers for 1983’s module I6 Raveloft, I suppose). But I could never figure out how to run it as effectively as I imagined the story of it in my head. The point of Dungeons & Dragons is that the player characters are powerful warriors, master wizards, and so forth. They have considerable agency, resources, and power. They’re not going to be scared by a few zombies or animated skeletons. Something like Dracula was terrifying because the vampire was mysterious, with powers far beyond the heroes. But in a typical D&D story the heroes have powers to match the villain; the sense of horror greatly recedes. Dracula’s not frightening to Conan and Gandalf. 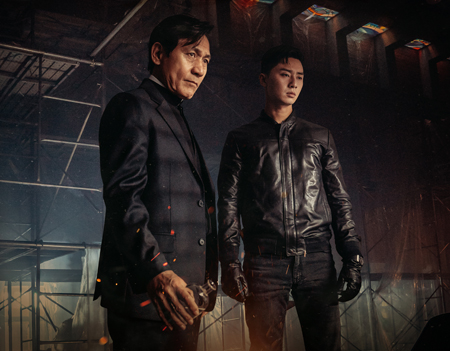 So it is here. Yong-hu’s a solid enough character, but doesn’t grow much through the film; on his own, he’s not really engaging enough to hold one’s attention for two hours and change. Ahn is more interesting, with a certain gravitas and world-weariness. It may not be surprising that his part of the story is more dramatically engaging. And there is a certain energy that comes when the two characters interact, as the life of a down-at-heels exorcist runs into the glitzy world of a martial-arts champion.

There are fine things in The Divine Fury. The soundtrack’s quite solid. And as I said before, there is a rich look to the movie, capturing the slickness of an upscale if demon-haunted nightclub as well as the contrast of light and dark in a cityscape at twilight, while the production design brings out the shadowy feel of an old convent, the mundane sense of a middle-class apartment, and the anonymous place-between-places feel of a room in a hotel chain. But the drama doesn’t work. The central conflict’s underwhelming, and the set-pieces that should be major elements of the film don’t land. There’s an excellent idea for a movie here. But it doesn’t come together. A post-credits sequence reveals that this is an attempt to start a cinematic universe, spinning off characters into other films; perhaps the creators will learn from this one.