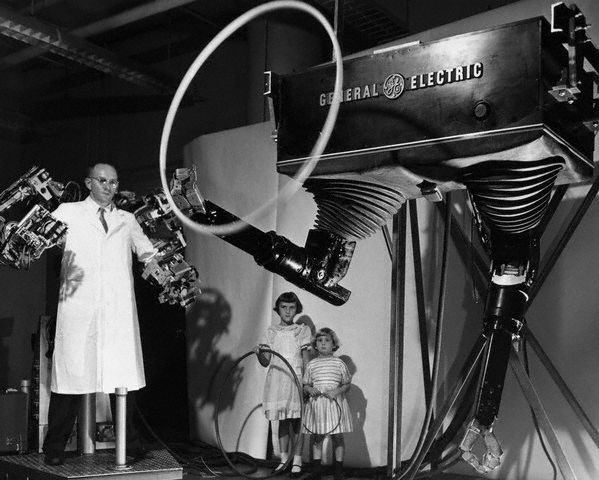 Who was the first to land on the moon? A man? How could he? Even the most “steel-like sinews” would shrink before the magnitude of the task. Only a robot, whose “sinews” were literal steel, could stand up to the crush of 50G’s during acceleration. Only a robot could stand up to the moon’s harshness. That was the idea of moon-obsessed Emil Peters, confined to a wheelchair after a childhood injury, for whom “standing up” by proxy was a lifelong dream.

“My proxy, [he explained], thanks to radio, possesses both voice and hearing. Radio television provides it with sight; that is, it enables me, sitting in this chair, to see through its artificial eyes. Radio telemechanics, or wireless control at a distance, guides its legs, arms – in fact, every movement of the body.”

“To the Moon by Proxy,” by the young writer Joseph Schlossel, appeared in the October 1928 Amazing Stories. A mere three decades later, General Electric had the same thought, unveiling “a science-fiction robot that it said conceivably could be the first ‘man’ on the moon.” And then another, and another, a string of proxies and exoskeletons that promised to allow humans to become virtual superheroes.

Ralph Mosher was born in 1920 in Watervliet, NY, a suburb of Albany and a short drive from one of America’s great centers of industrial excellence, General Electric’s giant industrial park in Schenectady. As with so many of his generation, he started his career late, at the age of 30, after service in WWII and a BSME from the University of New Hampshire. Fulfilling some historic inevitability, his career launched at that General Electric research laboratory. History, poking me in the shoulder, also demands mentioning that he worked in close proximity to a publicist for the research lab who had a similarly postponed career, Kurt Vonnegut Jr., who left GE only after writing a prophetic novel set at the plant, his 1952 Player Piano, a warning about automation.

Mosher, on the other hand, clearly loved automation. In 1956 he got assigned to work on manipulators, basically waldos on steroids, for military use on such projects as the B-72 nuclear-powered aircraft. Mosher created the Yes Man, “the most dexterous mechanical slave ever developed.” Life magazine added the requisite-at-the-time pretty girl to humanize the technology. 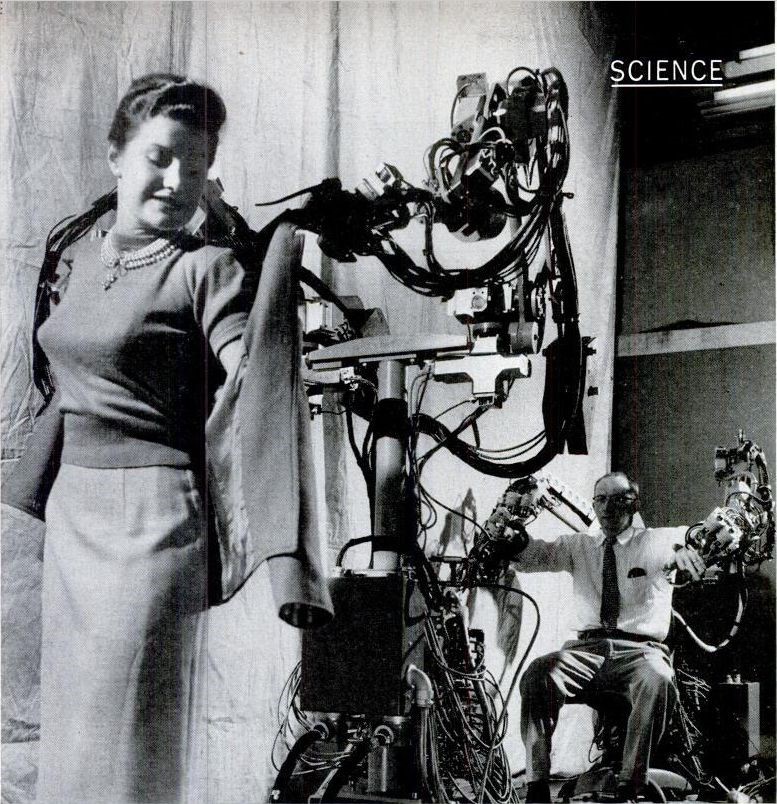 The disembodied device graciously helping the girl with her coat (above) is one of the most dexterous robots yet designed. Its arms have elbows that bend, wrists that swivel and three-clawed hands. Still being perfected by G.E., it is an electro-mechanical slave called the Yes Man which does the bidding of a human master who acts out the desired motions in pantomime. Attached in the master’s hands are a pair of arms matching the robots. When the man moves his fingers, electric signals activate hydraulic pistons which move the Yes Man’s claws the same way. Through a feedback system, the operator can feel what the robot is doing. Yes Man has a serious purpose. By watching it through TV, a technician sitting some distance away could safely guide the Yes Man through intricate tasks in an atomic laboratory.

Officially and in formal contexts, such a device was referred to as a “cybernetic anthropomorphous machine” or CAM. (Mosher was a rare engineer with no advanced degree to be asked to write a Scientific American article, “Industrial Manipulators.”) CAM was short and punchy but not friendly. The GE public relations successors to Vonnegut had better ideas. At its debut pres conference in 1959, GE had Mosher introduce “Handyman” (shown at top) twirling a hula hoop in front of bemused schoolgirls.

Handyman had a new set of abilities.

Unlike most previous industrial robots, Handyman was capable of actual tasks, like steadying a block of wood with one claw while the other holds a hammer to drive in a nail. 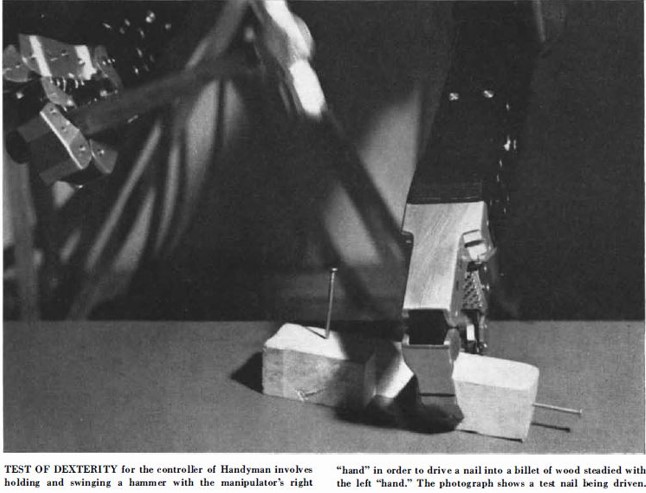 Handyman wasn’t exactly mobile. Designed to be used with a series of wires running through concrete walls at a nuclear plant, it weighed 550 pounds and required counterweights to allow the operator to maneuver it. GE put it into production at some of its own facilities but the concept needed too much refinement to be taken elsewhere.

Mosher’s triumph was in his force feedback system. An internal GE document explained the concept in cartoons, a sure sign that the technology was too new to be familiar.

Just as a crank forced a perfect circle out of clumsy human movement, the mechanisms inside the arm forced the wobbly human arm to a set of controlled motions. Reports by users claimed that they could use the claws to pick up a pencil with the uncanny simulation of having their fingertips grip the wood.

Another of Mosher’s many projects involved the Man-Mate CAM 1600 industrial boom for material handling, which, according to GE, allowed “the operator to ‘feel’ the material he handles and react instinctively to it with the ease of lifting a lightweight object by hand. Basic to this ‘touch’ feature, they said, is a Sens-A-Lift, electro-hydraulic servo control system.” As always, Mosher got a write-up in Life magazine at the controls of the Man-Mate, which, as always, had military financing. (Henry Luce’s Life had extremely close ties to the government, acting as a semi-official mouthpiece. Its exclusive rights to interact with astronauts was a gift from the government in return. 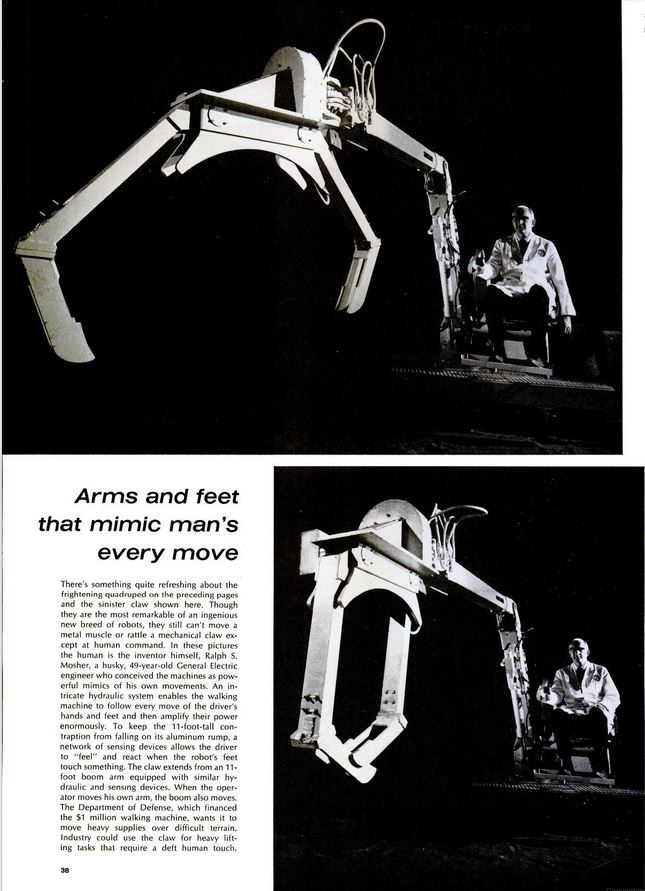 Man-Mate was so clearly industrial that GE apparently didn’t feel it had to disguise it with staged poses with pretty girls and children. The military, meanwhile, couldn’t disguise its concern that it wasn’t getting its money’s worth. All three arms, the Air Force, Navy, and Army, spent almost the entire 50s and 60s funding every future tech suggestion that the industrial half of the military-industrial complex proffered. The Army, already embroiled in the jungles of Vietnam, had fanciful visions about armored soldiers adaptable to any terrain. They went back to GE and Mosher, who created a full-body exoskeleton for them, the Human Augmentation Research and Development Investigation Manipulator, or Hardiman. 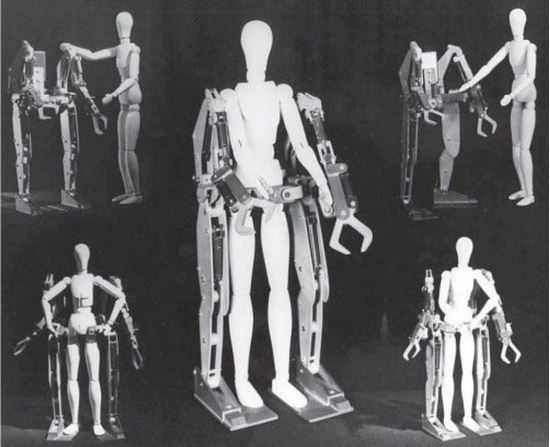 Hardiman gave the operator a 25:1 force ratio: a human exerting 60 pounds of force could lift 1500 pounds, ideal for loading heavy weaponry into aircraft. 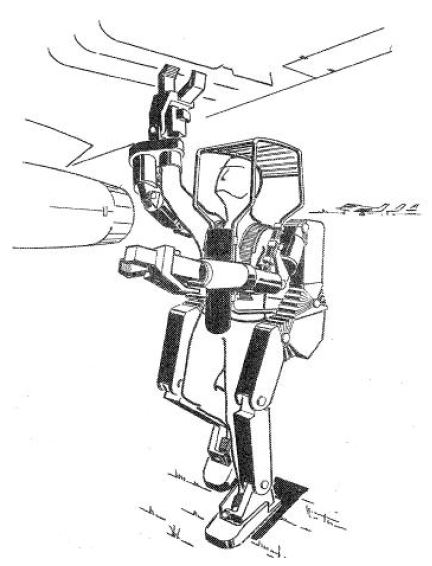 That’s not the way GE spun him, of course. Their PR crew morphed the bomb-loader into a smiling engineer who, in his hard hat, looks like a friendly lineman come to shove a tree off a downed power line and then pound the new poles in all by himself. 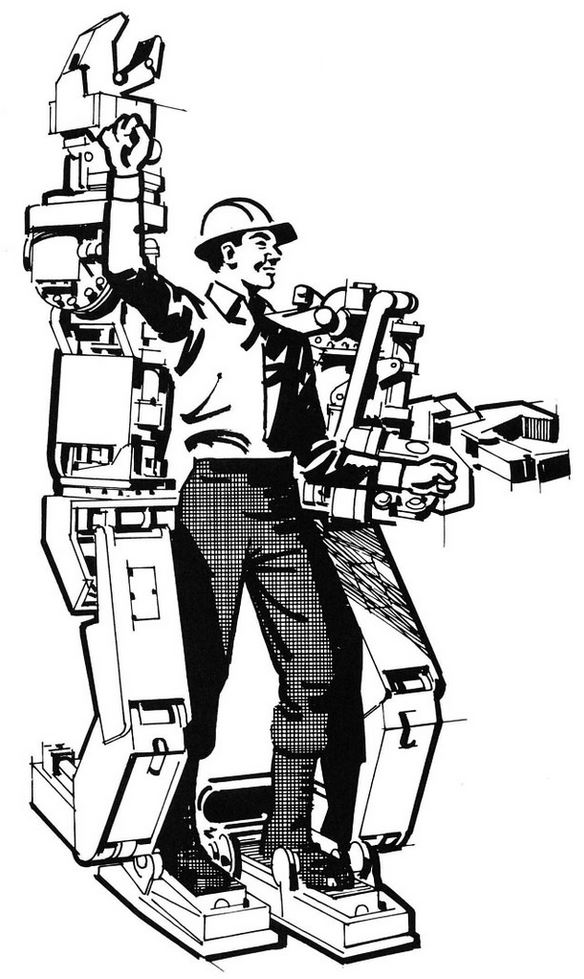 No full Hardiman ever made it past prototype. One arm with nine joints was built and successfully tested. 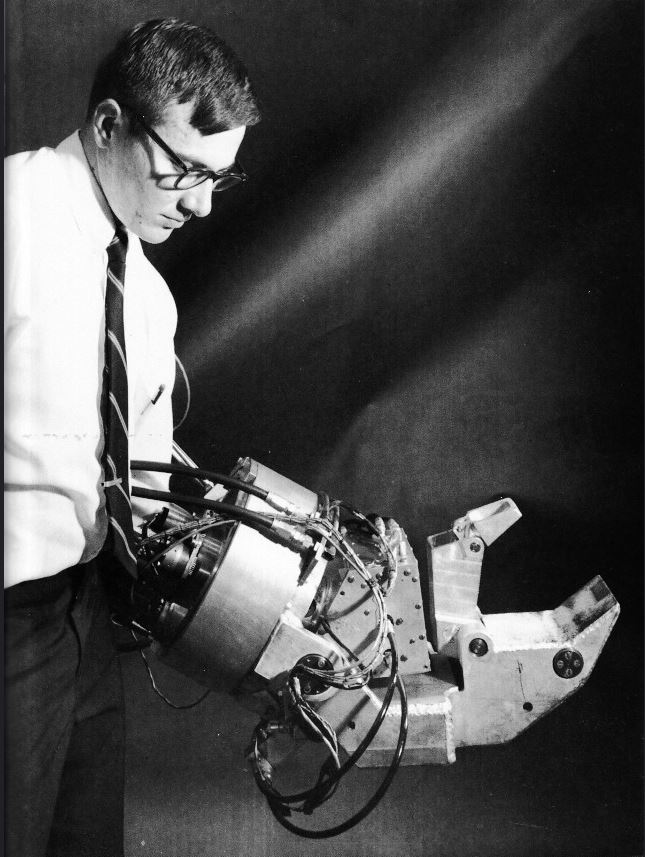 The legs, however, remained problematic. They couldn’t be stabilized without outside support. At the end of the six-year contract, the project was terminated.

No matter. By then the military had a full plate of CAM toys supplied by Mosher for them to play with, a reverse-Orwell: two legs good, four legs better. My next column will cover these, starting with the fearsome, comic-book-named Pedipulator!

Steve Carper writes for The Digest Enthusiast; his story “Pity the Poor Dybbuk” appeared in Black Gate 2. His website is flyingcarsandfoodpills.com. His last article for us was Arok the Robot His epic history of robots, Robots in American Popular Culture, is finally available wherever books can be ordered over the internet. Visit his companion site RobotsinAmericanPopularCulture.com for much more on robots.