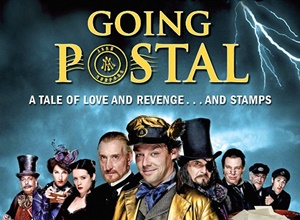 I think that the late Terry Pratchett was an elite satirist. He used humor in a fantasy world as the vehicle, which probably causes many to dismiss how good he was at writing satire. I’m a huge fan of the Discworld books, and I’ve written a post on the City Watch, and one on Troll Bridge, a short story featuring Cohen the Barbarian. I think an overview of the Discworld series would be a worthy post here someday.

Moist Von Lipwig is the protagonist of three Discworld novels: Going Postal, Making Money, and Raising Steam. In his first appearance (Going Postal), Von Lipwig is a con man who is finally captured and hung. Actually, he was only hung to within half an inch of his life. Lord Vetinari, the Lord Patrician of Discworld’s biggest city, Ankh-Morpork, I think that Vetinari is one of the best fictional rulers ever created.

Vetinari wants to reopen the city’s Post Office; an establishment that had essentially collapsed under its own weight – and greed. He gives Lipwig the choice of walking out a door (which the nearly dead man discovers opens onto an almost bottomless pit) or reviving the post office. Lipwig, who figures he can con his way out of things, reluctantly takes the job. There are, of course, many hurdles, including a golem named Pump 13 who ensures that he is not going to run away.

The Clacks are network of semaphore towers, that is Discworld’s pre-eminent communications network, with some internet overtones. The post office is brought back to compete with the unreliable, monopolized Clacks.

That’s the groundwork, and from here on in I’ll discuss the miniseries, which does differ from the book a fair amount, though it’s still faithful to Pratchett’s work. The Clacks is run by Reacher Gilt, played deliciously by David Suchet, the personification of Agatha Christie’s fat Belgian detective, Hercule Poirot (who you read about HERE, of course…). With long hair, an eyepatch, and evil to the core of his larcenous heart, Suchet gets to have fun with the character. The character is a bit more serious in the book, but Suchet’s portrayal works for the movie. 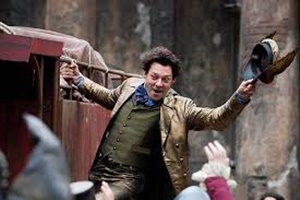 Lipwig is played by Richard Coyle, who I recognized from his one-season cameo in USA Network’s spy thriller, Covert Affairs (good show). Coyle’s performance might be a little more showy than that in the book, but if so, not by too much. And I think it fits the movie almost perfectly. I don’t think the part could have been cast much better.

He is still a con man, but in figuring out how to make some money (he invents stamps, which is just like printing money), he also restores the post office, while Gilt tries to stop him. Gilt’s rolling out of mobile Clacks is one amusing way he does this.

Lipwig inherits only two employees. The elderly Groat is played by Andrew Sachs. Sachs was a superb Dr. Watson in the BBC radio series’ starring the outstanding Clive Merrison. He took the role when Michael Williams passed away.

Charles Dance isn’t quite how I picture Vetinari, but he pretty much nailed the role. His understated dialogue and double-meanings are just like in the books. Pratchett has a minor part as an old postman.

Lipwig’s love interest is Adora Belle Dearheart, who runs the organization that hires out golems. Her father had invented the clacks but had the business stolen out from under him by Gilt. She doesn’t trust Lipwig but hates Gilt. She dresses entirely in black, smokes a Cruella de Ville cigarette, and greets visitors with a crossbow. Her stiletto heels are, well stilettos. 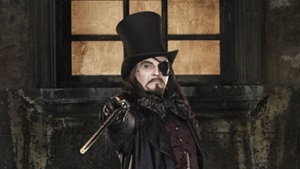 Gilt uses a banshee as a hit man, the power of words effectively haunts the post office, which has tens of thousands of undelivered letters, there’s a group working to sabotage the clacks, and Lipwig actually delivers the first letter himself. It’s very Pratchett-esque.

Themes like self-discovery, revenge, choices, and greed permeate the book and the miniseries. It felt like it was moving along rather slowly, but each scene was interesting to watch, so it wasn’t ponderous. Kinda odd, but it worked.

A lot was left out, and condensed, from the book (which was almost 400 pages in paperback). Not all of what was dumped would have been worth filming, so it didn’t do too much damage.

I couldn’t sleep one night, so at 3 AM, I watched all of part one, started part two, went to work, and finished it that evening. It was a good way to pass the time. I recommend it.

For some reason, the book was the first one that Pratchett broke into chapters. I don’t think it matters, but it is a bit of trivia. There were a few asterisked footnotes. I loved the many footnotes in the early books, but he eventually moved away from them.

Unseen Academicals was the thirty-third Discworld book (I don’t count the young adult novels), and it was the first I didn’t particularly care for. I’ve wondered if his daughter didn’t write a significant part of it, as he was battling his Alzheimer’s Disease. But the point is that I did enjoy thirty-two consecutive Discworld books – that’s how good Pratchett was.

In Going Postal, the early scene between Vetinari and Lipwig, who is still trying to cope with not being dead, is typical of the fun of reading a Discworld story.

Vetinari offers him the job of postmaster general.

“May I just add, Mr. Lipwig, that behind you there is a door. If at any time in this interview you feel you wish to leave, you have only to step through it and you will never hear from me again.”

Moist filed that under “Deeply Suspicious.”

They stood aside as Most walked toward the door, which, as promised, was indeed there. He opened it very carefully. There was nothing beyond, and that included a floor. In the manner of one who is going to try all possibilities, he took the remnant of the spoon out of his pocket and let it drop. It was quite a long time before he heard the jingle.

“There is always a choice.”

“You mean…I could choose certain death?”

“A choice, nevertheless,” said Vetinari. “Or, perhaps, an alternative. You see, I believe in freedom, Mr. Lipwig. Not many people do, although they will, of course, protest otherwise. And no practical definition of freedom would be completely without the freedom to take the consequences. Indeed, it is the freedom upon which all others are based.”

There’s a lot to unpack in there.

I liked some books more than others. But I’ve read all of them at least twice. Some four or five times, I’d guess. Pratchett is a great read. And Soul Music is a good book and a good two-part miniseries.

Bob Byrne’s ‘A (Black) Gat in the Hand’ was a regular Monday morning hardboiled/pulp column from May through December of 2018. And it returns later this month!

I’ve seriously thought about doing a Discworld see when I come back. Maybe as a sequence by sequence series, maybe chronologically, not sure.

Fletcher – The visual adaptations are hit and miss. And while I enjoy them more often than not, they are a far cry from the books, which I re-read fairly often.

I’m going to move on to Making Money, the next Lipwig book, when I finish my Going Postal re-read.